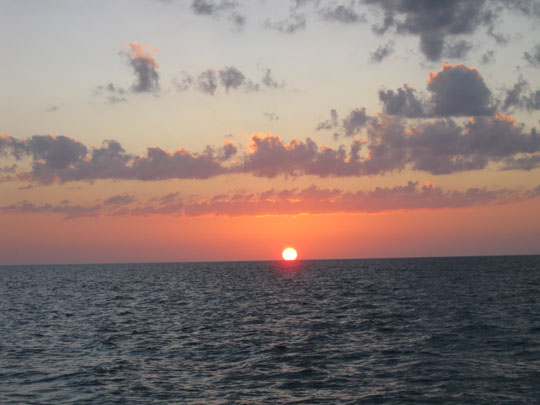 A beautiful Sunrise and all is well as we start our crossing to the Berry Islands.

The start of our crossing to the Berrys was pleasant enough. We were out of the anchorage by sunrise, and sailing eastward with a southerly 8 knot breeze, making minor adjustments to sail trim, making good progress, and asking each other Trivial Pursuit questions.

From my reading I thought the predicted conditions were good for a crossing. The prevailing winds are easterly. So if you are heading straight east it’s better to have the wind come from any other direction. A northern cold front was predicted. Our cruise guide said north wind was good for this passage. Other sources described the wind changes as ‘clockwork’. The winds ‘clock’ from south through west to north. Fair enough.

The wind started petering out around noon, and slowly turned to southwest by four. If it ‘clocked’ west I missed it. I was busy looking at the huge bank of clouds coming from the northwest. In a very short time the wind picked up and cooled down. 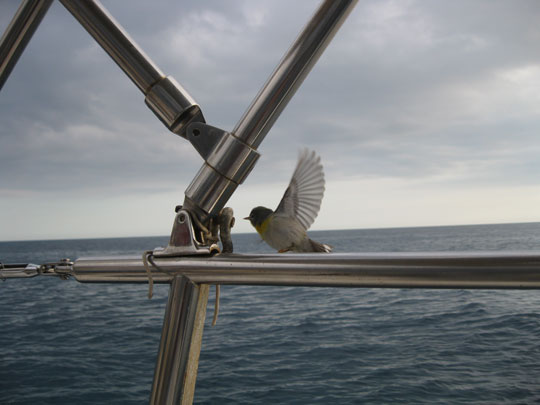 She was so sweet, but I think all the wind and the woman sticking a camera in her face was too much for her.

A tiny Bahama Yellowthroat warbler frantically flew out from under the clouds and perched with visible relief in the cockpit beside us. Now, I don’t mind a little bird poop in the cockpit, but when the wind got up to 20 knots she flew inside where she did not belong. I shooed her out, but she kept coming back in. In a few minutes the wind hit 25 knots and she could no longer keep up with the boat. No land for 30 miles in any direction. At least she wasn’t part of an endangered species (I checked later in our guide to birds of the West Indies).

For a while we enjoyed taking advantage of the wind. Duwan was at the helm. We discussed a couple of ‘obstructions’ that were in our path. They were not in our chartbook, but the GPS showed them as big blobs. There were no descriptions so we just decided to sail south of them.

After a while the motion of all the big waves got to Duwan. She became so seasick that she was horizontal for most of the remainder of the trip.

At night the visibility was poor. There were no stars. If there was a light on the horizon it appeared to jump in all directions. Now I like having a distant visible target to head toward. Then I can stay on course, but still react to minor things, like steering up into some nasty wave that’s about to break over the side. But this night the trick was to keep the boat bouncing between a couple of points on the compass and look at the GPS periodically to make sure we were on course.

The wind shifted to northeast, the direction we needed to go now. So I started tacking, or zig-zagging at right angles to the wind. While tacking back north I saw three cruise ships heading toward our destination. I was careful to stay a couple of miles south of the shipping lane.

All in all it was still a lot more fun than my old job, but I got tired about 3am and asked Duwan if she would steer and let me take a cat-nap. I came back up about 4am, but quickly went back below to find warmer clothes. She continued steering and yelled out the locations of garments for me. (I had forgotten where the warm stuff was. Don’t you just wear swimsuits in the islands?)

Back in the cockpit I asked if she wanted me to take over. When she finished throwing up she said ‘yes’.

We were approaching the point where land and the shipping lane converged. I thought it wise to start the engine and motor slowly into the wind until we could see around us. Running the electronics all night had drained the battery bank so there was a minor scare when we couldn’t crank the engine. We cut off everything, switched batteries, and got the engine started. Another minor scare before realizing we had to reboot the GPS.

At daybreak Duwan steered into the wind while I lowered the mainsail. I took the wheel again after she threw up.

Our anchorage is in between Little Stirrup Cay and Great Stirrup Cay. We went through the narrow rocky pass into the anchorage, where there was still plenty of wind and current, but the waves weren’t so tall.

Usually I lay the anchor on the bottom, paying out the chain as the boat drifts back. I let the chain settle on the bottom, wait for the boat to swing a couple of times, and let out more chain. Sometimes it takes five or ten minutes. When we are at rest, then chain droops lazily down into the water. This time I heaved the anchor over and we immediately shot straight back. There was no question of grabbing the chain and feeding it out. I just found the tail end and secured it quickly. The boat jolted to a halt with the anchor line sticking straight out taught. It stayed taught Sunday afternoon and night.

Today the wind has abated some and is blowing from the east. A cruise ship lies off the island. Ferries bring passengers over to Little Stirrup Cay. There is a beach inside the anchorage where cruisers lounge around. There are colorful structures for kids to play on. Packs of young adventurers ride jet skis around us. I just sit and write my list of lessons learned. Always have a backup destination in case conditions change. Recharge the batteries if you’re sailing all night, and keep the barf bags handy. 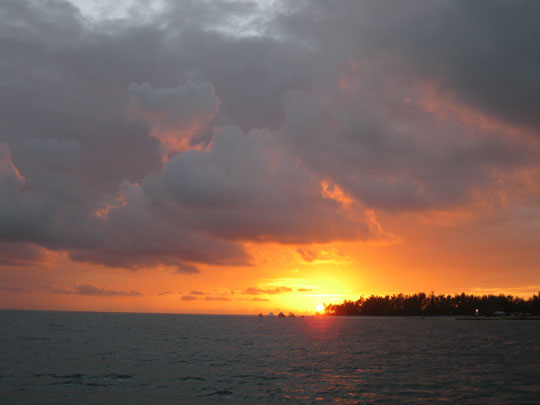 The sun sets over the cruise line playground.