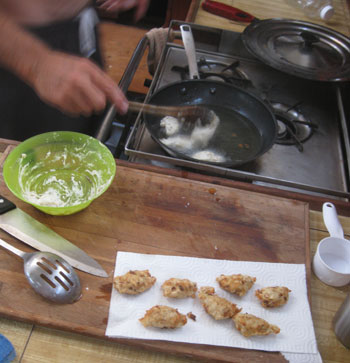 Greg fries up some conch fritters.

Greg procured another conch in the waters off of Tilloo Cay. Fortunately we had a great Internet connection at the time and he was able to look up a recipe for fritters. We had everything he needed except for eggs.

What to do if you have a recipe with eggs and have no eggs, consult a vegan â€“ vegans have a few eggless tricks up their sleeves.

Three months ago we stowed a spice grinder and a bag of flax seeds aboard the boat. I am sure Greg was wondering what we would do with these â€œuselessâ€ items, but I knew eventually we would have a recipe that needed eggs. One tablespoon of ground flax mixed with 3 tablespoons of water makes a viscous substance you can use as a substitute for eggs as a binder.

According to Greg the fritters needed more seasonings, but other than that they turned out great. 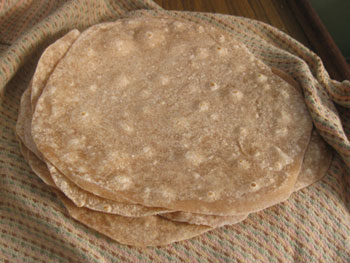 One of my goals on this journey is to buy only fresh fruits and vegetables at the store. Everything else I would like to either have on hand or have the ingredients to make on the boat. We started making our own flat bread in Eluethera. I was ready to take a stab at flour tortillas.

I found the first batch hard to roll out as thin as I liked, but the second batch of dough was moister and came out perfect. These tortillas are so much better than the store bought kind, it is worth the effort. 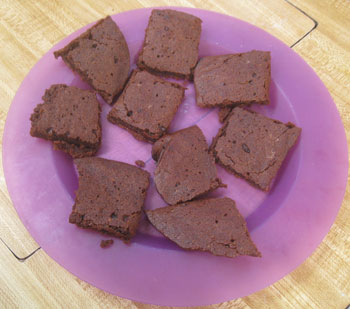 The first attempt. They looked a lot better than they tasted.

Before we left the states I made an impulse buy. Publix had Larabars on sale for $1.00 each. I grabbed 10. At first I treated myself to one as a reward for weathering a rough passage or an unpleasant anchorage, but they were going fast. I started rationing them out, only allowing myself a quarter or a third of a bar at a time, but I have been seeing the end of them rapidly approaching.

I have been craving sweets the whole time we have been here. I had been thinking about making cookies or brownies on the grill for sometime. When were safely back in the calm waters of Abaco, I thought I would give it a try.

For my first attempt I mixed up my brownie batter in a pot, then spread it on a grill pan lined with parchment paper. I grilled them for 5 minutes on one side and then another 5 on the other. It worked, except I didnâ€™t add enough sugar, they were way to oily and the burned slightly on one side.

On my second try I used more sugar and subbed applesauce for the oil. These generally tasted better, but burned slightly on one side and a lot more on the other and had kind of an airy texture.

For my third attempt I used unsweetened chocolate, added more sugar, more flour and a tablespoon of oil. These tasted much better and may have worked, except I decided to grill them on a very windy day. The grill kept blowing out. This resulted in on batch that was a little burnt and another batch that was under cooked.

My brownie recipe is still a work in progress and the Larabars are all gone. I am confident I will develop a winning recipe with a few for attempts and be able to feed my sweet tooth cravings sans Larabars.

One thought on “Experiments in the Galley”