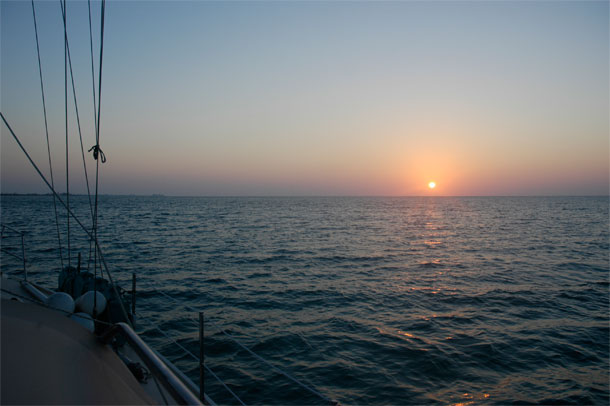 The Sun sets over The Bight of Cat Island.

We wanted to stay in Conception longer but a day of southerly wind was in the forecast. Conception has little protection from the south so we blew out of there first thing on Saturday, heading to Cat Island northwest of us.

Cat is shaped much like a backwards ‘L’. The lower part is about ten miles wide, with the island stretching about forty miles more to the north. We needed to sail over thirty miles to round the tip of the island. Our stopping place would be about halfway into the bight defined by the ‘L’ shape.

Today the wind was directly behind us. We don’t like sailing ‘on a run’ with the wind to our stern. Instead we sail on a ‘broad reach’ with the wind about 40 degrees off to one side or the other. So we sailed west on a ‘port tack’ with the wind coming over our left shoulders. At some point we would turn away from the wind or ‘jibe’ to the north.

Most of the way we were in water a mile or more deep. One notable exception was the mile-wide Tartar Bank which pokes up from the bottom to a depth of 40 feet. We decided to avoid this as there might be some weird currents there. After passing the bank we jibed north toward Hawk’s Nest Point.

Whales! Two miles below the point we were suddenly surrounded by a pod of whales. Sorry, but we went through too fast to get any pictures. We believe they were short fin pilot whales, as they were dark brown and looked to be about 20 feet long. One blew some spray for us and another slapped her tail on the water.

After rounding the point we headed up into a facefull of wind. I think the shallow bank of Cat Island was causing a sea breeze. During the day the banks and land heat the air above them causing it to rise. Air pours in from over the cooler ocean water. We sailed into our breeze, stopping at McQueen’s. Now we’d have a ten mile stretch of Cat Island to shield us from tomorrow’s south winds.

One thought on “Passage to Cat Island”