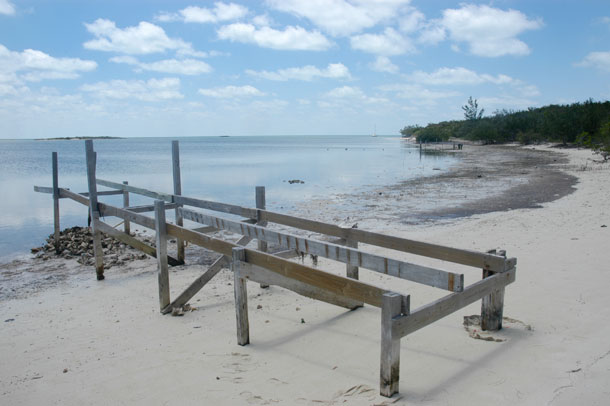 Looking south from Allans Pensacola Cay. You can barely see Blue Wing anchored on the right. The anchorage was a little tight and shallow to get into, but seemed very cozy and well protected.

The islands of the Abacos define the borders of three expanses of water, The Sea of Abaco, The Little Bahama Bank, and the Bight of Abaco.

Blue Wing has spent quite a bit of time in the Sea of Abaco where most of the settlements, tourist attractions, restaurants, bars, marinas, hardware stores, grocery stores, and other comforts of society are located. She sailed through the sparsely populated Little Bahama Bank in the northwest Abacos, stopping only briefly for over nights rests, on our return to the states last season and at the beginning of our Bahamas journey this past December. But Blue Wingâ€™s bow has never parted the waters off of the western shore of Great Abaco Island, the elusive and secluded Bight of Abaco.

There are only a few ways into the Bight of Abaco. The only northern route goes from the Little Bahama Bank through the narrow, winding, and very shallow Spence Rock Channel. There are a couple of channels into the Bight from the south, but in order to reach them, one must first transit the very deep, open waters of the Northwest Providence Channel from either the closest anchorage, 30 miles away in the Berry Islands, or the closest marina, 50 miles away at Grand Bahama. There are few settlements in the Bight that are accessible to sailing vessels. This deficit of civilization combined with the limited, tricky, and uninviting entrances make it an area that is rarely cruised. So, of course, I wanted to go!

On Friday morning April 26 we parted ways with Jules, Jeff, and Neil. We had plans to be in Green Turtle on May 3 for a two-day festival, but until then we had no definite agenda. As our new friends headed back south to their next destination, we headed in the opposite direction across the Little Bahama Bank towards the Bight of Abaco to do a little reconnoitering.

Since we were way too far away (a two or three day sail) from the either of the southern channels into the bight, we chose to take the northern route, but this meant first figuring out if Blue Wing would be able pass through, without going aground, the narrow stream of water leading into this remote area. 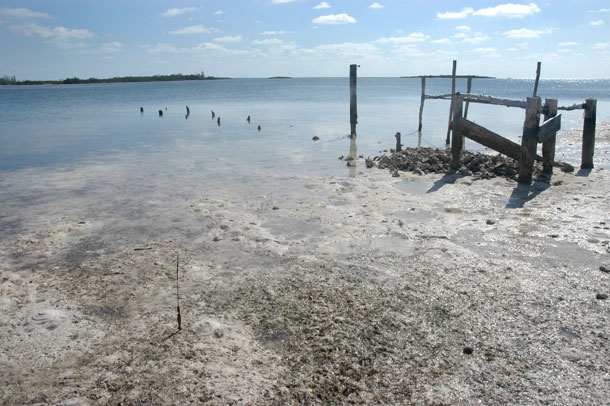 Another view looking south from Allans Pensacola. This cay was two cays at one time (“Allans” and “Pensacola”), before a hurricane joined them. 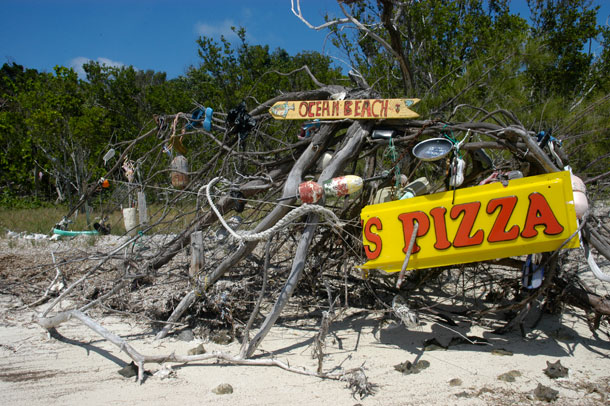 The pizza sign marks the start of the trail across Allans Pensacola Cay. 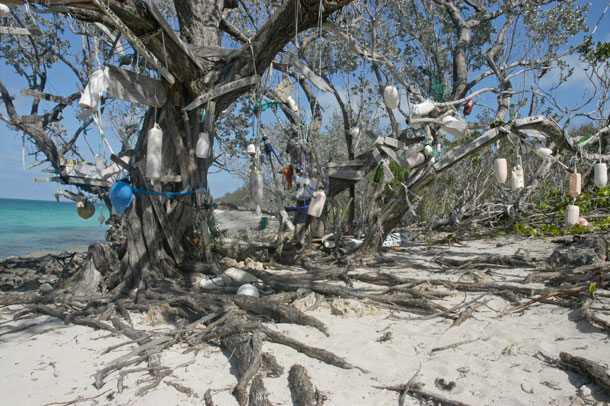 The trail led to the other side of the island where we found the signing tree. 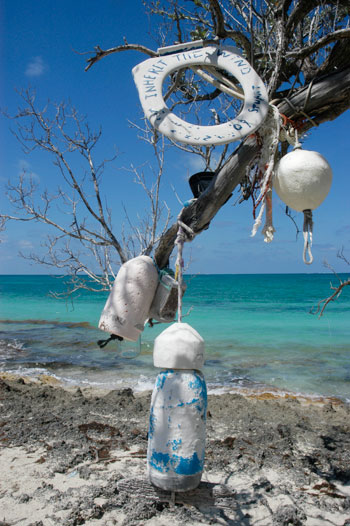 Just about anything can become a sign at the signing tree. 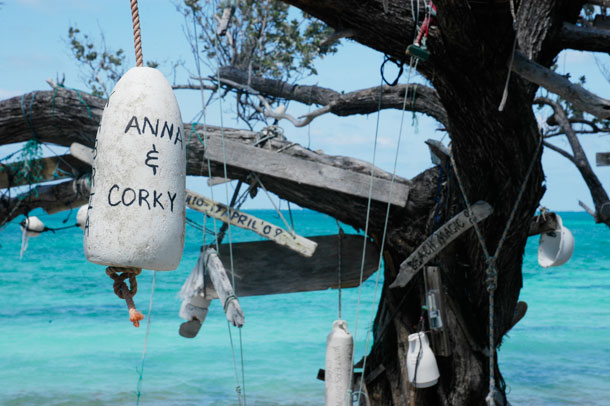 Boaters leave their mark at the signing tree. 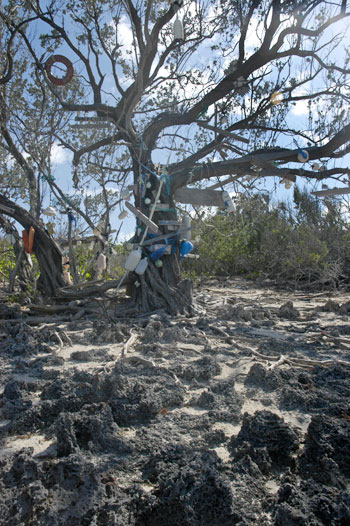 Unfortunately we didn’t have a sign to add to the collection. Maybe next year. 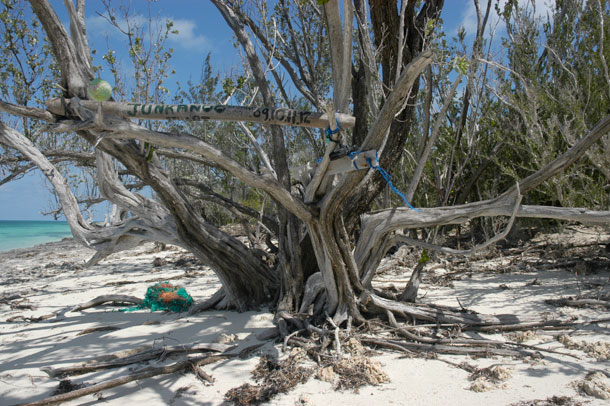 The signing tree has spilled over to other trees running down the beach. 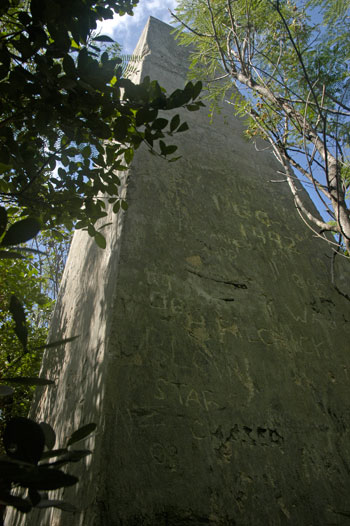 Further down the beach back in the thick brush we found ruins of a US missile tracking station. If you look closely you can see that CC left his mark in 1492. 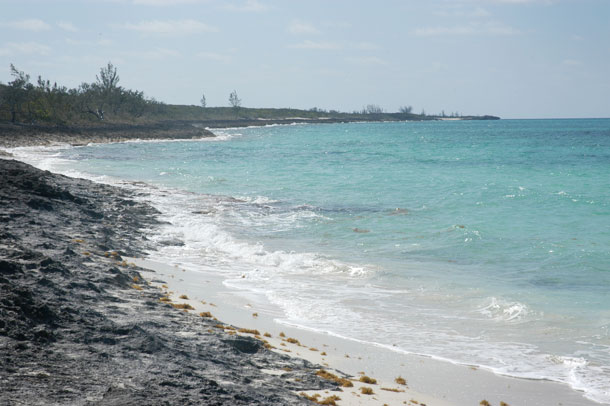 Beach on the Atlantic side of Allans Pensacola Cay. 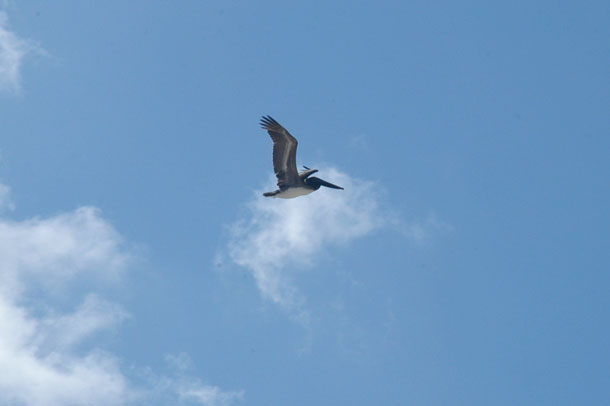 A pelican flies over Allans Pensacola. 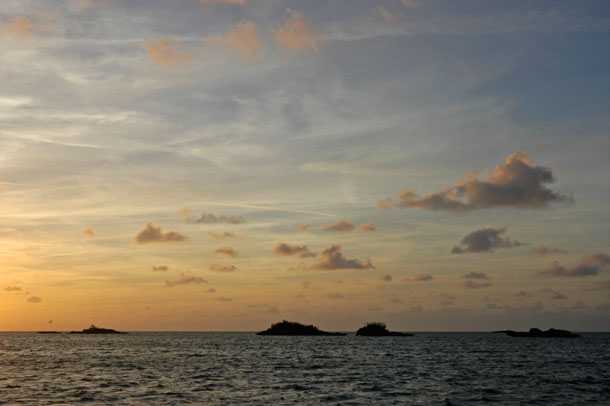 The sun sets on my favorite group of rocks in the Bahamas at the anchorage at Foxtown.

We needed to determine two things: When exactly high tide was and where the deepest parts of the channel were. Our chart told us that high tide was 2 to 4 hours after high tide in Nassau. We have a tide chart for Nassau, but we wanted to be more exact than 2 to 4 hours. Parts of the channel are as shallow as 4 feet at low tide, so we were going to need to know exactly when the tide was at its highest in order to gain the extra 3 feet of water we would require to get through. Although both our paper charts and our GPS showed water depths in the channel, we wanted to make sure the readings were accurate and that nothing had changed before taking Blue Wing through the tricky passage and possibly finding ourselves stuck on the bottom with no help to be found for very many miles.

Our first day at the channel was spent determining the time of high tide. We spent the afternoon on the boat checking our depth meter every 15 minutes recording the numbers as they went up, peaked, and went back down.

The next day we endeavored to complete the second part of our recon mission and traverse the channel in Fever, measuring water heights. Since we donâ€™t have a hand held depth meter Greg tied a rope to our dinghy anchor and marked it off at inch intervals, which we planned to throw in the water at different locations and record the depth and time on our tablet. Of course, Fever was still motorless, so we were planning to row the 4 mile long channel. As soon as we moved Blue Wing closer to the mouth of the channel (out of the lee of the island) our plan started to look even more difficult than it sounded. The wind was up and there was no way we were going to be able to row and do everything else we wanted to do with any kind of ease.

It was about mid-tide when I took the helm, we enabled tracking on the GPS so we could record our route, then motored slowly down the narrow passage. We had every waypoint numbered, so as I hit each one, I called out and Greg recorded water height and time. The chart was looking pretty accurate until we saw the depth meter sink to 6 inches. It was an extra tense moment in an already tense passage, but didnâ€™t last long as we skimmed through it and got back on track. Greg made note of the spot on the tablet. Finally we reached the middle of the channel and turned around to retrace our steps. No scary shallow spots on the way back! 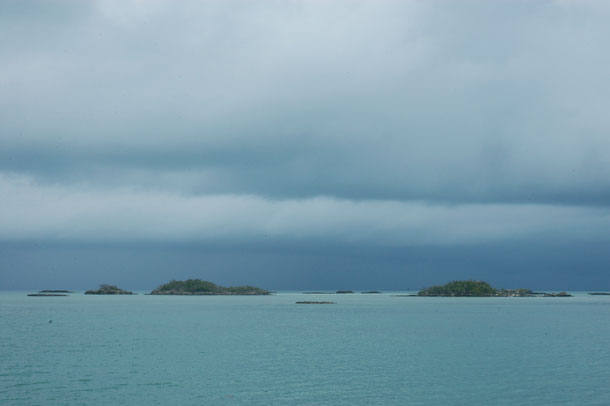 On our second stop outside of Foxtown, the waters were calm, but the skies hinted at wet days to come. 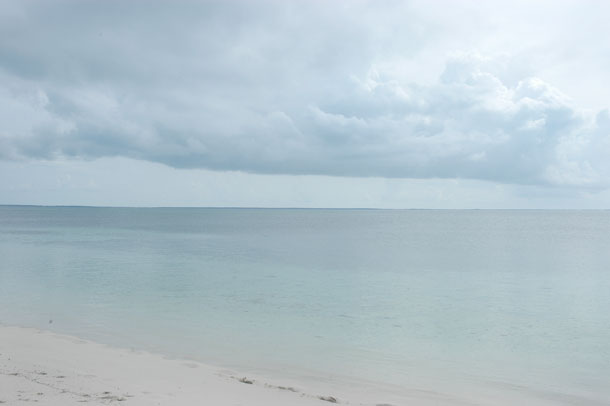 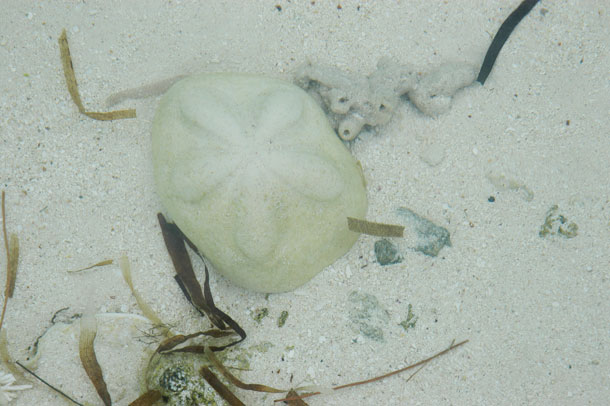 There were tons of these shells on the beach at Guineamans Cay. 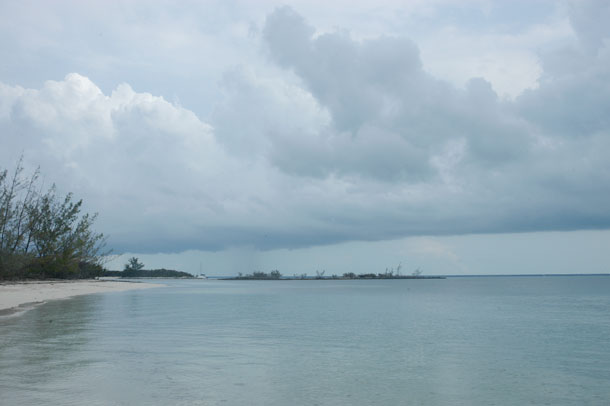 Looking towards the east at Guineamans Cay as rain clouds start to roll in.

With our recon mission as completed as it was going to get, we decided to work our way back to Green Turtle for the festival. We spent another night anchored outside of Foxtown, before heading back to Allens Pensacola Cay where we explored the neighboring Guineamans Cay. On May 2 we decided to head back to Green Turtle. It was drizzling as we left Allens Pensacola, but as we continued towards our destination the weather worsened and we found ourselves fighting wind and rain. We abandoned our Green Turtle plan and tucked up into the Crab Cay anchorage. That night the winds howled up to 39 miles per hour with rain ceaselessly pounding Blue Wingâ€™s deck. A group of seven boats from the Emilia Island sailing club fresh in from a transit from Florida fell in behind us at the anchorage that evening and a couple of them dragged anchor that night. The next day was brighter to the south, but still dark in the north. The sailing club left, but we stayed through another day of rain and angry skies, missing the start of the of the Green Turtle festival.

Finally on Saturday the rain abated and we decided to head out. The weather had worn us down and we were starting to feel adventured out. We decided to abandon our Bight of Abaco Plan and head back to Florida, but first we needed head back to Green Turtle to fuel up and water up and if we were lucky, catch the end of the festival. 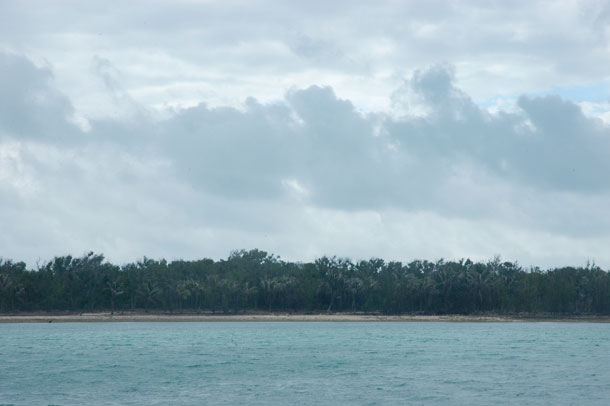 The shore below Crab Cay on Great Abaco Island. 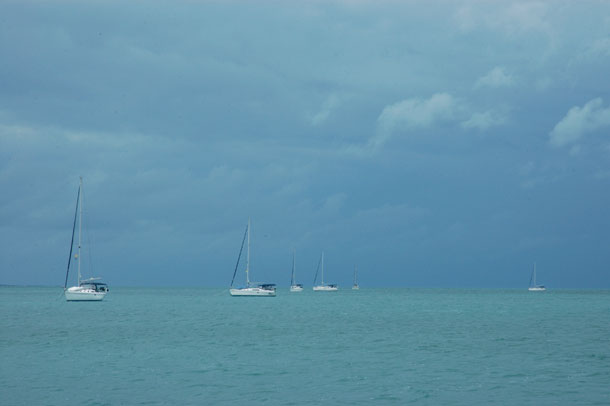 Six of the Catalinas sailing with the Emilia Island sailing club anchored off of Crab Cay. The seventh boat is to the right outside of the picture. She dragged during the night and ended up with her anchor chain wrapped around her prop. We would meet several of the members of the club and learn their story at the Bluff House bar on Green Turtle a few days later. 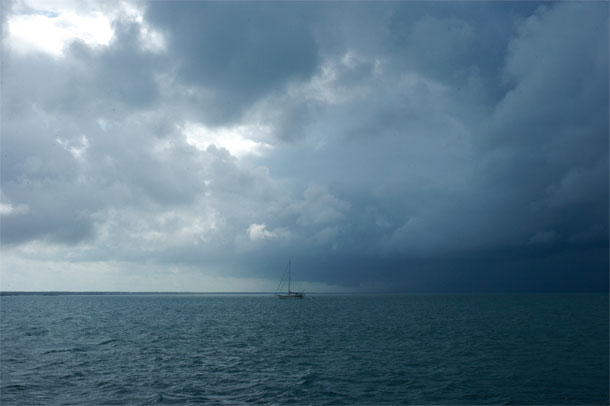 On our last full day at Crab Cay we right on the edge of the storm. If we looked south, the skies were full of fluffy bright clouds. If we looked north, they were dark and menacing. This is a view looking west.