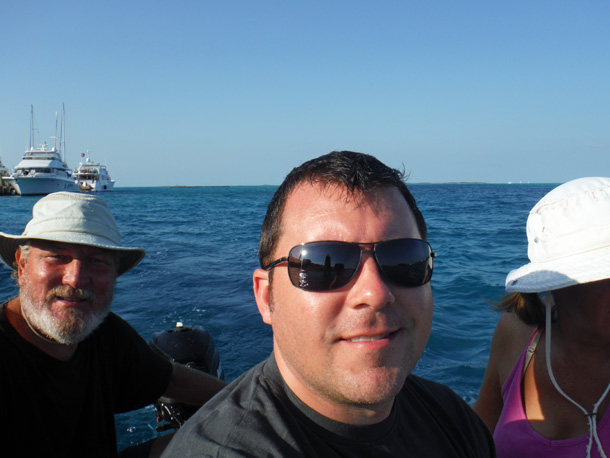 The dinghy ride to Blue Wing

I’ve been reading Greg & Duwan’s blog for 3 years, and talked to them at length about their sailing adventures. We were neighbors in Cabbagetown and when I heard about their leap into the unknown, I was hooked. They gave me an open invitation to join them whenever I could. The time had come, and I scheduled 8 days to spend aboard Blue Wing.

Despite a little date mixup with Flamingo Air and unexpected overnight stay in Nassau, I arrived in Staniel Cay the morning of March 12 and met up with Greg and Duwan. We took a short walk down to the marina where Jethrine was waiting to take us back to Blue Wing. This was only my second time aboard a sailboat; my first being a 3-hour sailing lesson in Pensacola Bay in 2012.

I stepped aboard and got my things settled quickly, but there was no time to waste before it was time to move. Winds were forecast to come out of the west overnight, and we needed to find a comfortable place to anchor. Greg and Duwan thought that Cambridge Cay would be the best spot for the night, so we pulled up anchor and headed out into the beautiful blue Exuma Sound for the sail up to Cambridge. When we made it out of the cut, Duwan let me take over the helm, which I eagerly assumed. There was a brisk wind out of the south, and we averaged 6.5-7 knots the whole sail.

We arrived in Cambridge Cay around 2pm and found a spot on the southwest side of the mooring field to drop the hook. Afterward, we had a quick lunch aboard (my first meal of the day), and decided to go exploring on the island. We dinked over to shore and took a short hike across the island with our snorkeling gear in tow. Greg and I dove on some coral just off the beach while Duwan was trying to sort out her leaky mask. It was only my second time snorkeling, but I went right for it. We saw some pretty elk horn coral and several fish, but eventually decided to move on. Greg said there was another area a few hundred feet down the beach, so we took off while Duwan took pictures.

Right after we entered the water in the second spot, I turned to the left, away from the coral and saw a huge manta ray swimming right for us from a couple of hundred feet away. I fumbled a bit with my camera in the excitement, but managed to get a couple of shots. As she turned off toward the beach, I realized there was a baby ray swimming in her draft. It was one of the coolest things I’ve ever seen. It definitely made the entire dive incredibly special.

After the high of seeing the manta ray and diving on some additional coral, it was time to wind down. After all, it was just a few hours after I landed that all this was happening. We hiked back across the island, dinked back to Blue Wing and had dinner and cocktails before going to bed.

The next morning, we were essentially stuck in the anchorage due to the strong westerly winds. It was a day to stay put, as least insofar as Blue Wing was concerned. But after some breakfast and weighing our options, we decided to dink over to the island and do some more exploring. This time, Bell Rock was the first stop. About the time we got ready to dink over, some ominous grey clouds began to form in the area. But we were committed. It started to sprinkle a little bit, which wasn’t so bad until Greg and I reached the top of Bell Rock. The sprinkles felt more like little needles hitting us due to the strong winds and no protection from them. About that time, we heard multiple air horn blasts that seemed quite out of place in a peaceful anchorage. We would later find out that a big motor yacht had come loose and was dragging anchor with nobody aboard. Oops!

The 3 of us hiked along the northeast shore of the island, and because the winds were blowing from the other direction, entire areas of the shoreline were exposed that would normally be pounded by relentless waves. We were able to explore nooks and crannies of incredible rock formations that had been punished by the tide for thousands of years. We collected some sea glass and some great photos on our way back to the beach where Jethrine awaited us.

It was a relaxing evening back aboard Blue Wing, but it would one of the last leisurely parts of the trip. Cambridge was the only place we stayed put for more than 24 hours. The rest of the trip had a much faster pace, with adventures following one after another. 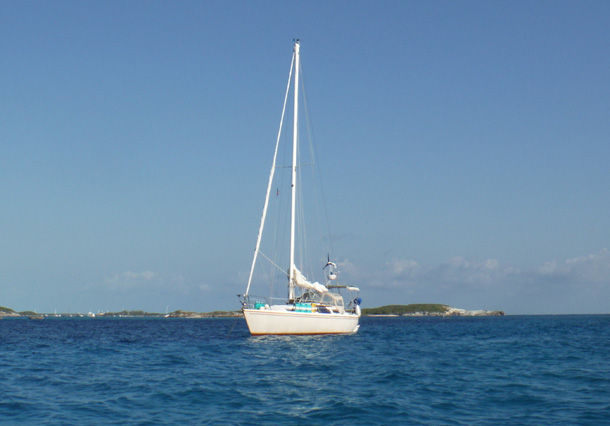 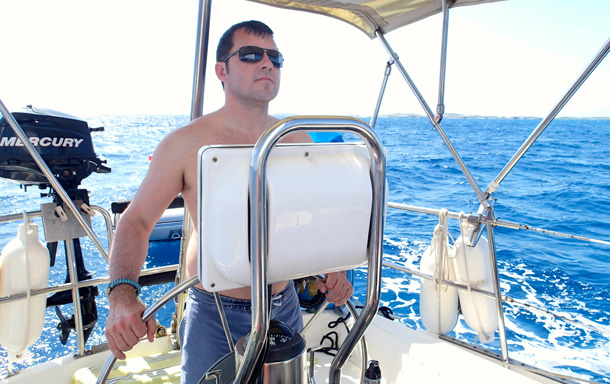 My first chance on the helm. We were in the beautiful Exuma Sound making 6.5-7 knots on the way to Cambridge Cay. 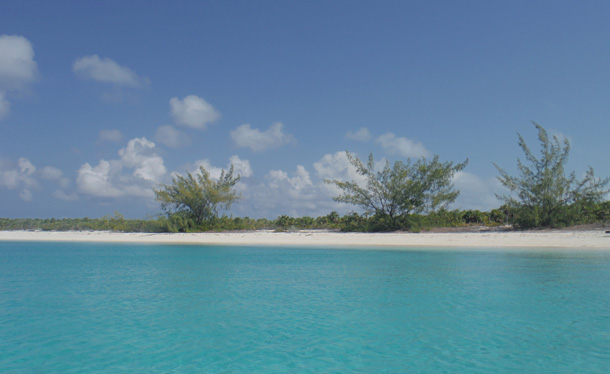 The beach where we came ashore to go diving. 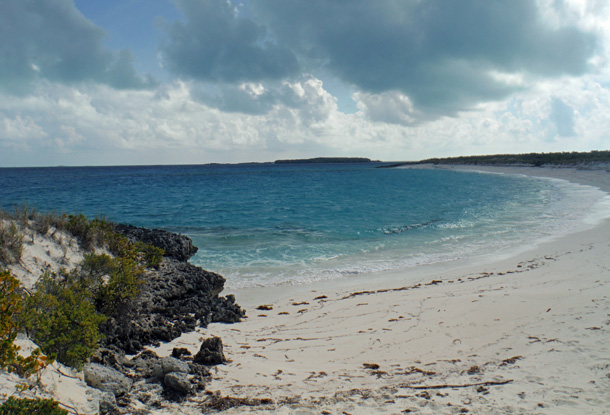 The beach where we went diving. 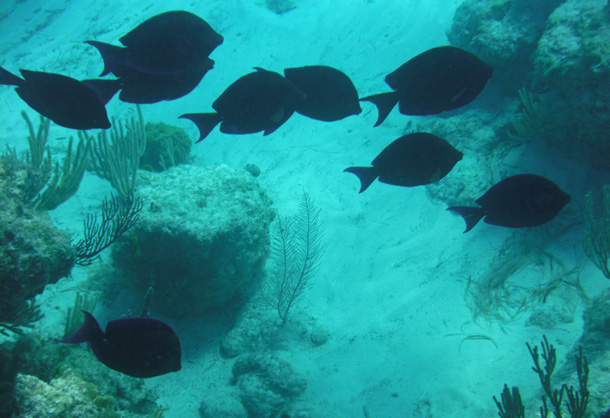 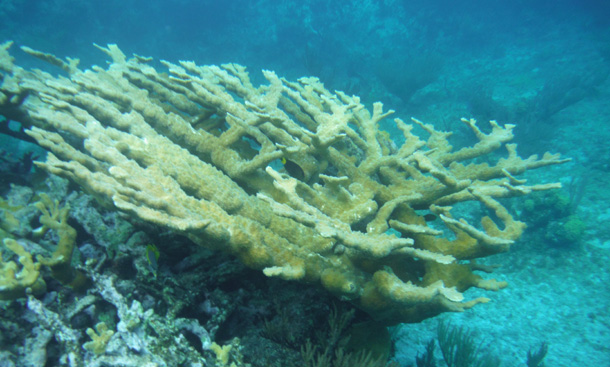 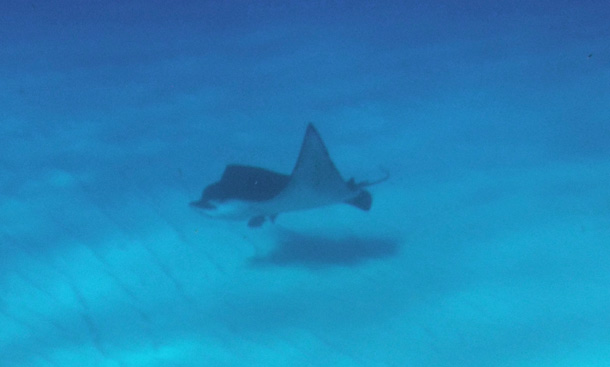 The huge manta ray after she turned away from us. Unseen in the photo is the baby ray swimming under her to the right. 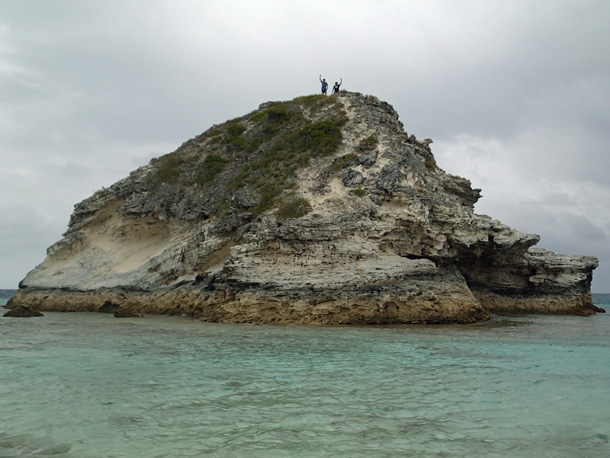 Greg and Brandon on top of Bell Rock 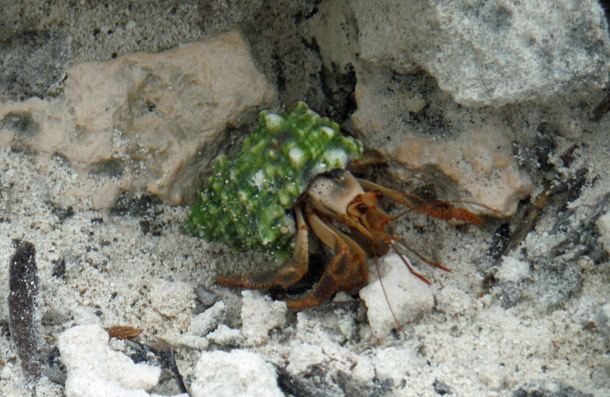 A crab with a spiffy green shell. 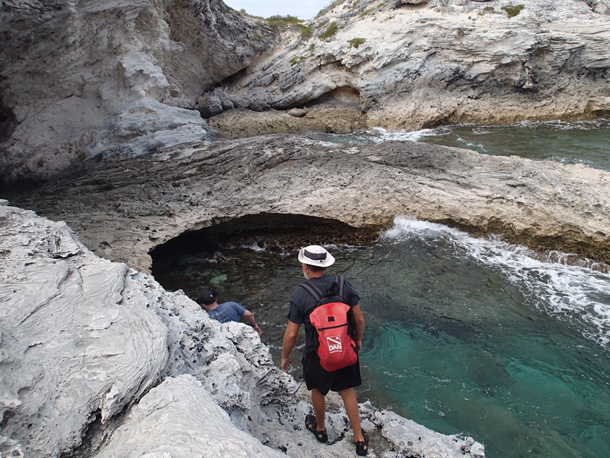 Greg and Brandon exploring the coastline along the sound side of the island. 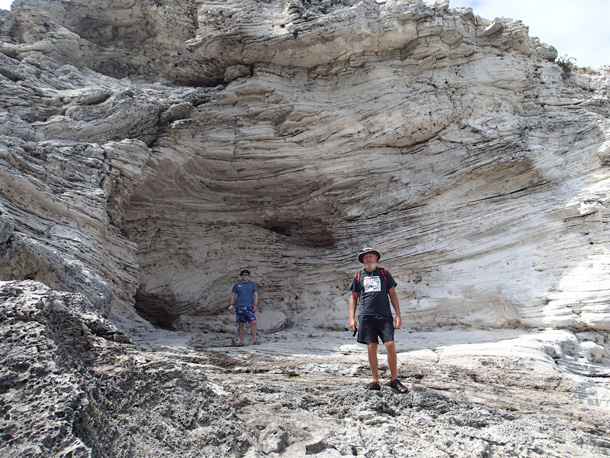 Greg and Brandon under the ledge. It looked like this thing could collapse at any moment! 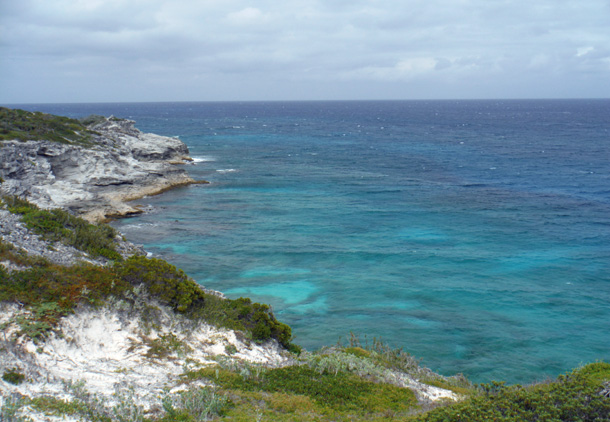 Ledge overlooking the Exuma Sound. You can see from the photos where the water would normally be covering the rocky shoreline. 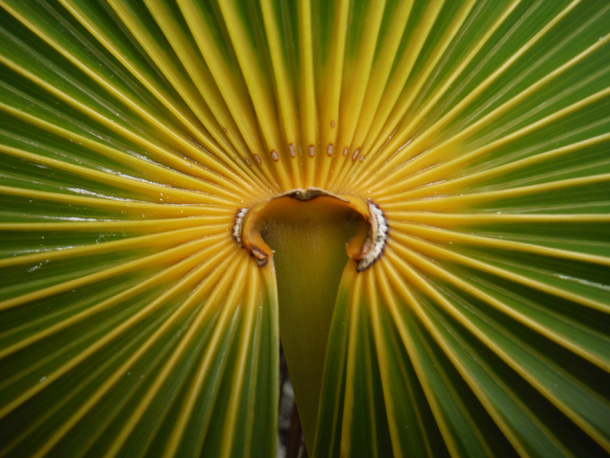 A plant that looked too cool not to shoot. 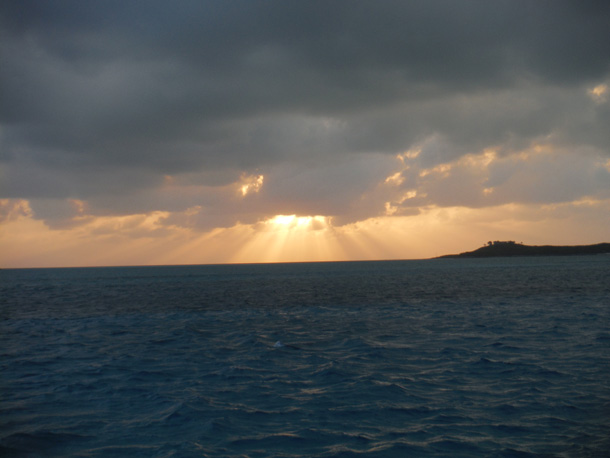