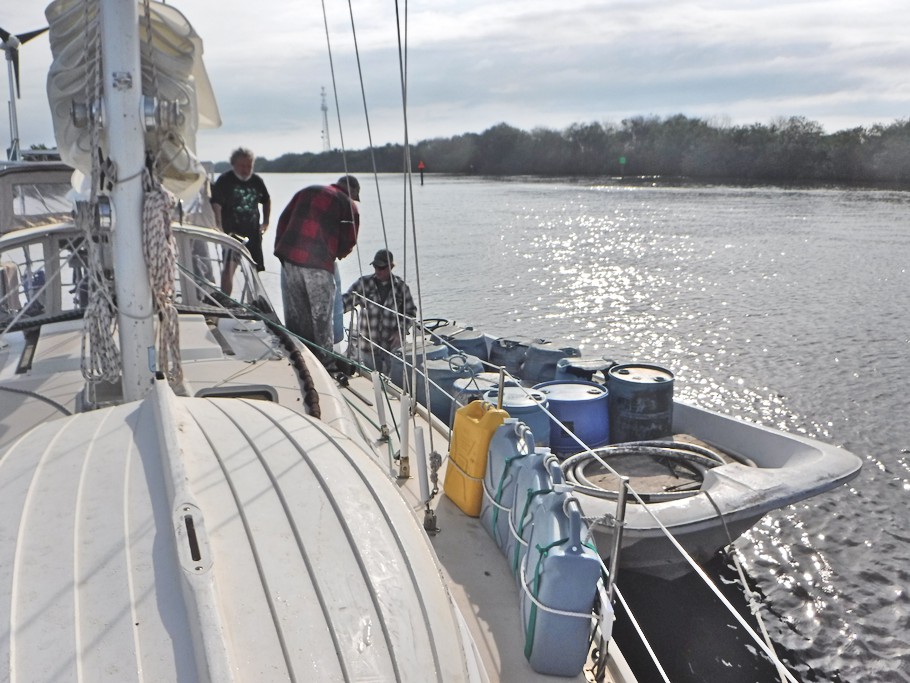 We motored through Lake Okeechobee Thursday, March 3. It’s now Friday and we are tied up to some dolphins (pilings) just west of the Port Mayaca railroad bridge.

You’ll remember that on our outbound journey we tipped the boat ourselves to get our 50′ mast under the 49′ bridge. We barely squeezed through. Southern Florida has received a lot of rainfall in the past three months, and the water level is 1.5′ higher. Also, all the beer and half the other provisions have been consumed, so the boat rides higher in the water. We won’t be able to tip the boat ourselves this time.

At 9AM Billy the Tipper arrives. We called him a few days before to arrange for his help. He wanted to know what kind of boat we have. After years of doing this he has learned that some boats don’t tip very well. He said he could tip us for $200. Sounds fair.

He and his help put six large plastic drums on our port side. We tie a line from bow to stern to secure them. He starts his pump engine and they begin to pump nasty brown Okeechobee water into the barrels. I will be at the helm so Duwan can take pictures. He tells me to cast off and head for the bridge.

The lake is draining so fast we move at 3 knots (roughly 3MPH) when idling toward the bridge. I think we are approaching too fast. The guys show no concern.

As the plastic drums fill, the boat slowly heels over. The bridge looms ahead. It doesn’t seem to me that we are tipping fast enough. I mention this. Billy thinks we’ll be OK to speed up.

Just before we get to the bridge, the boat is tipped dramatically. Billy, lights a cigarette, steps up off his boat onto ours, and tells me to throttle up. We zoom under the bridge, and the boys open plugs at the bottoms of the barrels. We’ve made it.

After Billy leaves I call the Indiantown Marina. We have a reservation for a haul out on Monday, but maybe they can work us in today. They say they can. They don’t have any space on the dock for us, so we anchor out in the waterway for a few hours, watching the current whiz by. We call our friend Brenda to ask if she can give us a ride.

Jesse and Alex haul us out mid-afternoon. Brenda couldn’t come get us, but she has relatives in town. She sent them. Her sister Cathy (who I haven’t seen in decades) and sister Barbara and her husband Ted take us to our Stuart home. We’re back safe and sound.

Back when we were forced to turn around and cut our season short, conditions were bad. As we motored in the darkness into the wind and waves, Duwan wondered aloud if we should just hang it up and sell the d@#$d boat. I said she’d get no argument from me.

But we’ve enjoyed our return trip. We know we’ll have to deal with the forestay problem before we sail again. But we’re already talking about how to make our next run at Mexico, Belize, Honduras. 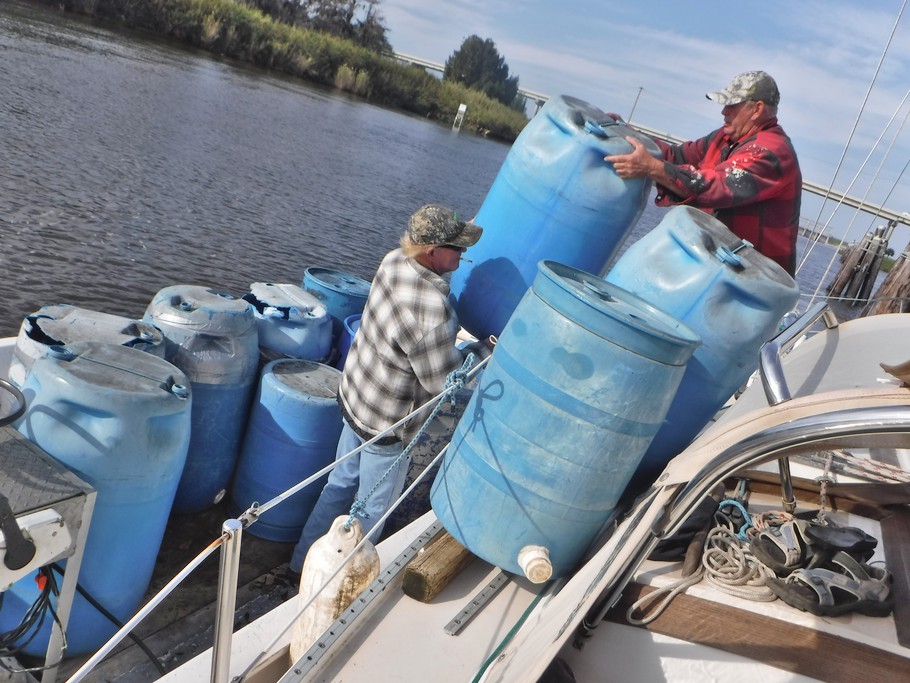 Billy and his helper start to load barrels on Blue Wing. 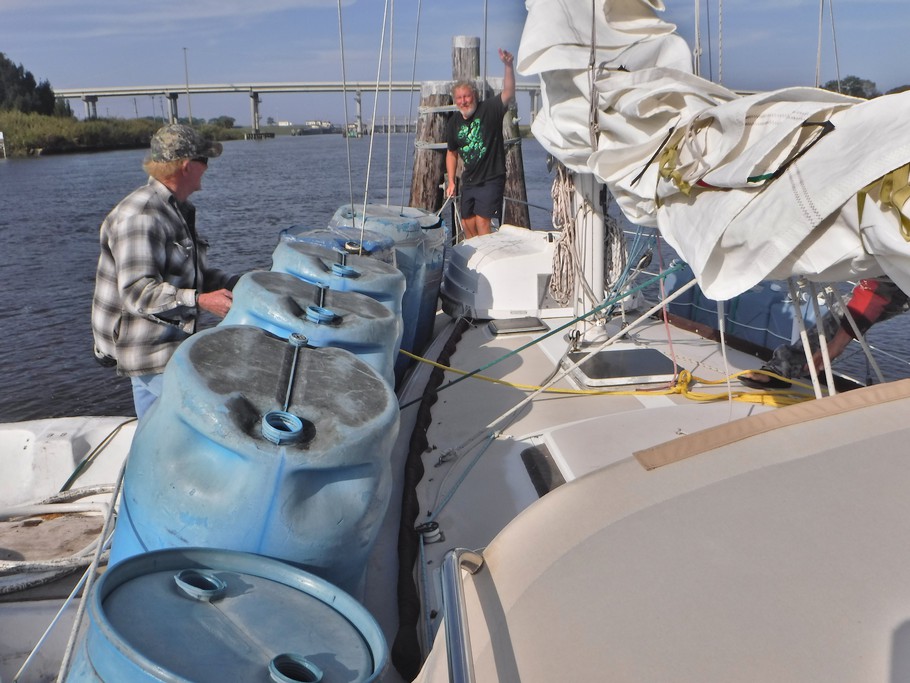 Greg and Billy tie the barrels on. 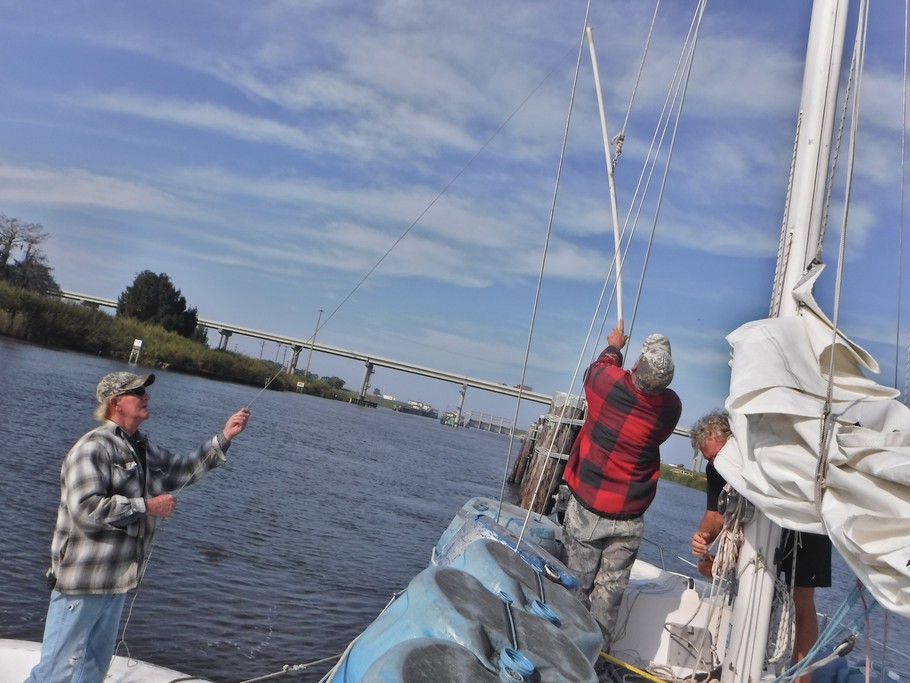 The guys hoist a measuring stick to the top of the mast. If the stick clears the bottom of the bridge the mast will also. A line hanging from the stick trails in the water, measuring the height of the tipped mast. 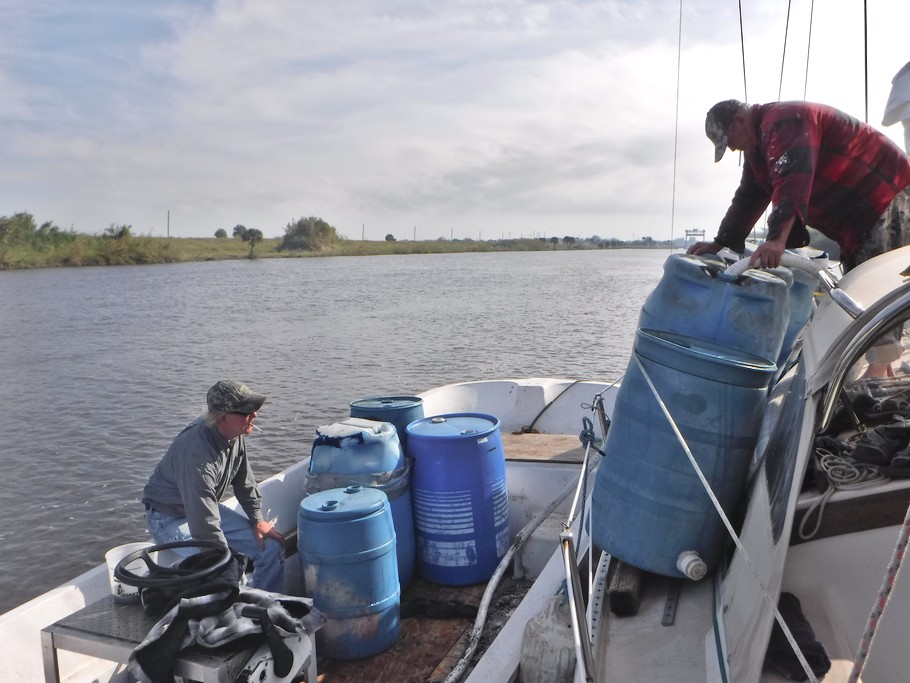 Pumping river water into the barrels. 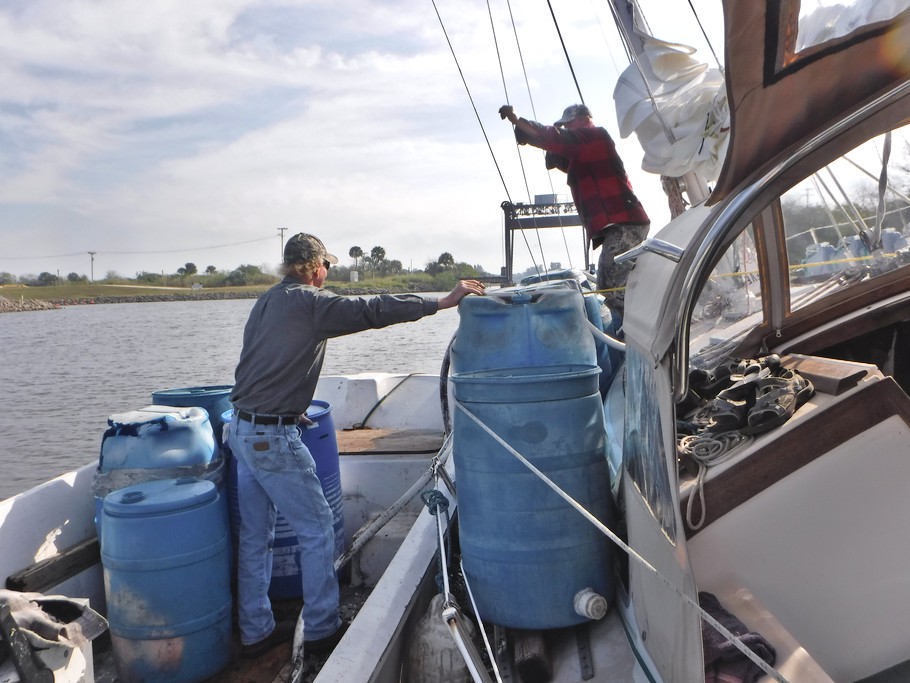 Blue Wing is tilted and we are heading to the bridge! 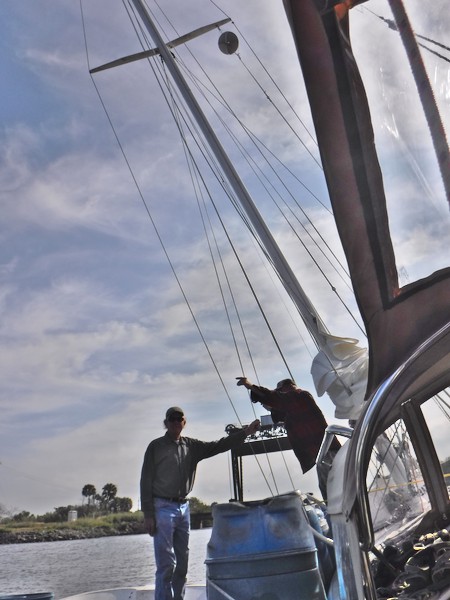 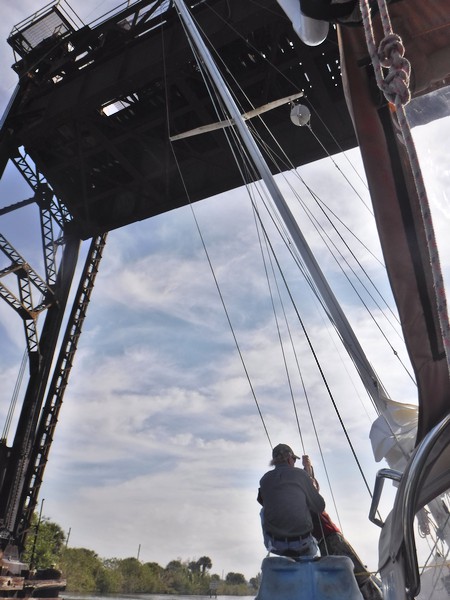 On the other side, Billy lets the water out of the barrels. 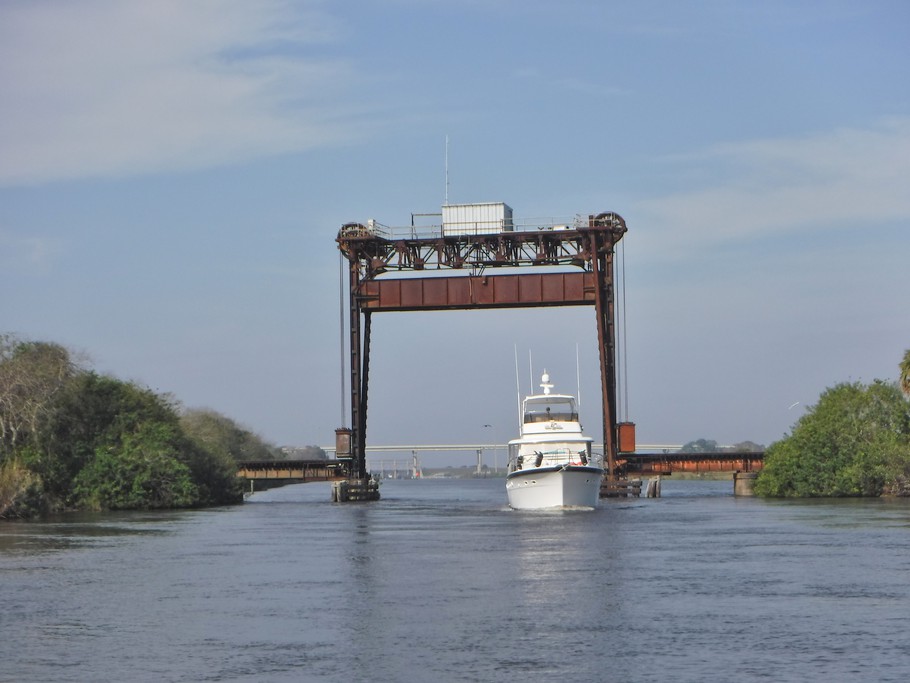 It’s so much easier for Trawlers.

8 thoughts on “Billy the Tipper”