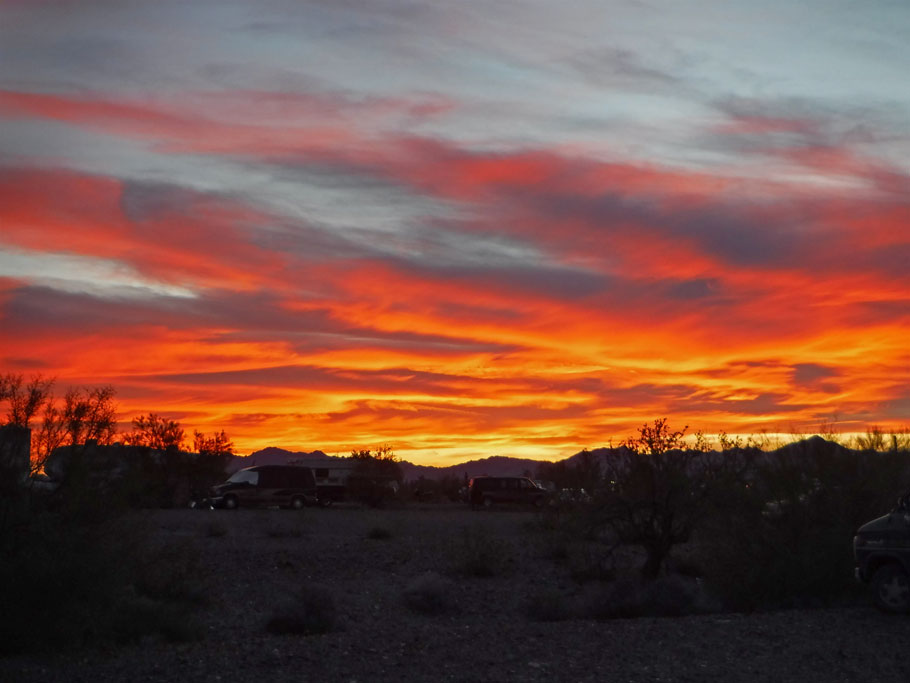 We arrived at the Rubber Tramp Rendevous in Quartzsite, AZ in time to catch this amazing sunset.

On January 10 we funally made it to the Rubbertramp Rendezvous (RTR) in Quartzsite Arizona. We were there for 10 days and lots happened, lots didn’t happen, we met a few people, reconnected with a few, got some stuff done, had some fun, and got a taste of the nomadic, van/RV living lifestyle. It was a lot, so I thought it might be easier and fun (hopefully) to tell you this story in an interview format.

Duwan: It is a meetup of van dwellers, RVers, car campers, travelers, and wanna-bes, organized and led by Bob Wells. 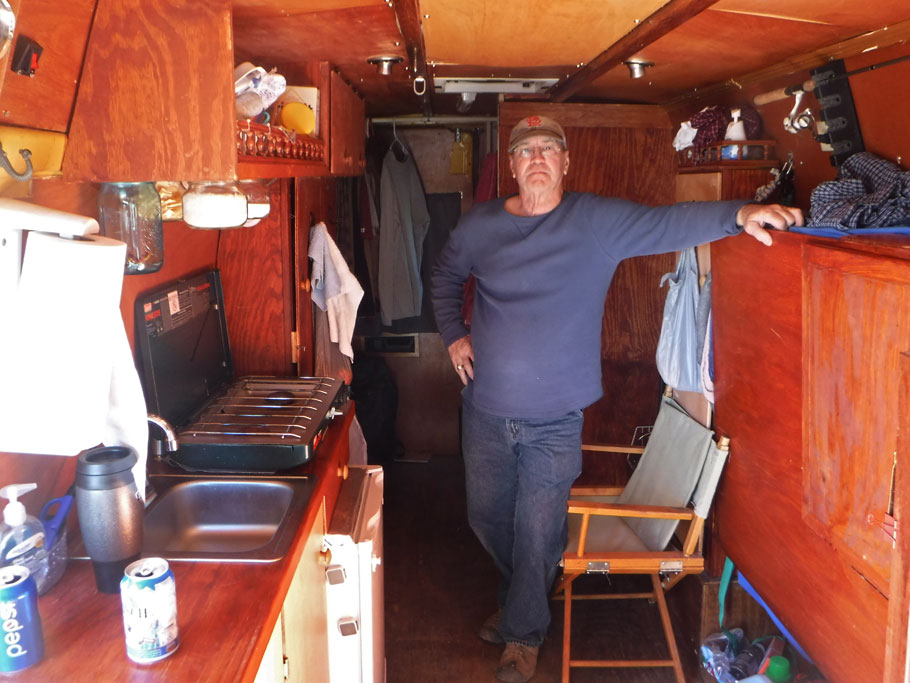 Van dweller, Dave inside his rig. 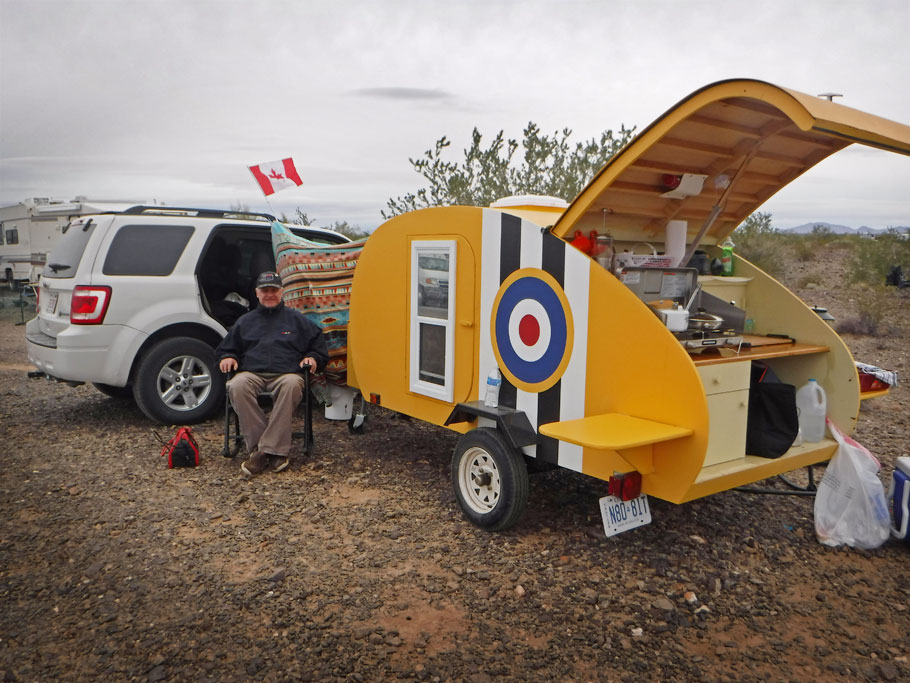 All the way from Canada with his homemade teardrop trailer.

MLAAM: And exactly is who is Bob Wells?

Duwan: For many he is the van living guru. He has written a book, has a youtube channel and a website called cheaprvliving.com.

Greg: He really is a leader in this culture. He doesn’t enjoy big noisy gatherings, but he feels the need to help people learn how to camp cheaply. He especially wants to help people who feel forced to live in vans because they can’t afford homes. (And they’re out there, folks.) 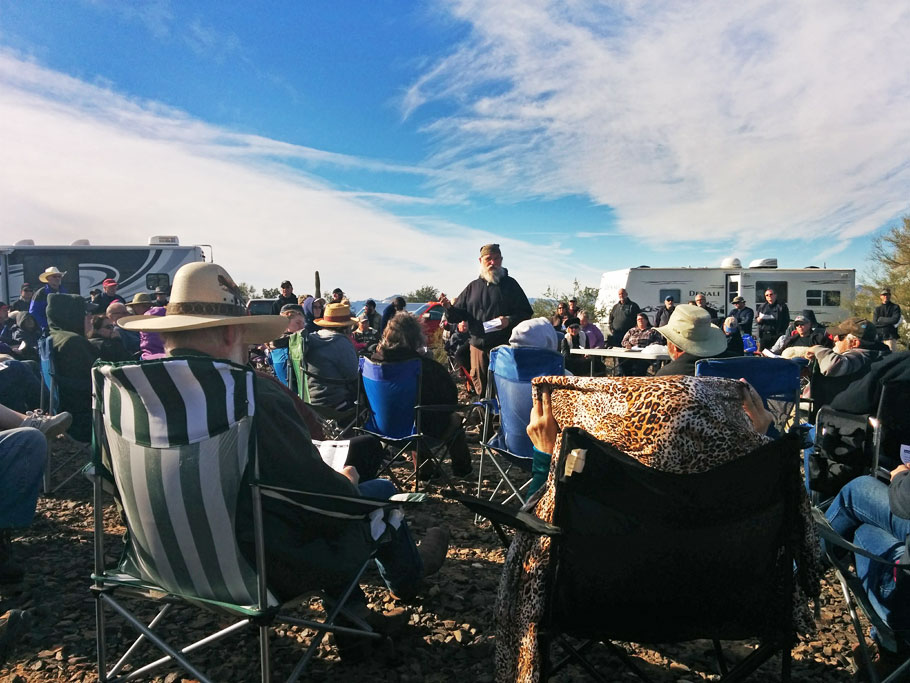 MLAAM: When is the RTR held?

Greg: The winter RTR lasts the ten days preceding Quartzsite’s Big Tent event. We’re told that in addition to the camping vendors you would expect at Big Tent, it’s the place to get seasonal work to support your camping habit. You can find employment as a park host, migrant worker, or Amazon temp.

MLAAM: What happens at the RTR?

Duwan: People develop community, meet other â€œRubber Tramps,â€ learn about the lifestyle, attend seminars, check out other peolple’s vans or RVs, and get away from it all for a few weeks. Some of the seminars include medical care in Mexico, boondocking tips, camp hosting, and favorite gadgets.

The crowd gathers for one of the morning seminars

MLAAM: Where is this event held?

Greg: It’s held on BLM land near Quartzsite, AZ. Picture a flat plane of fist-sized gravel, sparsely populated by saguaro cacti, with arroyos running through it. The town itself is something of a camper’s Mecca. It caters to folks who come south for the winter.

Duwan: It is, sort of. It is kind of like Georgetown in the Bahamas – a gathering place for all kind of travelers. People come in their vehicles and stay all winter. There are bars, restaurants and shops that cater to the tons of retired RVers who flock there. RV parks, one after another, line the roads and for those who either don’t like to or can’t afford to pay to be sandwiched in with tons of giant campers, there is plenty of BLM land to camp on for free. 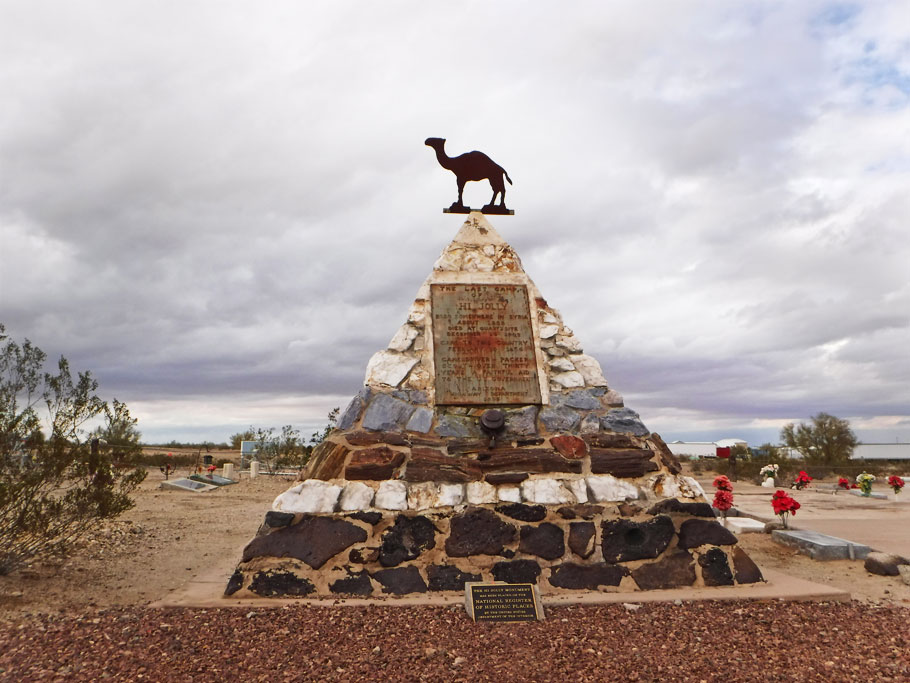 We didn’t spend much time in the town of Quartzsite, but did spend an few hours visiting the Hi Jolly Monument at the Hi Jolly Cemetery. Prior to being elected president of the CSA, Jefferson Davis led an effort to study using camels for transportation in the southwestern US deserts. Mid-Easterner Hadji Ali was hired as the head camel jockey. The local yokels couldn’t say his name and dubbed him Hi Jolly. The Civil War took priority over the camel experiment. But Hi Jolly stayed on becoming a popular local fixture.

We always seem to end up in grave yards. People in Quartzsite are darn proud of their rocks and seem to love to creatively decorate their graves with them.

Duwan: Bureau of Land Management (BLM) controls lots of federally owned land. Sometimes the land is protected as historical sites, preserves, or national monuments. Often times it is rented out to farmers for their cows to graze on. Sometimes hunting is allowed. And usually anyone is allowed to camp on it for 14 days at a stretch for free. The Quartzsite area has tons of BLM land. 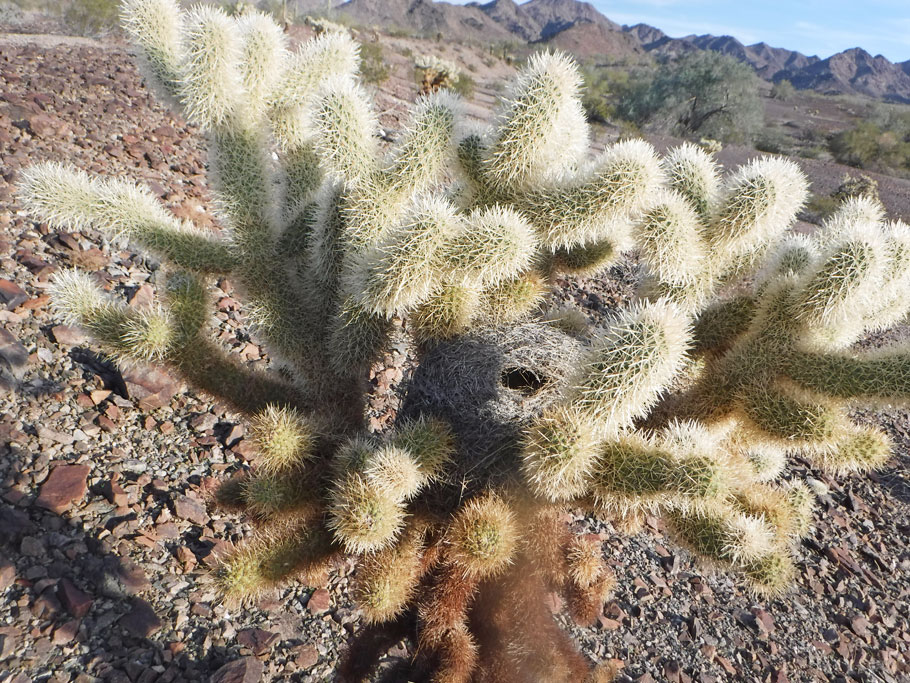 Bird’s nest in a cholla cactus.

MLAAM: Who comes to the RTR?

Greg: Five to seven hundred campers who follow Bob Wells. Duwan has done most of our online exploration of the van world. I’ve watched a few YouTubes of projects, but I didn’t realize there is a whole culture of people who share their daily activities on their own YouTube channels. Now I know that there are celebrity van dwellers. I’ve seen some of them in person!

There is no to capture the immensity of RTR from ground level, but we tried and took lots of panorama pictures.

Duwan: There was much excitement about the celebrity youtubers at RTR. We passed a few people on one of our walks one day who were all excited because they were going to go meet one of these celebs. You know, some guy who was living in a van just like them, except he is Adventure Van Man and has a youtube following. We met a guy who found himself the unexpected subject of a youtube video. His rig had broken down in the desert and he needed help. He made a couple of pleas in the comments of a couple of different youtube videoers and got a response from a couple who came out right away, but not before first grabbing their camera in order to film the dramatic rescue. 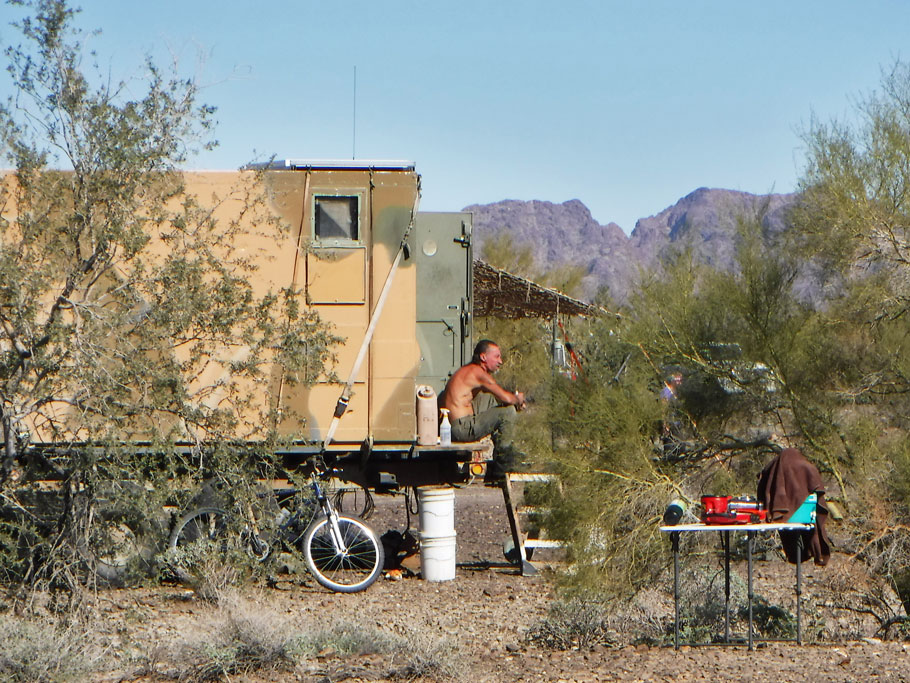 Guy in a camo rig.

MLAAM: Five to seven hundred campers? That’s a lot of people! Any drama?

Duwan: Yeah, sure. But of course I didn’t find out about it in person. I learned about it at 3AM the third morning of the RTR. This is the only time of day I could get anything on my data plan. Unable to sleep, I checked my GalVanner group on FaceBook, and found that Bob Wells had made a video titled ‘Madness and Depression at the RTR’. Bob was so disturbed by campfire music that he left his rendezvous event, relocated his camp off in the desert, and recorded his distress.

After reading a post about this and some of the comments I realized that the women commenting were probably not at the RTR. I was there. And now I was sure that the GalVanner campfire was the one he was complaining about!

Greg: I once had this strange idea that people enjoyed singing and playing music around campfires. I have been disabused of this notion. Suppose some cute young girl comes up to you and says she needs help learning to play the ukulele. Do you say “Hell, no!” and send her off into the darkness? And if some one asks about a song you learned as a kid in summer camp. Do you just tell him you’ve forgotten the words? I now know that the answer to both of the questions is a resounding ‘YES’ if your campfire is near Bob Wells’ van.

Duwan: It happened the way these things do. The main campfire was dull. We got a text from a GalVanner asking for uke tips. On the way over a girl from Slab City (we explain Slab City in a later post) said she also wanted some uke instruction. Now, despite the fact that we know the ukulele is a ‘gateway’ instrument to the ‘harder’, more addictive guitars and drums, we chose to continue on to the GalVanner campfire.

The results of our music revelry which I believe led to Bob’s video have been recorded in RTR history.

There was at least one tearful response video. An adaptation to Don McLean’s ‘The Day the Music Died’ was composed. And a separate DMZ (Designated Music Zone) was set up across an arroyo (which an inebriated person would not wish to transverse in the dark) from the RTR proper. 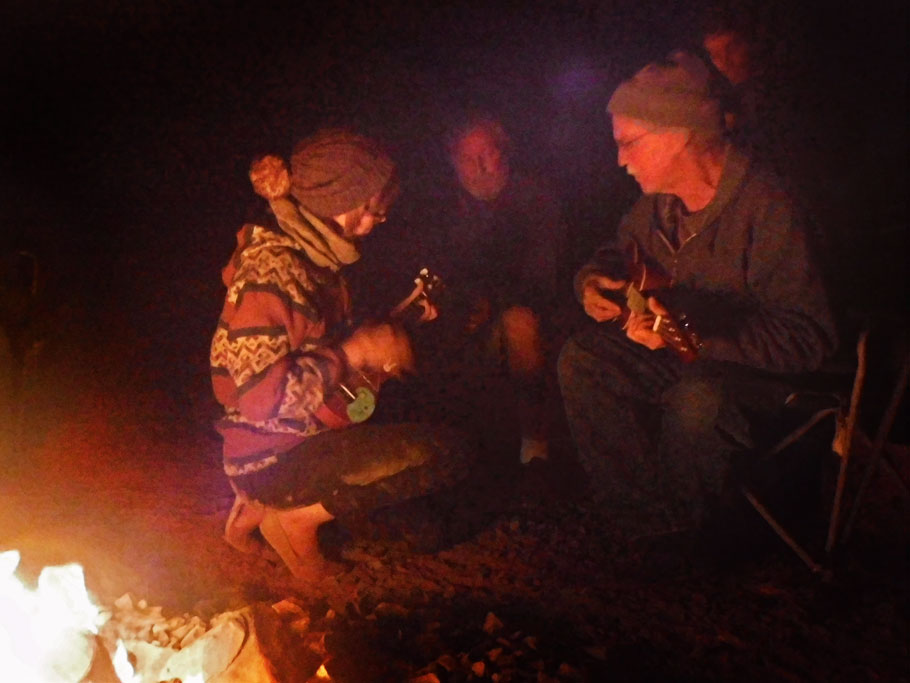 Never would have thought a uke lesson would lead to so much trouble. 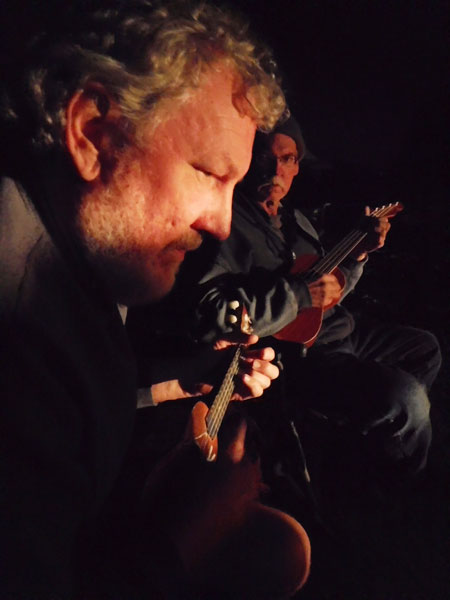 The ukes are getting out of hand.

Duwan: I love my Facebook groups. I probably follow 30 or 40 groups. Several of these are van-dwelling groups. One day someone made a post about sharing something with the “lady vanners”. This led me to the GalVanNation. 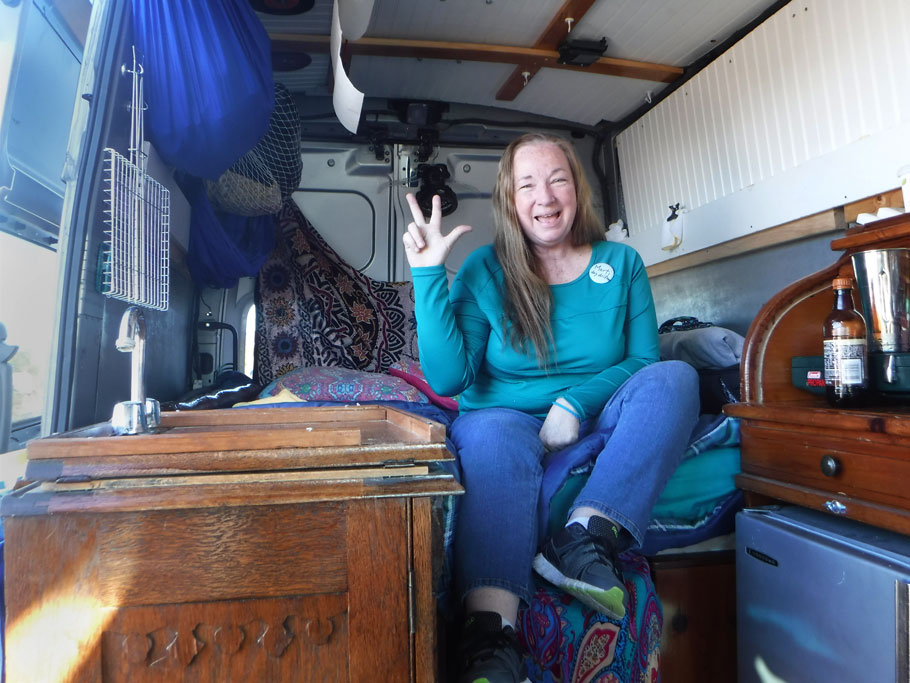 Marty in her rig. She runs the Gal Vanners Facebook group.

The Gal Vanners did a little drone photo shoot one day. Here is a few of them lined up with their vans.

Random Gal Vanners and their rigs. 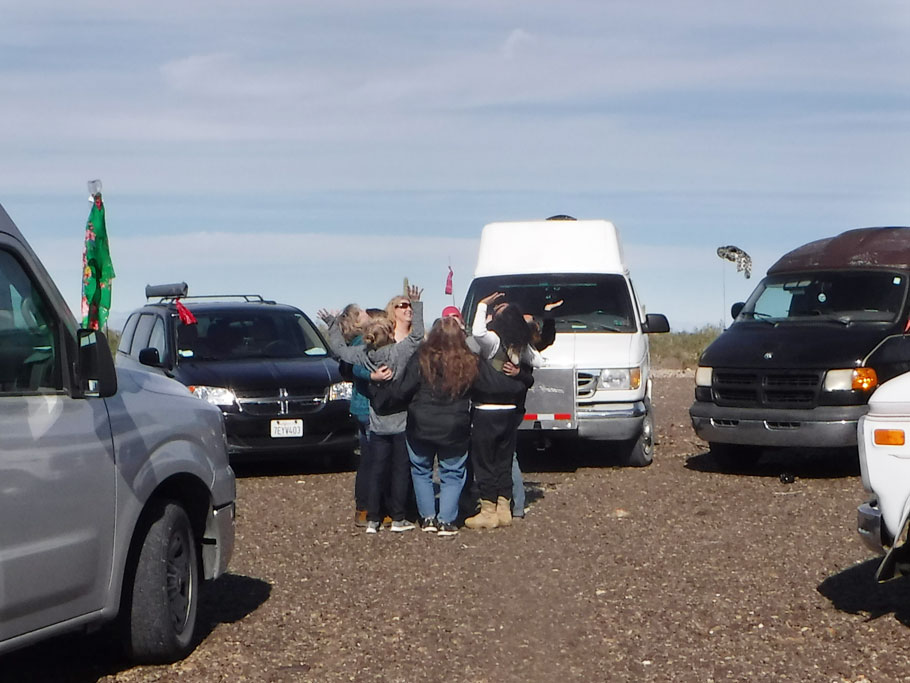 MLAAM: Besides those troublemaking Gal Vanners, who did you see at the RTR?

Greg: We enjoyed seeing Terry, who we met last year in Key West. We also liked hanging out with his friend Steve, who we have seen again.

Duwan: We also just loved walking around and meeting other van dwellers and seeing their rigs. 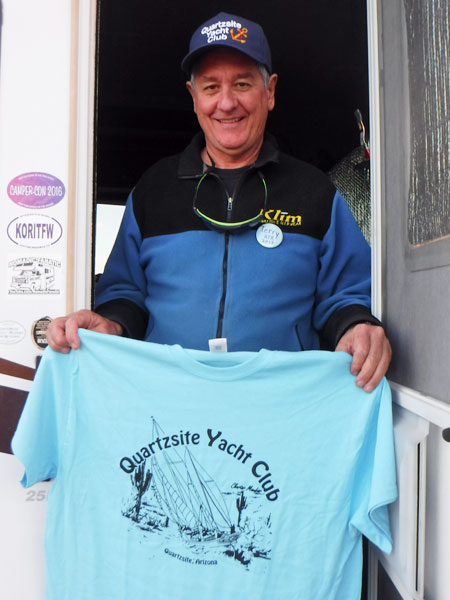 Terry with his Quartzsite Yacht Club T-shirt. No, there is no marina or body or water in Quartzsite. 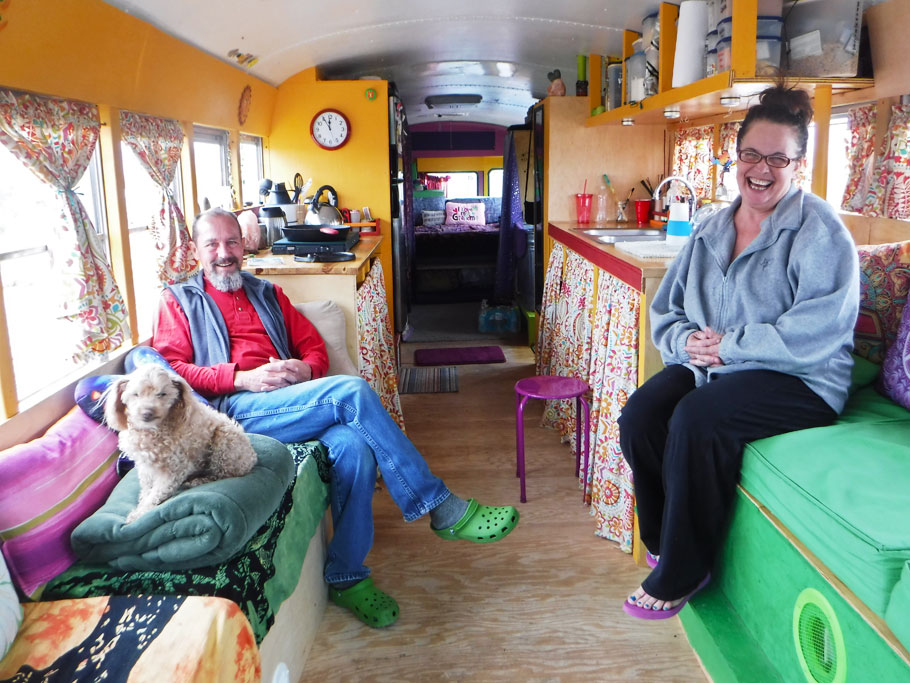 We really enjoyed meeting this couple who were at a different meetup right next to the RTR. They were traveling in this upfitted school bus with their dog and a couple of chickens. Their son and daughter in-law and grandchildren were also traveling in a converted school bus.

Some of the Schoolies.

MLAAM: Besides causing the host to leave his event, what else did you do?

Greg: Well, we managed to build two upper shelf/cabinets for our van. One time I was asked to stop sawing for a bit by a member of a local RTR AA meeting.

Duwan: The shelves took longer than we thought they would. Most days we had curious folks asking what we were doing. One day was open house day. We had lots of friendly interruptions.

We also spent an afternoon in the town of Quartzsite, provisioning and learning about its history.

Duwan: We spent about half our time at the RTR working on our shelves, which really upped our quality of life in the van – no more living out of suitcases and gear bags hanging on the walls, but I wish we had had more time to socialize and meet other vanners – especially the Gal Vanners Group. 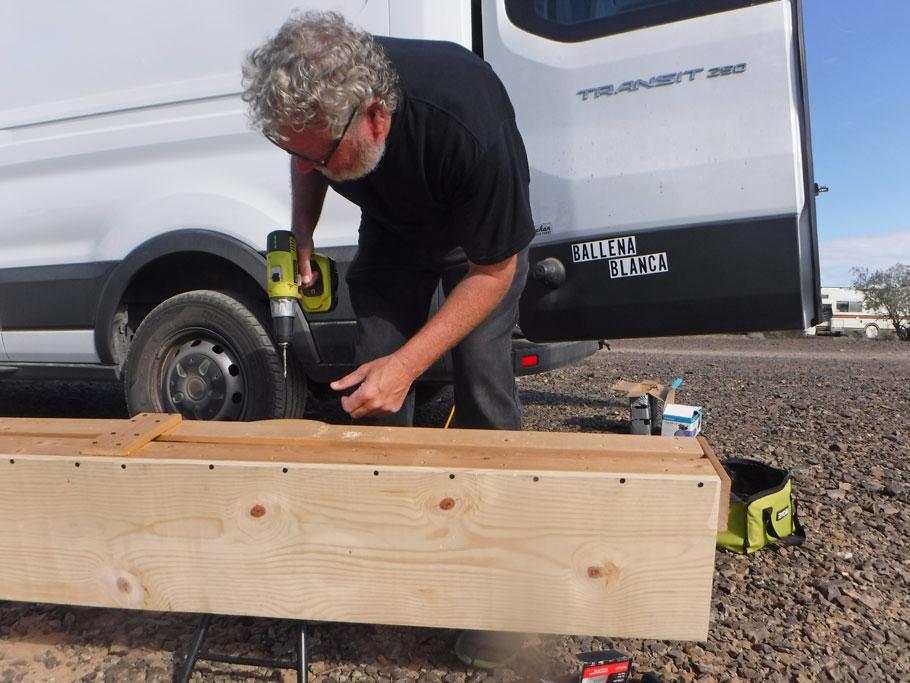 Greg working outside the van on the new shelves. 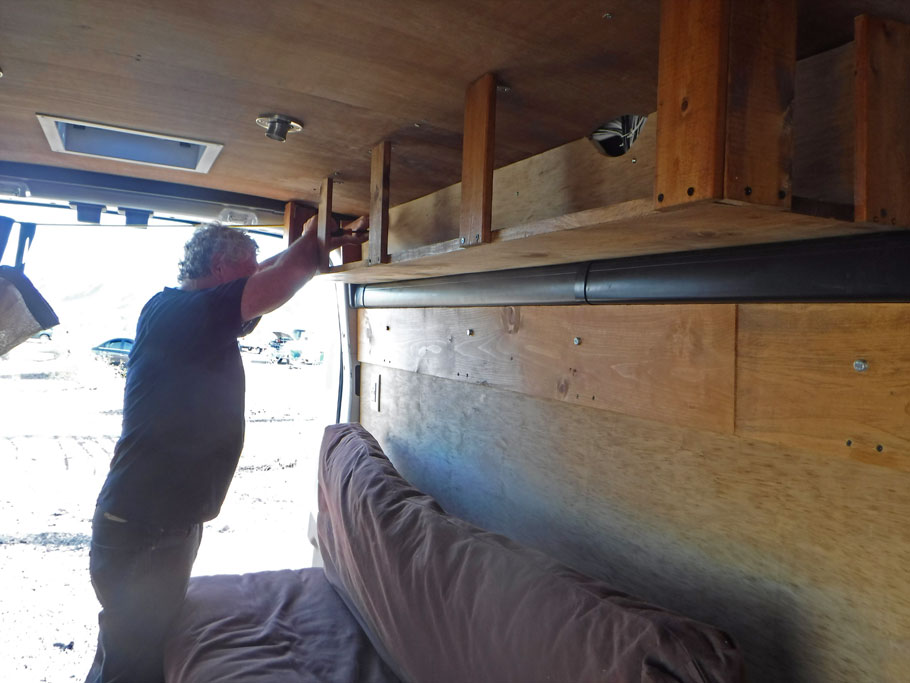 Installing port side shelves for our clothing. We had been living out of suitcases for too long. 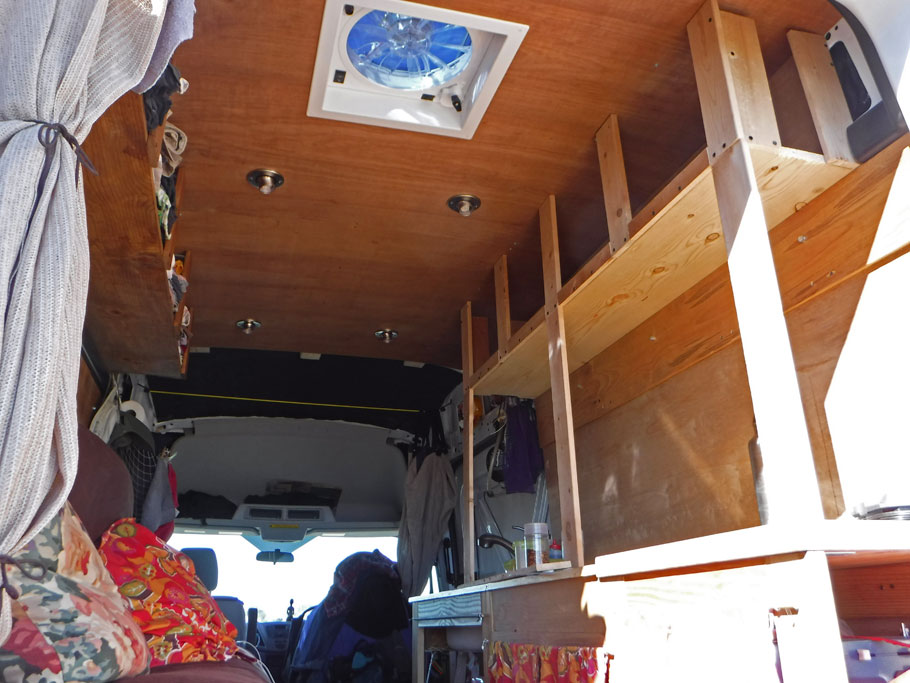 Using scrap wood to temporarily level up the starboard side shelves.

Sunset over the rigs of RTR. 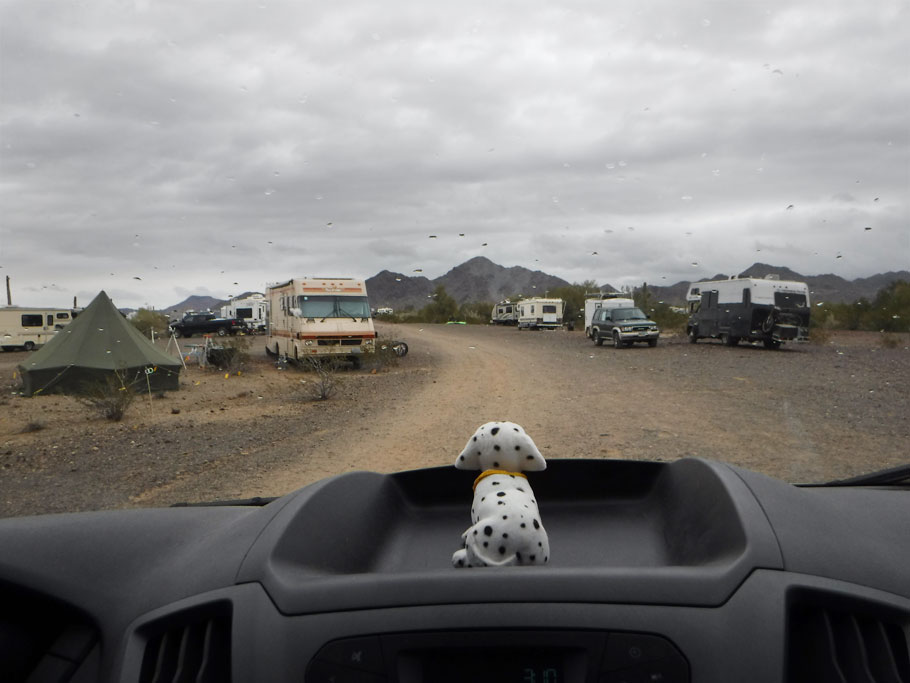 It was a little cold and rainy towards the end of our stay at the RTR. Here we head out of camp on to our next adventure.

13 thoughts on “The Rubber Tramp Rendezvous”