We left Tucson a couple of days before our trip to the Denist and camped two nights at Palm Canyon in the Kofa National Wildlife Reserve.

A friend recently told us that he’d rather have dental surgery than spend Thanksgiving with his family. In the spirit of letting other people live their lives vicariously through us, Greg did just that.

Earlier this year, in February Greg, had visited the dentist in Los Algodones, México and we were both pleased with the experience. Unfortunately, that visit was just the start of the work that needed to be done to turn the jagged landscape of Greg’s mouth into teeth again.

We were moochdocking in Tucson planning our journey south when we decided to go ahead and get most of the rest of the dental work done. It was the week before Turkey Day by the time Greg made his appointments – 3 days, Monday, Tuesday, and Thanksgiving day.

Turns outs if there is an absolute best time to hop the border for dental work, this week of American overindulgence is the very best.

Since the usual masses of American and Canadian snowbirds had not made their journeys to their desert oases yet, the line to cross back into the US in the afternoon from Mexico was really really short all week and on Thanksgiving day non-existent (we walked through customs with only two people behind us).

But there was more than just short lines. November 20 is a holiday in Mexico, Día de la Revolución – which means, of course, a parade! And to top it all off, after Greg’s 3 hours with the dentist on Thanksgiving day we were offered to make a plate from the staff’s Thanksgiving potluck to take with us when we leisurely ambled back across the border.

When we went to Los Algondones this past February we stayed in the Quechan Casino parking lot. We asked permission and it was free. It is no longer free. There are signs posted with prices, $10 for one day, $25 for three days, and $50 for a week. There is free boondocking in many locations 20 to 30 minutes from the border crossing to Los Algodones, though. Consult iOverlander for locations. We did see quite a few people camped out on land south of the casino. I believe I read somewhere (maybe freecampsites.net ) that this is all Quechan land and a permit is needed to camp – but I don’t know this for certain.

There is a Quechan parking lot at the border. You can park here for the day for $6 to $12 depending on what size vehicle you have (we always have paid $6 for the van). You can also camp overnight with prior permission for $10 for smaller vehicles and $22 for larger ones. Many people park on the side of the road for free about a half mile away and walk. We have no problem paying the $6 considering that we are saving thousands of dollars on dental work.

To cross the border, just follow the crowd. There is no checking of passports or anything going south. There will be a bevy of guys wanting to take you to their dentist the minute you arrive on the Mexican side. Just smile and tell them you are good – they won’t push.

Coming back in the afternoon there is usually a long line. There was extra security at the border coming back to the US when we went (’cause you never know when an old person who just had dental surgery is going to make a dash over the line). You will need your passport.

We really like Greg’s dentist at The Bernal Dental Group. The root canal lady was super gentle. The office manager, Juan, is a real selling point. He is super friendly and grew up in the US so his English is great (And when we were there in February he gave me cake and this time Thanksgiving dinner). 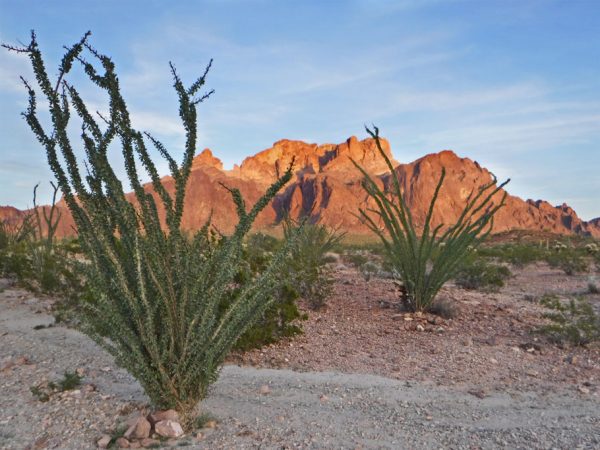 The Palm Canyon landscape was beautiful. 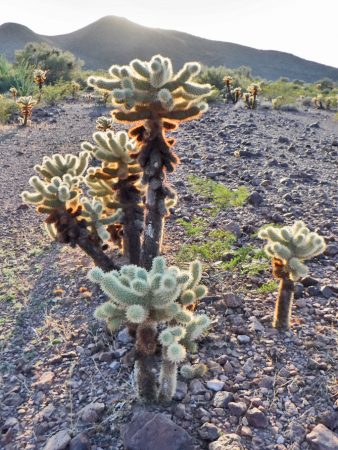 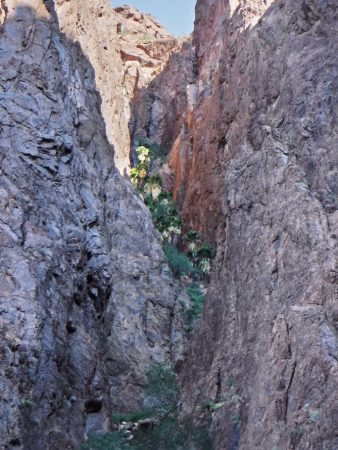 But the big attraction is the palm trees wedged high up in the canyon. This crack in the rock is the only place in Arizona where native California palm trees grow in their natural habitat.

View from the canyon. 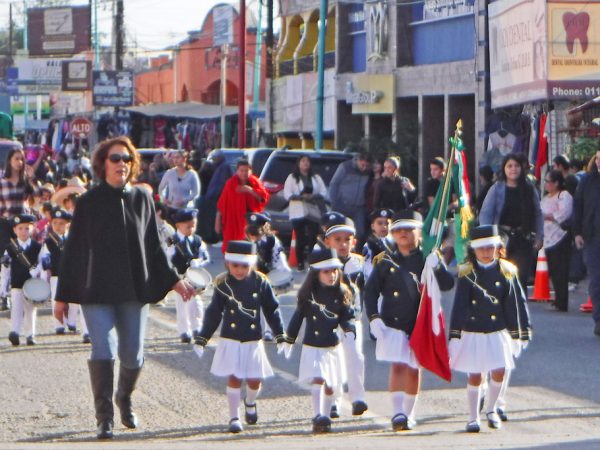 We had no idea there would be a parade when we were in Los Algodones. Juan the office manager at the dentist office told me about it right before it started. 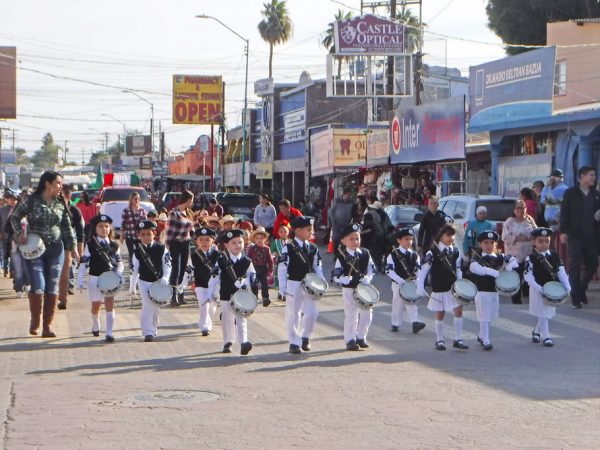 I think every kid in Los Algodones participated in the parade, starting with Jardín De Niños – Kindergarteners. 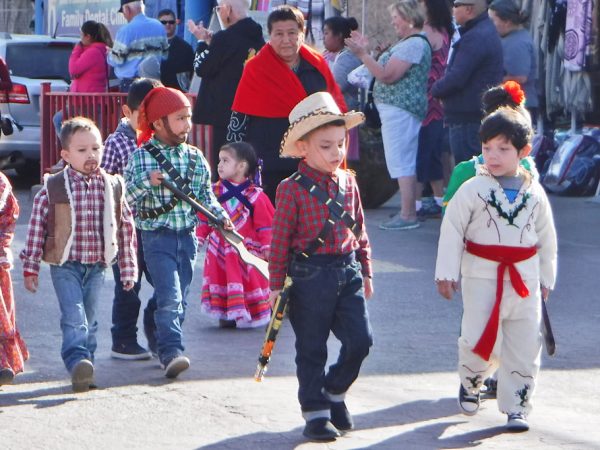 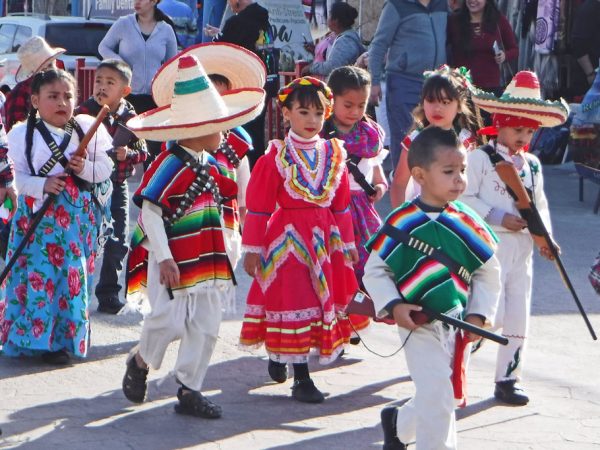 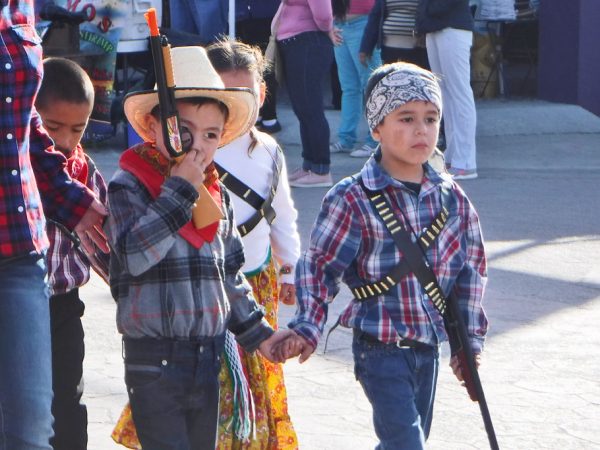 Hope I never meet these guys on the battlefield. 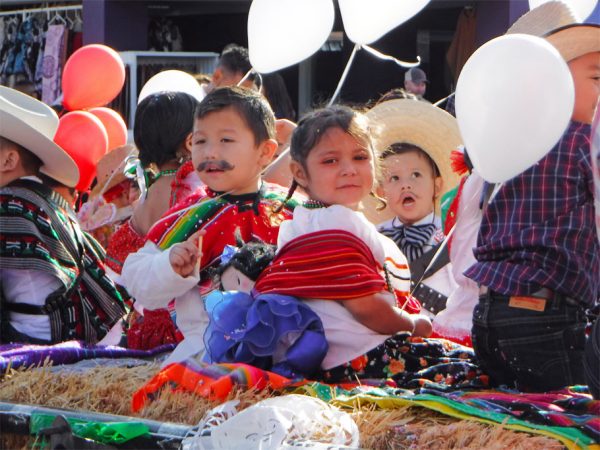 Some of the youngest kids road in trailers pulled by trucks. 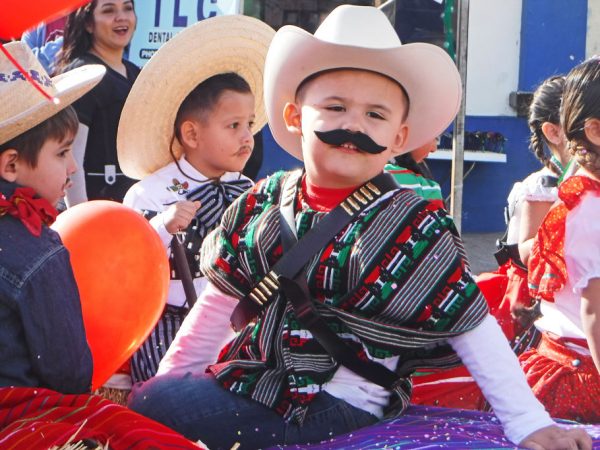 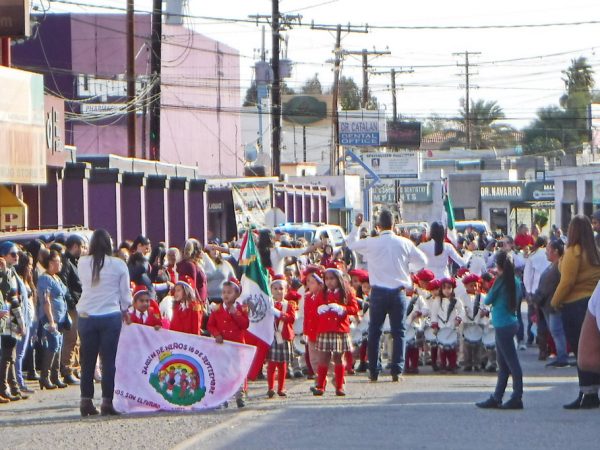 More Kindergarteners lining up ready to parade. In the background you can see the big purple pharmacy and dentist offices. 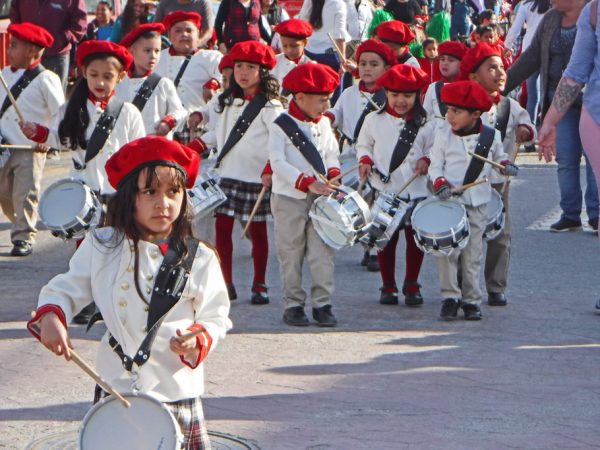 There were lots of drums in the parade but no other types of instruments. 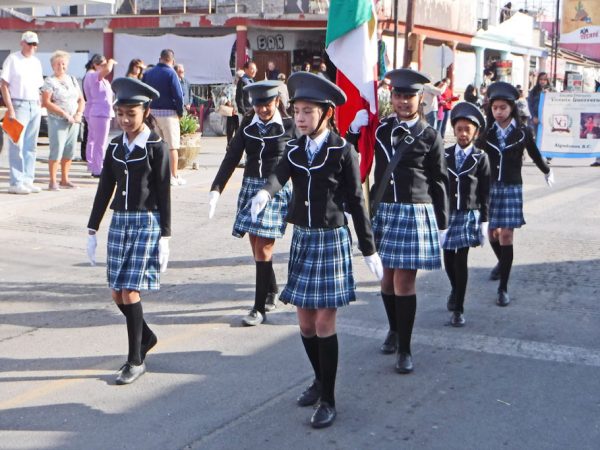 The older kids had routines like these girls who were doing military type formations. 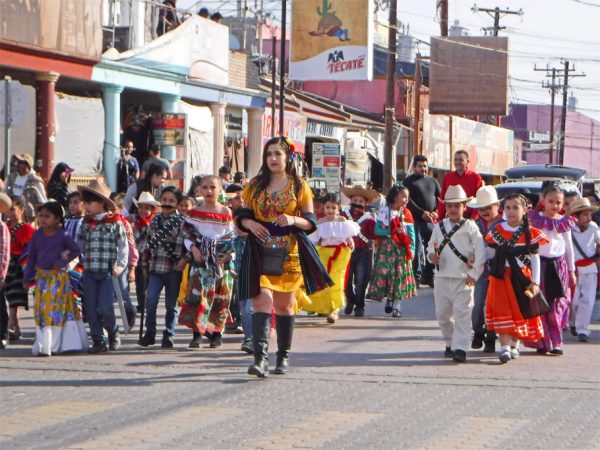 This teacher got into the spirit of it too. 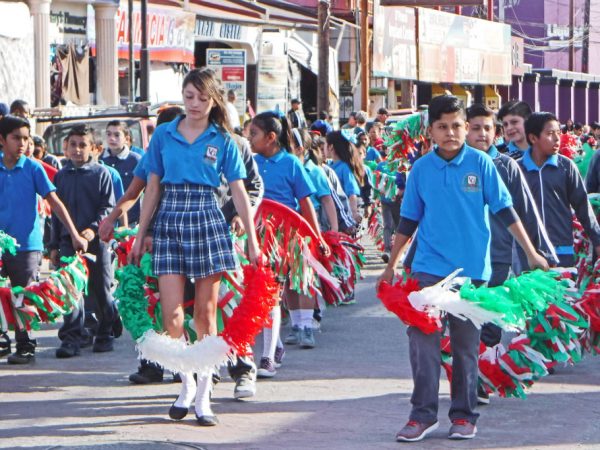 Many of the groups were accompanied by vehicles blasting recorded music and did routines. 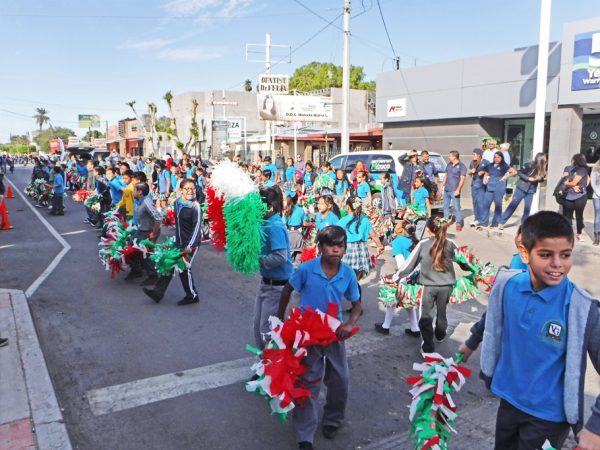 In the background on the right you can see dental assistance watching the parade. It was a slow week in Los Algodones for dental work. 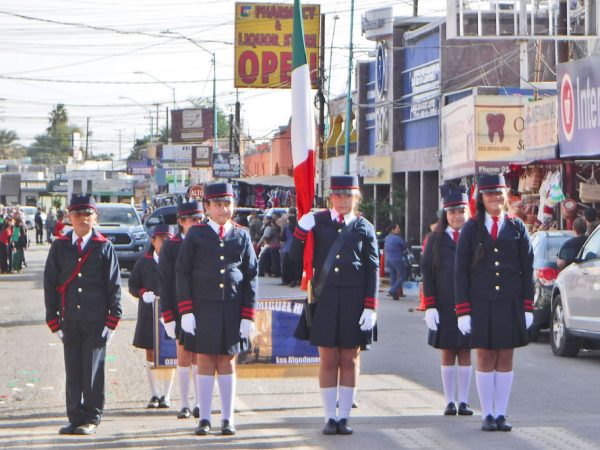 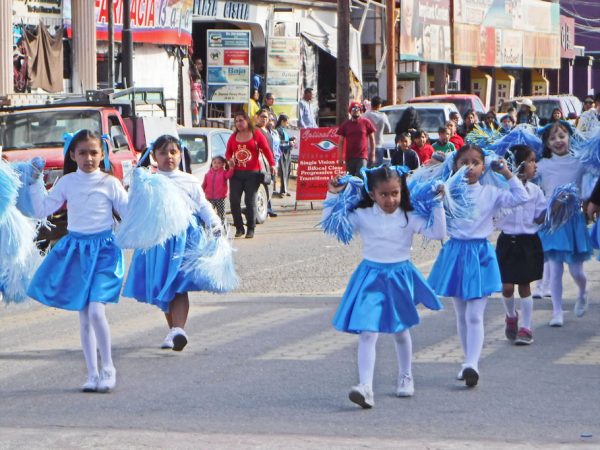 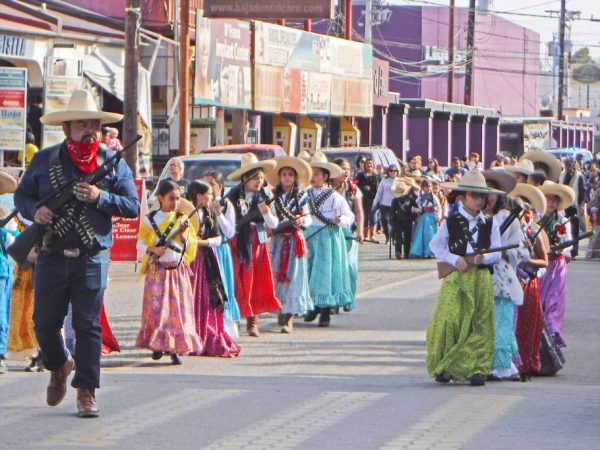 This may have been my favorite group. Love this gruff old guy leading these girls with guns. They did a sort of contra dance type routine. I wonder what class he teaches these girls. 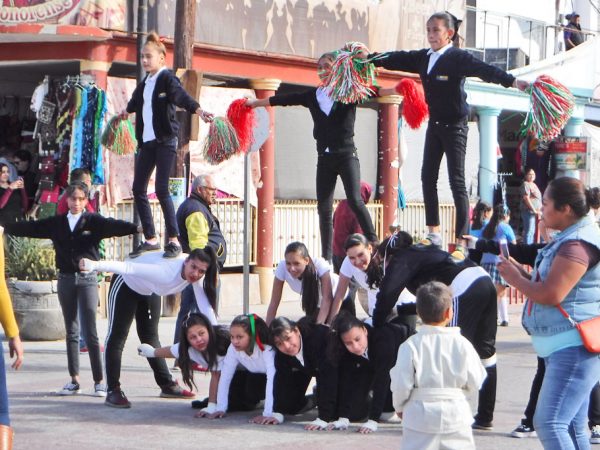 Cheerleaders. Greg was getting his third root canal about now. 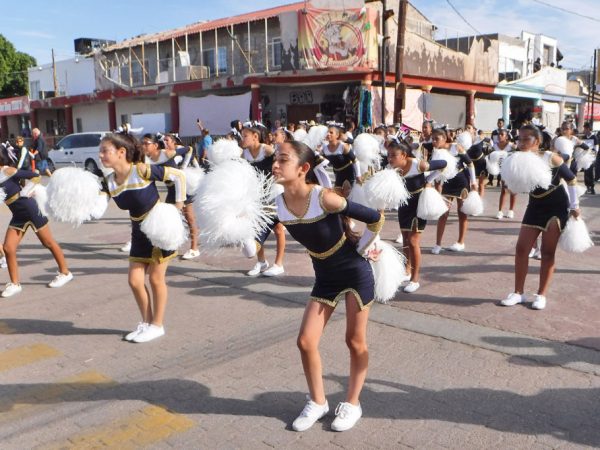 These cheerleaders did a routine with acrobatics. 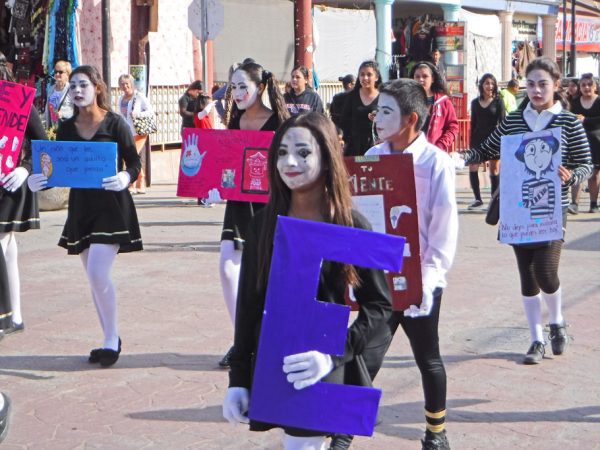 MImes? This group wants everyone to read. Some of their signs say, “Don’t leave for tomorrow what you can read today,” and “A child that reads will be an adult that thinks.” 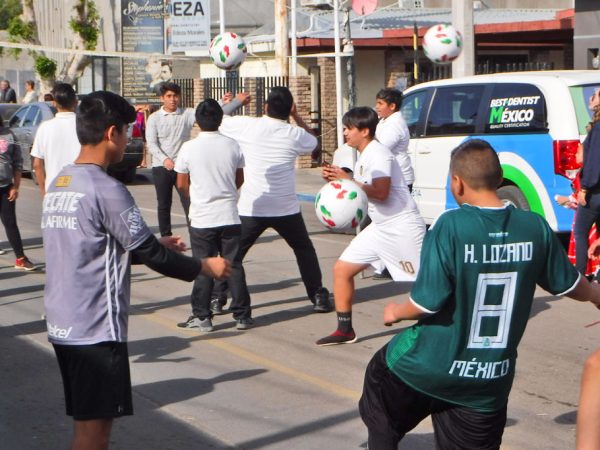 And their were sports team demonstations too. 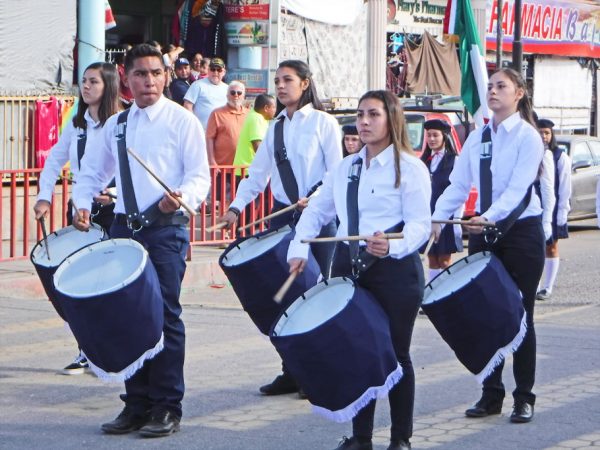 These kids were from a science and technology school. 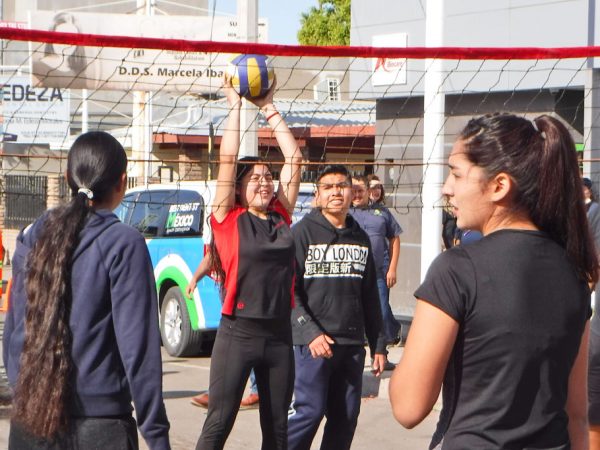 A group of kids would drag a volley ball net down the street and periodically set it up and have a game. 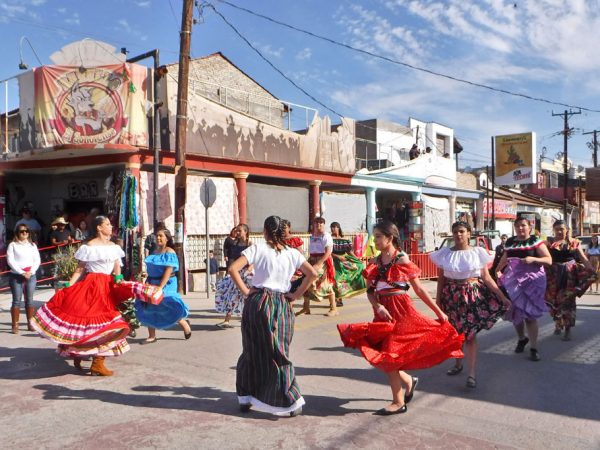 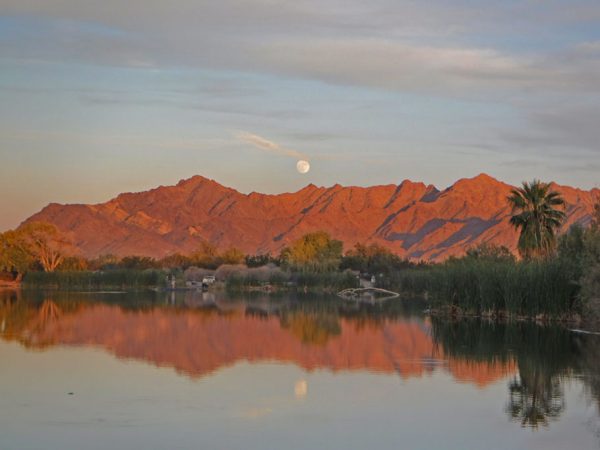 We had to wait a couple of days while Greg’s crowns were made so we found a nice spot about a half hour away at Fortuna Pond to camp. We arrived two days before Thanksgiving and found the place packed but most everyone cleared out on Thanksgiving Eve. 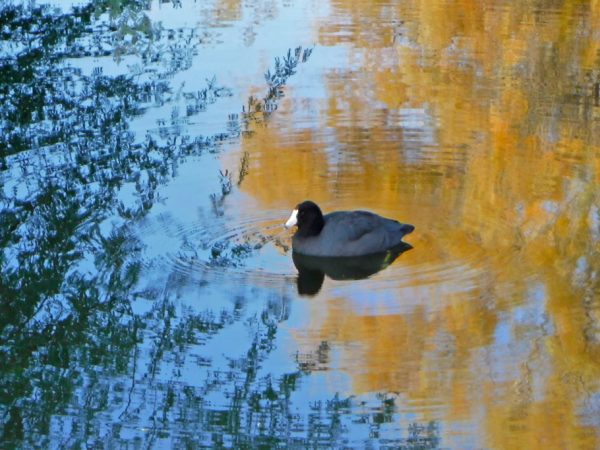 Duck at the pond. 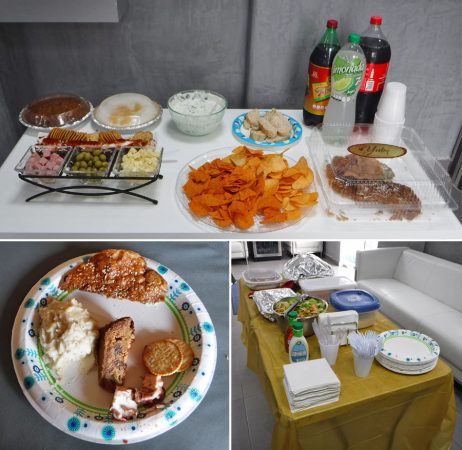 The Thanksgiving pot luck, top and right and our go plate bottom left. Greg was good to eat the mashed potatoes, the rest, date pie, some kind of yummy cheese and crackers, a Mexican dessert called a Buñel, and something I ate before I thought to take the picture was all mine.

4 thoughts on “The Dentist & A Parade”