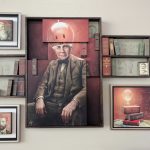 I just wasn't sure Jordan Pond would be that interesting. Now the shoreline of Maine - that's pretty exciting. But I liked the pond. The bubbles are outstanding. And I got to snap a pic before the fog moved in.
Acadia National Park. We have another national park notch on the van's bedpost. It was so foggy our first day but now the skies are clear and the views are stunning. Looking forward to kayaking the sound tomorrow!
We've entered Maine. Lighthouses and rocky coasts lines. Maybe we will see a moose. Off to Acadia this morning!
Spent a day in Salem, Massachusetts. Many lost witch hunt lives commemorated. None were burned. Most were hanged. But one stubborn accused individual was pressed to death.
Our very favorite camping spot this last week at Mittry Lake. This spot was always available. It was right on the road but had this fantastic view of this pond below where we saw a Belted Kingfisher, a Great Egret, a Snowy Egret, a White-faced Ibis, a Northern Harrier, a Turkey Vulture who looked like he was going to fly straight into the van, and lots of other birds.
Finally went and saw something interesting. The Valley of Names.
The desert here at American Girl Mine is full and drab but the ocotillos are alive and sprouting green
Just playing a little guitar to the night sky in desert
Last week kayaking on Mittry Lake. It was a tad chilly and a little overcast but those clouds were stellar.