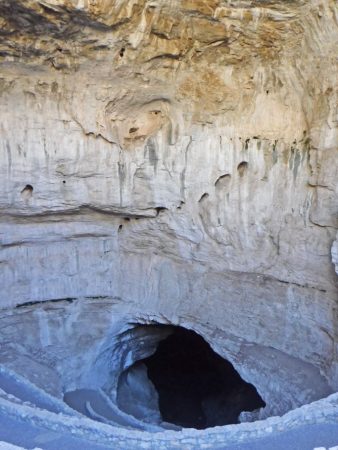 Looking down into the entrance of the cavern. Behind us is an amphitheater for folks who want to watch the bats leave the cave at dusk in warmer weather. Bats and pre-hispanic visitors have ventured to a few hundred feet below this point. But no one else has seen the cave’s interior until more recently.

“We know exactly how old these are”, said the ranger as we went through the entrance into the King’s Palace in Carlsbad Caverns. “This entrance was blown open using dynamite in 1932. These stalactites started growing then.” He pointed to the ceiling of the entrance, where small stone nipples, none longer than 1/2 inch had been forming by the slow drip of water for 86 years. Inside the rest of the cavern, the stalactites are up to 500,000 years old.

There has never been a better time to be in this spot. It may have been pleasant 265 million years ago when this was part of a 400-mile sponge and algae reef on the edge of the Permian Sea. But since it was compressed into limestone, everything happened in total darkness. It was dark as the rock shifted northward and upward. Dark as it was covered by other sediment. Dark as the Guadalupe mountain range was pushed up. Dark as cavities in the stone filled with air and rising hydrogen sulfide gas, which became the sulfuric acid that ate away huge chambers in the rock. And dark as water seeped through the cave ceiling sculpting the formations found here now.

Young 3rd grade dropout Jim White brought light here for the first time, using a homemade lantern, in 1901. His zeal for the cavern finally brought national attention. Carlsbad was declared a National Monument in 1923. Congress made it a National Park in 1930. Today there are well-lit trails and an elevator. Visit Carlsbad. There’s never been a better time. 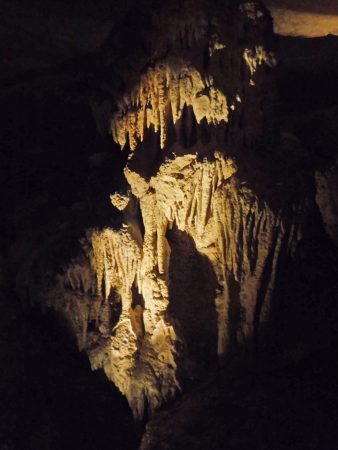 The natural entrance drops quickly to about 600 feet, well past the point where sunlight penetrates. Then the cave’s features become interesting. 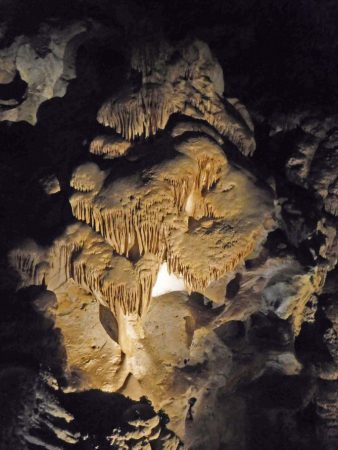 In our first day at Carlsbad we descended through the natural entrance, and walked a self-guided tour, stopping for lunch at the rest area 755 feet underground. 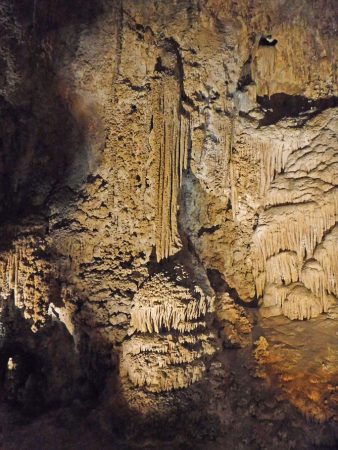 After sulfuric acid created the cave’s large cavities, 500,000 years of slowly dripping water created all the formations we see. 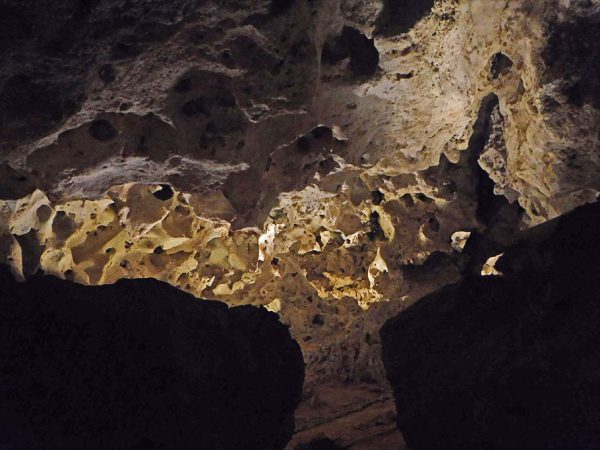 This group of formations is named the Boneyard. 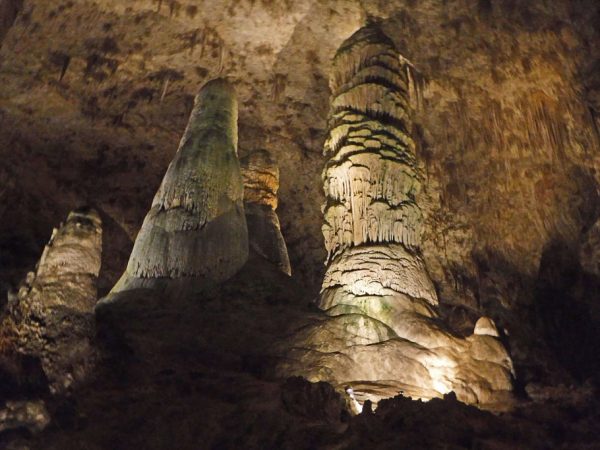 After lunch we walked the self-guided tour around the Big Room. This open underground area is the size of seven football fields. The next pictures are from the Big Room. 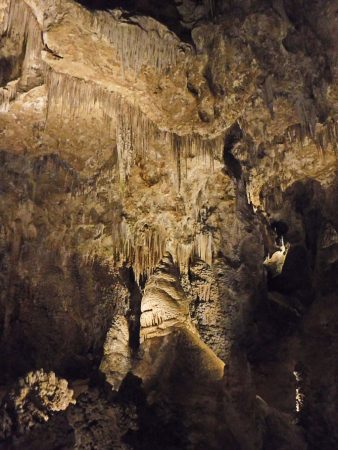 There are lights highlighting the caves features all around the Big Room. There is no way a camera can capture the feeling of being surrounded by this huge natural sculpture garden. But pictures can give you a bit of an idea what it’s like. 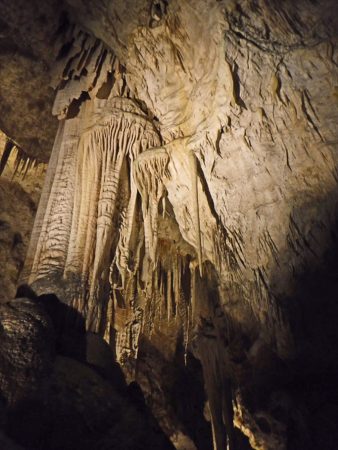 Looking up inside the Big Room. 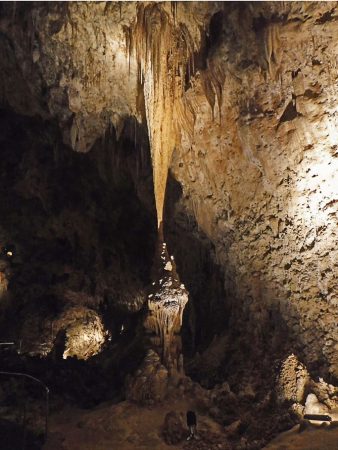 Tall stalactite in the Big Room. 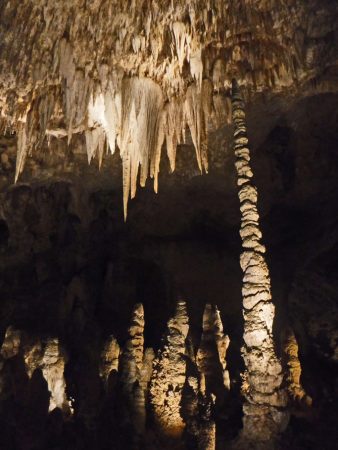 Stalactites and stalagmites in the Big Room. 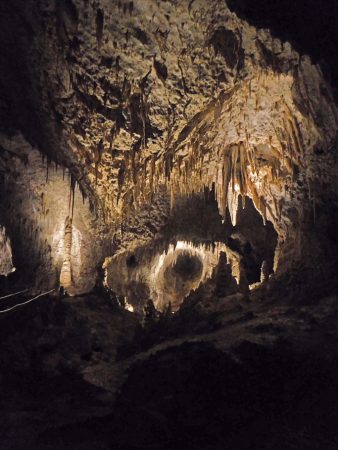 The stalacites in the distance help show the scale of this place. We were told that only an estimated tenth of the cave has been explored. And the park trails we are walking are a small fraction of that. How many chambers are under us that don’t have entrances at the surface? 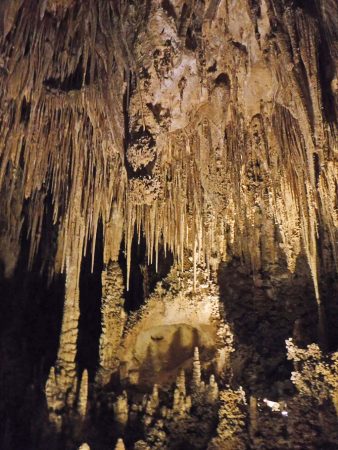 The rough surfaces on some of these stalactites and stalagmites is called popcorn. The popcorn was created by sediment from drips that splashed. 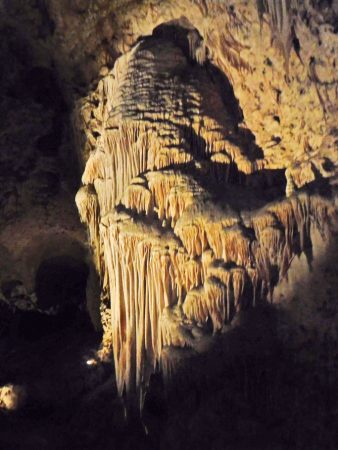 Formation in the Big Room. 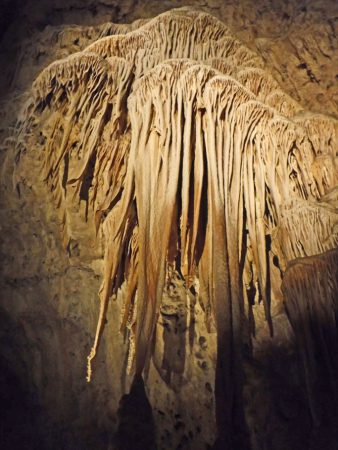 Set of stalactites in the Big Room. 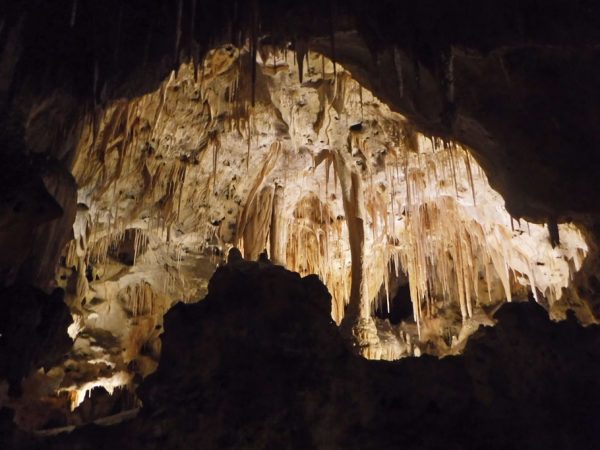 Chamber on the edge of the Big Room 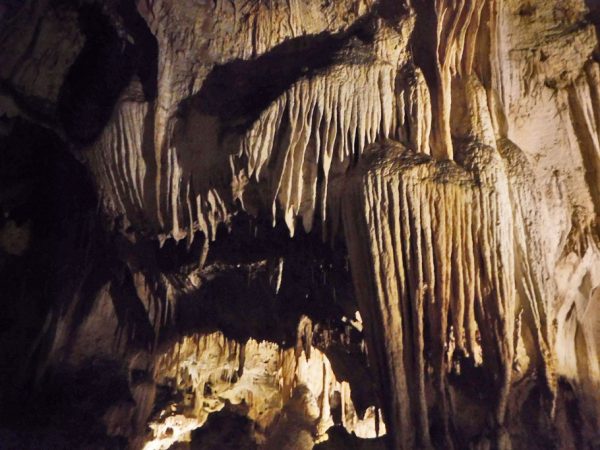 Very large stalactites with more in the distance. 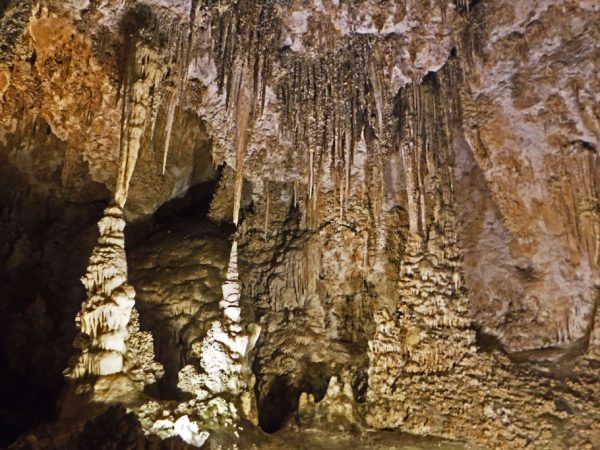 On the left a stalactite and stalagmite join to form a column. The pair just to the right didn’t get a chance to meet. This chamber is called the Chinese Theater. 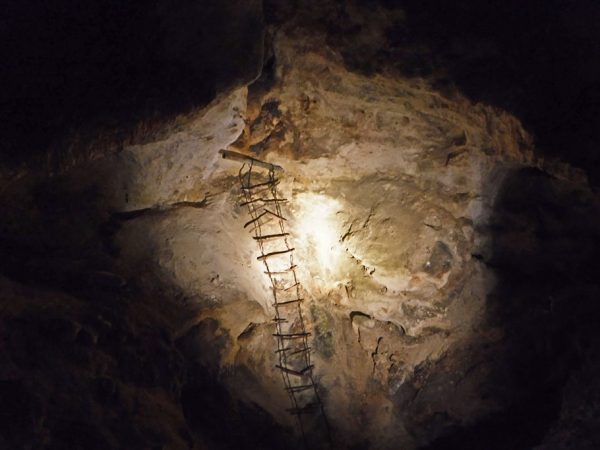 The cave’s original explorer, Jim White, used homemade ladders like this to descend into lower chambers. He followed his own footprints to find his way back to the entrance. 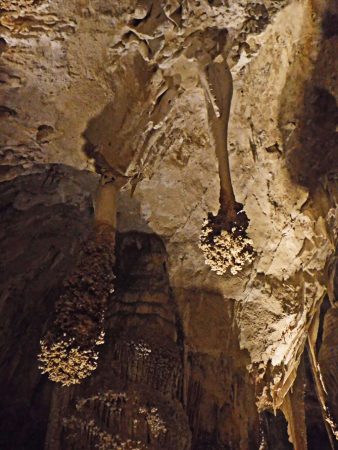 Lion’s Tail formation in the Big Room. After exploring the Big Room we rode the elevator back to the top. 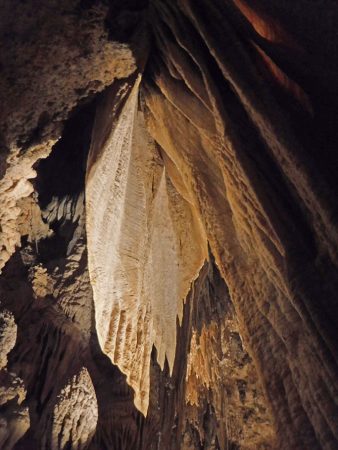 On the second day of caving we opted for the ranger-led tour of the scenic rooms. The tour winds through the King’s Palace and Queen’s Chamber. Here is a drapery formation from that tour. 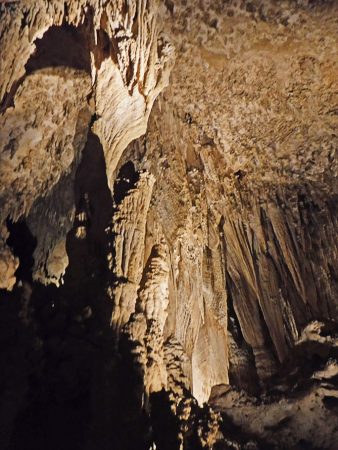 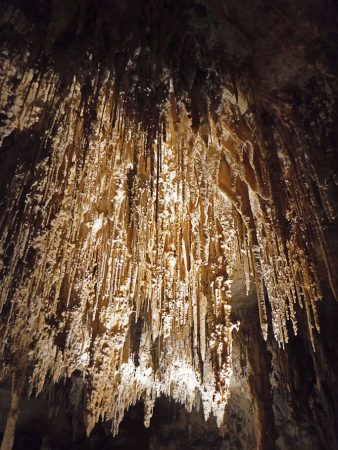 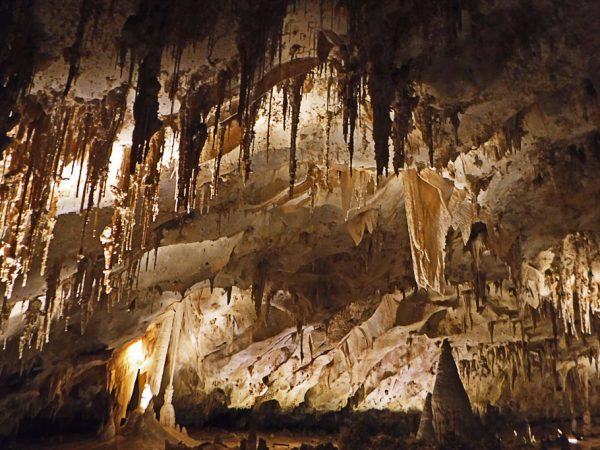 Stalactites, stalagmites, and sheets. On this tour the ranger shut off the lights for a few minutes of complete darkness and silence. 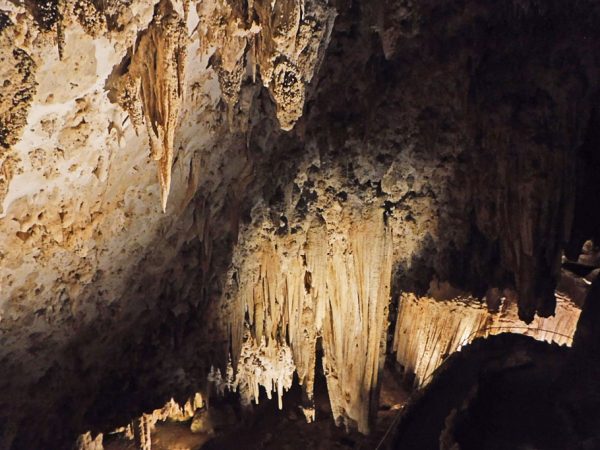 Looking down at stalactites. 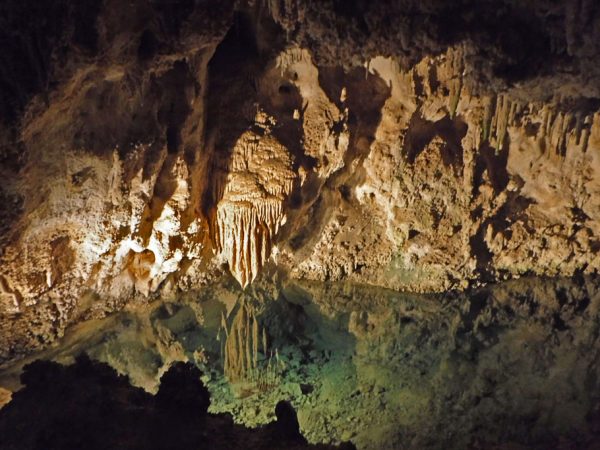 Reflection pond which never ripples. We’re told that the cave “breathes”, exchanging most of its air each day, but the weather conditions down here at 800 feet are always the same. 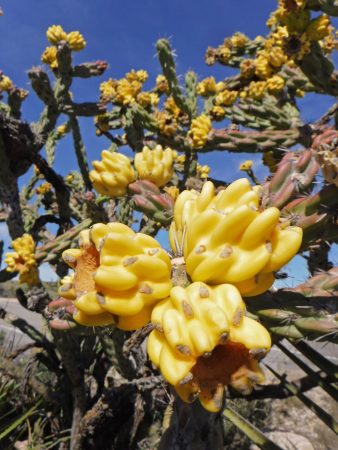 Cacti above ground at Carlsbad. The 2010 census showed 27K people living here. Located over the oil-rich Permian Basin, they recently voted overwhelmingly to support drilling interests. The next census is in 2020. and it may include a question that would deter people from participating. But in the absence of hard data, the water company has estimated that they are now supporting 80K people. Many of these are new oil workers living in “man camps”. Lodging is at a premium. Crime is up. Park attendance is down. 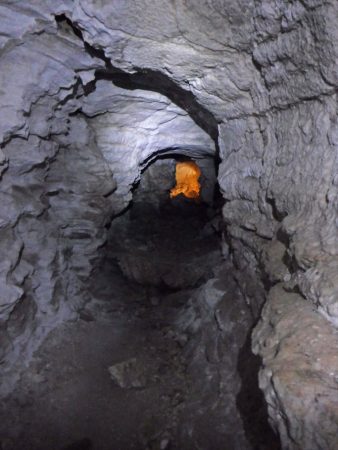 There were a couple of caves near our campsite. Here is the interior of one.