Posted by Duwan Posted on March 9, 2012 0 Comments on March 2 – 6 — The Sea of Abaco
Posted in Life on the Water, The Abacos, The Bahamas Tagged Cold Front

We finally have a good source for weather information, Cruiser’™s Net on channel 68 on the VHF radio at 8:15 every morning. The program, based out of Hope Town, Abaco, is run by cruisers in the Abacos. People in each area give conditions for inlets running up and down the sea of Abaco. There are also announcements of community activities, sponsor endorsements and an open mike for greetings, inquiries, birthdays, etc. Besides getting much better and more relevant information than we were getting from am radio, I am sure Greg also appreciates that he no longer has to listen to reports of the excitement about Prince Harry’s imminant arrival in the Bahamas to celebrate the Queen’s Diamond Jubilee while we wait for the weather report.

On Saturday March 3, following our big day of rest after moving to the anchorage at Lynyard Cay, we tuned into the Cruiser’s net for the first time. A northern front with winds 40 to 50 knots was forecast for Sunday afternoon. The announcers were telling everyone to take precautions and to secure their dinghies. Already our inlet at Little Harbor was looking rough and our boat was rocking. Winds were currently coming from the southeast, but were predicted to swing around to the northwest. We had land to our south and east, but the northwest was wide open. When Cruiser’s Net was over about 9 am we went topside and realized that although the anchorage had been fairly full just an hour ago, everyone had left, but us.

We had planned another day of rest, but now we need to figure out if there was a better place for us to be. We surveyed the chart for a more protected anchorage, but it was already past high tide and because of our deep draft we didn’t have enough water to get very far. There was really nowhere we could go, so we decided to change our location in our current anchorage (after all we had it all to ourselves) to one that was further away from the current from the inlet and somewhat more protected from Northwest winds due to shallow water on all sides. 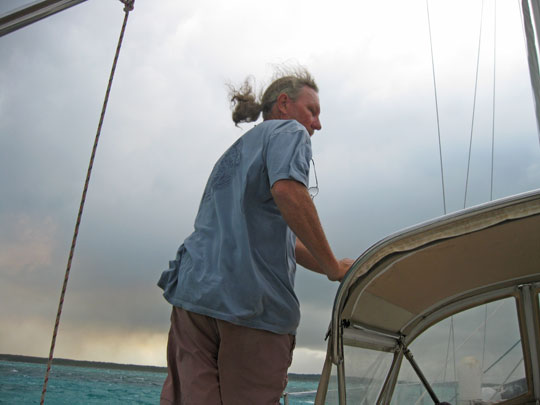 Our new spot was calmer. We spent the day reading, doing crossword puzzles and cooking. We spent more of the next day relaxing and waiting for the front. About 3:30 the winds started picking up. We went topside and saw that the boat had clocked around on its anchor and was now pointing northwest. The water was all a ripple with small waves and the boat was rocking. The sky was dark in the northeast. I tried to get photos of the water to show what it was like, but the best I could do was get a shot of Greg’s pony tail and shirt being blown in the wind. We settled down below and listened to the wind roar above us for the rest of the evening.

The next morning we still had high wind, but it was time for us to move on. Our current goal was to get to Marsh Harbor where we could find internet, a mail facility to have my Wirie delivered to, groceries, rum and other people to talk to. We had two options to get there. We could go out the inlet back into the Atlantic Ocean and sail there or motor through the Abaco Sea. Sailing would take less time, but since the winds were still high it didn’t seem advisable. Motoring would take more time since we would have to do it in short hops in order to take advantage of high tide to get us through the shallower areas. We decided to motor.

We arrived at our new anchorage later that morning. Although the winds had been strong making the boat harder to steer, we had a pretty uneventful trip. Our new anchorage was nice and calm. We thought the worst was behind us. We spent another day relaxing, reading, kicking crossword puzzle ass, cooking and doing organizing and cleaning chores.

During the night the winds picked up again to 20 â€“ 25 knots. We had thought we would try and sail through the Sea of Abaco to our next anchorage, but as I took the helm that morning it became apparent that sailing was not a good idea. So after Greg pulled up the anchor, I turned the boat around and headed back out into the strong wind.

We have developed a sort of system for moving from place to place now. The day before we make a trip, Greg studies the charts, decides where we need to go and when to take advantage of the tide and then plots out way points on the GPS. I man the helm because I am a little better at holding a course and being behind the wheel seems to help me from getting seasick. I navigate from waypoint to waypoint using compass coordinates to get on a heading, find a landmark on the horizon I can steer to, and then check the GPS every once in awhile to make sure we are still on course. Greg keeps a look out for other boats, shallow water and anything else that may impede our progress.

As we approached the Man-O-War inlet at 8:15 an announcement came on our handheld VFH radio that the Cruiser’s Net was about to come on channel 68. We had missed it the day before, so we eager to hear the weather report. As I got closer to the inlet, the report for Man-O-War came up. It was recommended not pass through the inlet, as it was very rough. Our plan was to simply crossing in front it, but as I got closer being anywhere near it seemed like a bad idea. Between the wind and the current I was finding it very hard to stay on course and the moving was slow. At one point I completely lost steerage. I wind had me blown south, but I couldn’t steer back in the right direction until we throttled up a notch. We powered through it and finally left the inlet behind us.

Soon we were in our anchorage at Man-O-War Cay. There were other boats here! And if the wind ever calms down we thought we would dingy into the harbor to civilization, but the wind stays high. We spend the day resting and doing little as the boat rocks. We plan to go to Marsh Harbor the next morning, but I do not want to go if the wind is still rough. The wind does not abate. It was extra cold over night. We close up the companionway hatch and put on an extra blanket on our sleeping berth. The next day I discover I have a very week and tenuous internet connection so I download email, make a blog post, check Facebook and work on this post, hoping the wifi connection stays with us long enough for me to bring you all up to date.