Posted by Duwan Posted on April 21, 2012 2 Comments on April 19 — Hatchet Bay Cave
Posted in Eleuthera, Life on the Water, The Bahamas

Thursday we hiked to another Heritage Site, Hatchet Bay Cave. It was a couple of miles or so down Queenâ€™s Highway. We took provisions for the day, water, crackers and peanut butter and our hand held VHF radio in case we wore out and wanted to call a cab on the way back.

Perhaps it is unusual for tourist to be walking down this major artery here in Eleuthera or maybe Eleutherans are just eager to lend a hand, but four cars stopped to offer us rides as we hiked down the road. We were enjoying the exercise, so we thanked them and declined the lifts. 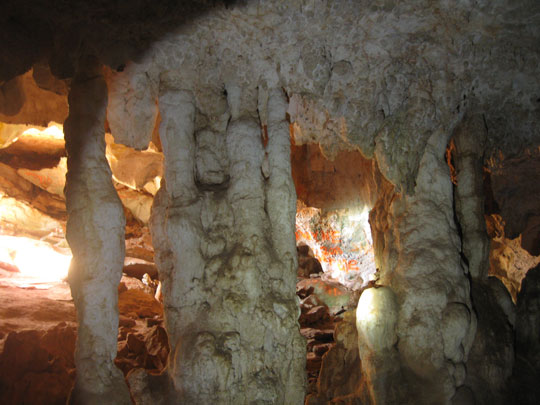 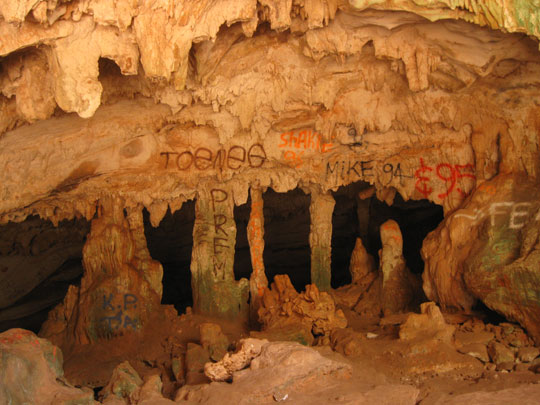 One thing I really love about a few of the places we have visited in the Bahamas is the spontaneous creativity. As we walked along the highway we began to notice a few words painted on the pavement every 100 feet or so. They were Knock Knock jokes, the words carefully spaced out like old Burma Shave billboards.

We encountered four jokes in the couple of miles we passed over on our way to the cave. People drive very fast on this road and there is no shoulder. Who knows how far down the highway this industrious individual(s) risked his or her neck for the amusement of the rare traveler on foot or slow moving car. 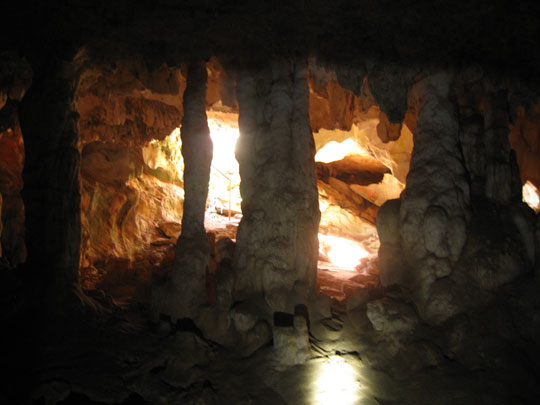 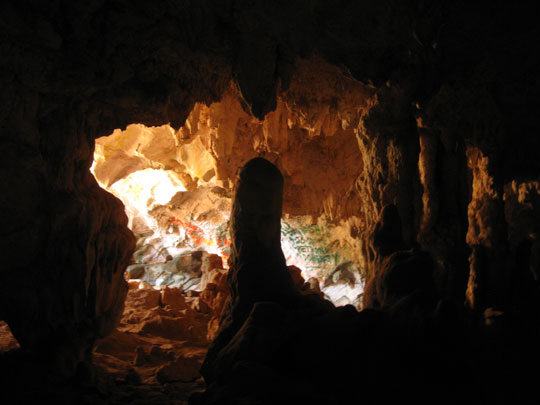 Most of the terrain we saw was scraggly and not terribly interesting. A few wild flowers dotted the side of the road. Then we spotted a large garden growing what appeared to be onions. On closer inspection we saw they were also growing pineapples! I had never seen a pineapple plant before and was totally delighted.

The cave was a mixture of natural beauty and graffiti in glowing light. Once out of sight of the entrance it was very, very dark. Gently sloping steps descended down into it. We followed them until we saw a spray painted sign that said, â€œWelcome to Hell.â€ Below the sign was a steep drop off and a ladder to the dark abyss. We turned around.

On our way back, no one stopped to offer rides. Maybe the friendly people only travel north. But this was no problem as the sun shone down on us on this beautiful Eleutheran day.