Posted by Duwan Posted on May 20, 2012 3 Comments on May 4 & 5 – Harbor Lag in Rock Sound Harbour
Posted in Eleuthera, Life on the Water, The Bahamas

In our neighborhood, Cabbagetown, back in Atlanta, we have a thing called â€œneighbor lag.â€ Neighbor lag is when you leave your home for a five-minute walk across the neighborhood that ends up taking 30 minutes or more. First you run into a friend, stop and chat, then someone else shows up walking their dog (dogs so hate neighbor lag) and she stops and you all chat together. Once you get moving again you are likely to see someone else and end up touring the new construction work on their house or marveling at their new giant snail carved out of granite. Passing by Ronnie and Marshallâ€™s house you will inevitably be invited up to the porch or inside for a visit and a soft drink. You can never outstay your welcome here. Strolling by the magnetic force of Thompson/Forcee porch is especially precarious, you may never reach you destination at all.

By Friday afternoon the two boats, which had been anchored when we had arrived, had left and eight or ten had replaced them. We had forgotten a few things at the store the day before so we headed back in. Upon arrival at the dock we were greeted by a husky with one blue eye and one white eye named Mr. Bojangles. Ashore we met the crew of the sailing vessel Quest, Mr. Bojangleâ€™s owner Sid and his sailing companion, Robin and crew of the catamaran What If, Kris, Dean, 10-year-old Derrick and their two dogs. We stopped and chatted with them for a while about our individual journeys. Dean and Sid discovered that they knew people in common in Montana. Which, of course, goes to show you that it is an oddly small world, especially if you live in Montana.

After our visit to the store, on our dinghy ride back to the boat, as we approached a neighboring catamaran, David, the boatâ€™s owner pulled up a chair to the bow of his boat and sat down to talk to us. We slowed the dinghy and he asked us questions about the town. He had not been ashore yet. Finally after hovering back and forth in the dinghy for a while, he invited us aboard.

On the boat we met Deb, who was busy sewing up their sailâ€™s sackpack, which had recently been damaged. David showed us around as Deb continued to stitch.

This boat was huge. The deck was spacious and included a built in teak table that could probably seat eight close friends. You could have a cozy little slumber party on this deck with those eight friends. From the deck you walked on the same level directly into the galley, dining and nav station area. The galley was roomy, nice and airy and included both a large refrigerator and freezer powered by a generator. David claimed to have the coldest been in the Bahamas, although we didnâ€™t stay long enough to be offered any evidence of this assertion. The dining table was big enough to serve the slumber party breakfast in the morning.

In the port side hull were two guest berths and lots of closets for storage. In the starboard side hull was the main stateroom bathed in light from multiple portholes. There was a washing machine in the passageway closet and a huge head. The head was gleaming white and included a separate shower with a view of the anchorage.

David told us he used to buy disposable boats when he was younger. He would sail one of these boats to Mexico from California, anchor, ask someone to keep an eye on the boat, then leave the boat and fly home. Advancing age and several joint replacements eventually led him to this boat. He decided on his criteria and made a worldwide search. He found this boat in Finland. He flew over, bought it, sailed it through Europe, down the coast of Africa, across the Atlantic Ocean to the Caribbean and back to Florida, his current home base.

David was very chatty and we probably could have hung out on his boat all afternoon, but we had produce in the backpack and needed to get it into our fridge. We said goodbye while David continued to chat, giving us advice about how to use vinegar to keep salt from the water at bay, as dinghied back to Blue Wing.

The next day we had planned to sail up to Hatchet Bay, but we let the harbor lag keep us another day. It was Cinco de Mayo and Sid and Robin had invited us to a get together on their boat. We decided to do some exploring in the morning and celebrate the fifth of May on Quest that evening.

We headed out towards another ocean hole and some caves south of town. On our way we met sailors Jan and Dennis who were looking for caves on the shore. We joined them on their quest heading down Queenâ€™s Highway venturing down any trail that looked like it would lead to water. We finally found a small cave and each had our pictures taken in front of it, after which we continued down the road to the ocean hole.

The ocean hole was about Â¾ of a mile from town and was marked with an Eleuthera Heritage Site sign. It was a quiet, buggy hole of dark water. We didnâ€™t see any fish. A local told us that there were turtles here, but we didnâ€™t see any turtles either. Jan and Dennis decided to head back, but we stayed. There was a trail that lead from the ocean hole and, of course, we had to follow it.

We found the caves. To get to them you descended about 12 feet on a very nicely built, sturdy latter. It was worth the buggy hike. The caves were gorgeous. 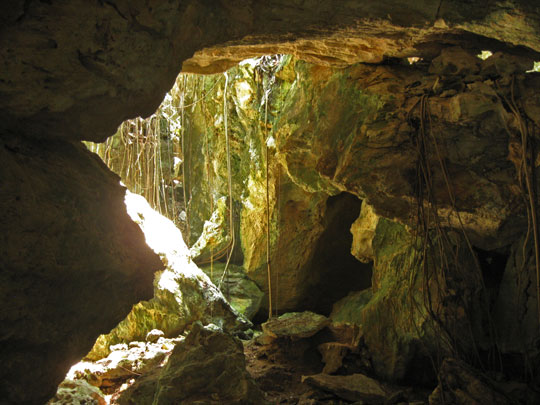 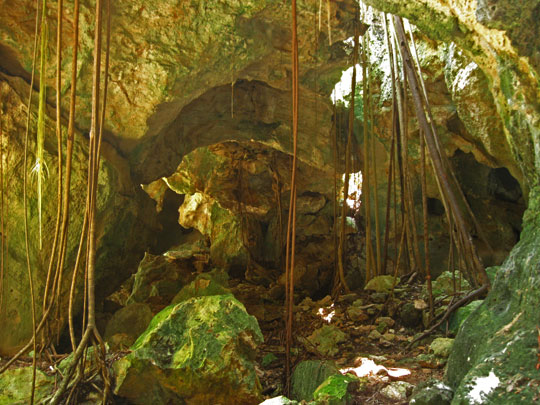 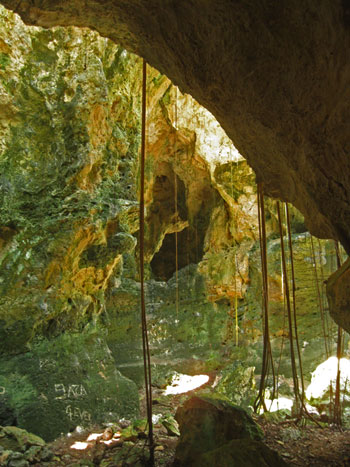 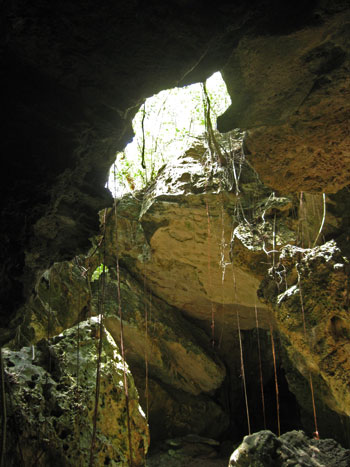 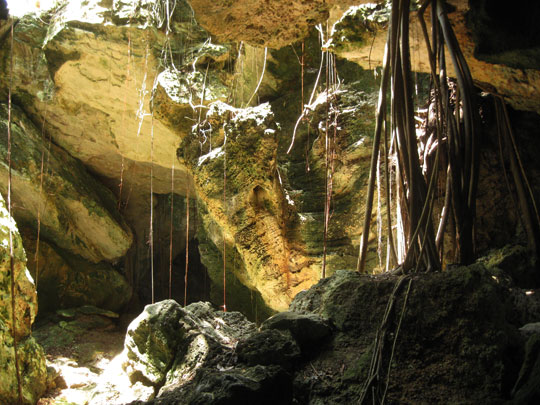 That evening Greg donned his guayabera, I put on my most festive skirt and we headed over to Quest with freshly made bean dip and a $6 bag of Tostitos purchased from Dingles. Dean, Kris and Derrick were already there when we arrived. We spent the evening dining on homemade guacamole, bean dip, salsa and freshly grilled quesadillas. The conversation was mostly about boats and sailing. We heard some good stories and picked up a few tips.

Meeting other sailors is something Greg and I really look forward to on this adventure. I miss my friends back on land. The whole transient nature of this lifestyle makes it hard for me to believe I will ever create new bonds like the ones we left behind. Friendships can be instant, but often times they take time to develop and grow. I know my old friends will always be there for me, but I miss being able to walk out of my home anytime I want and know that I wonâ€™t be able to get far without seeing a familiar face or a good friend and experience that special Cabbagetown neighbor lag.