Posted by Duwan Posted on June 14, 2012 0 Comments on Weathering Storms, Anchoring, Exploring, and Meeting People in Abaco
Posted in Life on the Water, The Abacos, The Bahamas

Since our guests left our life has slowed back down a little. We have spent a lot of time just lulling around in anchorages writing. The list of things we have to fix right away has grown and subsequently shrunk to become apart of the list of things to repair permanently and get a back up for once we return to the States. We have also done some exploring, checked out new anchorages, weathered some interesting storms and have met some more sailors.

As soon as Debbie and Karen left the bad weather descended down upon us. Not only did we see lots of rain, we also witnessed some pretty bad storms.

Anchored out at Cistern Cay we saw a water spout drop down from the sky into the water. In the photo you can kind of see all the water being whipped up. Although we were about a mile away from it, it was frightening to think that one of these could come out of the sky at anytime, anyplace, including on top of Blue Wing.

One evening while we were anchored in Marsh Harbor a strong storm decided to blow in. I donâ€™t think the picture really does the waves justice, but they were pretty nasty. The next day we heard that the wind was clocked at 41 miles per hour in the harbor and at least one boat was struck by lightning in the area.

Anchorages are usually marked on charts with a small anchor symbol. These are recommended places to drop the hook, but in reality you can toss out the anchor anywhere. Recently, for various reasons, we have been anchoring Blue Wing in some of these non-recommended â€œnon-anchorages.â€

After Debbie and Karen left we sailed to an anchorage marked on the chart west of Water Cay. It was nice to be on the hook again and the anchorage was great, even through the storm that night. The next afternoon it became rolly and uncomfortable. Still recovering from our week of fun and not ready to make a big move we motored over to the east side of Water Cay to a â€œnon-anchorage.â€ We got caught in shallow water a few times looking for a good spot to stop, but finally found one and spent a relaxing rest of the day.

After a quick trip back to Marsh Harbor for some provisioning, we ended up at another â€œnon-anchorageâ€ west of Cistern Cay. We were looking for good protection from the west and were interested in exploring a shipwreck on the shore. The bottom was rocky and we dragged several times before planting it in one of the few dark grassy patches in the water.

We were soon back in Marsh Harbour for some boat repairs. Marsh Harbor is usually a bit shallow for our draft and we tend to stay at the very back of the pack, but it was high tide and we thought we would explore the harbor a little and try to find the deep spot marked on the chart. We found it close to the dinghy dock and set the anchor. It was bordered by some very shallow water to the south, but the wind was blowing us north, so we thought we would be good for a one-night stay. Then it stormed (see picture above). The wind clocked around 180 degrees. We felt Blue Wing tilting on her keel and the uncomfortable feeling of not moving at all. We were aground. But the storm picked up and large waves moved through the harbor, lifting Blue Wing up and ungrounding her. We will stick to our usual spots at the back of the harbor from now on.

After Marsh Harbor we dropped the hook at one of new favorite anchoring spots off of Matt Loweâ€™s Cay. The next day the wind started squirreling around and the waves picked up. We motored to the other side of the Cay where we thought we would have better wind protection off of Sugar Loaf Cay. The wave were a little more settled, but we found out the next morning one of the reasons why this is a â€œnon-anchorage.â€ It is right off a powerboat highway. Every ten minutes we were rocking back in forth in the wake of some revved up fishing boat.

That morning we moved down to one of the recommended anchorage we had been to before off of Tilloo Cay. Paradise!

The charts and guidebooks provide so much good information. We found their anchorage recommendations to be pretty much on the mark, but if you stick to the same old beaten path, you are really missing some great exploring.

After we finally found some good holding off of Cistern Cay we dinghied ashore to check out the shipwreck. I took some pictures and we walked down the coastline. There is a nice grove of coconut trees here, which I will remember the next time I have the itch to go on a wild coconut forage.

Here are some pictures of what we found ashore: 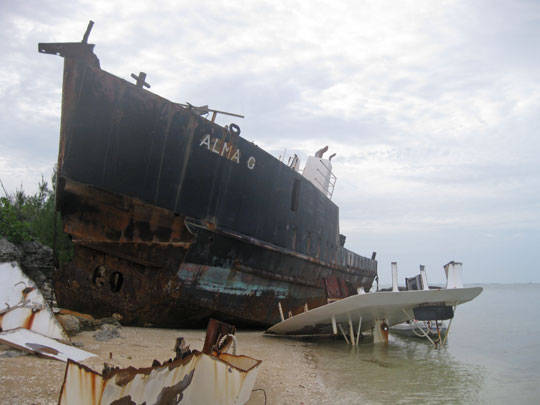 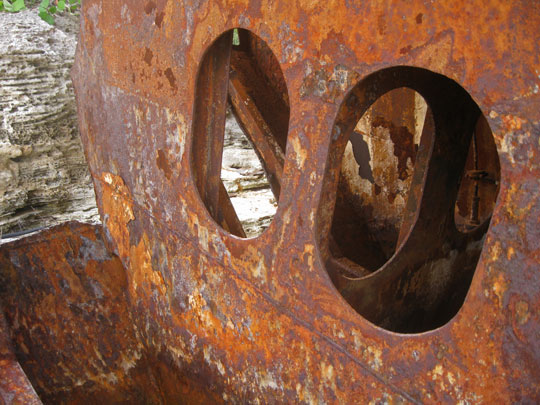 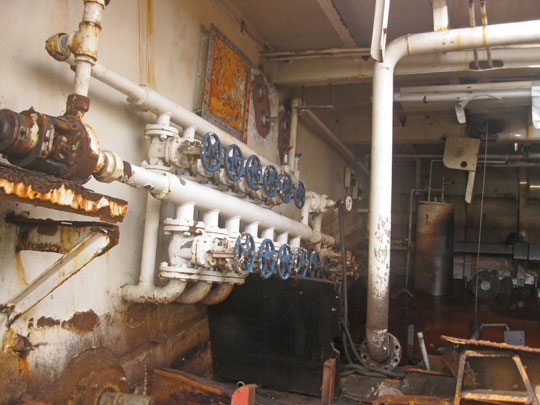 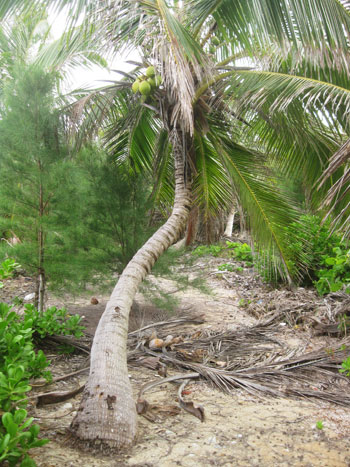 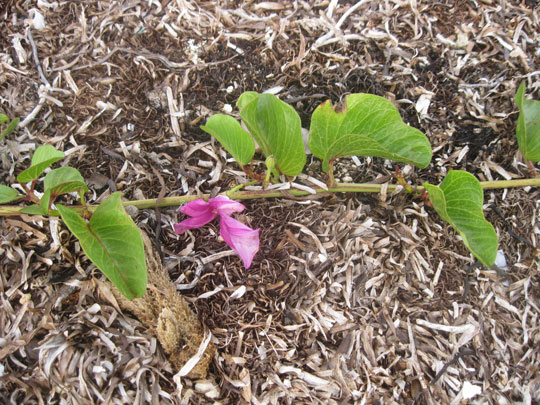 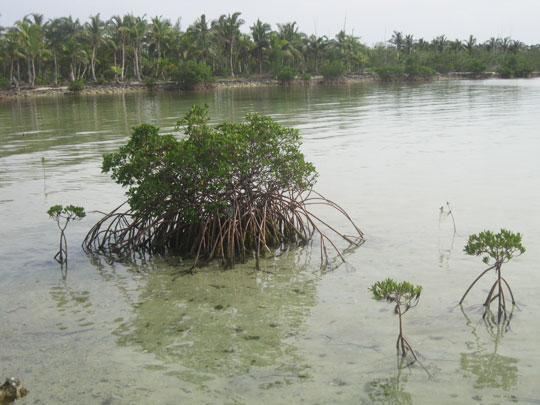 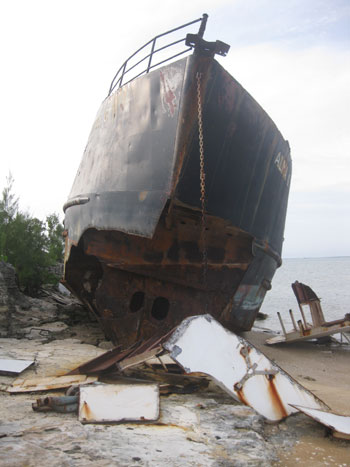 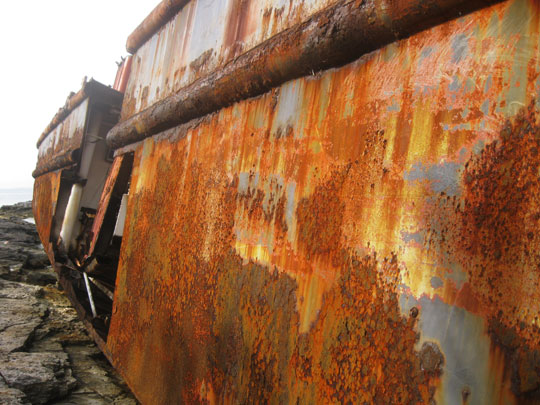 We finally met someone who knows where Cabbagetown is! While anchored at Matt Loweâ€™s Cay Rob paddled up to the boat in his inflatable kayak and asked, â€œIs that like the Cabbagetown near East Atlanta?â€ He invited us over to the boat he was crewing on, Meander, for happy hour. Meander is a catamaran owned and single handed by Charles. Rob and Charles have been sailing together since they were in college together studying engineering at Georgia Tech. Rob lives with his wife in Silva, North Carolina. Rob said his wife produced community theater and was always looking for new scripts from up and coming play writes. I told him that I had a playwriting niece and gave him her name so his wife could check out her work. We had a couple of drinks with them and tried to not out stay our welcome.

You never know whom youâ€™ll meet out here in the world. It is amazing how even the seemly dullest days can turn out to be an adventure and how random connections can be made.