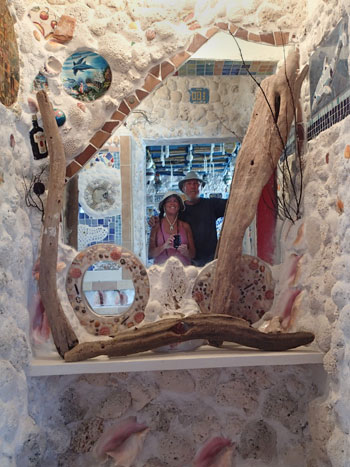 Duwan and Greg at the Dolphin House.

Bimini was our very first stop in the Bahamas at the beginning of our sailing journey little over two years ago. Our impression of the island was a little sad. Things seemed half done or falling apart, people seemed to be disappearing without notice. It was as if the island was eroding, holding very thinly onto a colorful and active past that was sloughing off itâ€™s shores like a giant rusty ship gone aground on the beach so many decades before.

But the truth is we never actually spent a lot of time in Bimini. Bimini has always just been a place to check into, a quick stop over until our real journey starts. At the beginning of our cruise we tend to hold on tight to our monthly allowance, hoping to save as much as we spend. This time, though, we were at the end of our season, we were â€œstuckâ€ in Bimini until we had appropriate weather to cross back to the United States, and we had saved as much as we had spent, so we felt comfortable letting a little more of that money go. And, unlike our first visit to the island, some parts of Bimini seemed to be looking up.

The channel into the harbor has been dredged and is now clearly marked. Brownâ€™s marina had been updated and spruced up. The restaurant next to the marina, which was under construction two years ago, was now open for business.

On our sail in we noticed the north side of the island seemed to have many more houses and structures than it had only 5 months ago. We could see 6 or 7 cranes. Homes, a resort, a casino are going up. But they are all on the north side, far from town in gated communities. A new dock is being built out into the ocean for the high-speed ferry that brings passengers from Miami straight to this â€œvacation paradise,â€ bypassing the very heart and soul of Bimini, Alice Town. We heard from a local business owner that the town had lost many hotel rooms with all the tourism going north. He told us that he understands the inevitability of change, but lamented that the town is not seeing the benefit from it.

Bimini appears to be in transition, but one thing that remains consistent almost all over the Bahamas is its citizens. Forget the crystal clear water and the bright sunny days. Forget the unspoiled landscapes and the colorful sea life. Forget the dazzling sunsets and the fresh salt air. Forget the glitzy resorts and casinos (if you really must think of them at all). The real jewel of the Bahamas is itâ€™s amazingly friendly, gracious, resilient, and resourceful people.

My impression of Bimini has taken a complete turn around. Bimini is a worthy stop of any adventurer. One just needs to get out of the marina, walk around a little, play a little pool or dominoes with the locals, hoist a cold one, eat some mac and cheese, and soak up the history and culture of our closest Bahamian neighbors. 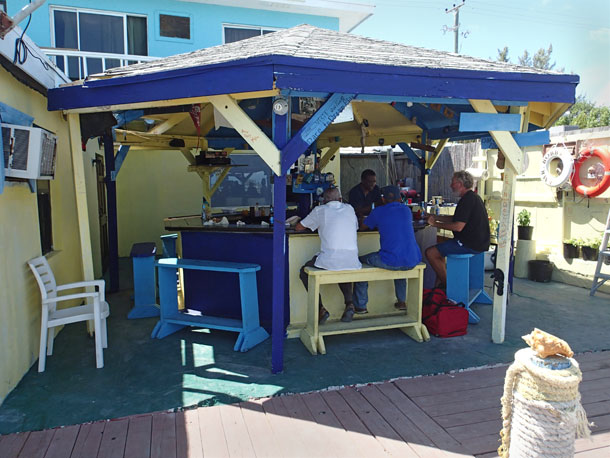 Our first stop out and about in Bimini was this disco near the marina. We passed through the dance hall to find this tiki bar out back. Aaron, the proprietor, served us up ice cold Kaliks and complimentary conch fritters. Unfortunately this was the only time we found the place open. But we did run into Aaron a few times after that at the bar next door. 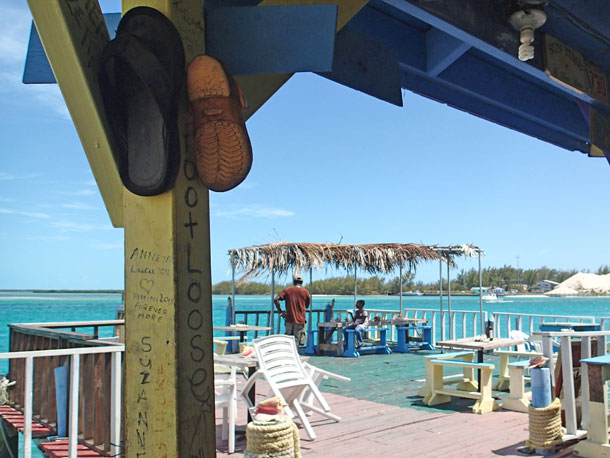 View off the porch at the Disco. 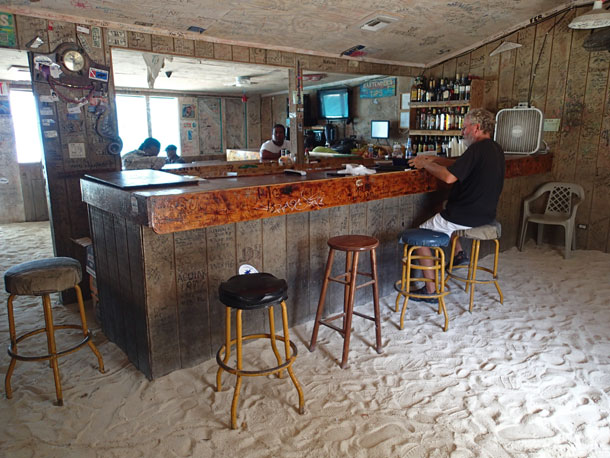 When we found the disco closed we decided to try the End of the World Sand Bar. Here we met Captain Dwayne and some of his crew, tug boat contractors from the States helping to built the dock for the high speed ferry on the north side of the island. Captain Dwayne gave us some of the low down on all of the constructions as well as making us aware of all the places we needed to visit before we left. Unfortunately we didn’t have time to hit them all.
I also met a couple of Bahamian men playing dominoes at the EWSB. When I asked if I could watch them play, they misunderstood and thought I was asking to play. I thought about it and said sure, lets play! 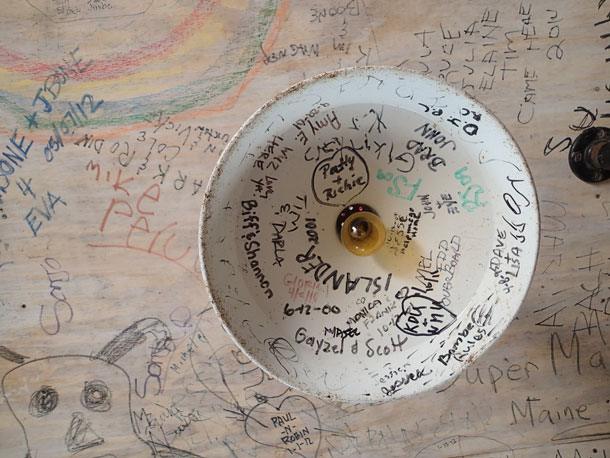 Every surface in the End of the World Sand Bar is covered with graffiti. 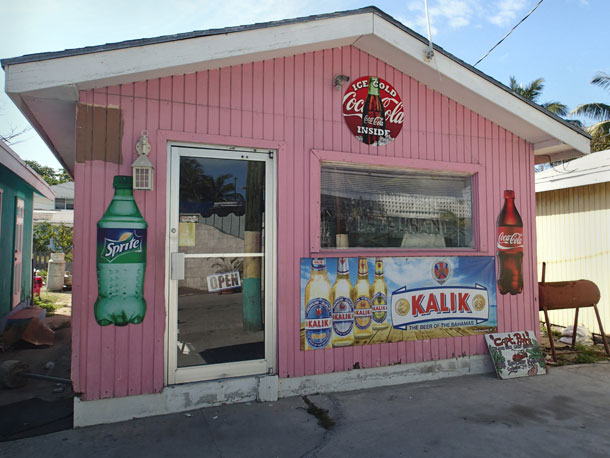 We stopped into Captain Pat’s for a bite to eat after a long day of exploring with some cruising friends. Julian (the owner/manager?) told us how much he loves visiting Atlanta. Curiously he reminded me of a Guyanese friend of ours from Atlanta, so I asked him where he was from. He told us he was born in Nassau, his mother is a Bahamian of African and Scottish decent, but his father hailed from Guyana. 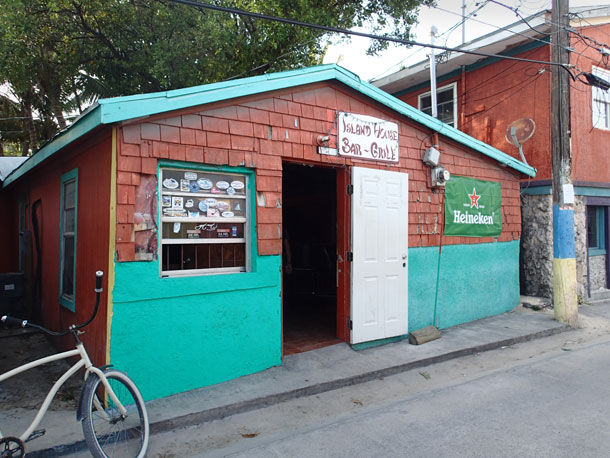 We went to the Island House Bar & Grill with our cruising friend Dave to play some pool. Dave, an avid pool player, spent Saturday evening here when the rest of us were watching Junkanoo. He said the place was packed. It was a little quieter the afternoon we spent there. We got to meet the owner, Tunes, and Dave played a few rounds with the bartender, Dylan. 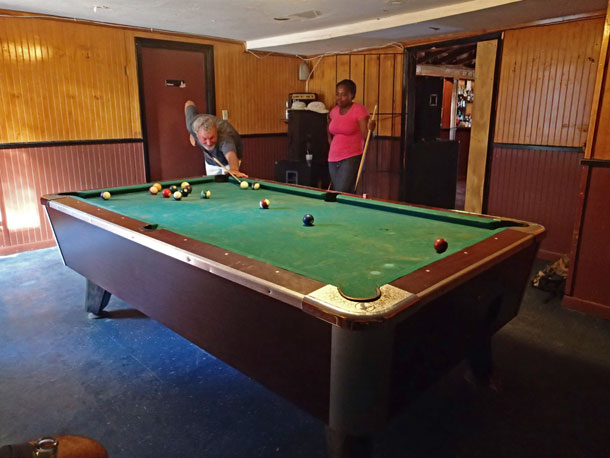 After Dylan had lost too many rounds of pool (or maybe he just had bar duties to attend to) he brought Keisha over to take his place. Dave took a break and Greg played a few rounds.
Note: This is a quarter table. When racking the balls, be sure and inspect them. Sometime there are more solids than stripes. 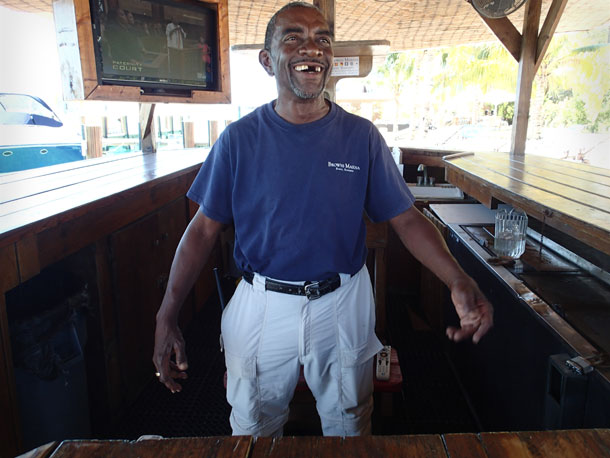 Humphrey! Humphrey, our go to guy at the marina. He is locally famous for taking the picture of Gary Hart and his mistress Donna Rice when they visited Bimini on the yacht “Risky Business”. The photo ended Gary Hart’s presidential bid. 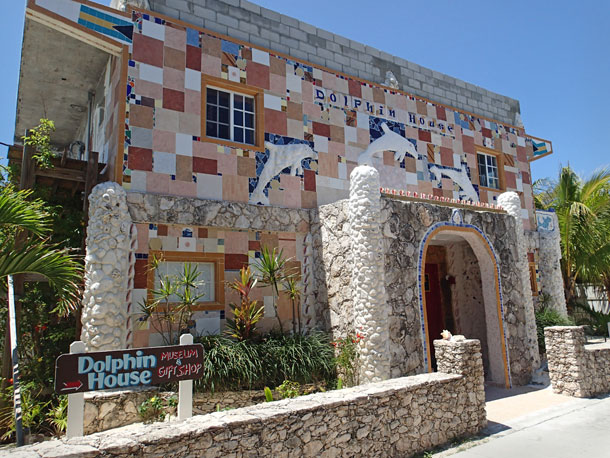 My absolute favorite thing about Bimini, the Dolphin House. This ongoing project since 1993, is covered with recycled tile and flotsam from the shores of Bimini. It is the inspiration and passion of island historian and author Ashley Saunders. 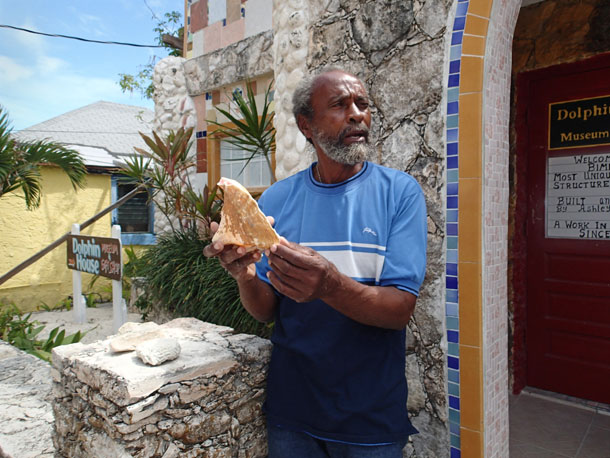 Ashley Saunders, descendant of a Scottish pirate is one of three artisan brothers on the island. Ansil is a boat builder and Thomas creates items from coconuts. Unfortunately we didn’t have time to seek out either of the brothers, but our sailing friends from the marina did and were impressed by their vitality (Ansil is 82 and just married), wowed by their craftsmanship, and regaled with stories about the island. Here, Ashley tells us about the conch shells imbedded in the structure. 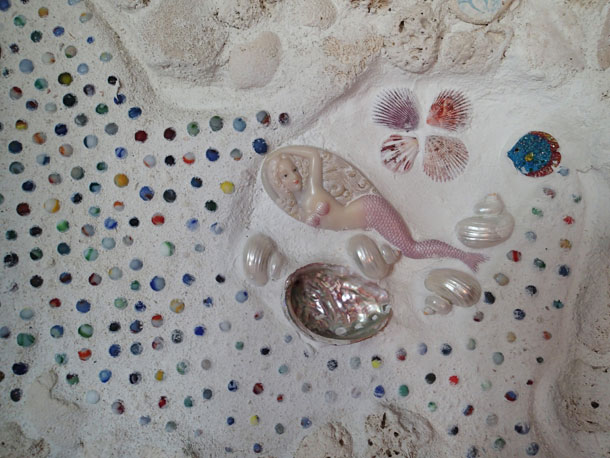 Detail from the mermaid room. 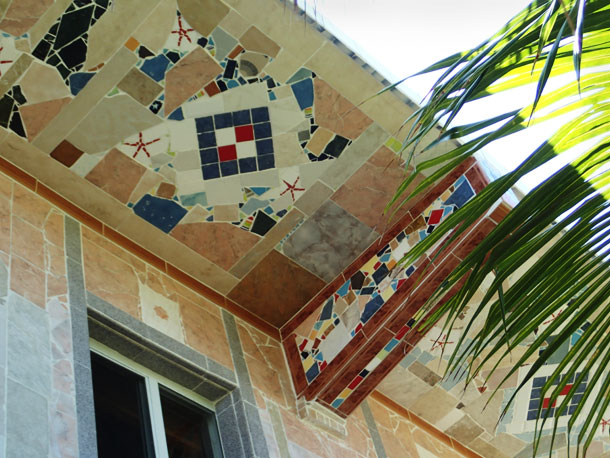 Every surface is almost completely covered with tile, including the underside of the eaves. 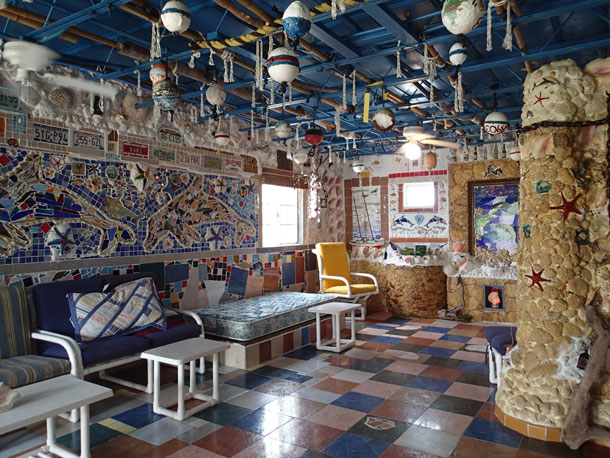 I asked Ashley if he ever rented the house out. He said no, that if he rented it out, he would not be able to give tours to people like us. 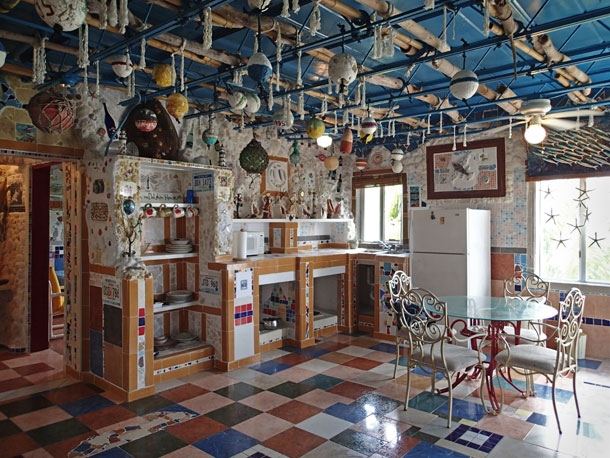 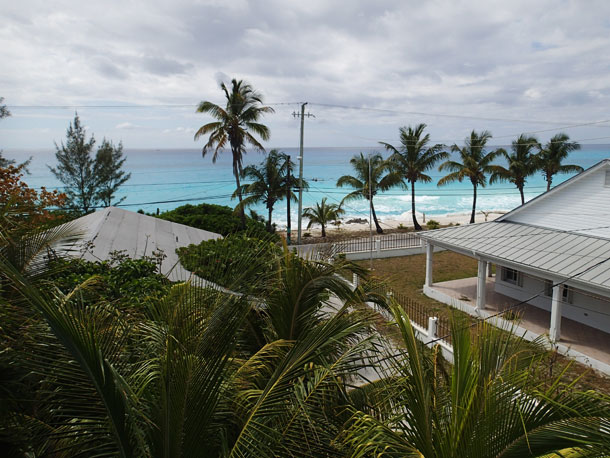 View from the top of the Dolphin house. Ashley says he can see the glow of lights from Florida at night. 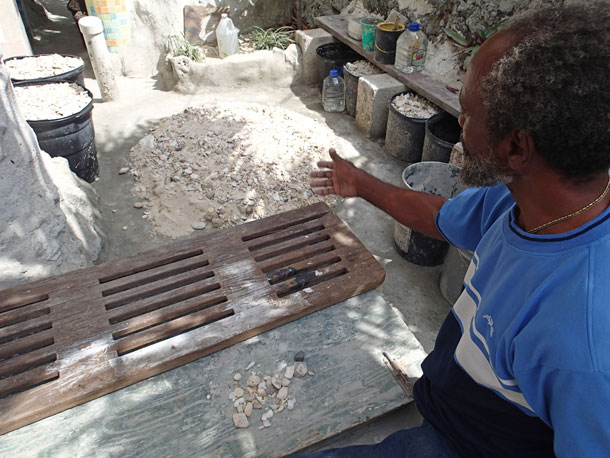 Ashley points at a pile of aggregate he uses for his concrete mixtures. He says it’s more effective than your “store bought” concrete aggregate because of the irregular sizes and shapes of the pieces. Beside the pile are buckets of aggregate lugged up from the beach. 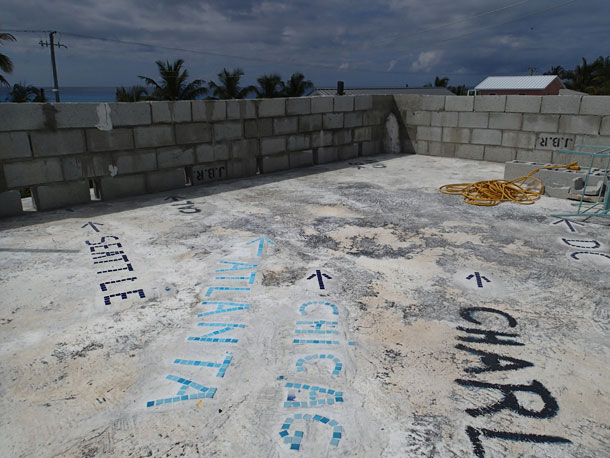 Rooftop of the dolphin house. Arrows point toward faraway cities. Ashley poured the roof one small section at a time over the metal frame. The concrete is eight inches thick. 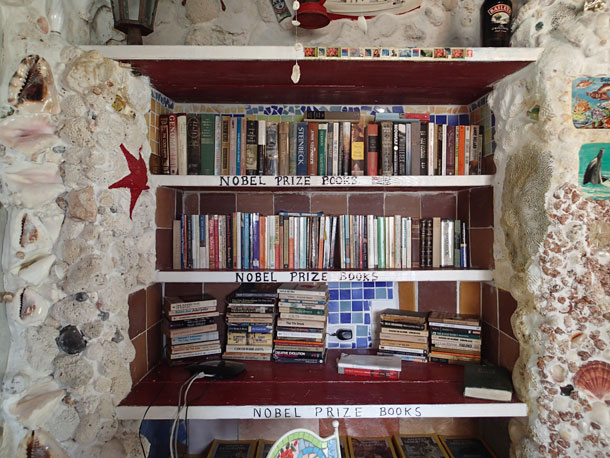 Inside the Dolphin House, shelves of Nobel Prize winning books. 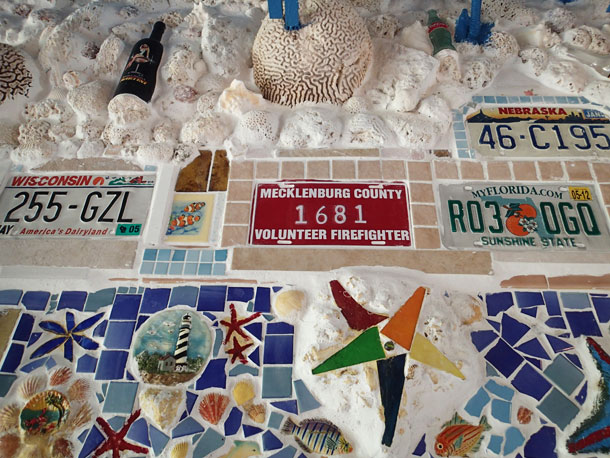 License plate in one of the walls inside the Dolphin House.