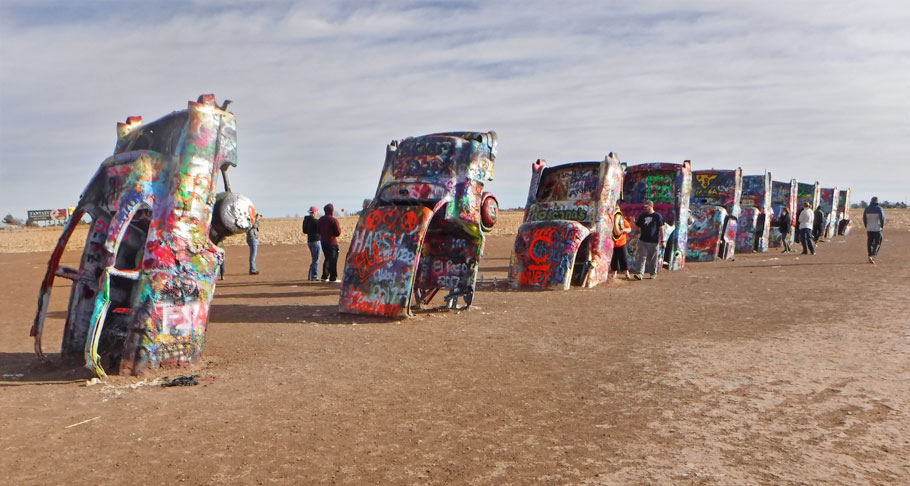 The Cadillac Ranch is an art installation created in 1974 by Chip Lord, Hudson Marquez, and Doug Michels. The 10 Cadillacs half buried in a field at an angle corresponding to that of the Great Pyramid of Giza in Egypt is meant to represent a number of evolutions of the car line including the rise and fall of tailfins.

Way back when, when I first graduated from college in St. Louis I used to work as a hostess in a restaurant with a piano bar. One of the songs I heard almost nightly that has forever permeated the jukebox of my mind went like this… “Get your kicks on route 66…” I hated it. But the crowd of middle aged drinkers sitting around the piano ate it up, no doubt remembering those family trips in the old family station wagon, back before Eisenhower and the interstate highways driving through –

– stopping at colorful hotels, pulling into the next town to fill her up, and buying knickknacks and mementos at kitschy gift shops.

Route 66, also known as the Will Rogers Highway, the Main Street of America or the Mother Road was one of the original highways within the U.S. Highway System, established on November 11, 1926. People doing business along the route saw their businesses prosper with a growing popularity of this cross-country vacation route. But, alas the interstate highway was built and the draw of the Mother Road declined. It is not quite what it was way back when. Most of the gas stations in these small towns have been repurposed as some other type of business, but some of the hotels are still there, as well as a few roadside attractions, and a gift shop or two.

Have you taken a trip on Route 66? What’s your favorite kitschy place to visit?

If you have never heard it, here is a link to a cool version of the Route 66 by Asleep at the Wheel. 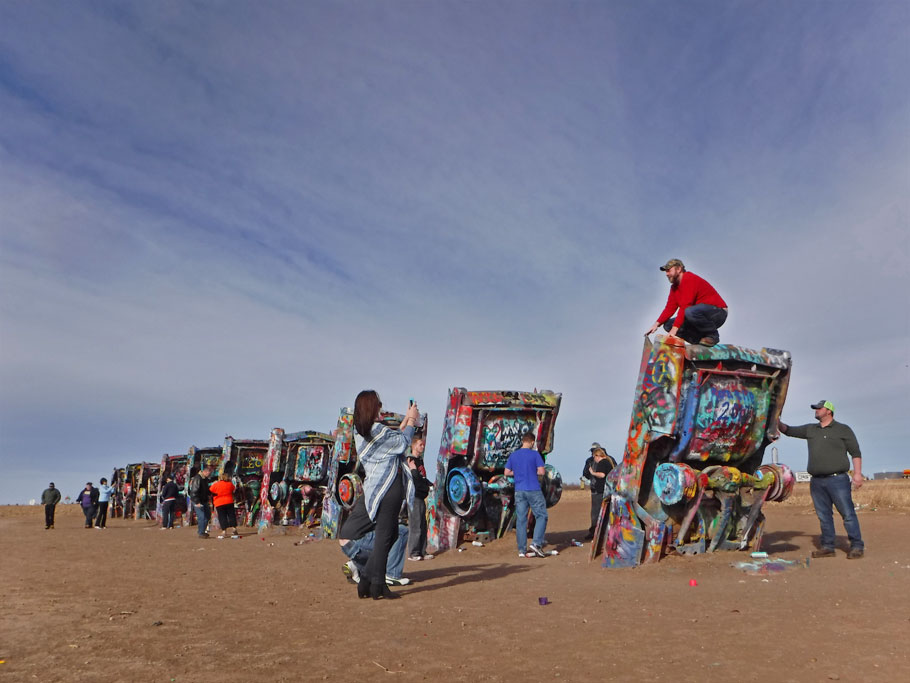 Although the installation is on private land, people are encouraged to come visit and paint the cars. Every once in a while the cars are professionally painted for various reasons – Flat black to mark the passing of contributing artist, Doug Michels, rainbow colors to commemorate gay pride day, pink to celebrate the birthday of the wife, Wendy, of the millionaire patron of the project, Stanley Marsh. 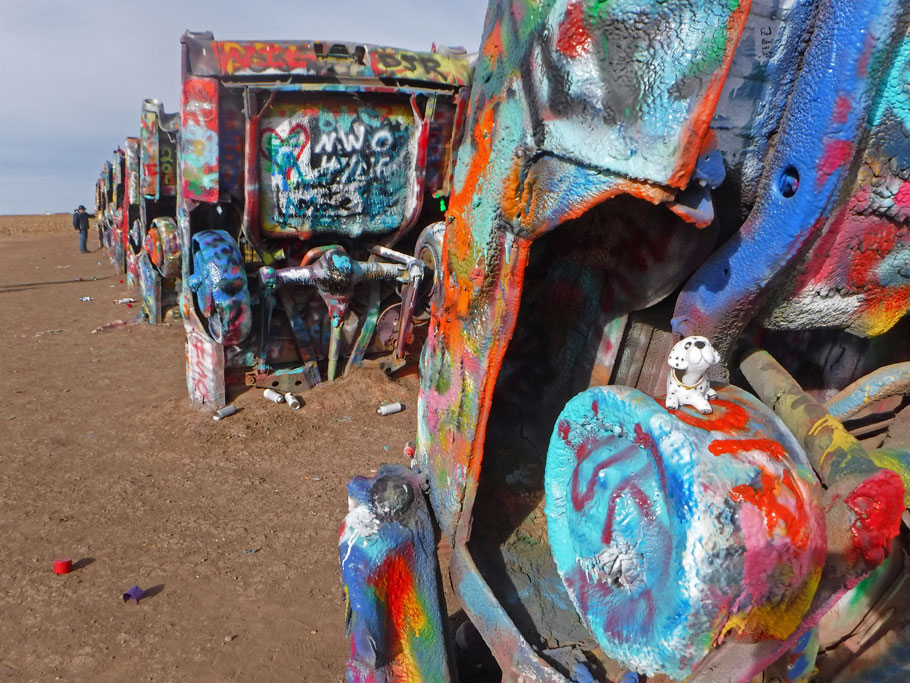 Bob doesn’t get out much, but being a lover of cars, he insisted on having his picture taken at the site. 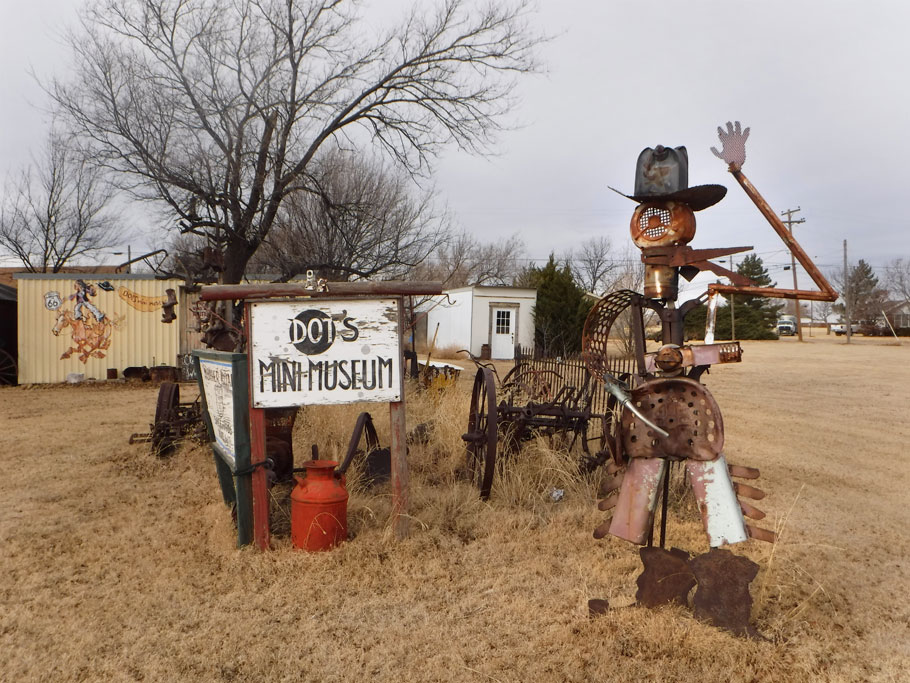 Our Route 66 travel day was Monday Jan 2, which was a federal holiday. Unfortunately a few of the sites we visited, like Dot’s Mini Museum were closed. 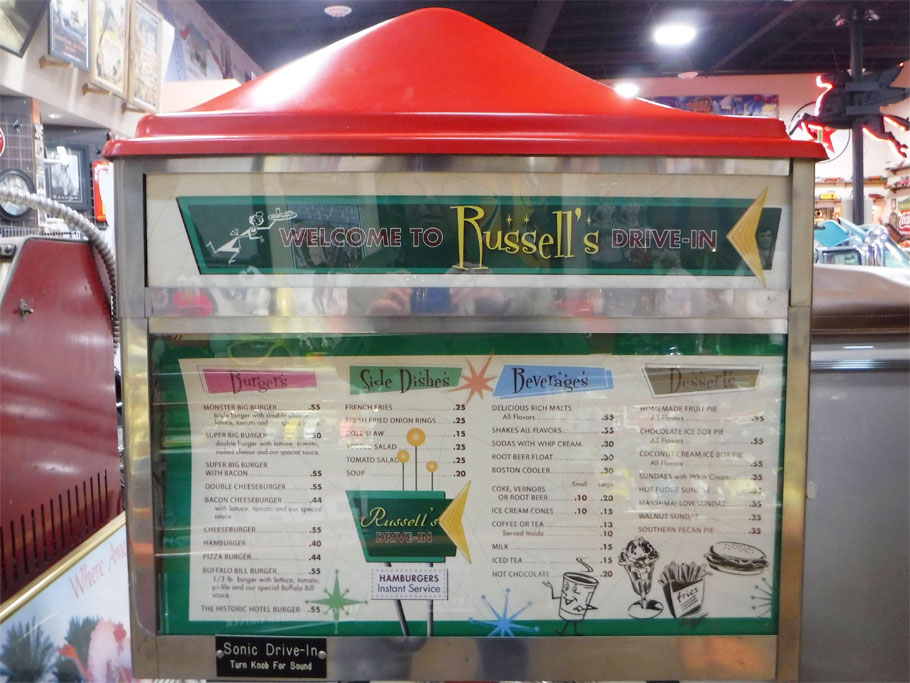 We stopped at Russell’s Truck and Travel Center to walk through their free Route 66 museum. 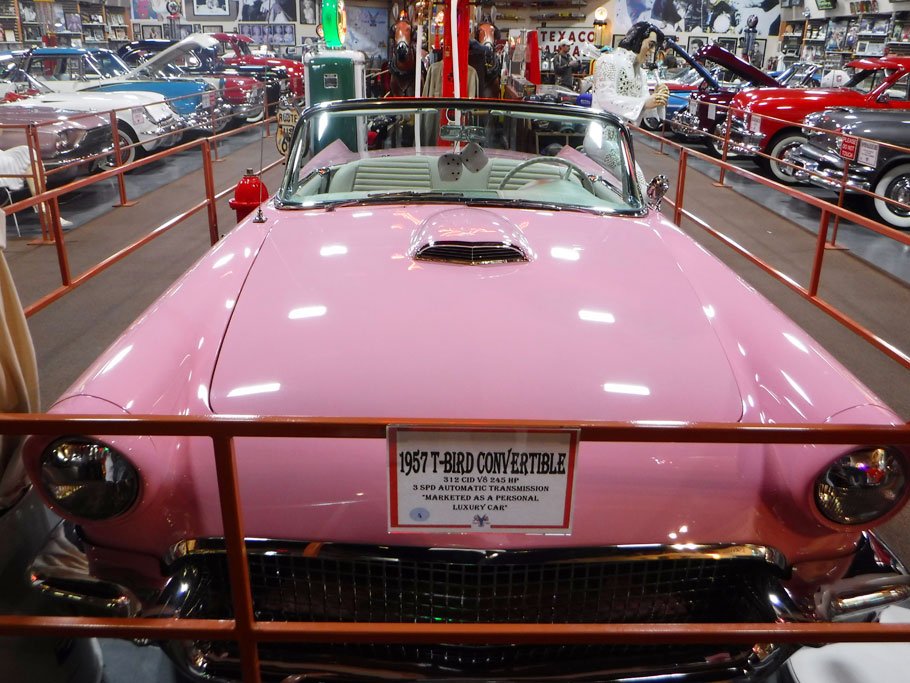 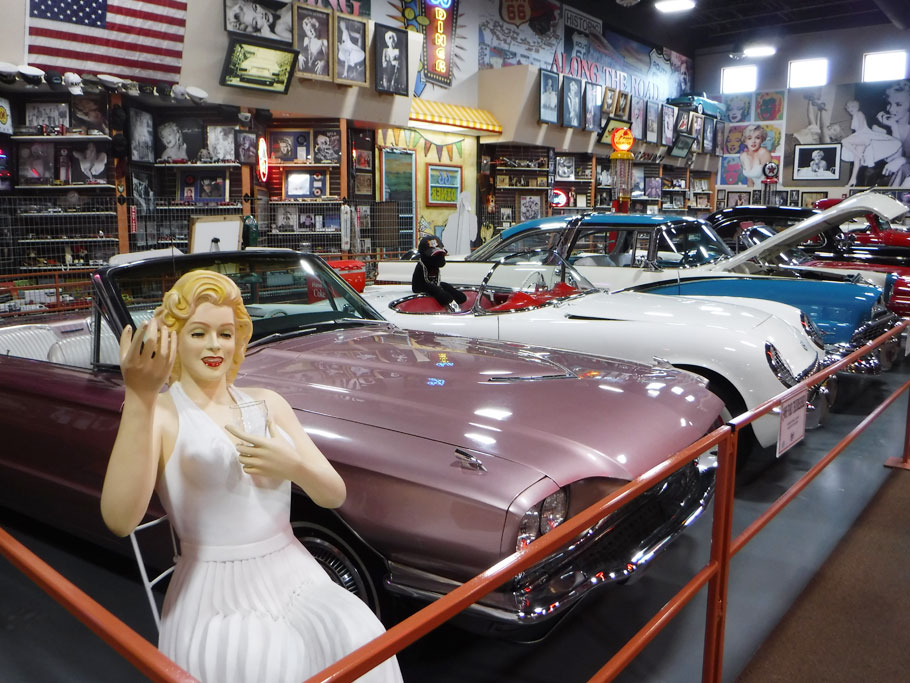 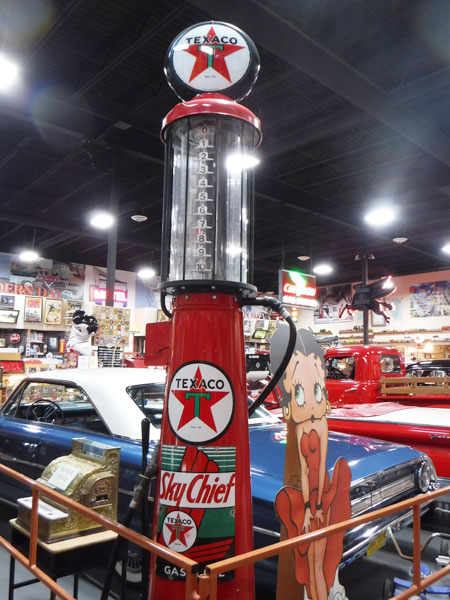 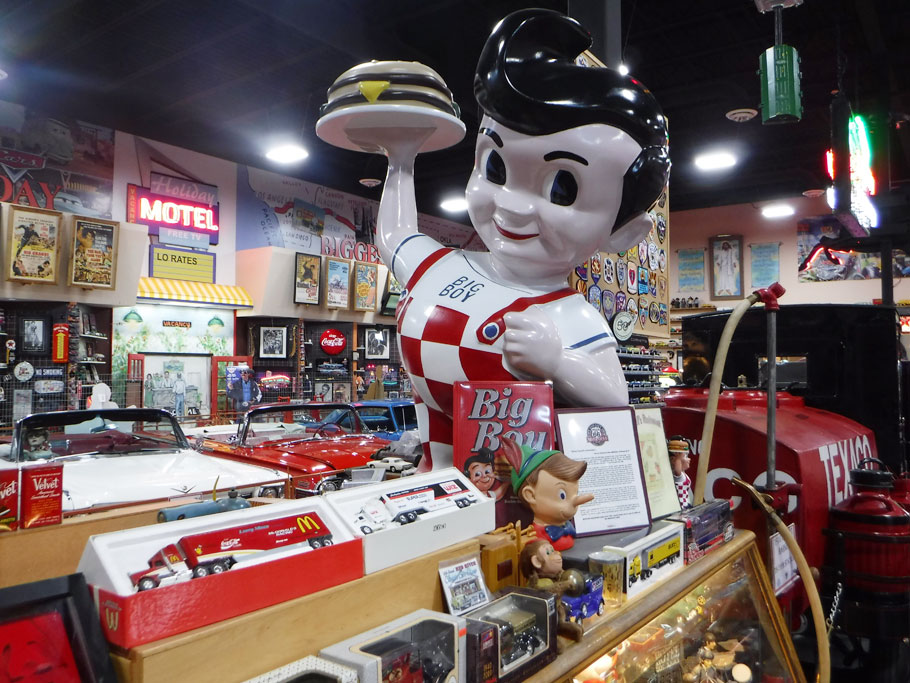 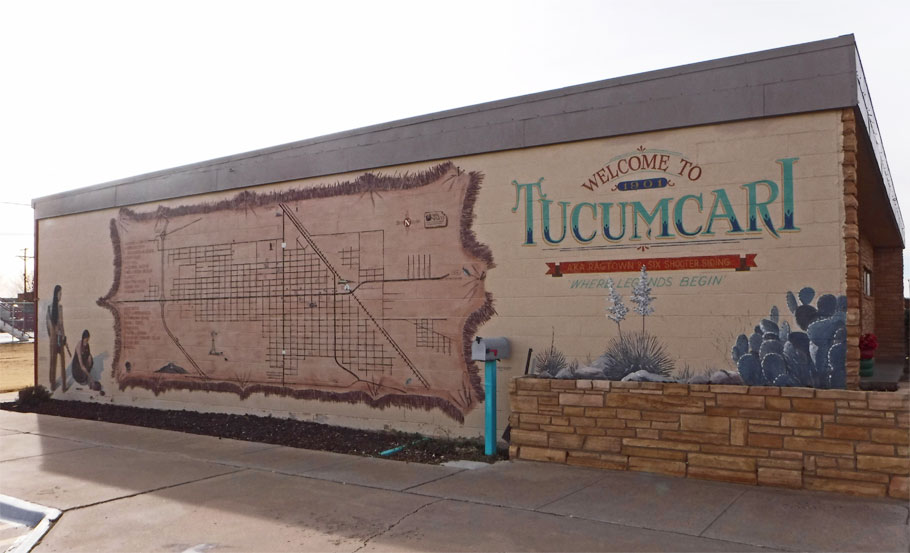 Tucumcari was the end of our Route 66 leg for this part of our trip. We will visit more of Route 66 as our travels continue. 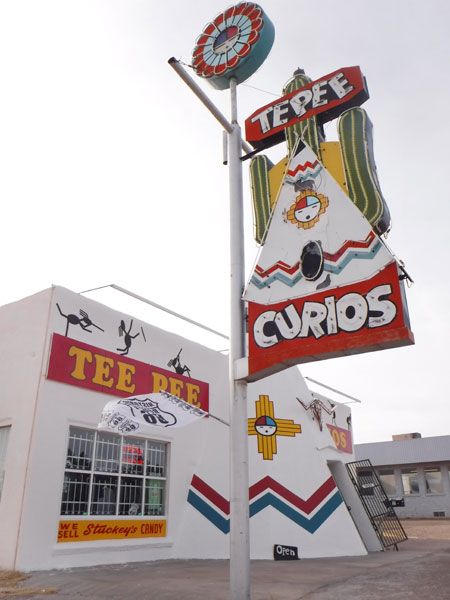 Our first stop in Tucumcari was Teepee Curios. 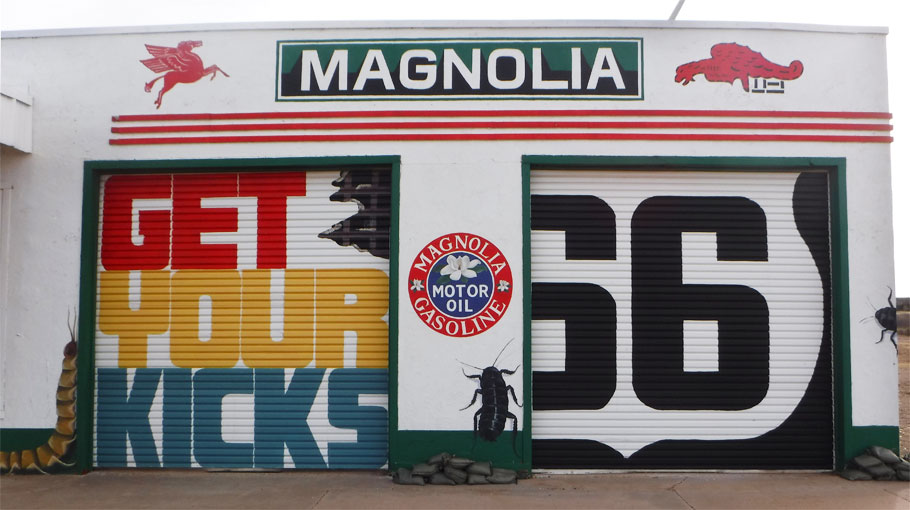 There are murals all over Tucumcari. We had a fun time driving around capturing them. 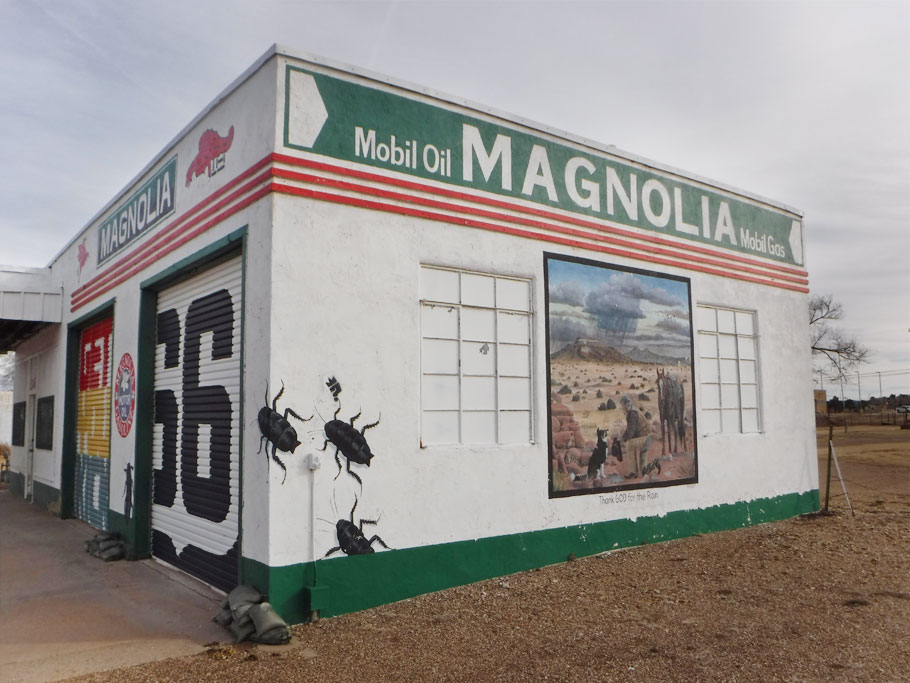 Some of the old gas stations have been turned into new businesses like this exterminator. 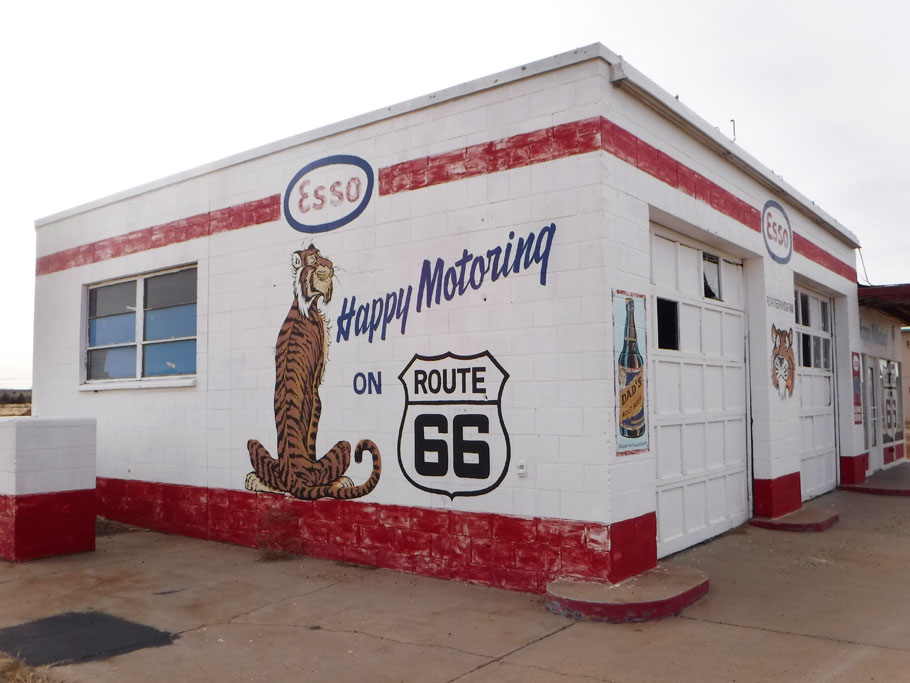 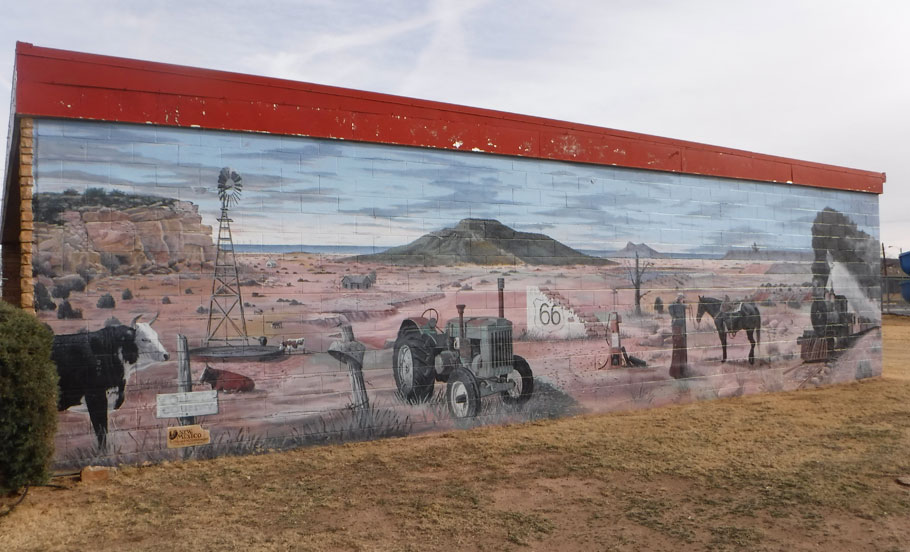 A little mural of Tucumcari history. In 1901, the Chicago, Rock Island and Pacific Railroad built a construction camp in Tucumcari. Originally called Ragtown, the camp became known as Six Shooter Siding, due to numerous gunfights. The town was called Douglas for a short time before it was renamed Tucumcari in 1908. The name was taken from Tucumcari Mountain which is most likely a Native American Comanche word. 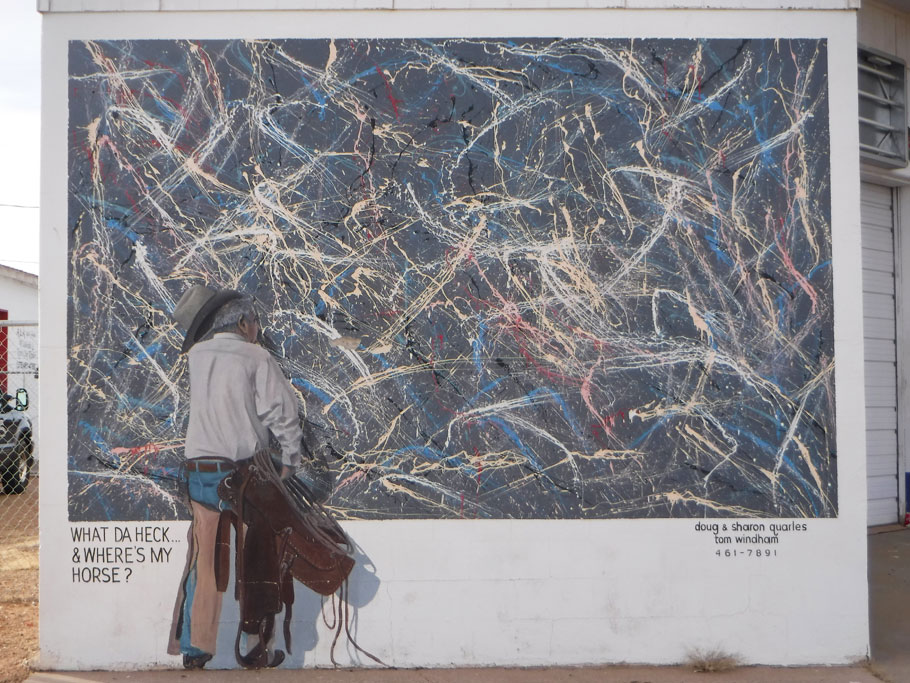 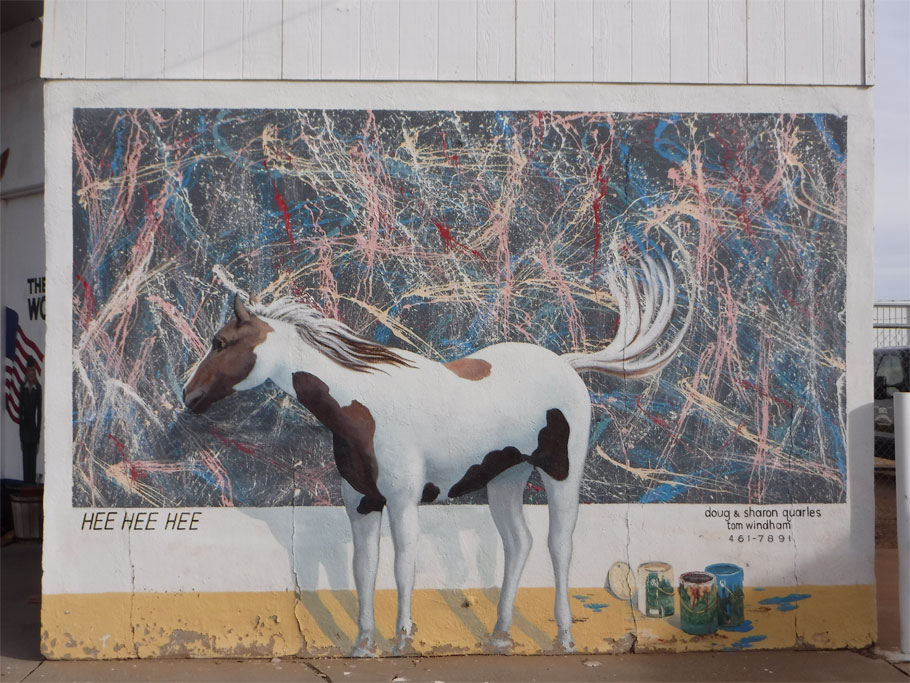 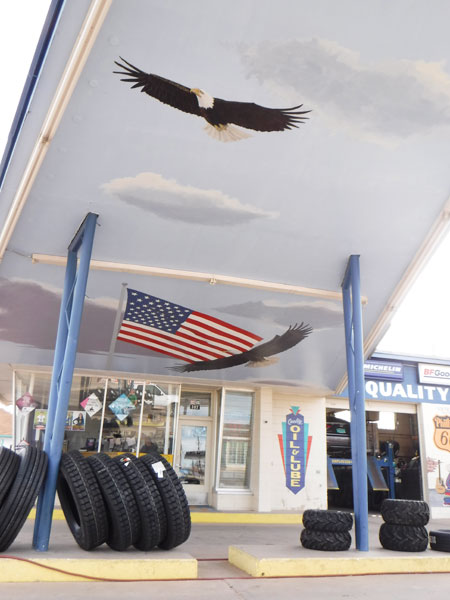 The owner of this gas station was especially proud of this eagle mural. 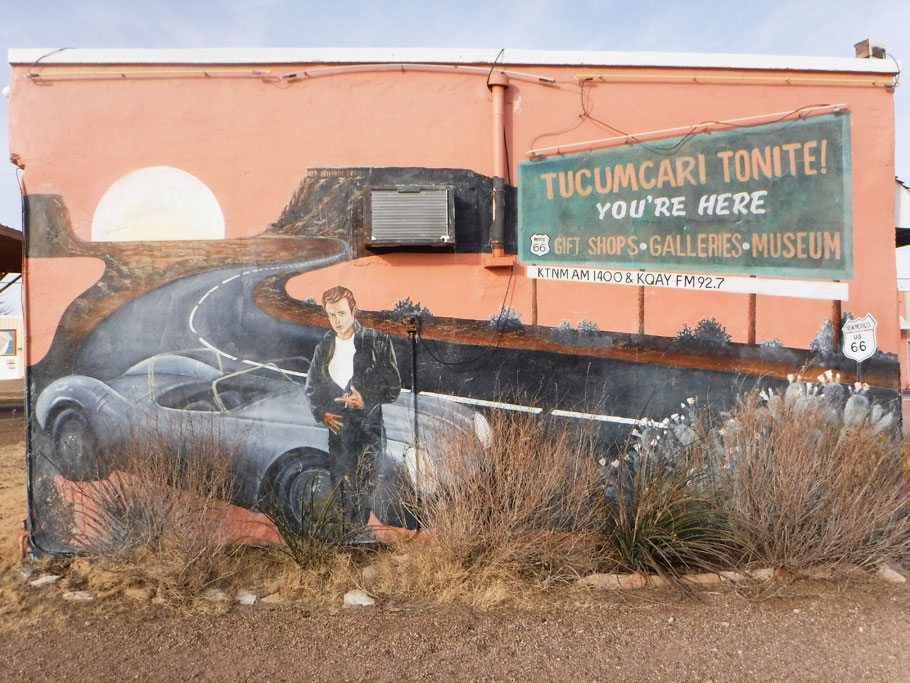 Tucumcari is the largest city between Amarillo, TX and Albuquerque, NM. Billboards used to line the highways inviting motorists to stay the night in one of the city’s 2000 rooms. 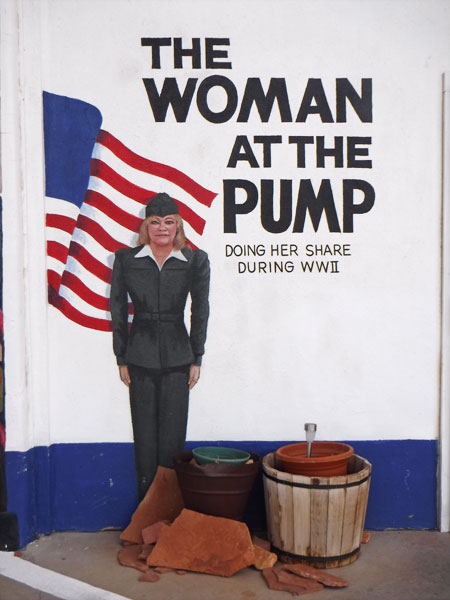 Honoring Women at the Pump.

A legend of the origination of the the name of the town goes like this … Apache Chief Wautonomah was dying and concerned who would succeed him as ruler of the tribe. He pitted his two finest braves, Tonopah and Tocom, against each other to succeed him and take the hand of his daughter, Kari, in marriage. Unfortunately the Chief did not know that Kari loved Tocom. The two braves met, with knives outstretched, in mortal combat. When Tonopah’s knife found the heart of Tocom, Kari rushed from her hiding place and used a knife to take Tonopah’s life as well as her own. When Chief Wautonomah heard of this tragic scene, heartbreak enveloped him and he buried his daughter’s knife deep into his own heart, crying out in agony, “Tocom-Kari”! 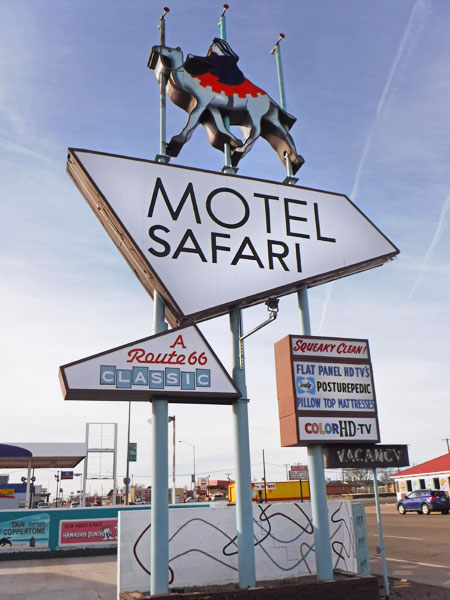 A few hotels still remain from the city’s heyday, like Motel Safari.

A view of Motel Safari. 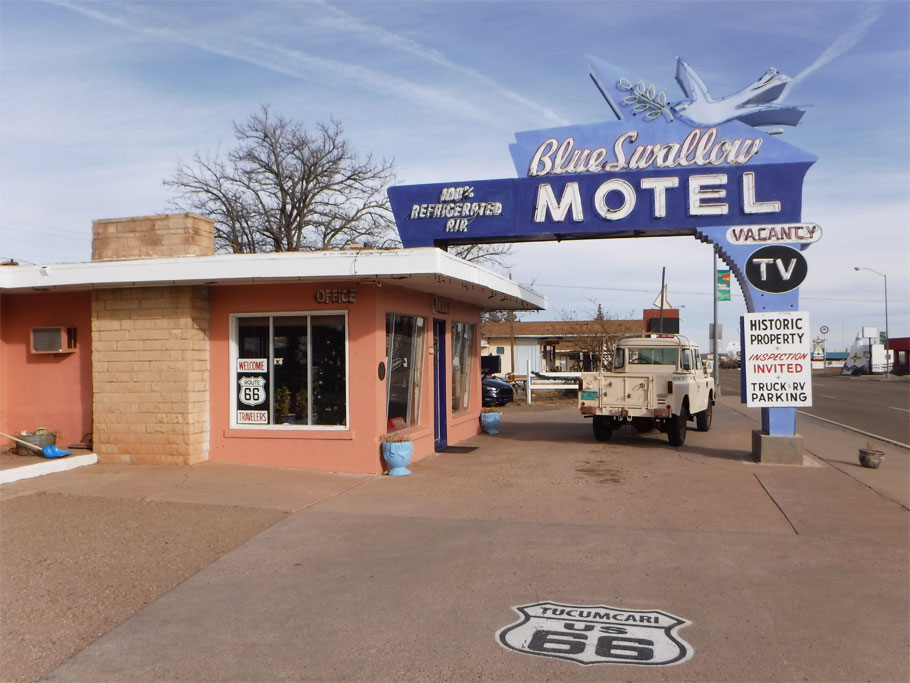 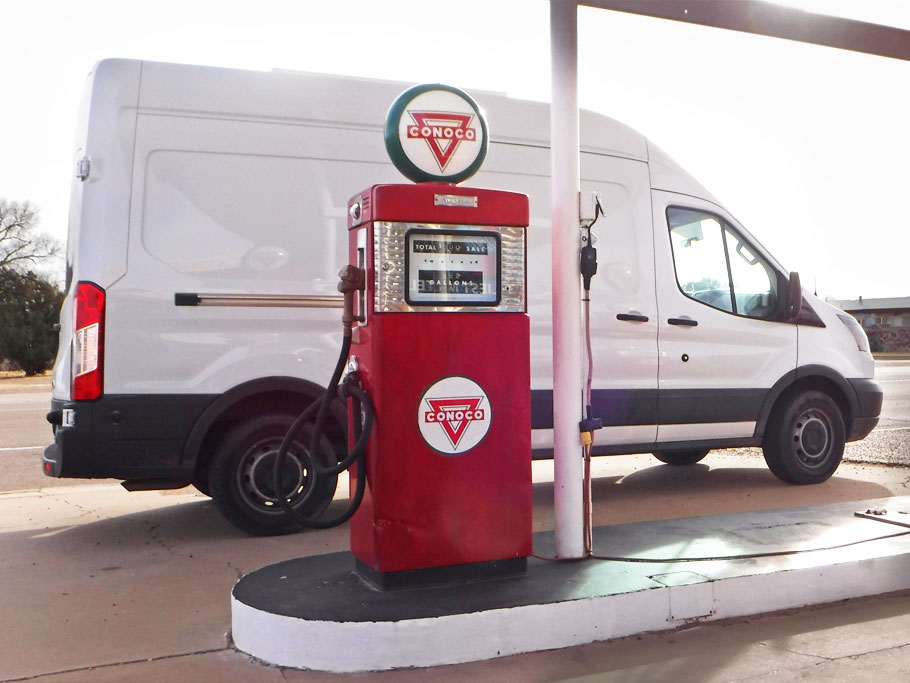