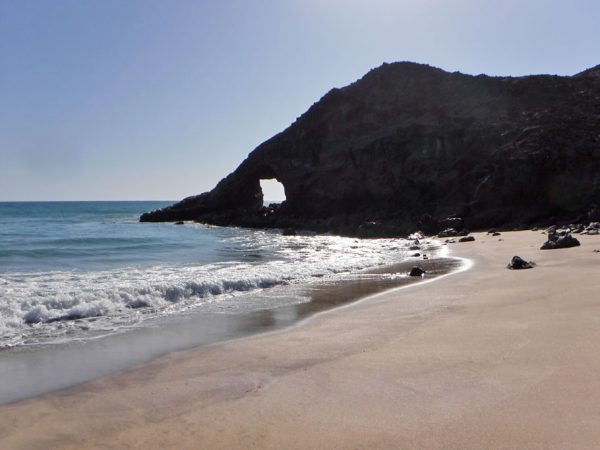 Sea Lion Arch at Morro Santo Domingo. This point, just below the town of Jesus Maria, juts out into the Pacific. We saw no California Sea Lions, though. We’ve read that sightings are more likely in the summer breeding season.

“Cebolla” said Duwan, holding up our fridge door, and pointing inside. “No. En Inglés”, said the guy with the machine gun. Duwan said, “Oh, Onion”. They moved around the van’s interior. He pointed at items, and she told him their names in English. “Bread, Sink, Potty.” We were at a military checkpoint. Turns out our inspector didn’t really care what was in the van. He just wanted to improve his English.

This was the case with many of the other Hispanics we met. One reason we wanted to come to Baja was to practice our Español. It’s much easier when you can feel confident leading with “Hola” instead of “Hello”. But we didn’t realize we’d see so many Mexican travelers. The places we chose to camp were also popular day stops for people on the road. We met many folks, and compared notes about where we had been and were going. Each party tried his best to use the other’s native tongue. Fun stuff!

More things we’ve learned on the road in Mexico

The best place to change money is through an ATM machine. When we arrived in Mexico we went to a Casa de Cambio (A money changing business). We got a rate of 17.35 pesos to one American dollar. It was the best posted rate we saw during our entire trip, so we thought we were doing pretty well until we couldn’t find a Casa de Cambio and had to use an ATM. Minus the small fee, one American dollar bought 18.59 pesos.

Although things are often priced in centavos, especially at the grocery store, no one uses them. If your bill comes to say, 860 pesos and 20 centavos, they will just round down to 860 pesos. Actually sometimes Mexicans don’t really care at all about small money (consider one peso is worth about 5 or 6 American cents) and will round down your whole bill from 1001.01 to 1000, just so they don’t have to break a 500 peso bill – which is a problem when you need the change to tip your bagger.

Always try to keep small bills and coins. Mexican money come in 10, 5, 2, and 1 peso coins. You will need these to tip your bagger at the grocery store or your gas station attendant if he or she washes your windshield (parabrisas). Also, depending on what you are spending your money on, don’t always expect people to have change. Hoard the coins and the 200, 100, 50, and 20 peso bills and spend the 500 bills when you can.

Early on we read about how gas station attendants like to scam people. We didn’t run into any of this. But, of course, it never hurts to be aware.

There are tons of these. We have been told they are looking for guns. Usually someone knows at least a little English, but it is good to understand what they are asking you in Spanish and have answers prepared. “De dónde viene?” – “Where did you come from?” “A donde va?” – “Where are you going?” The guys at these check points are pretty friendly, although they will laugh at you if they ask you, “De dónde viene?” and you tell them where you are going. They usually do a walk through the van and maybe open a few cabinets, but not much else. I suppose we seem pretty harmless.

Sometimes we stay at places with free wifi. It can be terribly frustrating when, although free, that wifi is slow. I was trying to upload at picture at this restaraunt and it was taking forever. Then we placed our order and I glaced back to the kitchen and saw the proprietors turn off the telenovela they were watching on Netflix. The pic posted. I now blame all slow wifi on streaming telenovelas.

I believe it is a good rule of thumb when camping in Baja to bring your own potty. This doesn’t hold true for every campground, but does for quite a few we visited. And if you do dare to use an outhouse, bring your own TP. If you are at a tourist attraction and someone is charging for the bathroom, it is probably worth it. Ten pesos is not a lot to pay for a clean, tidy baño with toilet paper.

You can’t find pretzels in Baja. But there are lots of Cheetos and Doritos. They are extra spicy, unlike regular Tostitos tortilla chips, which are kind of bland. We also couldn’t find any cheddar cheese. All the cheese is white and pretty much tastes the same.

Surprisingly, you can find hummus, but the tasty looking pita bread you buy to go with it might be moldy.

Right now, this very minute, we are still in the very nice library in La Quinta, California. Here is another picture of some of the awesome art at this library. Click the thumbnail to enlarge the pic. They also have a selection of free books. We just picked up a great sky guide!

By the time you read this, though, we hope to be long gone from the library and off on our new adventure which may involve, space, movies, history, and maybe really big trees.

Ballena Blanca has Fukushima Beach all to herself. 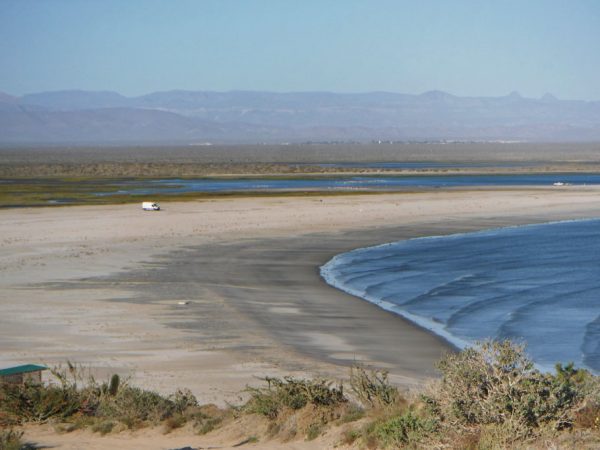 View from Morro Santo Domingo looking down on Fukushima Beach and lagoon. 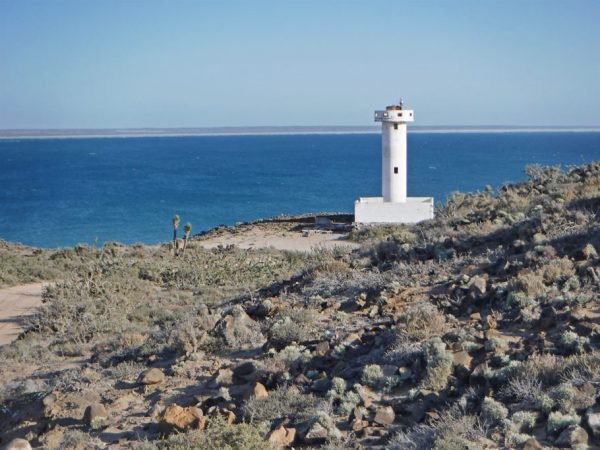 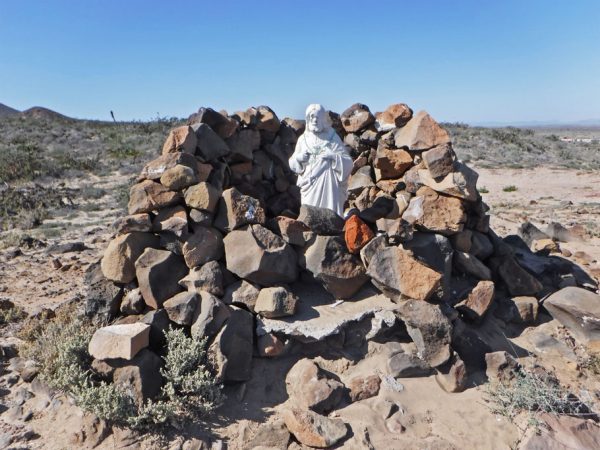 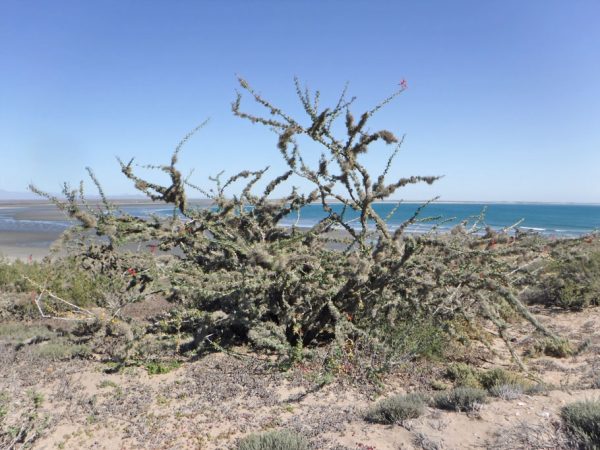 All the cactus up on the point is covered with some kind of airplant. 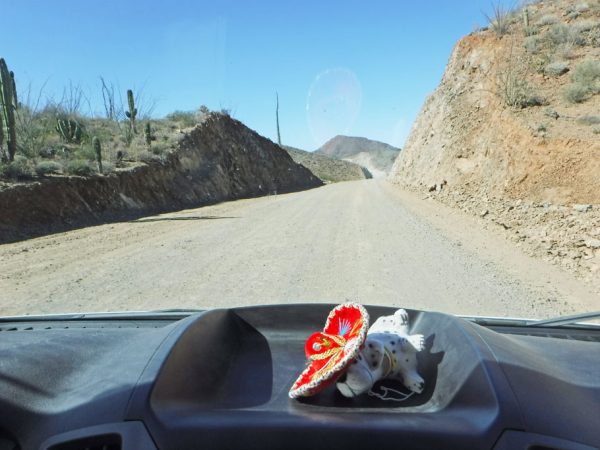 We’ve retraced our path up Mex1 and turned east on Mex5. The first 30 miles is unpaved. Bob, tired of jumping up each time he’s hurled to the side, decides to lie down until we get back to paved road. Further on we stop to help a couple from the Netherlands with their flat tire. 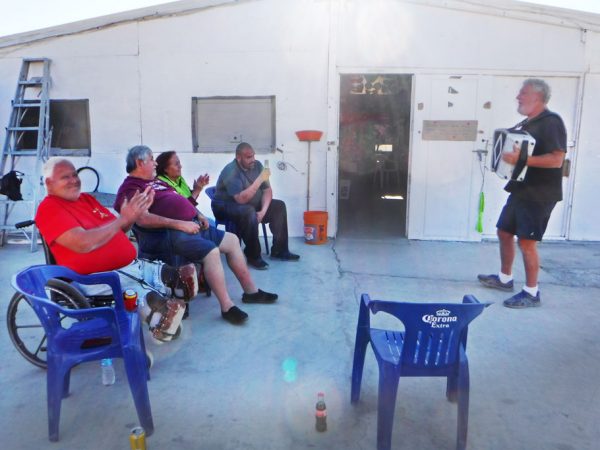 The only oasis in this unpaved stretch of Mex5 is Coco’s Corner. (Actually there is no real commerce until San Felipe, over 100 miles further still.) We settle in quickly. Coco (foreground) claps along to Greg’s “Pobrecito”. 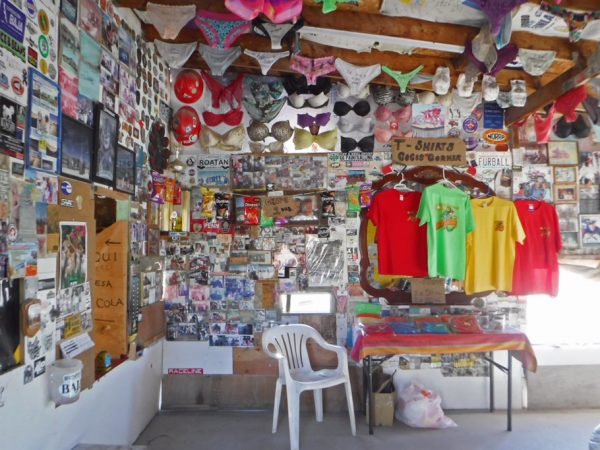 Interior at Coco’s Corner, where people have been leaving underwear and memorabilia for years. 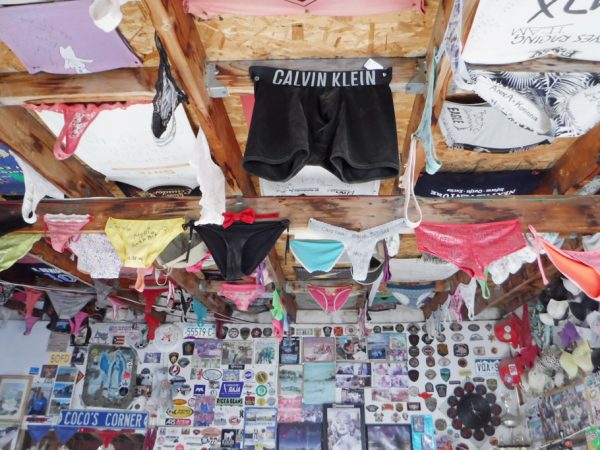 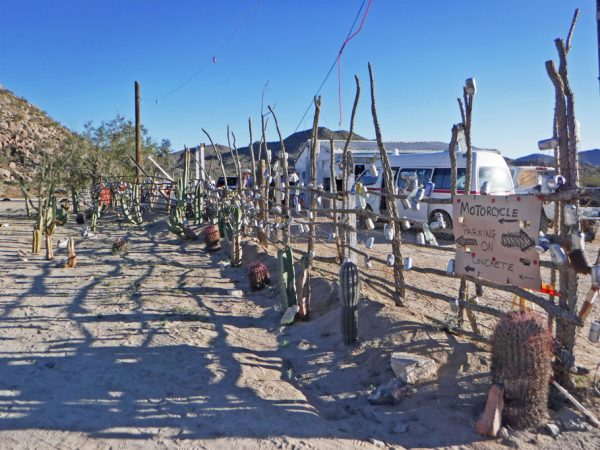 Outside at Coco’s cans tied to the fence make music when the breeze blows. 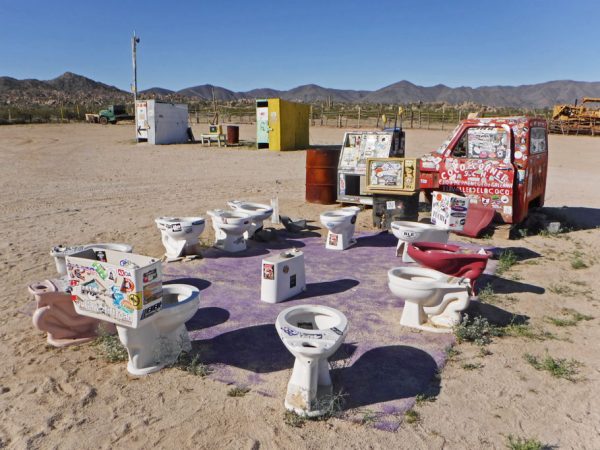 Yard art at Coco’s (baños in the background). 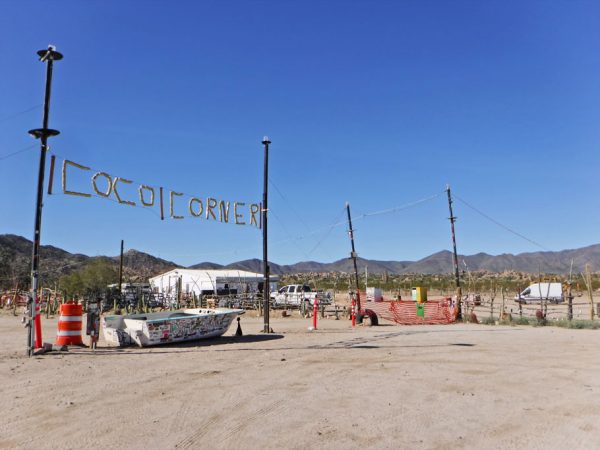 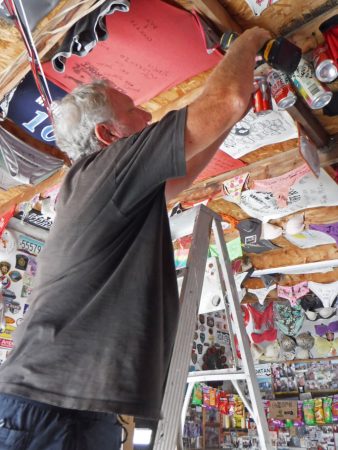 We leave a couple of autographed Tecate cans which we bought back in Rosalía. When Greg asked if there was more Tecate in back there was a lot of discussion (in rapid Español). The manager sent someone to fetch a few 12 packs. They had Cyrillic lettering and Russian domes on the labels. Were they really supposed to be sent to Moscow?

Mex5 hugs the northwest coast of the Sea of Cortez. The view looks much like this all the way to San Felipe.

We’ve passed through busy San Felipe, which I think of as Mexican Myrtle Beach. Mex5 leaves the Sea of Cortez behind and heads north through the hills. 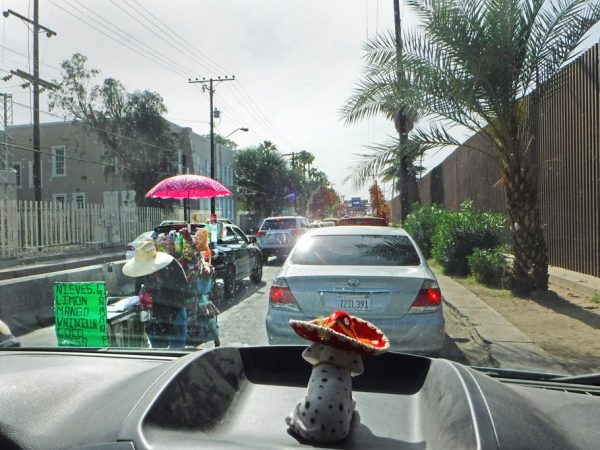 Waiting in line for about 90 minutes in the border town of Mexicali. (Calexico is on the other side.) Border wall is on our right. Duwan sees people talking to each other through the bars. The border guard confiscates our oranges, then we’re back in the USA.