Another 2 months of tracking expenses is finally done. This little project can be a bit daunting sometimes because, really, we spend way too much money. But it is great to see where the money goes and be able to talk about the money we spend on the van and the changing importance of where we spend some of our money.

All expenses are in US dollars.

Here are our totals for everything we spent for the past two months:

And here is the break down of those totals in spreadsheet form: 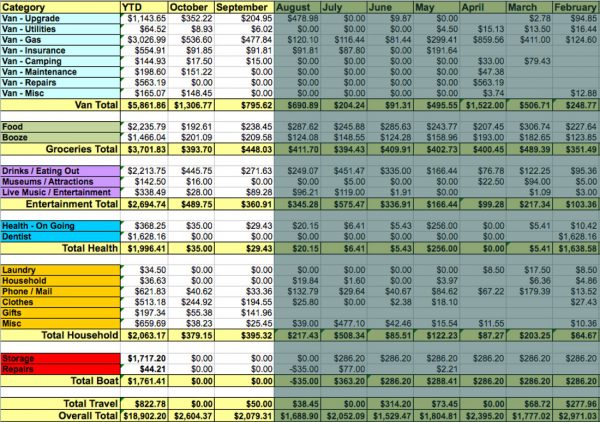 And here another break down of and a little discussion of just some of these expenditures:

These are all expenses relating to the van itself, living in the van, and traveling in the van. The totals for the two months are:

Ok – I am astonished. These numbers are half or nearly half of all of our expenses for September and October. What is up with that? Let’s break the numbers down and see…

After traveling in Ballena Blanca for two seasons we were ready for some upgrades and new gadgets to make our life in the van easier and more efficient. I spent a whole lot of time on Amazon shopping for the right items, checking the size of those items, and deciding if they would fit in the van and where they would go if they did.

Here are a few examples of some of the things we spent money on to upgrade the van:

This is when I really wish I had been tracking expenses when we owned the boat – because although our year-to-date total on van upgrades comes to the large number of $1143.65, I am pretty sure this is nothing compared to what we used to spend to upgrade and maintain Blue Wing each year.

We did a little traveling in September and hit the road again in October, so we bought a little water and a little propane.

In September we took a little break from house sitting and went on a little road trip up the east coast to visit family and friends and then over to Ohio for a van gathering. Then on October 11 we really hit the road again traveling first to North Carolina to spend some time with Greg’s parents and work on the van a bit – then off across the country, landing in Tucson, AZ on Halloween.

On our trip up the east coast in September we camped/boondocked 3 nights. Two free nights (One in a Walmart Parking lot and one in a National Forest) and one paid night ($15) in Shenandoah National Park.

In October we traveled over 2000 miles across the country. We headed out from Greg’s folks’ house on October 22 and arrived in Tucson, AZ on October 31. Here is our accommodations breakdown:

We took Ballena Blanca in for her scheduled oil change and tire rotation and had all of her systems checked out while we were there, $151.22. The other $148.45 was for two years of Florida registration.

We spent $238.45 on food in September and $192.61 on food in October. Perhaps the decrease in the October number was due to more eating out but honestly if you look at previous months with lots of eating out, there never seems to be a correlation to a decrease of our eating in numbers.

This category is for eating and drinking out, live music, museums, and attractions. Here are the breakdowns:

As I have mentioned in previous expense blogs eating and drinking out in Atlanta is expensive. There was a bit of going out with friends in our final weeks in Cabbagetown. We also did a lot of treating out in September and October with visits to Greg’s daughter, son-in-law, and grandson in September, to Greg’s son and daughter-in-law in October, and to my niece on our way out west.

Just some medicine cabinet type stuff and lots of shoe inserts. Ugh – we have bad feet!

Here are the totals for the two months:

And here are the breakdowns:

Our phone plan is with Google Fi. We pay a base fee of $20 for unlimited talk and text and $10 a gig for data up to 6 gigs after which data is free up to 15 gigs. Over the summers when we live in houses and have access to WiFi it works well to keep our phone bill low.

Moving permanently to land and traveling in the van has required us to do a bit of a change of wardrobe. On the boat our shoes were pretty simple – cheap flip-flops, a pair of hiking /wading sandals, and maybe a cheap pair of tennis shoes. But now in addition to the change from boat life to stomping around in deserts and climbing around in canyons, we have both developed plantar fasciitis. It was time we bought good shoes with support. And, wow, good shoes are expensive!

This is a brand new category! For all the years that we lived on the boat, I felt poor. It seemed like every summer we arrived back in Cabbagetown almost broke. We went from a life where we didn’t have to worry about spending lots of money finding the right Christmas gift for everyone in the family and treating all the younger family members when we went out to not spending a dime on any of them (except for the grandchild – we are not that stingy).

This summer we did well making money and I decided it was time to start spreading around our good fortune again. In September and October we visited most of our immediate family bringing them gifts of chocolate and pastries – ’cause after 7 years of not buying gifts, how can you go wrong with chocolate.

$50 registration for the van meetup in September.

* Click pics to enlarge and open into a slideshow.
** To see previous Cost of Being a Nomad blogs, click here.