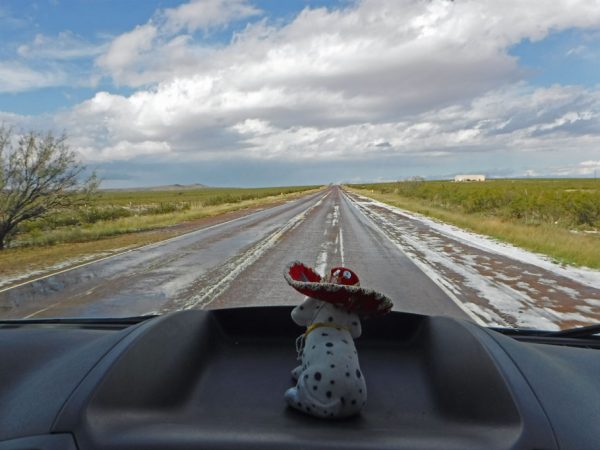 On our way to Tucson on October 31, outside of El Paso, we saw snow. Bob was not at all pleased and wanted to go straight to Mexico – unfortunately we needed to get a few things scratched off a long list before we were able to head south.

In Tucson, we got into a bit of a routine. Up in the morning, turn on the propane heater if needed, fold up all the blankets and sheets, turn the bed back into a couch, dress, and drive up to a nearby park to use its bathrooms for our morning potty business and to flush the contents of our pee bottles from the previous day and night. After a quick breakfast in the van, we’d head off to the library for research, go shopping, or go back to Julie and Jason’s where we were staying to work on van projects. Around 3:30 Julie and Jason would be done working (from home) and we would get showers at their house, then eat dinner in the van, watch ‘sodes on the computer, bed, sleep, do it all over again.

We were living the moochdocking life. Usually when we in Tucson we did this at our friend Deanna’s place, but Cabbagetown friends Julie and Jason moved to Tucson last year and they have a big old lot in front of their house. It seemed more convenient than hogging Deanna’s driveway.

It was the very longest we had stayed in one place while living in the van. Julie and Jason’s lot was perfect with enough distance from their house we didn’t feel intrusive (although I know they’d tell you we were intrusive at all. I think they liked having people living a hashtag (#vanlife) phenomenon camped out in their yard) – except for those showers and some laundry – and on days Deanna worked all day we could use her house for our bathing and Interneting – it was like having a totally stealth life.

We stayed in the lot for 23 days (not counting our 6 day trip to Los Algodones to visit the dentist – more on that next blog) while we prepared for our journey to Mexico. Despite all my research over the summer we still had lots of things to figure out about where we were going, what documents we needed to get there, how we would get money, where we would stay in Mexico City. We needed to buy new clothes and stock up on all our favorite foods we wouldn’t be able to find south of the border. And the van needed just a few more tweaks to make our van life the best!

The to-do list was long, but our stay wasn’t all drudgery and shopping. When we arrived in Tucson our friends David and Michelle were already there visiting Deanna. There was lots of hanging out the week they were in town. There were dinners with Julie and Jason and with Deanna and her parents, Merideth and Ed. There was lots of effort put into getting Julie and Jason’s dog Pearl to stop growling at us and like us. And Greg managed to catch that amazingly awful cold that was going around.

Tomorrow, October 29 (maybe at the exact moment you read this!), we will once again repeat our morning routine, but this time after we dress we won’t head to the park, we will drive out of Julie and Jason’s lot and head south to Nogales – and finally cross the border to Mexico. 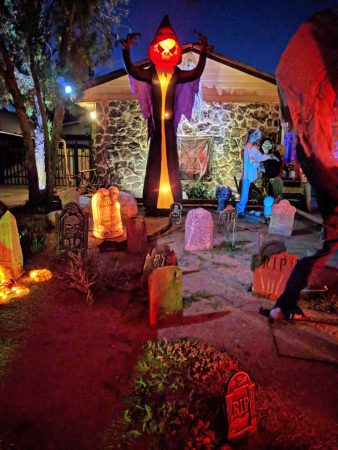 We arrived on October 31 and stopped by an exceptionally decorated house in Deanna’s neighborhood. 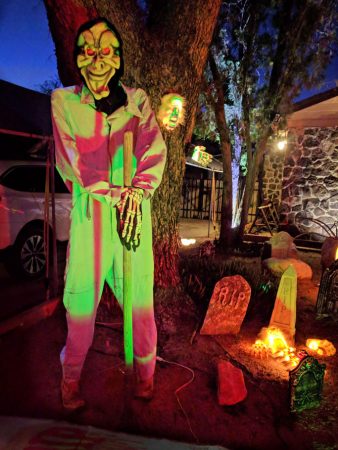 Even though we weren’t dressed up, they let us walk through. 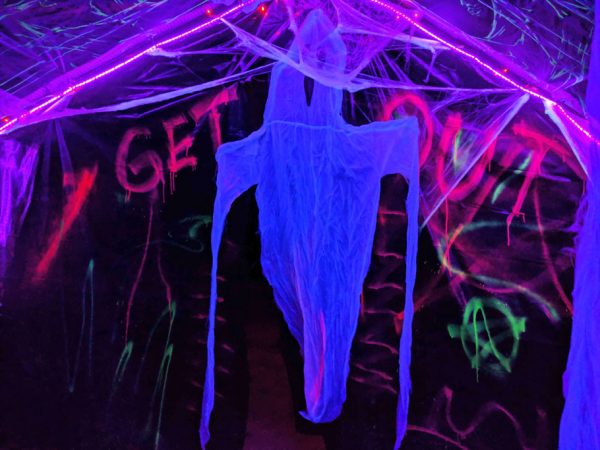 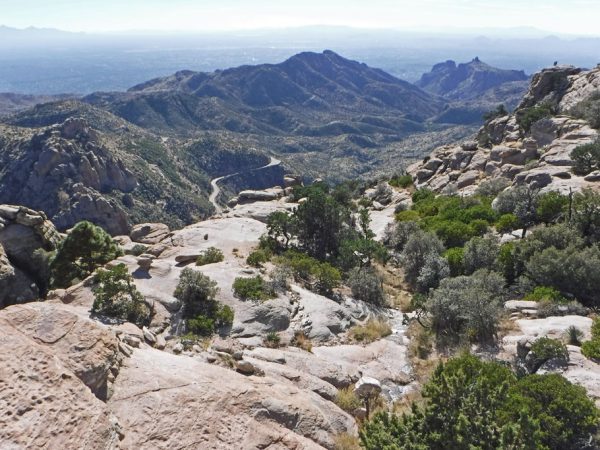 It was kind of funny to be in Tucson and play tour guide, but when Deanna was working we did just that. We took David and Michelle on a guided tour up Mt. Lemmon using an app put out by the University of Arizona. Very recommended! 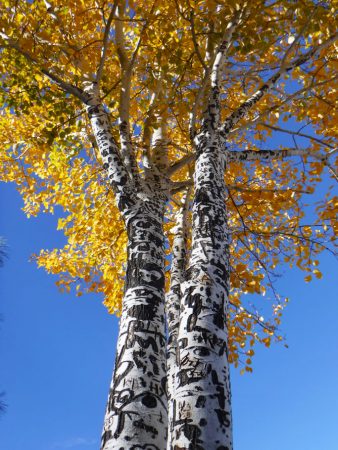 The leaves were turning on this beautiful aspen on Mt. Lemmon. The bark, carved by visitors, made the tree quite interesting. Not sure how I feel about defacing a tree like this. 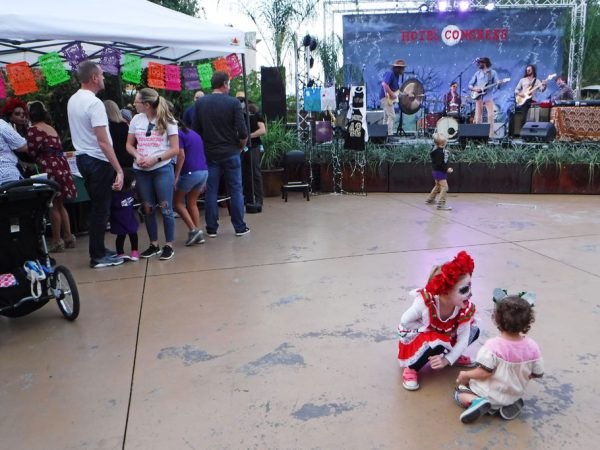 The big event of Michelle and David’s visit was the All Souls Procession. The pre-parade party was at Hotel Congress where there was free face painting (we just had our boring old unpainted faces – we did not sign up early enough) and a band. 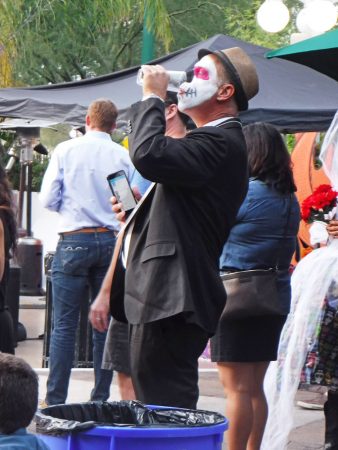 Getting ready for the Procession. 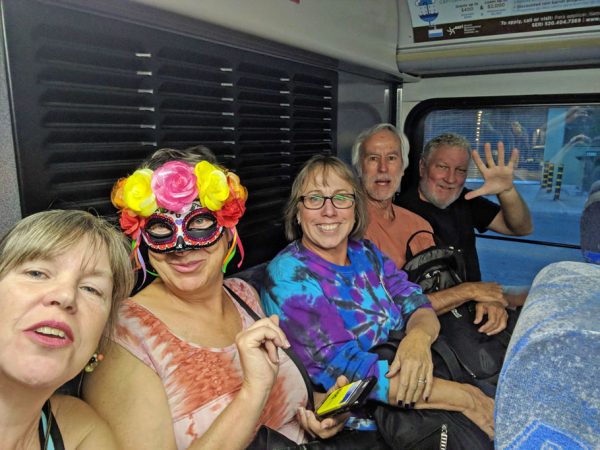 The old gang is all here! (I have known Deanna for 30 years and David and Michelle for 20 plus years) From Hotel Congress we took a bus to the start of the procession.

The Procession began in Tucson in 1990 with a ceremonial performance piece created by local artist Susan Johnson who was grieving the passing of her father. After that first year many other artists were moved to contribute and the Procession grew from there. 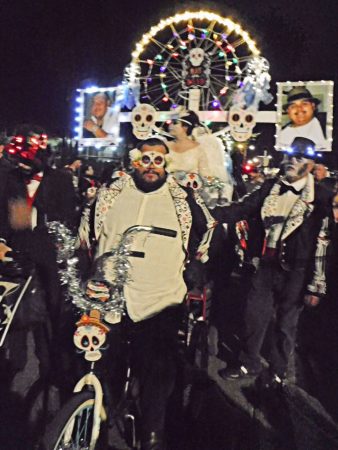 Very similar to Day of the Dead in Mexico, the All Souls Procession is a time to remember the passing of loved ones. 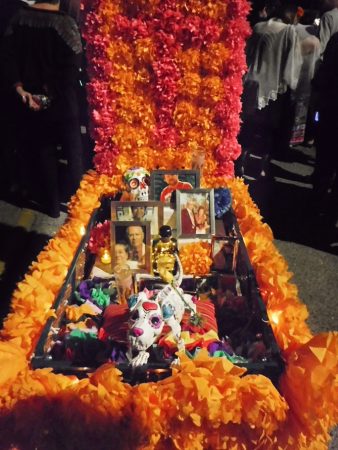 A wagon full of loved ones. 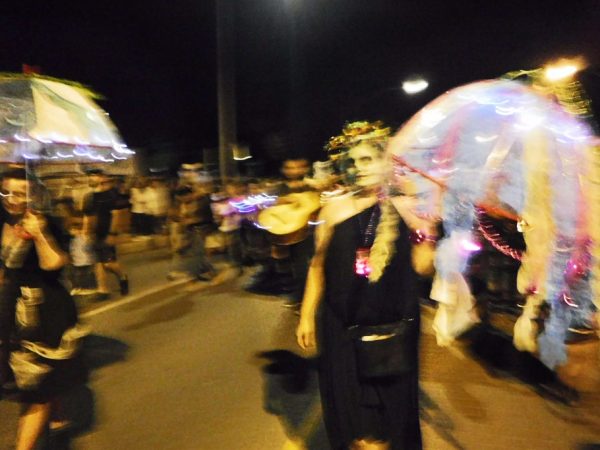 I only have a simple point and shoot camera so pictures are sometimes blurry, but I think I still can capture the atmosphere of the event. 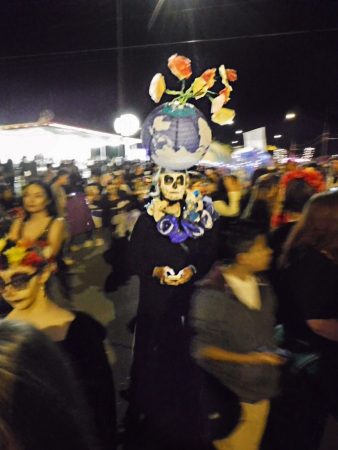 Some people were mourning for specific causes like nuclear bomb deaths. Some people carried the weight of the world with them. 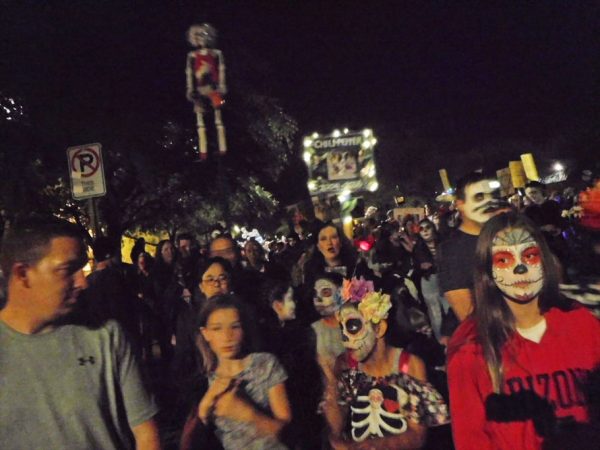 The face painting was wonderful. 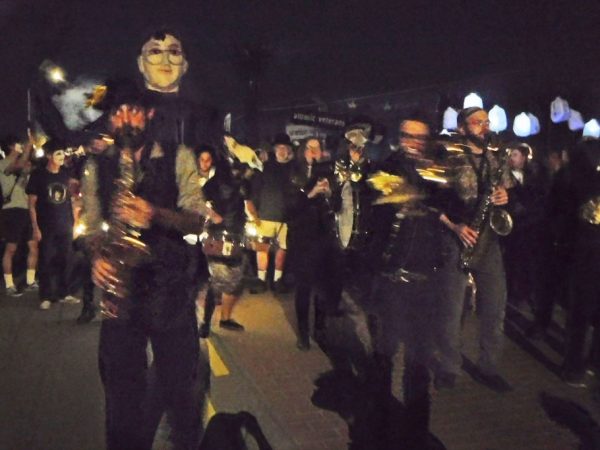 A few bands joined the procession. 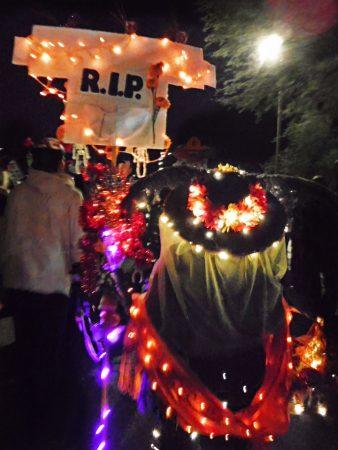 This parade reminded me of the Latern Parades in Atlanta with all the lights. 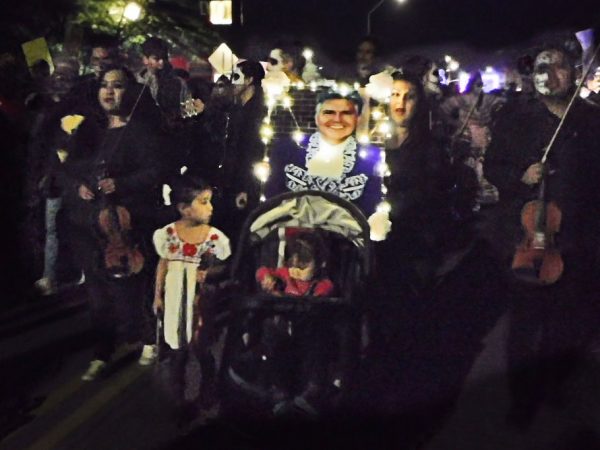 Young and old walked the procession. 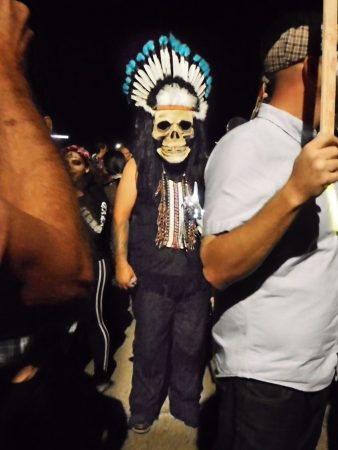 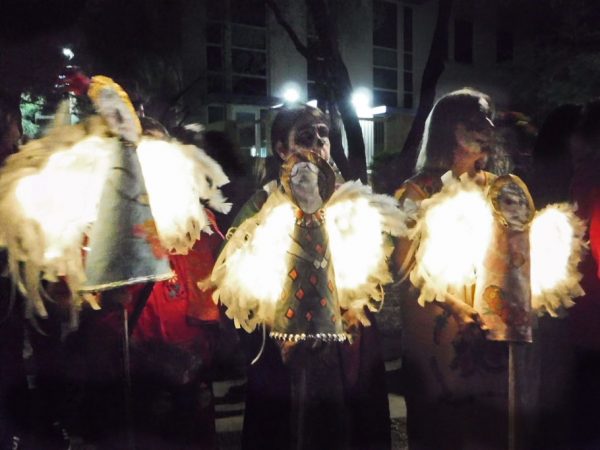 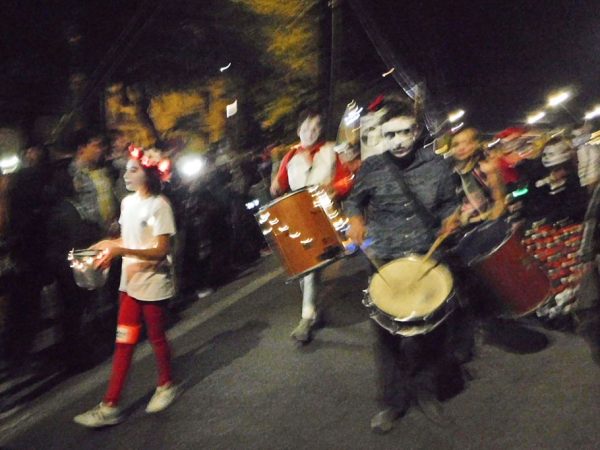 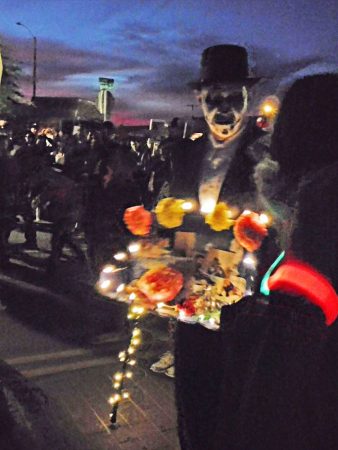 Carrying flowers and pictures of those who passed. 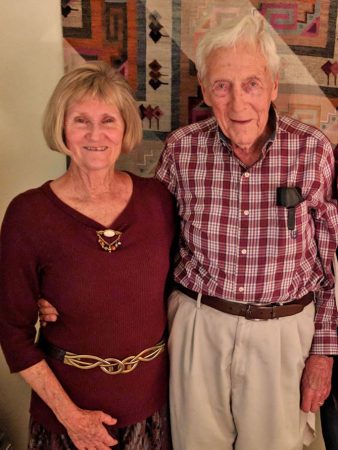 Deanna’s parents, Meredith and Ed. We run into them everywhere! If we had written our blog about visiting Death Valley last year you would know that we totally unexpectedly ran into them there at the visitor’s center and on several tours. We ate dinner with them when David and Michelle were visiting and then ran into them on the river walk a few weeks later! We made plans for an Adios happy hour at their house before we left. Ed, who is 90, still bikes, hikes, sails, and travels. Looking forward to the next unexpected place we run into them! 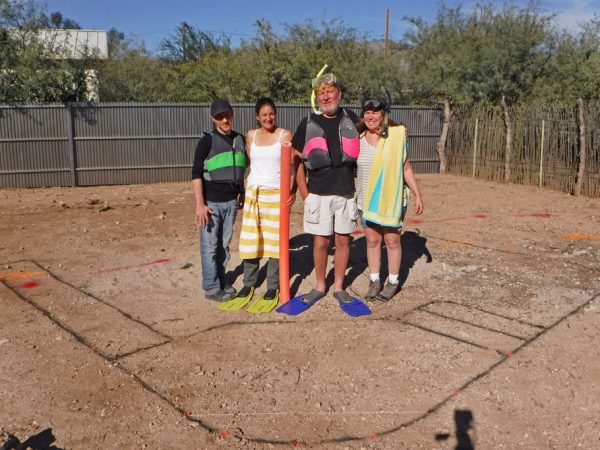 Jason, Julie, Greg, and Duwan. For the first few weeks we were living in Julie and Jason’s lot there was lots of activitiy. They are putting in a pool so often times in the morning we would wake up to be surrounded by work trucks and workers preparing their yard for the installation (mostly guys digging a trench and moving electrical wires). Finally the pool guys came and drew the outline. Can you visualize it? 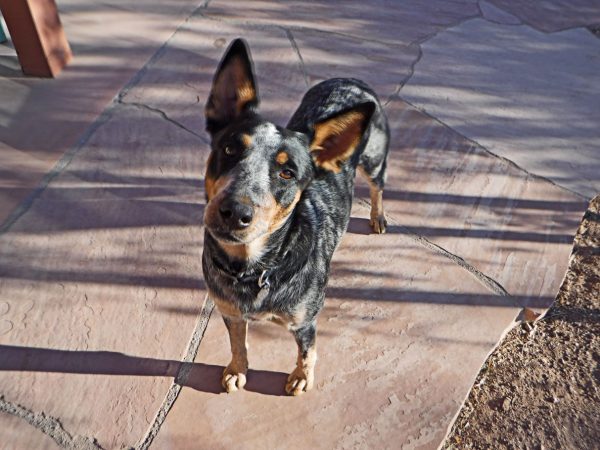 The beautiful Pearl. After 29 days she finally decided we weren’t a threat. Really the very last day was the only day she didn’t growl at me. Gonna miss you Pearl! 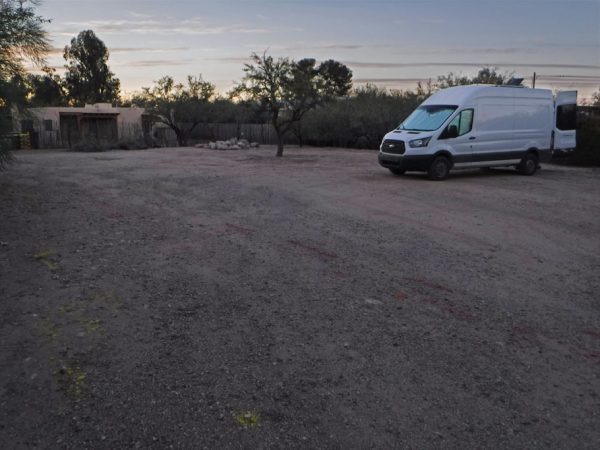 The lot. Apparently Greg and I are the reason that Julie and Jason were able to move to Tucson. Way back a couple of summers ago we were the only ones Julie and Jason felt comfortable house sitting their pets (Ruby, Friday, and Chatter Box – no Pearl at the time). So while we were taking care of the gang they were plotting their move to Arizona. BTW – see that pile of (very expensive) bolders in the pic. We were tasked with protecting them. Apparently there has been a rash of bolder thefts in the neighborhood. We hid them from view with the van from passers by.

4 thoughts on “Plotting & Planning in Tucson”