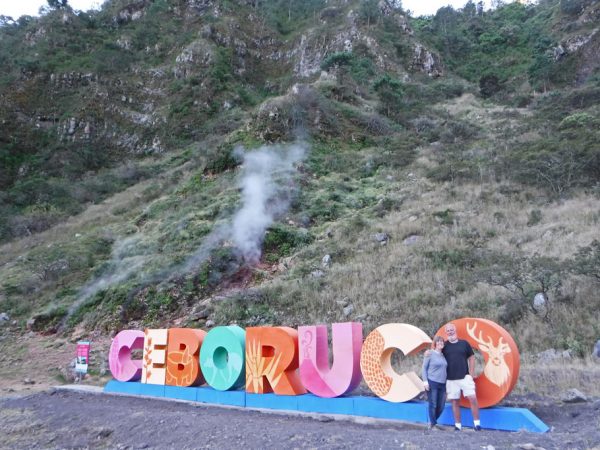 The first stop after we left the beach was the active volcano Ceboruco in the state of Nayarit. Fumadoras hissed out of a side of a hill near our camping area on the volcano. As always in Mexico if a place is anything at all it has big letters. These letters traveled almost 3000 feet up a narrow cobbled road to be here.

Finally, we turned in from the coast. It had been getting warm and we were ready for a change. We headed towards the area of my Mexico map that I had created last summer dotted with interesting things to see and do at every turn. Instead of long days looking for the next beach to camp on we would have short days looking for the next sight to see. A volcano, a Pueblo Magico, and ruins would fill our agenda.

We felt like we had finally arrived at the beginning of our adventure and were ready to dive right in – that is until our computer broke. Camped on the side of a volcano we crawled into bed one night after a long day of hiking ready to wind down with a TV ‘sode on the laptop. I turned the computer on but the screen remained black. I tried turning off and back on again. But the screen remained a soul crushing surface of nothing reflecting back my distressed expression. This was upsetting not only because we wouldn’t know the fate of Mike, Harvey, Lewis, and the now famous princess, but because all of my pictures from the previous weeks lived only on the computer and, of course, because the blasted thing (a Mac) is way too expensive for us to replace.

So we broke out the Kindle and the crossword puzzle book and made a plan to head to Guadalajara to find a computer repair shop on the next business day. More on that in the next post.

* As always, click on pics to enlarge into a slideshow. 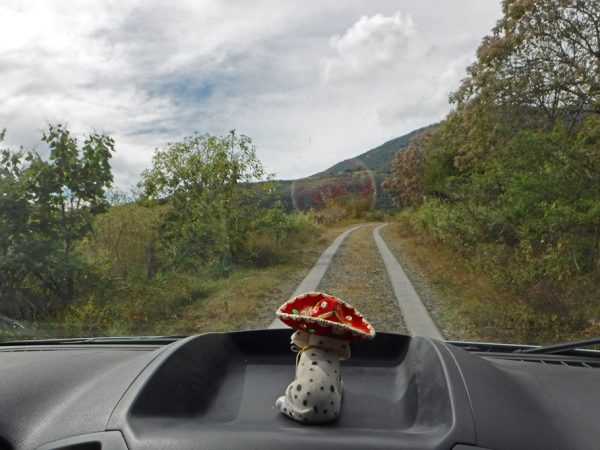 Our ascent up to the volcano started out quite easy on a cobbled road with concrete runners, but eventually turned into a bumpy ride on just cobble stones. 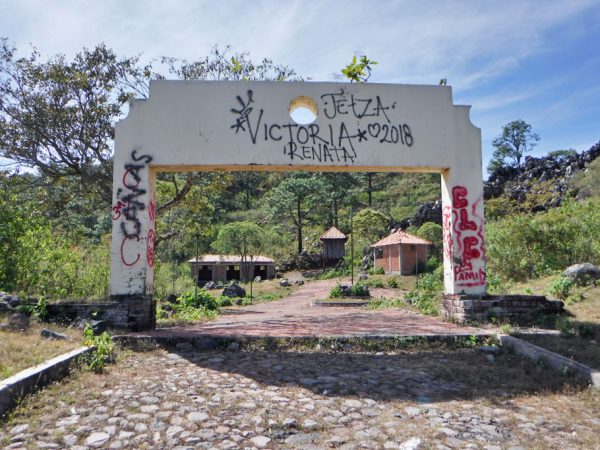 The next morning after we arrived at the volcano we went for a hike to the rim. Abandoned ruins of a museum greeted us at the trail head.

The hike to the volcano rim was long – really long. And when we got there we were unsure if we had made it – expecting a crater that looked more like the ones we saw in El Pinacate. But once we walked around this area and down to the jumble of volcanic rocks in the middle where fumadores were letting off steam, we could clearly see the outline of the volcano opening. 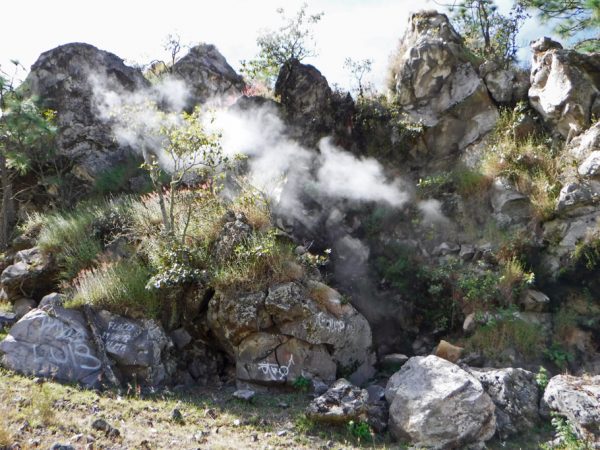 Hissing steam comes from Fumadores at the bottom of the crater. 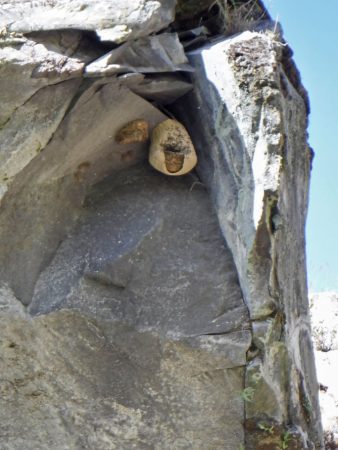 As we ascended to the volcano on the road the day before we saw lots of wooden beehives. Here is one made by the bees themselves. 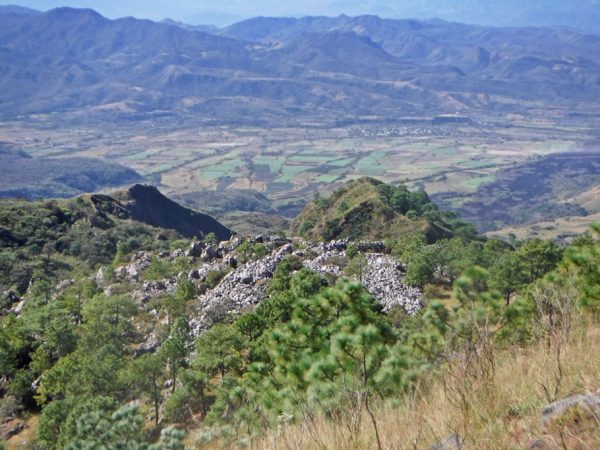 View from the top of the volcano at about 7480 feet. That little cluster of light colored dots on the upper middle right part of the picture is the Pueblo Magico, Jala. The rocks in the lower middle in between the trees are the remains of Ceboruco’s last lava flow in 1875. 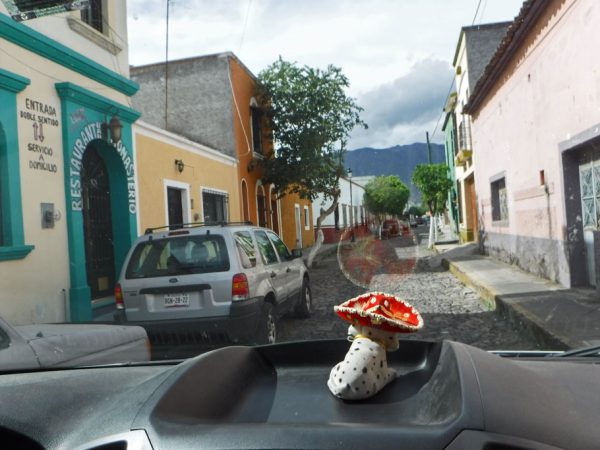 After two nights camping on the volcano we came back down to the Pueblo Magico, Jala, Nayarit. Pueblos Magicos are towns and cities designated by Mexico’s board of tourism as places that offer visitors a “magical experience.” These towns offer natural beauty, cultural richness, traditions, folklore, historical relevance, cuisine, art crafts and/or great hospitality. 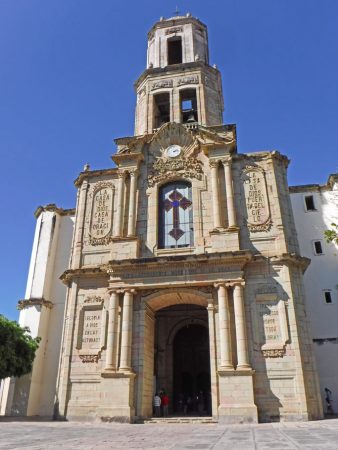 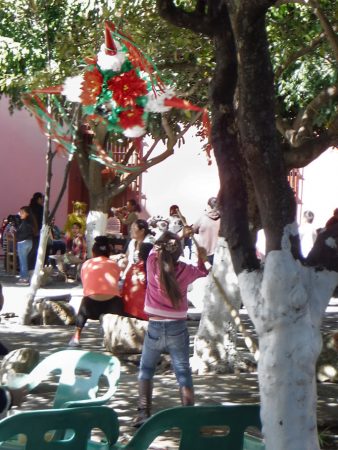 It was Saturday when we descended the volcano and there was lots of activity at the Basílica. Children we gathered in groups participating in different games and crafts. We stopped and watched a group of kids take turns whacking a piñata. One child would swing at it with a large pole while another raised and lowered it with a rope slung over a tree limb. The game was over when the piñata was completely destroyed. The piñata was only full of old newpapers and not candy but once it was reduced to pieces of confetti the children lined up and were each given bags of various kinds of candy. 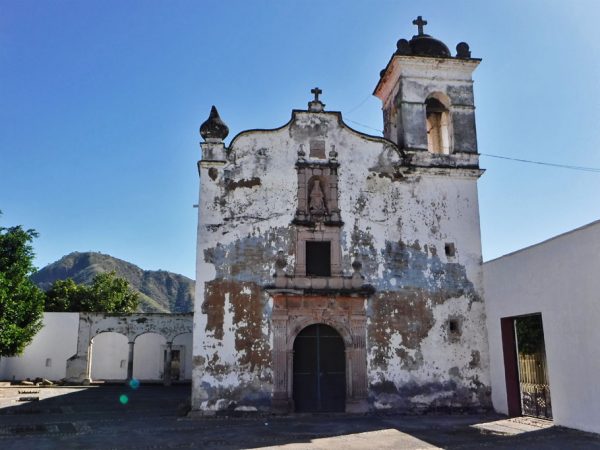 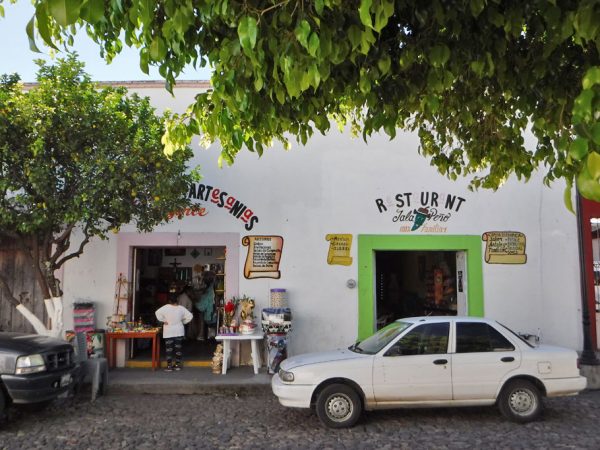 We did a short stroll around the town. The shops and restaurants were colorful and cute. 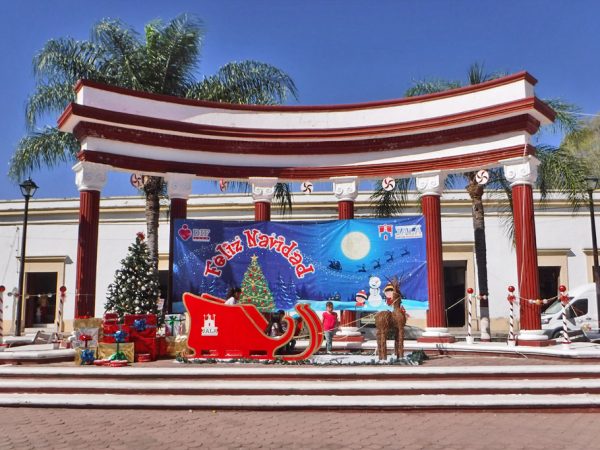 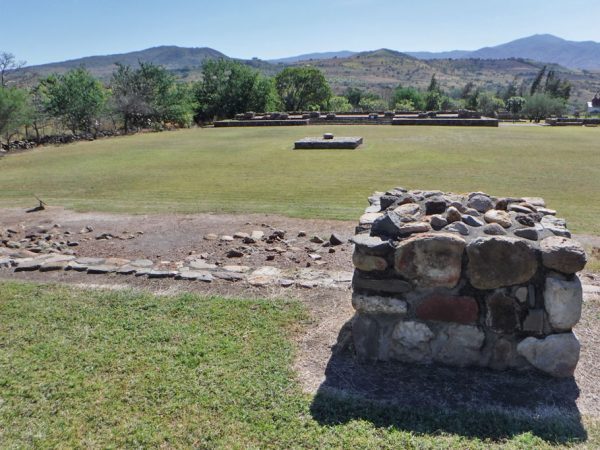 From Jala we headed to the the ruins at Ixtlán del Rio. Here rectangular temples surrounded a plaza. All that remains are the basic foundations. The stone structures were originally higher, and were covered with plaster. Wooden buildings with steeply sloped roofs sat on these foundations. 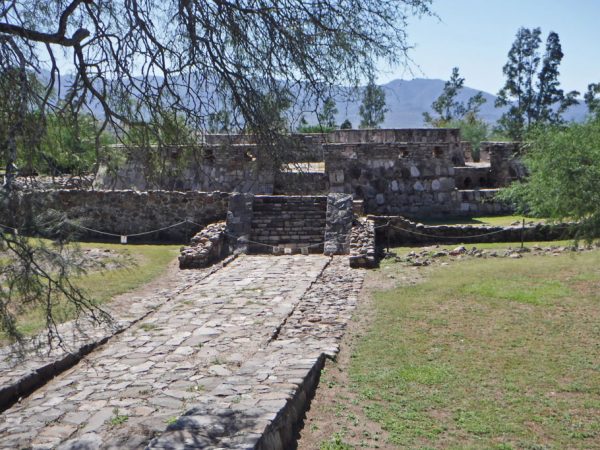 Templo Redondo at Ixtlán del Rio. A rare example of a round temple. 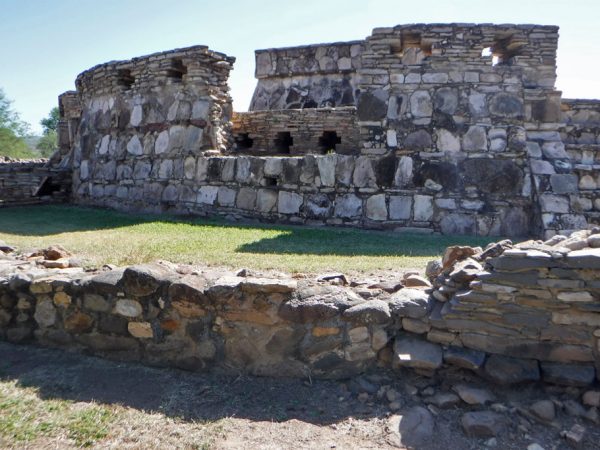 Templo Rodondo. In addition to having plaster covering the sides were also decorated with bas relief stonework. 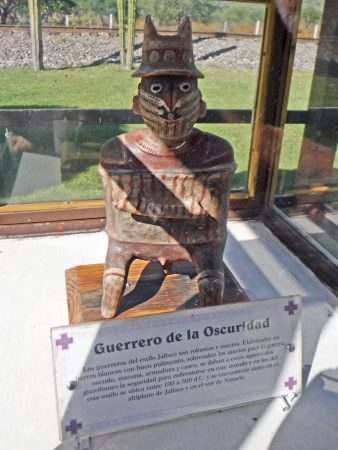 Outside of the grounds of the ruins is a small display of replicas of ceramic figures on an outdoor walking path. This Warrior of the Darkness sculpture is one of the many found here at Ixtlán del Rio. It’s clear from their work that the artists could accurately represent people, but many of the figures are highly stylized charicatures. 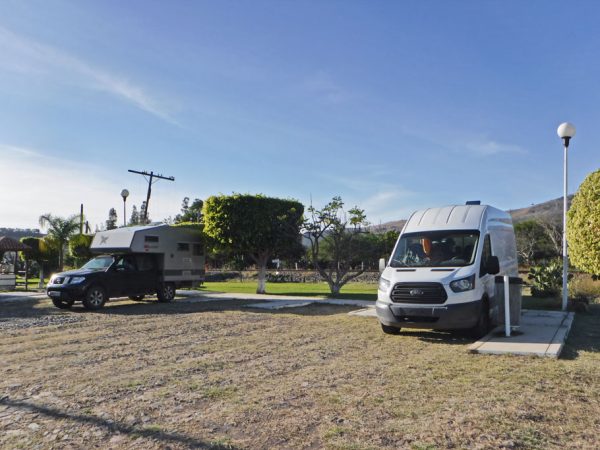 Our camping spot at Ixtlán del Río. We the met a friendly German couple who were overlanding in the truck camper. They had taken a simular route down Mexico’s western mainland coast but had visited different places. It was nice to talk to other people who are really traveling like us. 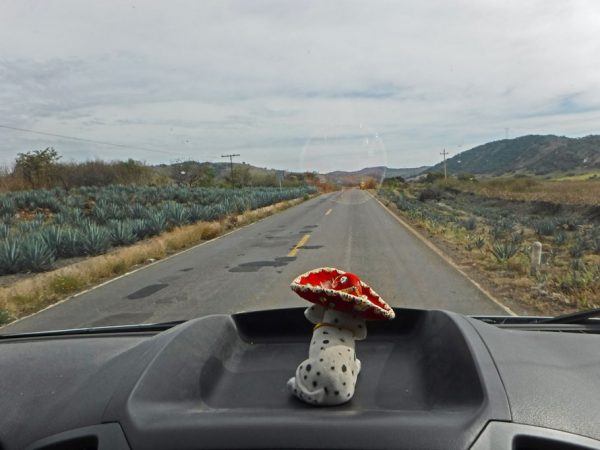 From Ixtlán del Río we hit the road again, passing through blue agave fields. Blue agave is used to make tequila. We thought we might head to Tequila, Jalisco to visit a tequila museum and do a tour to see how tequila is made, but since the computer was broke and we didn’t have much time we decided on only one more stop, at the Teutchitlán ruins, before we hit Guadalajara. 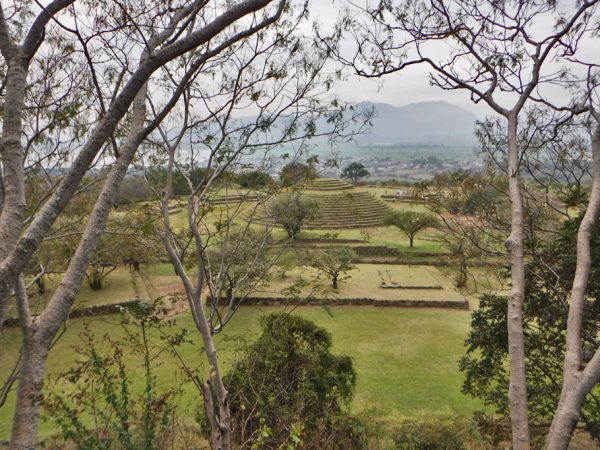 View looking out over the site at Teutchitlán (or Guachamontones). We are standing atop a pyramid like the one shown in the center. The pyramid under us has not yet been excavated. 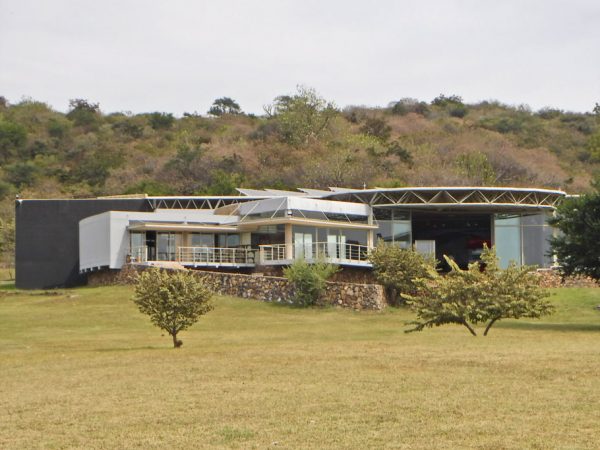 The museum here at Teutchitlán is excellent. We were met at the door by an english speaking guide, who showed us around. As we’ve seen in many places here the atmosphere is very festive, with guides getting groups of people to play the old instruments and learn the dance steps.

Teutchitlán was the cultural center of a complex society from 300 BCE to 900 CE. There are unique circular stepped pyramids here. Statuettes show that the pyramid had a tall pole in the center. The pole was used in ceremonies that recognized the wind god. As a “flyer” mounted the pole, crowds of people would do a circular dance around the pyramid. 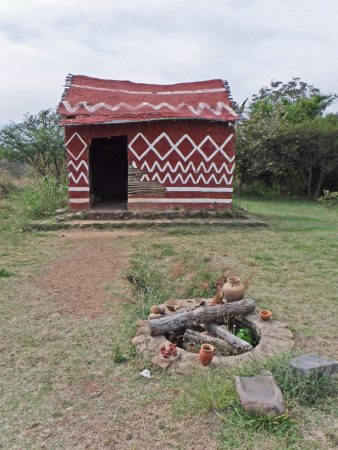 Reconstruction of a family home at Teutchitlán. The walls and roof are made of cane covered with plaster. Three of these surround a common fire pit and work area. 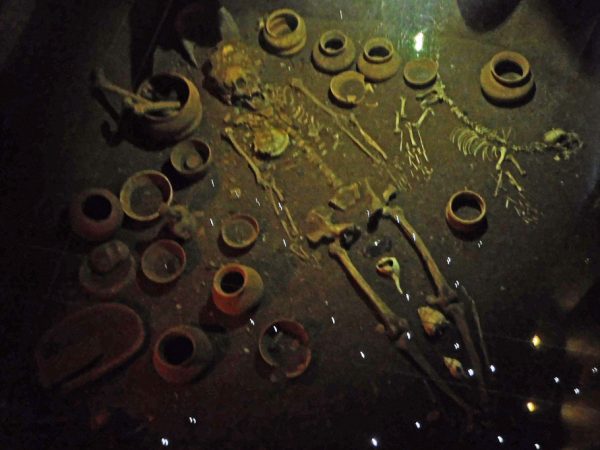 Reproduction of a Tomba de Tiro at Teutchitlán. In this area important people were interred in shaft tombs along with their loved ones, prized possessions, and, in this case, a pet dog. 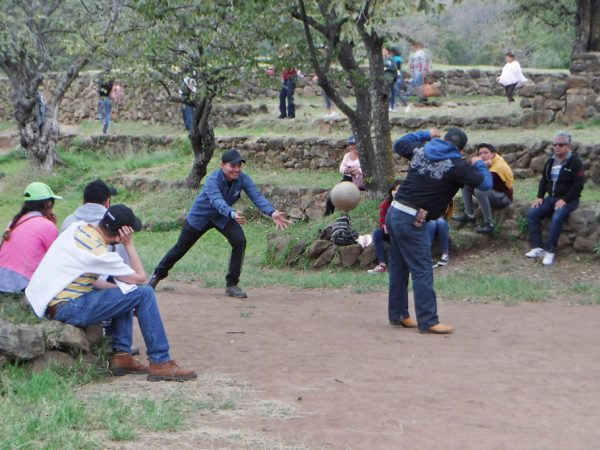 A guide gets a volunteer to help demonstrate the ancient game of Ulama. He tosses a 9 lb. rubber ball, which the volunteer bounces off his hip. 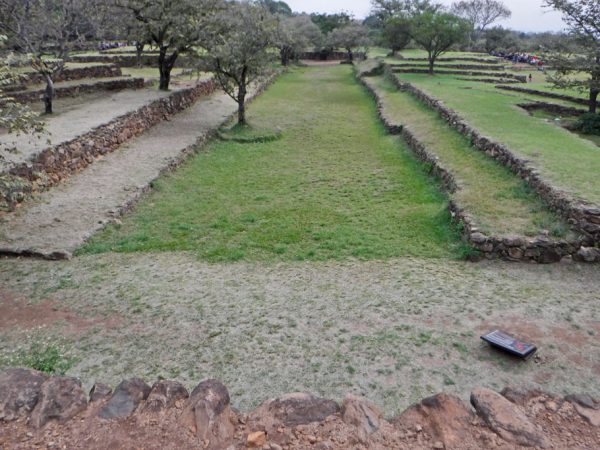 Court for the Ulama ball games. Ulama courts are found at most mesoamerican sites. The game was used to settle important disputes.

8 thoughts on “A Volcano, A Pueblo Magico, and Ruins”