For the last couple of weeks, we have been blogging about all the fun things we did, all of the tasty food we ate, all the cool stuff we learned, and all the beautiful sights we saw in Mexico City during our two-week stay. Now if you are a fan of our Cost of Being a Nomad blog posts, I bet you’re wondering – “Yeah, cool, but what did this all cost?” I was wondering that same thing so I decided to create this special edition of The Cost of Being a Nomad.

And here is a screenshot of those totals: 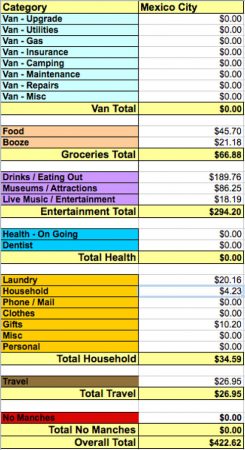 Now, let’s take a small look at some of those numbers:

The van was parked the entire time we were in Mexico City.

We ate out 10 times, drank out 4 times, visited 12 museums, and attended one big live entertainment event. Also included in Entertainment is bathroom expenses when we were out (Bathrooms often cost money in Mexico, sometimes it is just a tip to an attendant or sometimes you actually have to pay to get in. The cost is usually no more than 5 pesos, 25¢ US, and is often worth it to have a clean bathroom, toilet paper, and a seat on the toilet to do your business in.) and tips for street performers.

Eating out in Mexico is sooo cheap. Our most expensive meal in CDMX was about $27 for the two of us. This included food, drinks, and leftovers for lunch the next day.

We mostly ate breakfasts and at least one small meal a day in which kept the eating out expenses down.

This includes buying our grandson a gift, toilet paper for the Airbnb, and our laundry. It also includes making copies of our Mexico City driving permit (more about that in the Mexico City Tips section below).

We had lots of laundry by the time we got to Mexico City. I thought there would be a machine at the Airbnb and although there was, we didn’t have access to it. We ended up giving the apartment caretaker our laundry which she did for a tip. It was 5 loads so we tried to tip well.

This is mostly for the subway which costs 5 pesos a ride (About 25¢ US). It also includes our bus trip to Teotihuacán (for more info on that see below).

Yay! for no No Manches expenses!

Ok – so our spreadsheet total does not include the cost for the Airbnb (that was split with our friend Wayne and was paid in November). Our half was about $240 US. The spreadsheet also doesn’t account for some of the food and beer we brought with us that was consumed at the Airbnb – which probably comes to another $40. This brings our Mexico City total up to about $704.

This is our final post in our Mexico City series. If you missed any of the previous posts and are interested in all the places we went and things we did in Mexico City to spend all this money check all our Mexico City blog posts here:

* Click pics to enlarge and view in a slideshow.

What do you think? Did we do good or not?