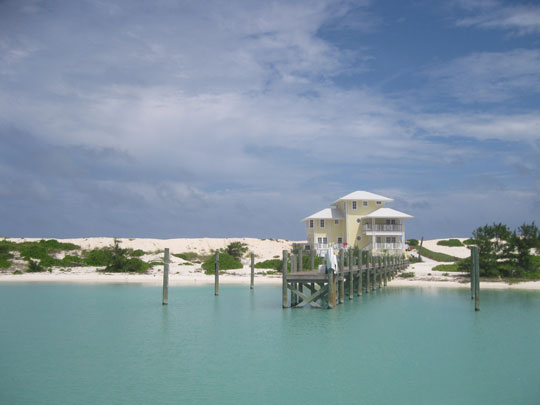 White Sound looking toward the Atlantic beach side. The water had an odd creamy look to it here.

A very nice reef surrounds the first dot of land sticking up out of the water nearest the blue house with all of the barking dogs off of Tilloo Cay above Tavern Cay. On Tuesday morning I got into the water to explore the reef along with everyone else. The fish are not over abundant here like they are at Mermaid Reef, but there is still plenty to see. It seemed more natural than the previous day’s reef. I liked it.

Earlier that morning we discussed the agenda for the rest of the day. I thought we might dinghy over to Lubberâ€™s Landing for lunch, but I had also heard that Brown Tip was playing at the Abaco Inn in White Sound on Elbow Cay that night and that sounded like fun as well. On the cruiserâ€™s net we heard that Sea Spray Marina, also in White Sound, was holding their Gumbay festival featuring limbo dancing, rake and scrape, junkanoo, and a live band, that same evening. It sounded like White Sound was the place to be, so we made plans to head that way.

From where we were anchored, the entrance to White Sound was only a couple of miles north, but shallow water, too shallow for us even at high tide, lay between us. We would need to go all the way around the shallow waters and sand of Lubberâ€™s Bank to the west, then cross back east through water measuring depths of 5 to 6 feet at low tide and down the coast to the entrance of the channel leading to the marina. This channel was also very shallow and we would have to time our arrival with a rising high tide.

Shortly before lunch we made ready to leave Tilloo Cay when we encountered a problem.

Here is Greg to tell you about this one:

We are ready to leave our Tilloo Cay anchorage. The hatches are closed, the doors inside are all latched down, through hull valves are closed, sunscreen is being lathered on, but the engine won’t crank.

After we check a few things, Duwan says the glow plug switch won’t engage properly. Finally she pushes it and it just pops off and falls behind the console. It gets quiet all the sudden. But being a mind reader, I can hear what our guests are thinking. “Does anything on this boat work? Do they have towing insurance? Is there even a towing service around here?â€

After pulling everything out of the lazarette and unscrewing a partition I find I can barley reach the back side of the control panel. I fool around with the switch for a bit, but it’s shot. I stick a screwdriver between the wires leading to the switch and get some sparks. Then I just hold the screwdriver in place until the glow plugs are warm enough for the engine to start.

Don’t need to use my mind reading skills to measure the collective feeling of relief with this crew.

Because the main halyard winch had stopped spinning the day before we had to find a new way to raise the mainsail. I pointed Blue Wing into the wind and put Debbie at the helm. Greg raised the sail as much as he could and then went up on deck and used one of the many winches on the mast to pull the sail up the rest of the way. Back in the cockpit I pulled the halyard through the mainsheet cleat to lock it down. 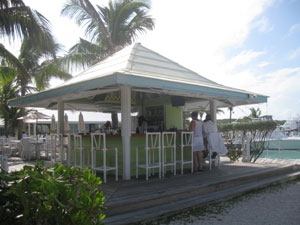 We had a nice sail around Lubberâ€™s Bank. When we got above Lubberâ€™s Quarters we dropped the sails and cranked the motor. Greg had plotted us a course just below Porgee Rock through the shallow water. I watched the GPS and motored slowly from waypoint to waypoint. Most of the way there was more water than we thought there would be. This was not the case in the channel into White Sound. At one point I watched the depth meter drop from 1 foot to 0 rapidly. Luckily we did not hit bottom and the depth shot back up.

Getting into the marina was another challenge. When we had called the marina earlier on the VHF we had been assigned a slip on the last dock. Rounding the corner to the lane leading to this spot there was a giant powerboat in the first slip of the dock finger across from ours. It was twice as long as the slip was designed for. I had to steer around it to get into the lane. No one from Sea Spray was there yet to assist us, so the crew was keeping an eye out for our slip number. When we finally spotted it we found a boat already parked there. We decide to pull into the adjacent slip, but because I had to steer around the gigantic boat sticking out in the lane I was now at a bad angle to turn into it. I tried, but as soon as I realized that it wasnâ€™t going to work, I immediately shifted into reverse and gunned the engine. Behind me was the gargantuan boat. I quickly kicked Blue Wing into forward and throttled up again, moments before I would have hit the ginormous boat. I tried for another slip, but the wind was too strong, I couldnâ€™t get into it. I hit reverse again, but this time I realized that I was in the perfect position to back into a slip. As I rounded into this spot our help finally arrived on a bicycle talking on the VHF. I yelled, â€œWe need help,â€ and he came over immediately. I threw him a line and he tied up the stern. Greg tossed him a bow line and he dropped it. The wind was pushing our bow into the adjacent slip. I gun the engine forward, but couldnâ€™t go anywhere. Somehow, after much struggle and a little high blood pressure, we finally got Blue Wind secured to the dock. 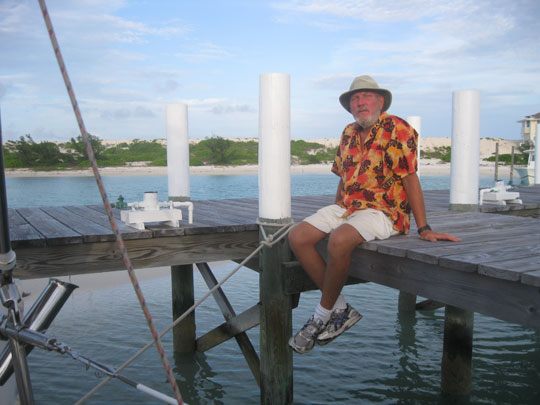 Greg waiting on the dock.

Iâ€™d like to think I handle the boat fairly well. I do most of the driving. This may just be a control issue, but I also just really enjoy it and at this point have more experience than Greg. Docking is something we rarely do, so although Iâ€™d like to improve on my docking skills, it just isnâ€™t going to happen without more practice.

I sat in a marina in Florida once and watched a guy dock his boat completely by himself. I was in awe. We had just finished docking our charter boat with the assistance of the entire crew (6 people). We need to learn to dock like this guy, I thought. But unfortunately I am not sure when or if we will ever be at that point. We need help. I am not sure if the situation would have been any better if assistance had been there when we arrived at Sea Spray, but I am pretty sure things would have gone better if the marina hadnâ€™t assigned us a slip with a boat already in it and hadnâ€™t assigned the mammoth boat to a slip that blocked half our lane. 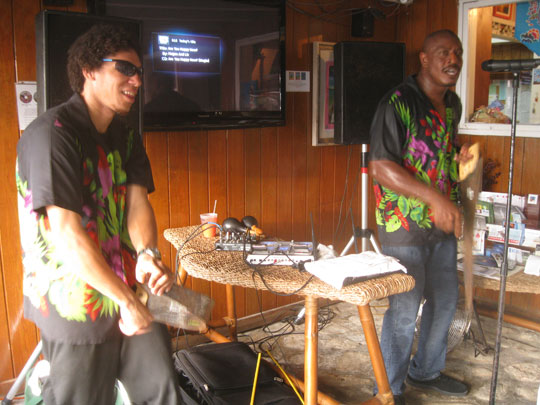 Brown Tip on the right and his saw playing partner on the left.

It was mid afternoon and we were happy to be settled. Debbie and Karen had eaten while we were underway, but Greg and I had skipped lunch. We do this often when we are traveling. We were not that hungry, but Debbie and Karen wanted to treat us to a snack at the tiki bar.

At the bar we met a sailing couple who were anchored off of Elbow Cay above Tahiti Beach. They told us that Sea Spray free shuttle service would take you to and from the marina to and from anywhere on the island. Debbie had been out of the water all afternoon. Karen and her decided they wanted to take the shuttle and check out Tahiti Beach. Greg joined them, but I declined. I took a shower and nap on Blue Wing, instead.

That evening we headed to the Abaco Inn, just a short walk from the marina, for dinner and to see Brown Tip. 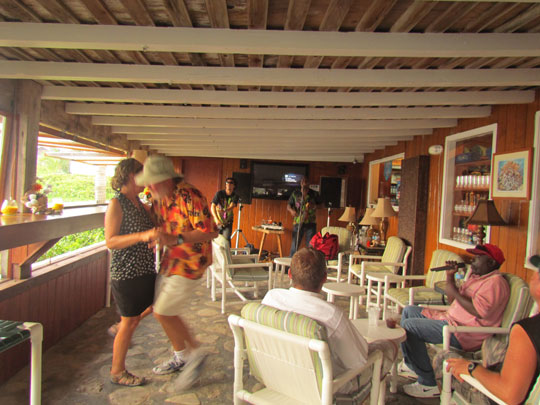 Greg dances with his tanned woman. Photo by Karen Russian

Brown Tip is a local boat bottom cleaner and rake and scrape musician. After seeing Brown Tip I am still a little fuzzy about what exactly rake and scrape is, except that it includes a saw played as a percussion instrument.

I imagined that Brown Tip would sing while he played rhythms on his saw. His act was something like this, but not what I expected.

Brown Tip performs to prerecorded music. He has a musical partner who seemed to do most of the saw playing. BT occasionally plays the saw and mostly, but not always, sings along with the songs. I think the real attraction of his act is his energy and his discourse between songs, which seemed to mostly be comprised of stories of women he wronged and flirting with members of the audience. Karen was flirted with at least twice and I got a mention, being told that he didnâ€™t know what I was doing to look so good, but I should keep doing it. I donâ€™t know what I am doing either, but I think it is just the tan. 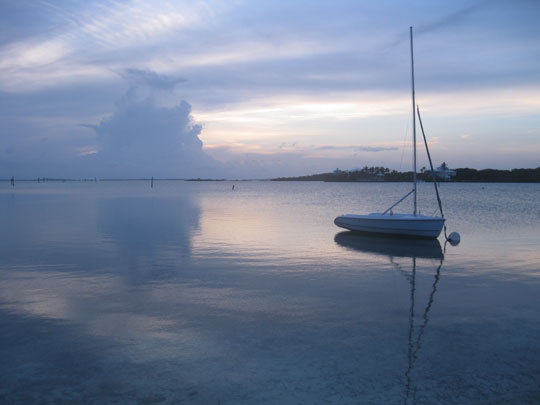 A view of White Sound from the Abaco Inn just after sunset.

Eventually we moved out the patio to order dinner. The service was slow and mosquitoes descended upon us as we waited. We didnâ€™t bring any bug spray and the gift shop was sold out. The bites were becoming intolerable and I thought we would have to leave before our dinner arrived when Debbie used her amazing smile and charm and borrowed some spray off another diner.

It was late when we finished our meal. We had missed most of the Gumbay Festival, but we arrived back just in time to catch the Junkanoo.

Junkanoo is essentially a very energetic marching band playing brass instruments and goatskin drums, wearing elaborate feathered costumes and headdresses, dancing along with the lively rhythms. It is a tradition that Bahamians seem to be very proud of. It is usually performed around Christmas time, on New Yearâ€™s Day, and at festivals like this. I was glad we finally got a taste of it.

It was a full day of sailing drama, adventure, and entertainment. We had another big day planned for the next day. Back at Blue Wing sleep came swiftly and soundly. 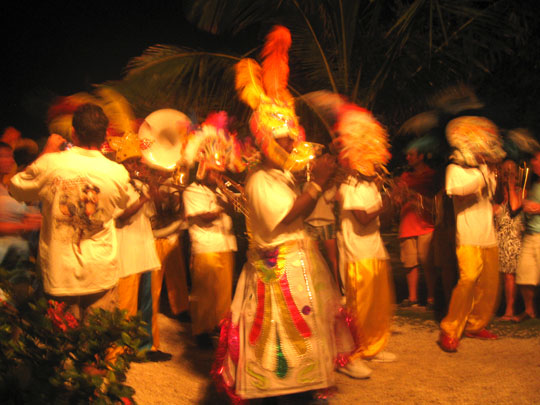 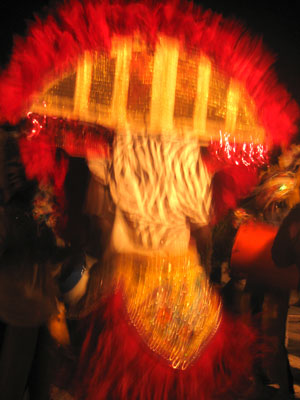 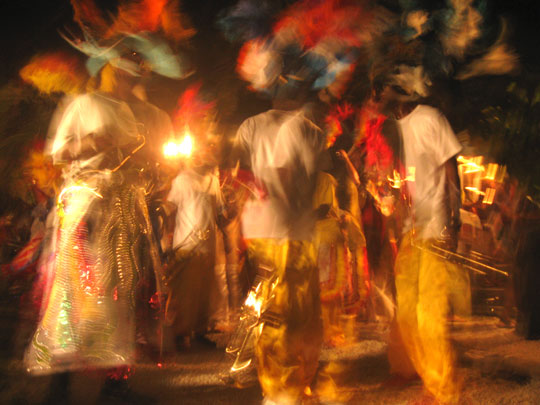