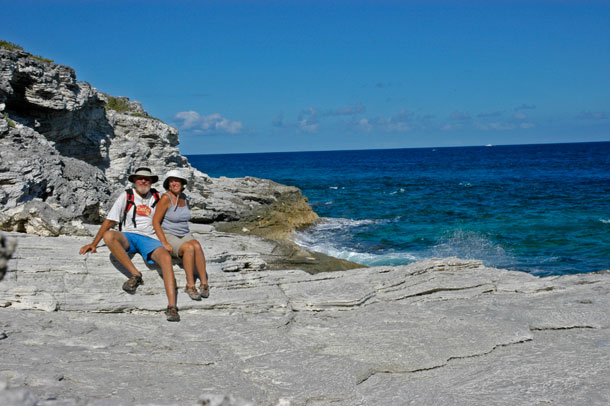 Duwan and Greg at Cambridge Cay with the Exuma Sound in the background.

We are slowly making our way down the Exuma island chain. Currently we are anchored off of Bell Island. This will be our last stop in our tour of the northern Exumas. We will turn to a new section in our Exumaâ€™s cruising guide tomorrow and enter the Central Exumas. Our plans for this season on the water were to visit a few other countries, The Dominican Republic, Puerto Rico, but we have decided there is plenty of Bahamas to see and we arenâ€™t sure if we are ready for the big jump to the DR. But things are going well on the voyage so far and many things are improved from last year. We are busy writing up accounts of all of the places we have visited so far, but I thought I would take some time to give you a real time account of the state of our journey. Here are our status reports:

I am not feeling the weight of homesickness I felt on our previous voyage. I do think of home and my friends often, but those thoughts donâ€™t obsessively occupy my mind. When we watch TV episodes on the computer in the evening, although I sometimes wonder why the characters are bobbing up and down, I am no longer envious of their every move. I have to admit; we have been watching lots of westerns and space exploration sci-fis, so comparatively we have it pretty good. I am so glad we donâ€™t have to eat food squares and that our only treat isnâ€™t canned peaches and pears.

I am crediting my improved disposition to the (mostly) lack of seasickness. My nausea medicine, when taken properly, seems to be working when we cross the big water from one island group to another. Ginger also seems to help. I have been eating it as often as possible, making marinades, pasta salad, stir-fries, fried rice, and sandwich spreads with it. When things get too rocky and woozy on Blue Wing we dinghy to shore. After a short hike I feel better.

Gosh, I havenâ€™t had to type up a status report in over a year. Iâ€™m enjoying the differences between our first cruising season and this one. My sweetheart feels better. Weâ€™ve been in enough hair-raising situations to know each otherâ€™s capabilities. This makes new â€˜excitingâ€™ situations less scary. We are generally better equipped and provisioned. And last season it felt as though we were running away from a â€˜normalâ€™ life. Now it feels as though weâ€™ve established a new norm: ambling toward the next discovery. Cheers Yâ€™all. 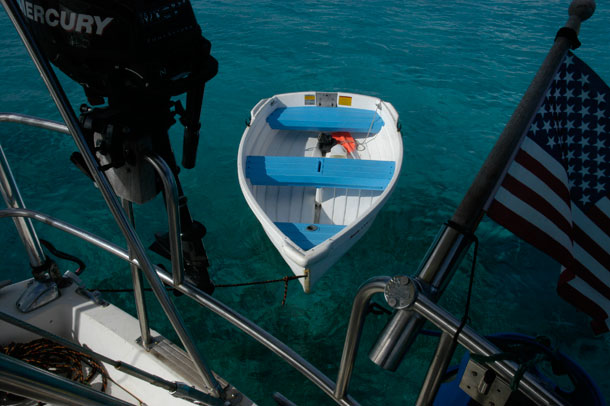 Fever, always ready for a row.

Our new dinghy, Fever, is doing great! We are doing so many things and going so many places with Fever that wouldnâ€™t have been possible with our dink, Little Willy John. Poor Willy John never really had a chance. We didnâ€™t even name him until after we had practically beaten him to death dragging him across sand flats, puncturing him with baby conch shells and most likely making his old wounds worse.

Fever, on the other hand, is rugged. He is constantly bobbing at Blue Wingâ€™s stern ready to head out to the next adventure. 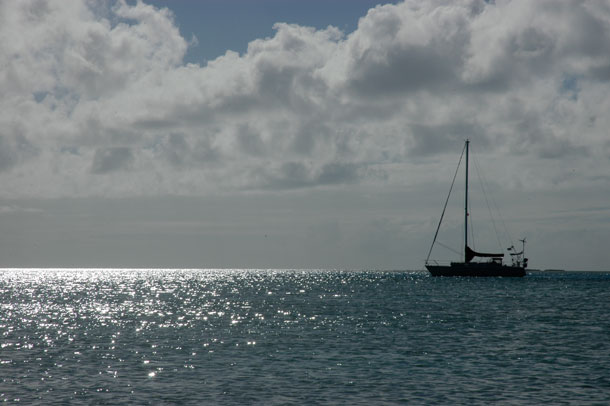 Blue Wing is 30 years old this year. She is doing great except for a few minor leaks, but, hey, 30 is old for a boat and who doesnâ€™t leak when they get old. Fortunately we can address Blue Wingâ€™s leaks with a little bit of caulk.

Her new batteries are doing great. With the slightly longer and brighter days, we have been able to keep the fridge running and all of our electronics charged.

Most importantly nothing vital to life support has broken recently.

Our adventures, stories, and photos are accumulating. As we continue our journey we will endeavor to take time out to write them up and share them with you. Thank you for following along with us. I hope your statuses are well. If so, or if not, here is a Bahamian sunset for your dreams. 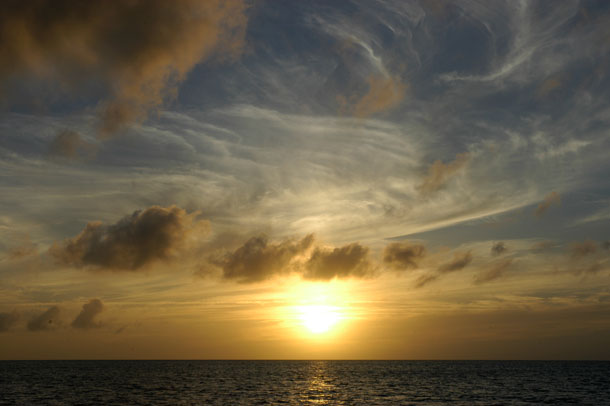 The sunset as seen from Norman’s Cay.

One thought on “Status Report”