In the morning, flocks of Tropicbirds make passes over patches of water looking for their new dayâ€™s repast. From a distance they appear as white flakes in a shaken snow globe, gently hovering and swirling in the sky. Up close, you can see their brilliant white feathers, long trailing tails, black tipped wings, and radiant breasts reflecting the warm azure color of the sea below them. With bellies full, one by one, they head back to their nest hidden in the thick brush and stone of the paradisical beauty of Conception Island.

Conception Island is a 3 mile long, 2 1/2 mile wide Bahamas National Park bordered by the deep waters of the Exuma Sound in the west and the Atlantic Ocean to the east. It is a sanctuary for migratory birds, sea birds, and green turtles. We spent 4 days there hiking its coastline, exploring its mangrove creek, enjoying the company of friends, snorkeling, and riding out the uneasy seas of a weather front. 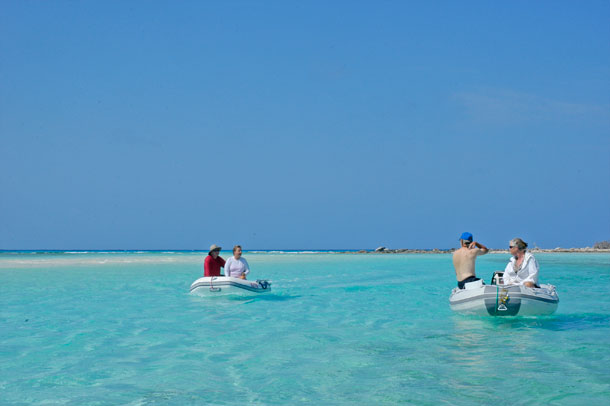 Our first morning at Conception we got a call on the VHF radio from Chris and Elizabeth, cruisers we had met in Long Island. They were going to explore the mangrove creek with a few other couples and wanted to know if we wanted to join them. The creek was a fairly long dinghy ride away and outboard had been acting up again, so we had to decline. No problem, they said, we will pick you up and you can share a ride with one of the other couples. On the left are Chris and Elizabeth. 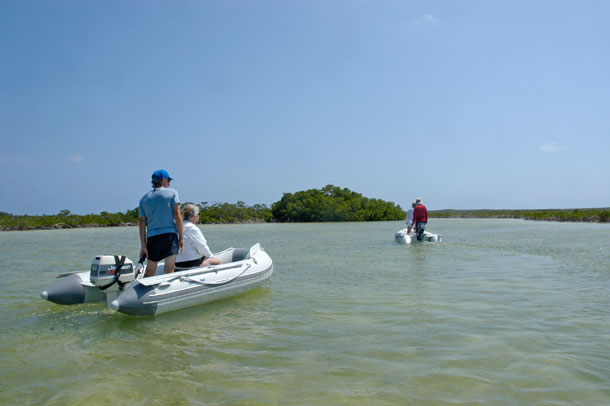 The creek was full of wild life. We saw lots of rays and turtles, but they were all too fast or too far away for me to get a picture of. 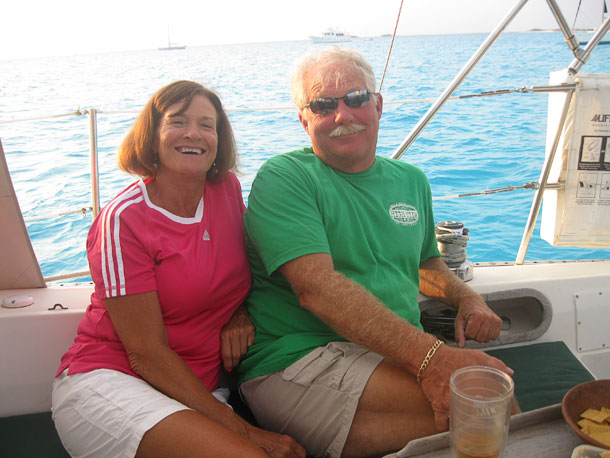 Our friends Patti and Don joined us for pizza on Blue Wing our first night in Conception. 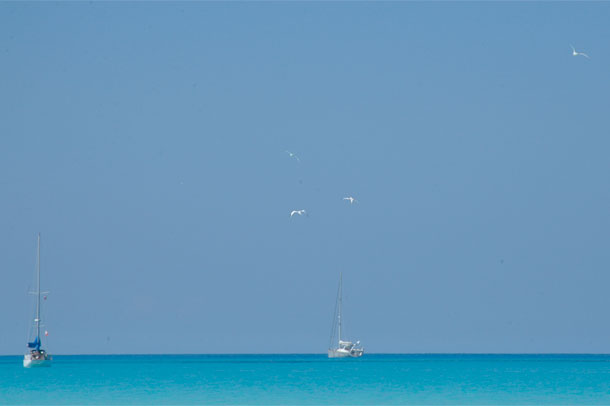 Tropicbirds fly over the anchorage. 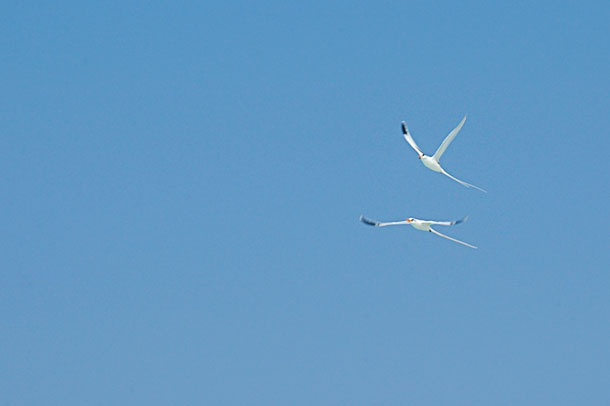 Sometimes the Tropicbirds like to fly in pairs. I think they were showing off for the camera. 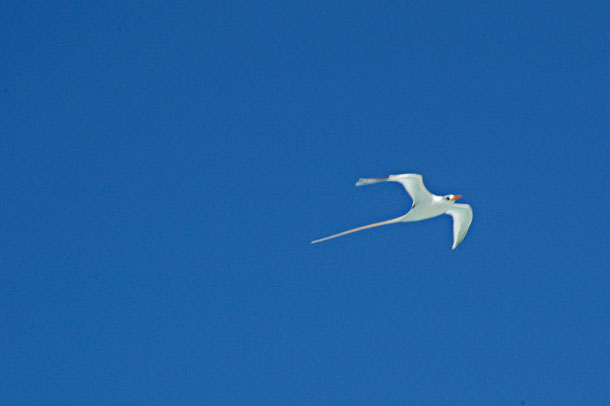 A Tropicbird soars through the sky. I got lucky shot on this one. I was standing pretty close to this ones nest as he flew into shore right over my head. 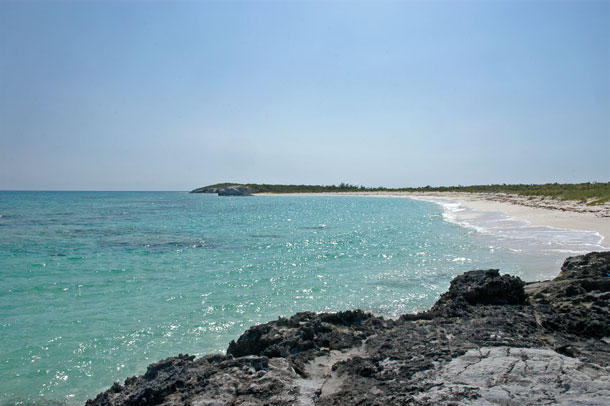 View of the beach on the north side. 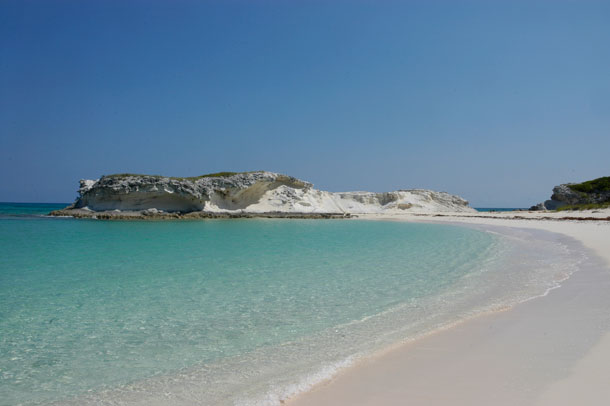 A view of the beach on the north side of the island. If you look very closely you can see a rope hanging down the middle of the white rock formation. We used that rope to climb to the top of the cliff. 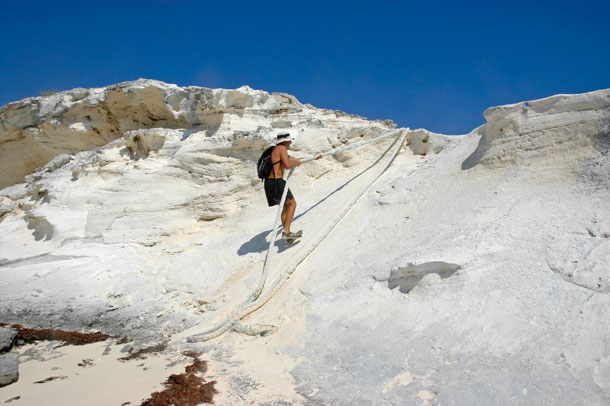 Climbing up a cliff to have lunch. After lunch we hiked a little bit and then returned to the boat where Don and Patti picked us up to do some snorkeling. 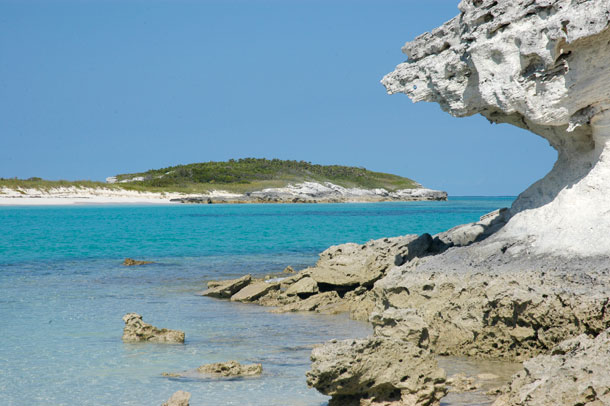 A view of the north tip of the island. 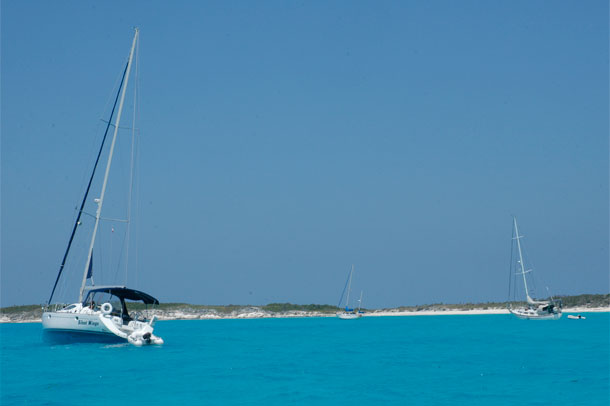 Forecast for the day: the calm before the storm. At 2:00am we had a quick burst of southwest wind followed by two to three foot rollers for the next 16 hours. You can see how the boats rocked from side to side. We would have moved to the other side of the island but it was supposed to be even worse there overnight. Putting out our trusty brindle helped some. The overnight storm? Never materialized. 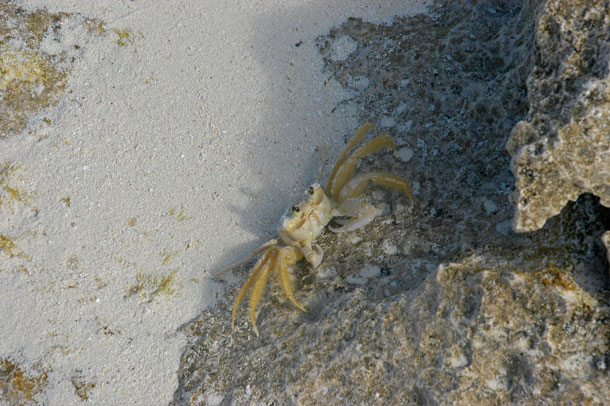 Crab on the west beach. 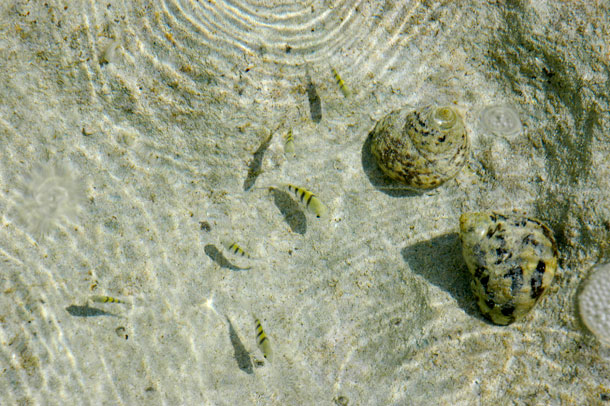 Sergeant Majors and turban shells in a tidal pool on the north side of the island. 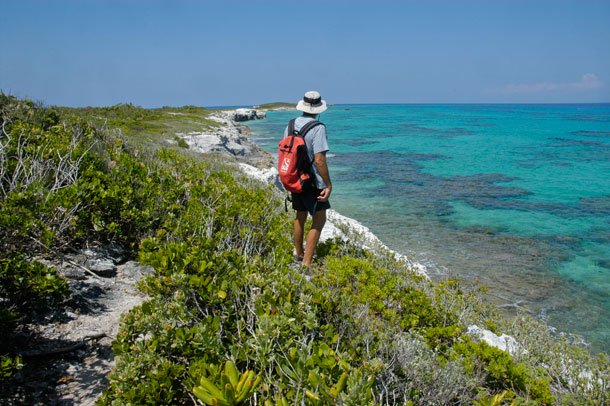 We hiked a trail along the north side. It was narrow and pretty close to the edge in some spots. Notice the coral heads. They stretch out 4 miles north of the island. 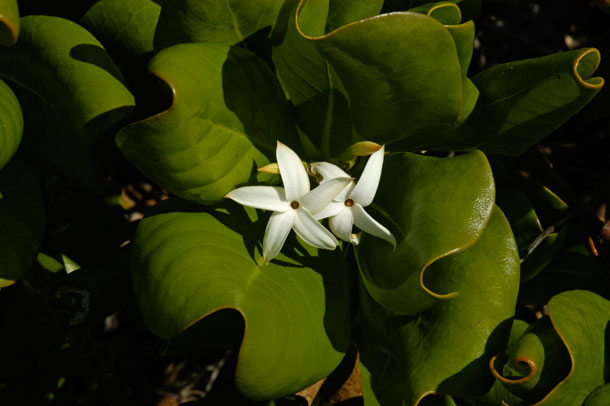 We haven’t seen too many wild flowering plants in the Bahamas, so this was a treat. 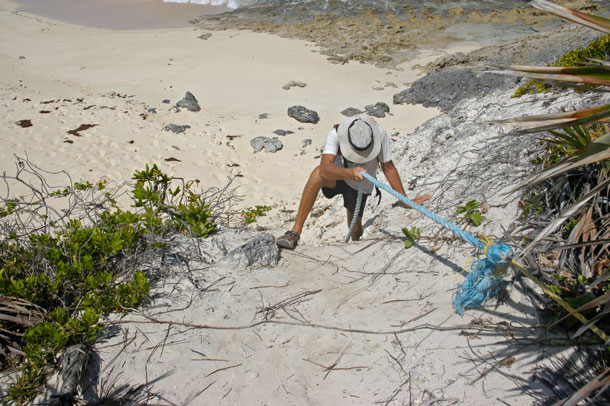 In two spots along the trail we had to use ropes to climb up steep inclines. 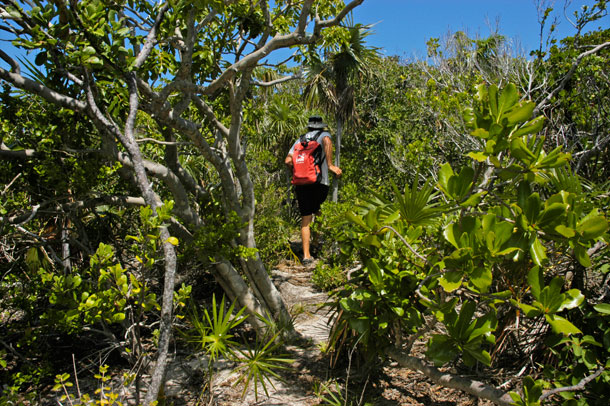 The trail took us away from the coast line and through some thick brush. 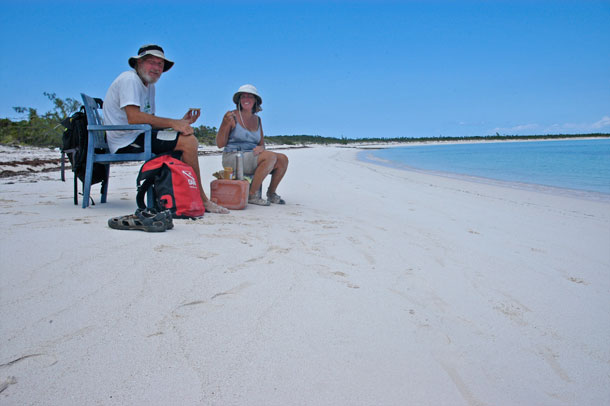 The trails final destination, a gorgeous wide beach. We didn’t have to climb up the side of any cliffs for lunch this day and were lucky enough to find one real chair to sit in. 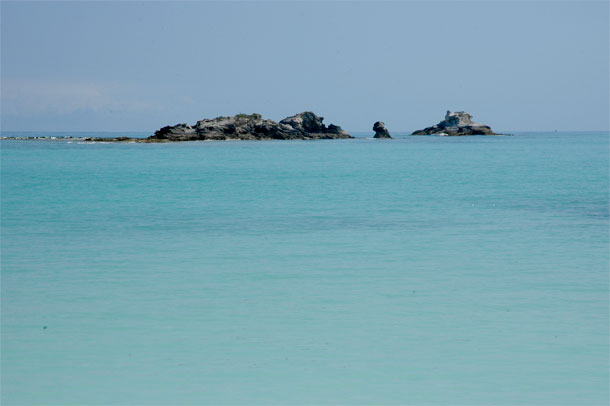 Rocks off the beach. 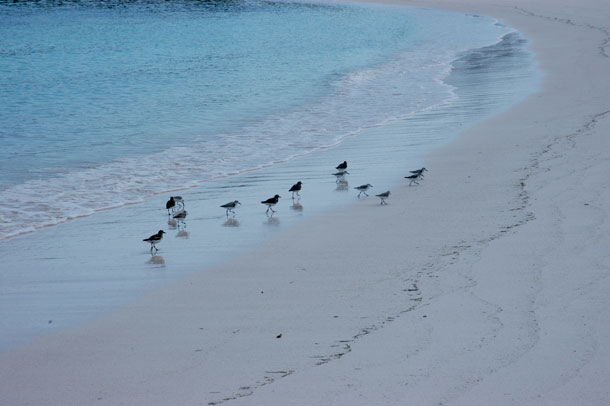 Sandpipers on the beach. 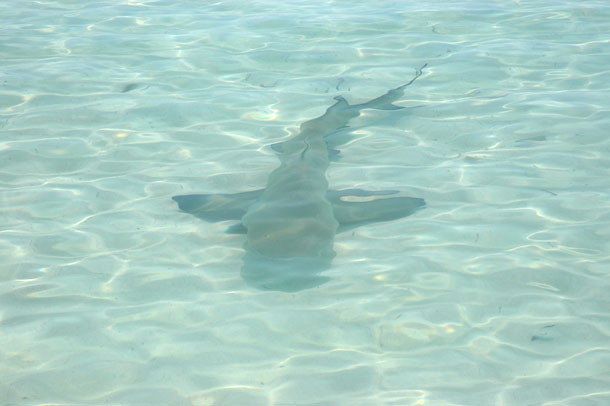 Shark! We had to wade out into the water to get this shot. No worries though, he appeared as scared of us as we were of him.

One thought on “Conception”