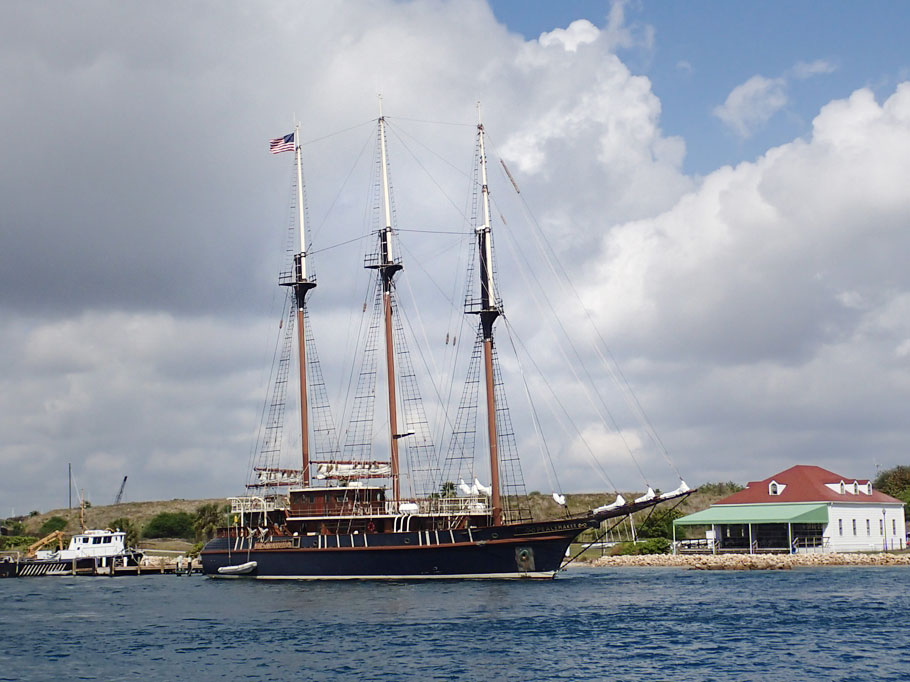 We left North Lake Worth and motored down to “Big” Lake Worth in Palm Beach in order to go through the inlet to macerate. On our way we saw The Tallship Peacemaker, visiting the Peanut Island maritime museum. The three masted boat towers 126 tall and is 150 feet long. Owned by a religious commune called the Twelve Tribes, it sails from port to port and is open for visitors to tour.

They love the water here in Miami. They sail on it, swim in it, paddle board on it, kayak on it, row on it, land their planes on it, anchor their giganto power boats on it, race their power boats on it, and water ski on it. Oh, and they jet ski on it. They LOVE to jet ski on it. They ride in packs racing each other through the anchorage, with the alpha jet skier speeding straight ahead, and the followers cutting back and forth across his wake churning up other random wakes. And us poor sailors are like the old man down the street shaking his fist and yelling at the kids to get off his lawn, except we are yelling â€œget off my water!â€ as they cut a wake next to our boats causing them to pitch, heave, and roll uncontrollably while our dinner flies off the stove down below. Yes, the water is open territory down here. Itâ€™s always a party. Sometimes smack dab in the middle of the ICW. Seriously, we had to navigate out of the waterway around a power boat anchored IN the channel.

We have been here for almost two weeks now. But we have not come for the party. It is our season of fixing things because as we recover from the delusion that we are living the life, we have realized that sailing isnâ€™t really just about waking up everyday to tropical sunrises, itâ€™s about fixing things.

We have actually gotten quite a few things ticked off our chore list, but unfortunately the list has grown since we set off from Stuart almost a month ago. It has been a bit discouraging, disheartening, and frustrating.

Our fresh water pump developed a leak. After a three-mile* trip out the Lake Worth inlet to macerate (empty the holding tank) we discovered that the macerator no longer works. One of our solar panels has stopped working. And because on most days the wind isnâ€™t enough to produce much power we have been spending our days trying to harness all the energy we can out of our other solar panel, tilting it towards the sun as it arcs through the sky and running our engine at night so we can charge our computer enough to watch a few TV â€˜sodes, hoping the refrigerator doesnâ€™t suck all of the juice out of the batteries over night.

After several tries to fix the water pump and finally hopping a couple of buses across town the pump has been replaced, the macerator is not urgent and we have solved our energy problem by filling the refrigerator full of ice and turning it off. So on the bright side, we now have fresh water on demand again, and although my vegetables may rot, I now have enough power to write this blog post.

* Three miles is the legal limit to macerate. 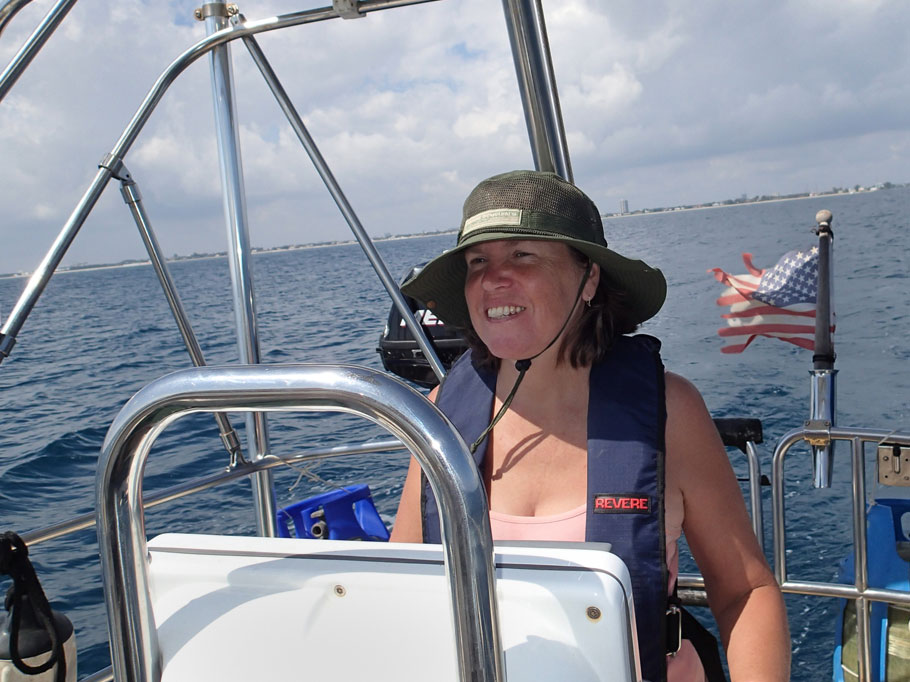 Duwan pilots the boat out the Lake Worth inlet to macerate. 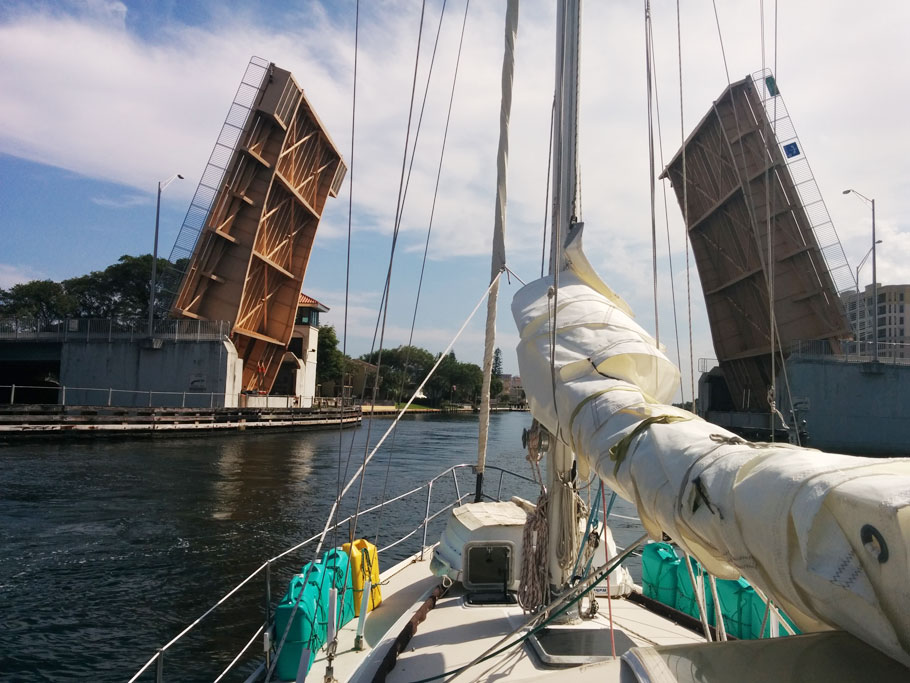 We thought we might sail on the outside (in the ocean) down to Miami, but after discovering that the macerator didn’t work, fearing other things might break on the way, and feeling disheartened we decided to motor down the ICW. Unfortunately that meant a two day trip and waiting to cross through many bascule bridges like this one. But the slow pace is not all that bad. We had a lot of time to practice our Spanish. 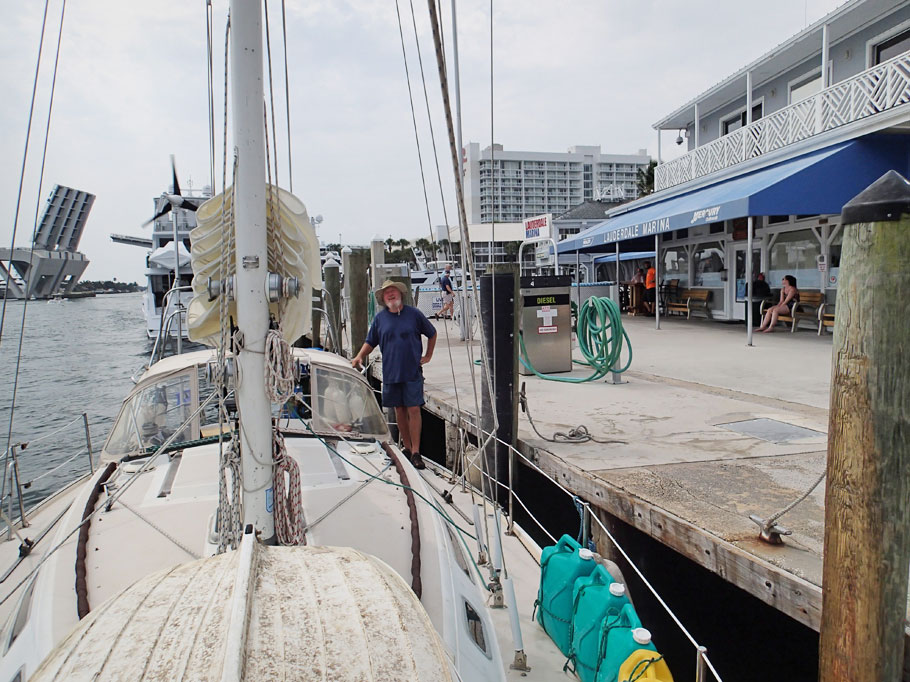 In Ft. Lauderdale we stopped for fuel, water and a pump out. 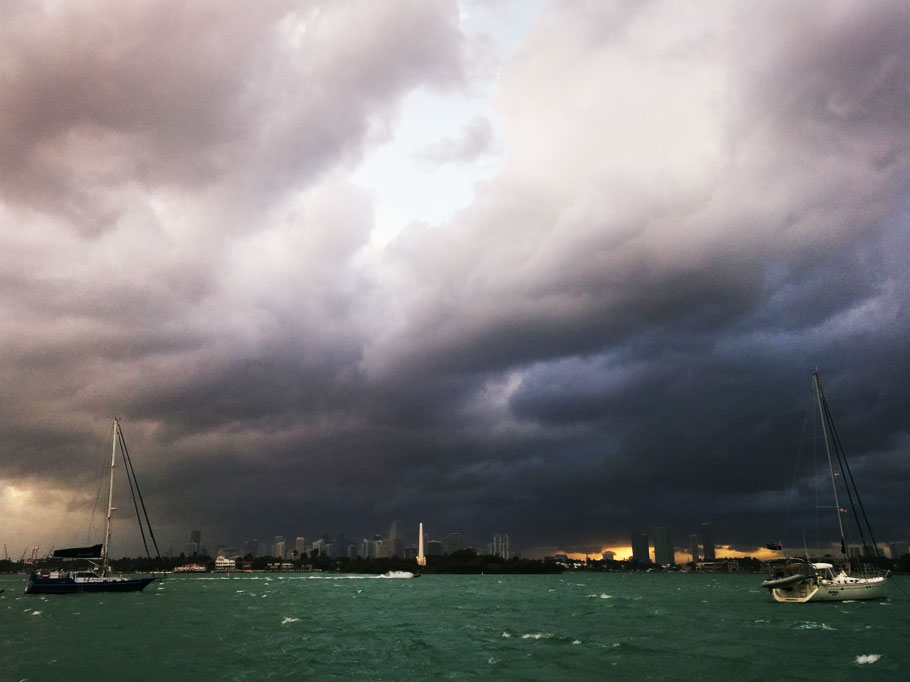 We arrived in Miami with lots of wind. Yay! We thought it would be the answer to our energy problems, but although a fierce front blew through, it calmed right back down afterwards. 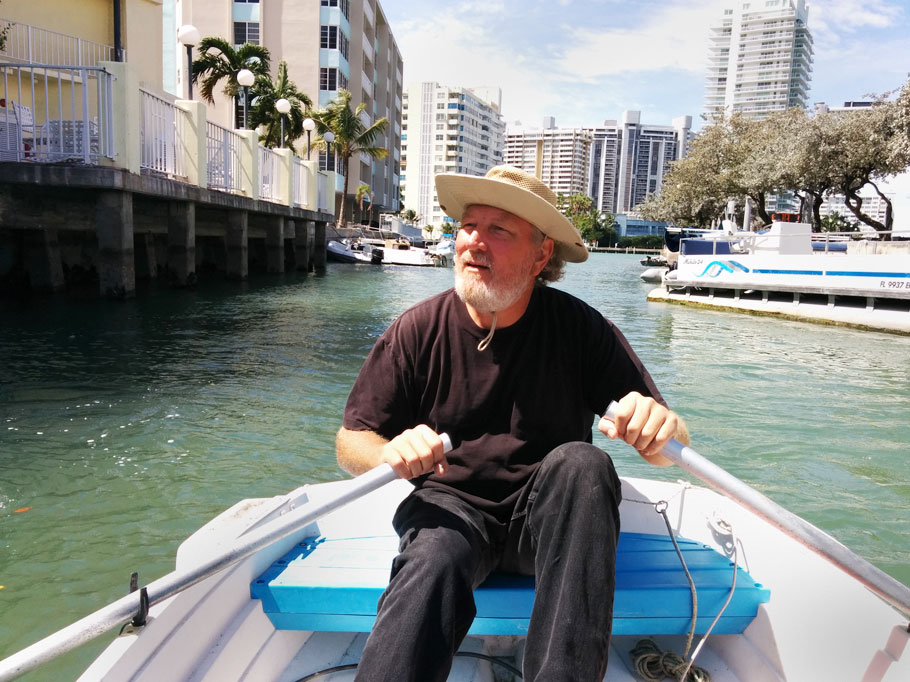 Our first stop in Miami was the South Beach Anchorage. We had never anchored in this spot before, so figuring out how to get around was interesting. Here Greg rows Fever up a canal where we can dock the dink and go ashore. 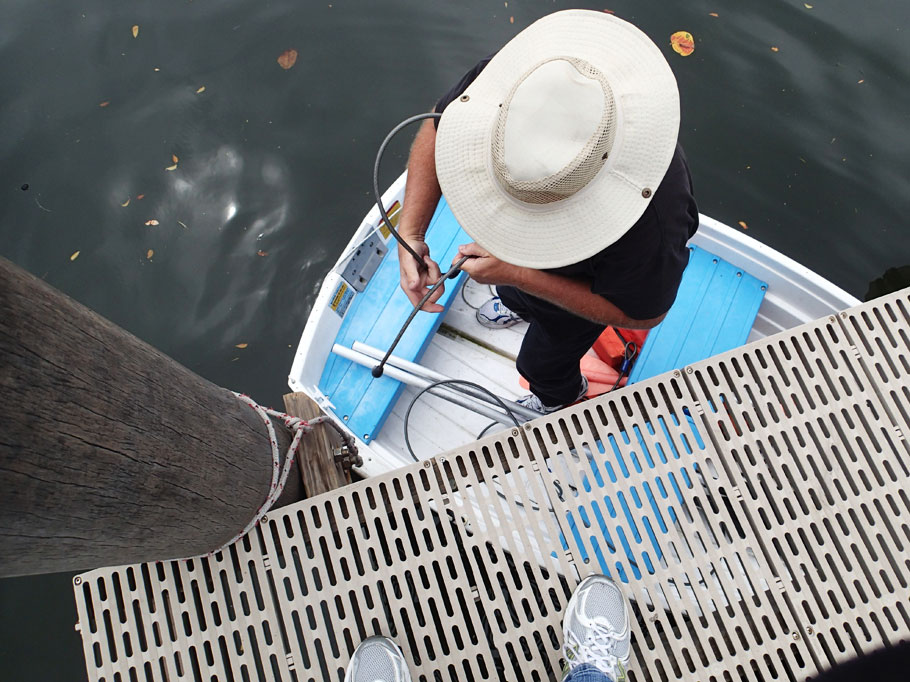 We had heard that there was a dinghy dock in the canal at the Publix, so we rowed down the canal to find it. It was very nice dock, but unfortunately there was no ladder and the dock was over 5 feet above the water at low tide. I couldn’t scale it, so Greg rowed me a little further up the canal where there was a pipe I could climb on and up over the canal wall (to the surprise of some people walking down the street). Here you can see how far down it is to the boat from the dock. 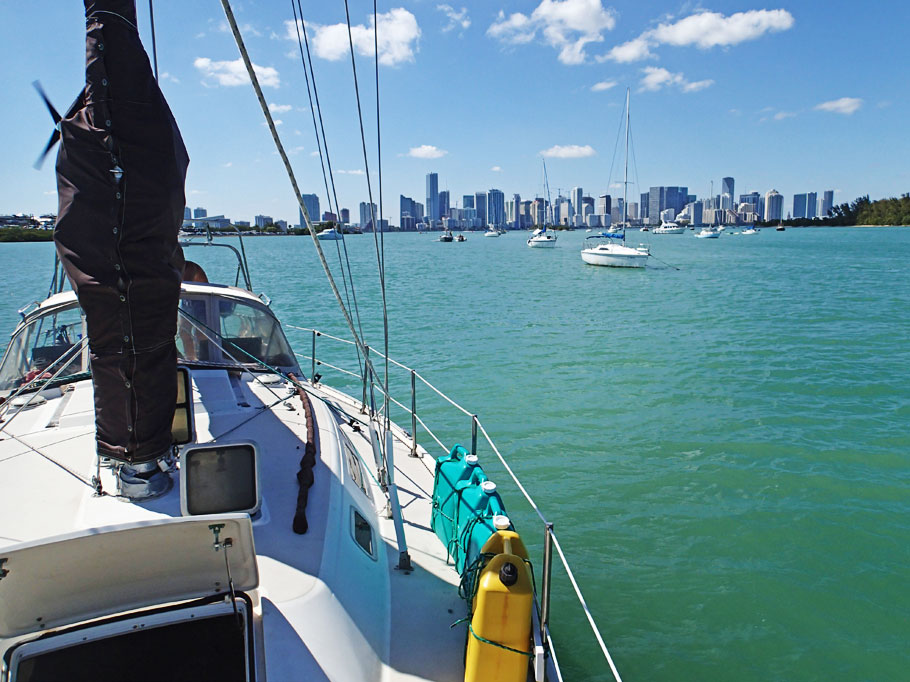 After a few days in South Beach we moved to the Marine Stadium anchorage where Greg caught a bus to buy our new water pump. 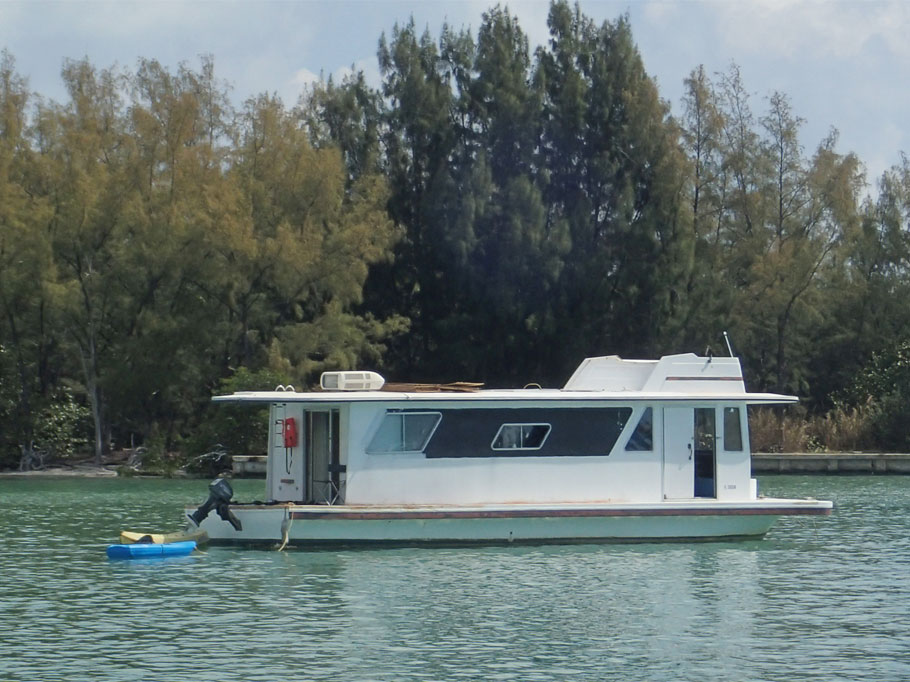 Although Marine Stadium anchorage doesn’t have the kind of shore access and facilities as the South Beach anchorage (no Publix or any other place to get supplies without a bus ride), it is quite and calm and popular with liveaboards. A couple of young kids live in this house boat. 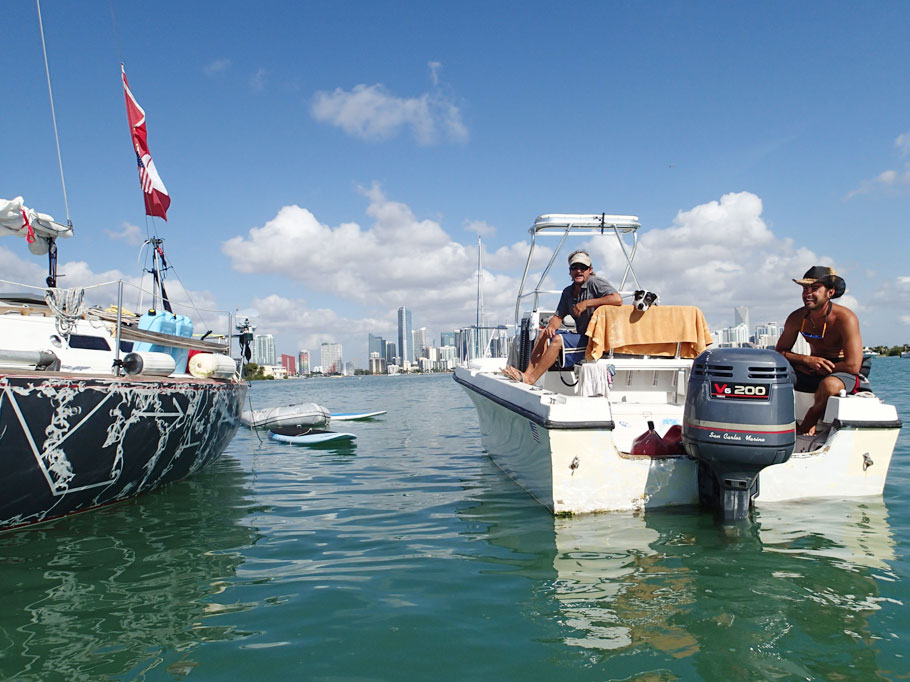 Marine Stadium also comes with its own unofficial Mayor. James (on the left) and his dog Hurley actually live on land in Miami, but spend the winters in their catamaran the anchorage. James has shore access with his power boat and a truck. He makes grocery, hardware and laundry runs for the local live-aboards and watches our for the many unoccupied boats that drag anchor when it storms. 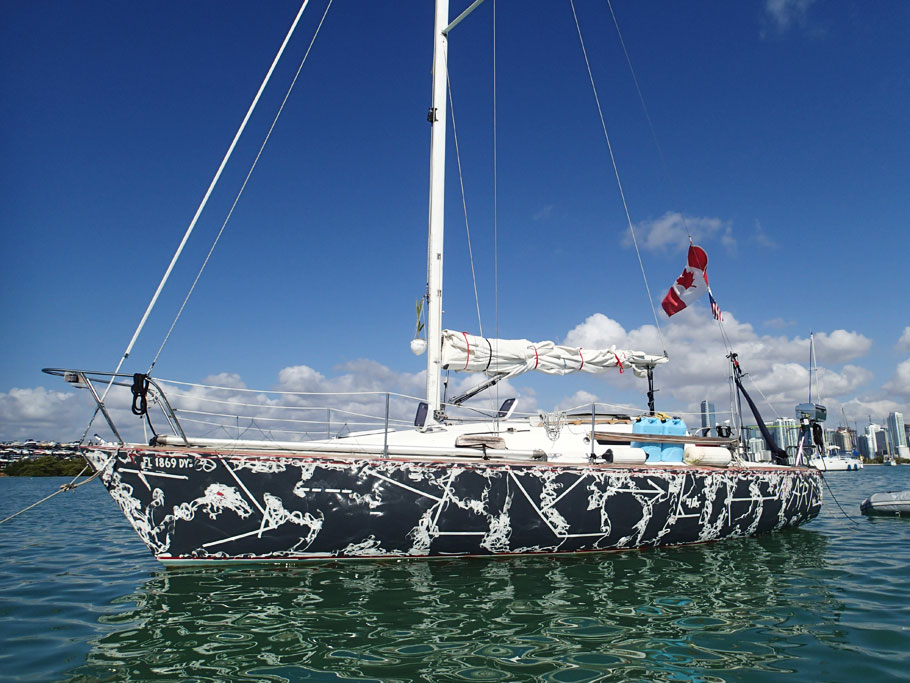 We watched this boat being painted from the water one morning. The owner says his new paint job hides all the dings. 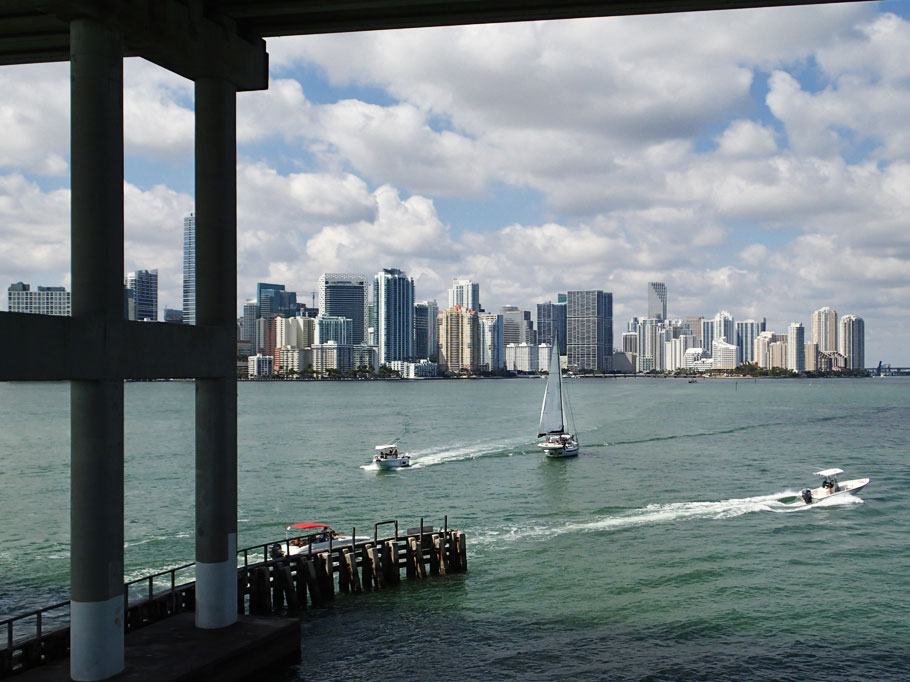 It hasn’t been all work. One day we walked along the fishing pier under the Rickenbacker Causeway. We saw this sailboat sailing under the bridge and into the channel in Miami. 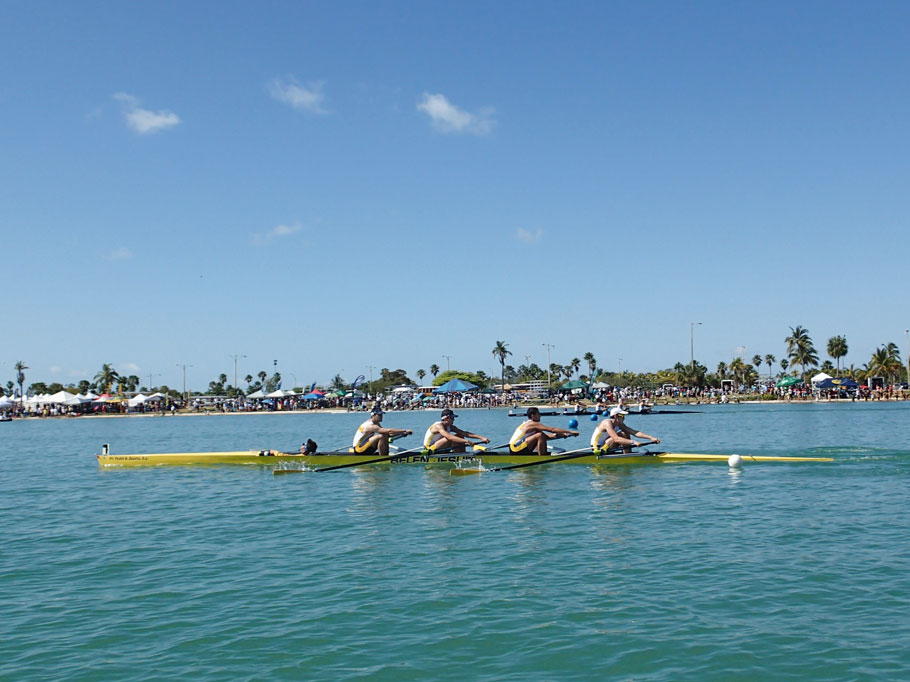 On the weekend they had a highschool rowing competition in Marine Stadium. 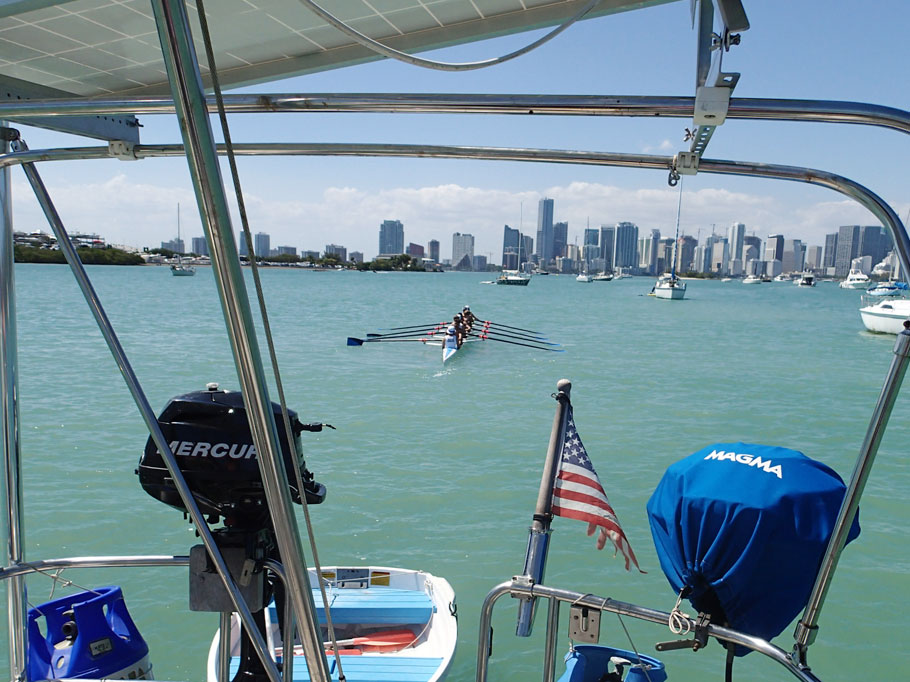 We will take rowers, instead of Jet Skis, zipping by Blue Wing anytime. 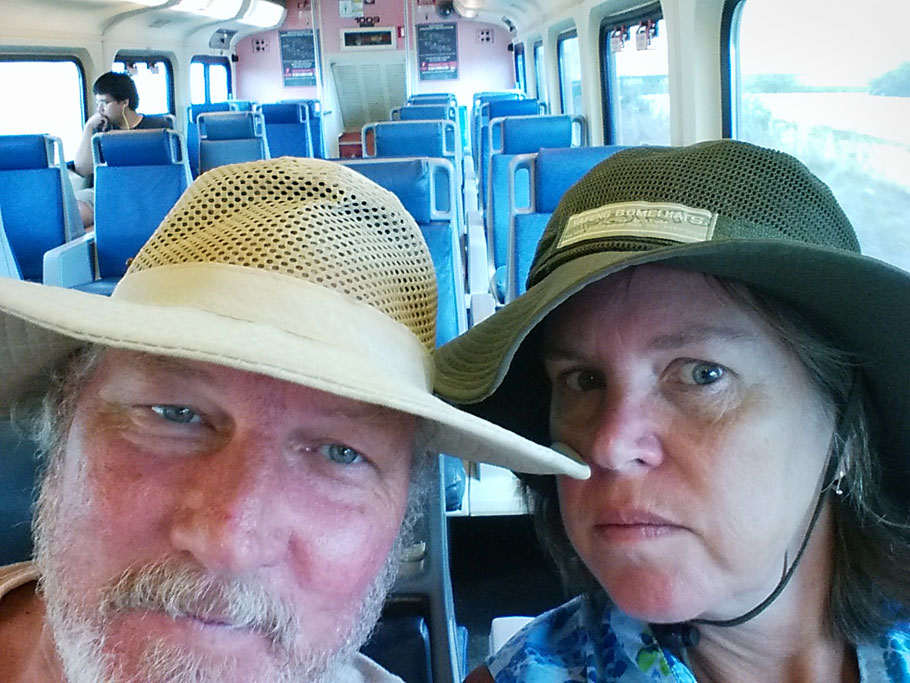 Our broken solar panel was still under warranty so we decided to return it to the place where we bought it in Fort Lauderdale. We moved the boat back to the South Beach anchorage and took an all day public transportation journey. Round trip we ended up taking 5 buses and 2 trains. After not being able to decide how we needed to replace the panel we came back with a store credit and time to develop a new solar plan for Blue Wing. Here we are on one of our train rides. 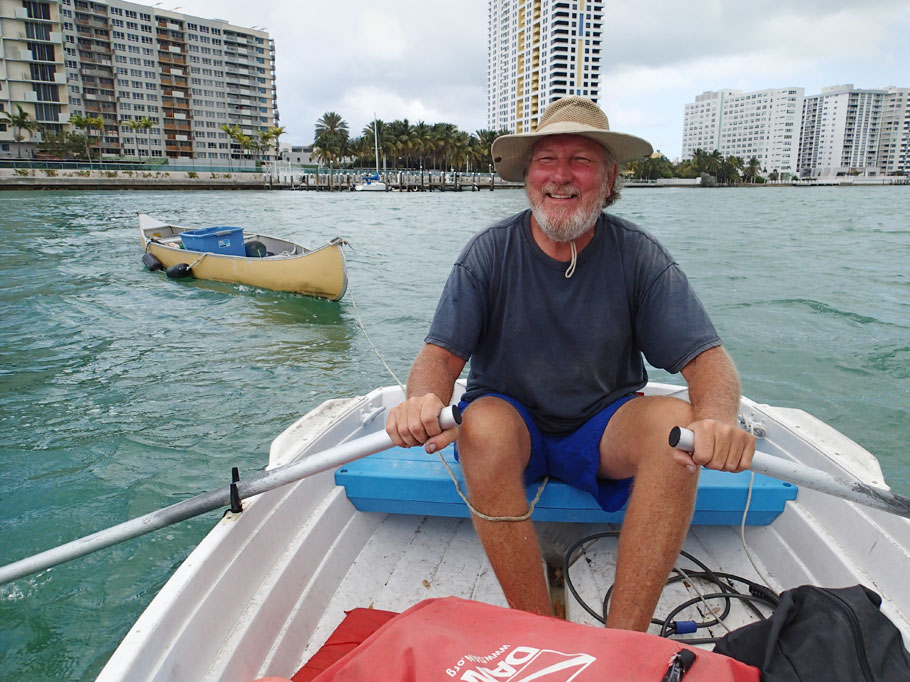 People often offer to tow our little rowing dink. Here’s a switch. We saw this canoe adrift, rescued it and found the owner. 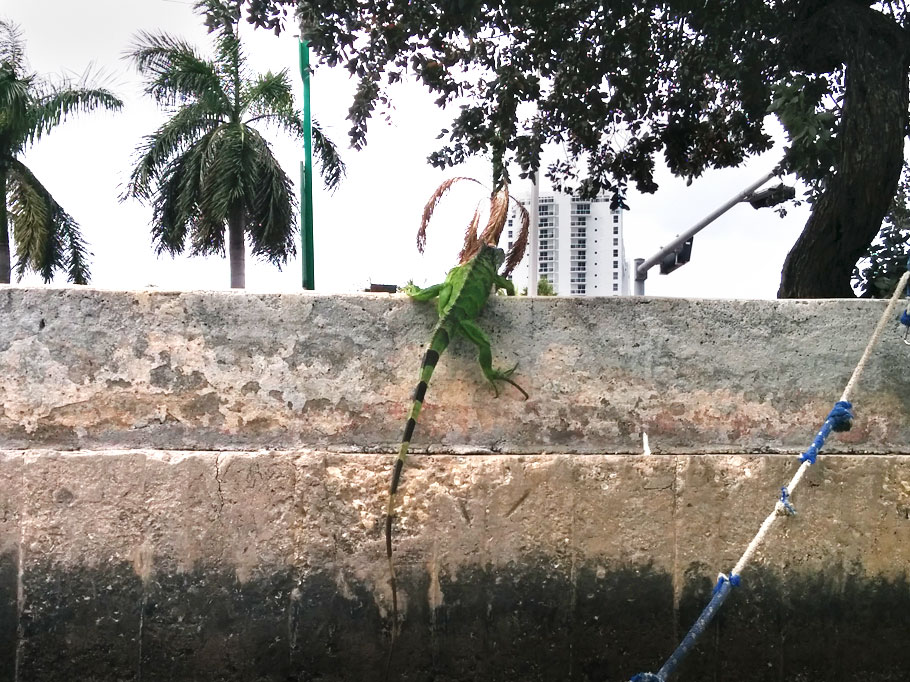 I’m not the only one climbing up the wall of the canal in South Beach. 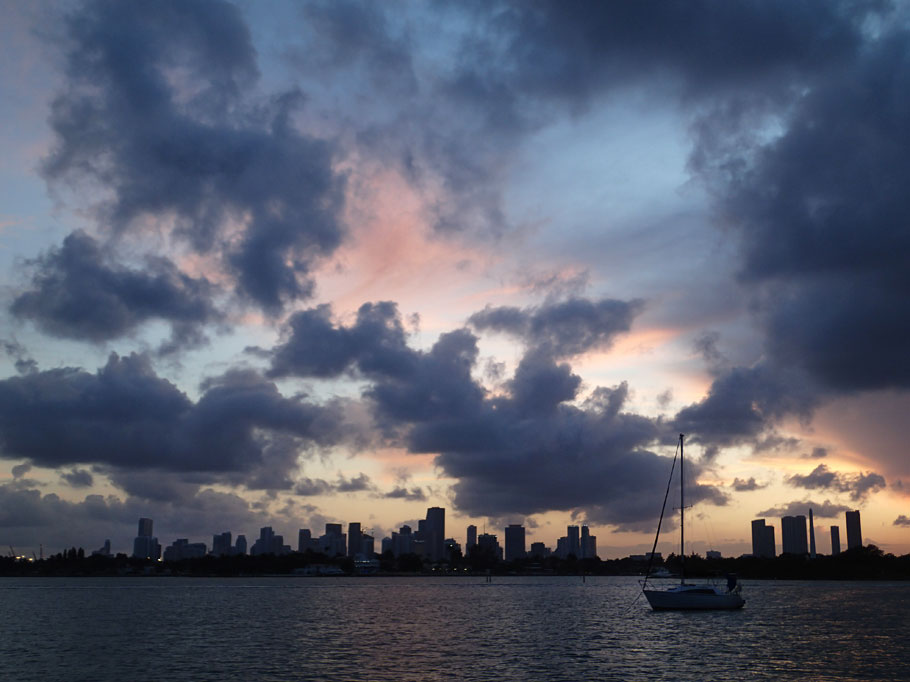