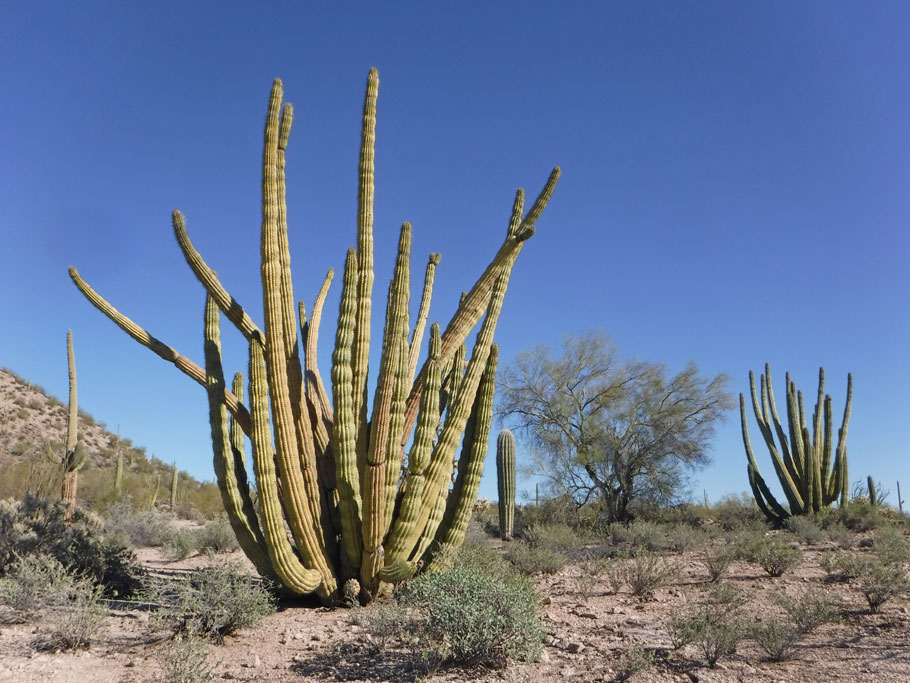 The Organ Pipe cacti are like us. They don’t like cold weather. We decided to head south to check them out at the Organ Pipe National Monument in Southern Arizona.

We decided to break our pattern and spend money to stay in the park’s campground. There was a nighttime ranger talk we wanted to attend. And the campground boasted of solar showers. The showers were the warmest part of our stay, with the water temps maxing out at around 60 degrees midday. Organ Pipe was definitely worth the visit, though.

We also spent a little time in the town of Ajo, just north of organ pipe. (Ajo is Spanish for garlic.) Enjoy the pictures of this special town. 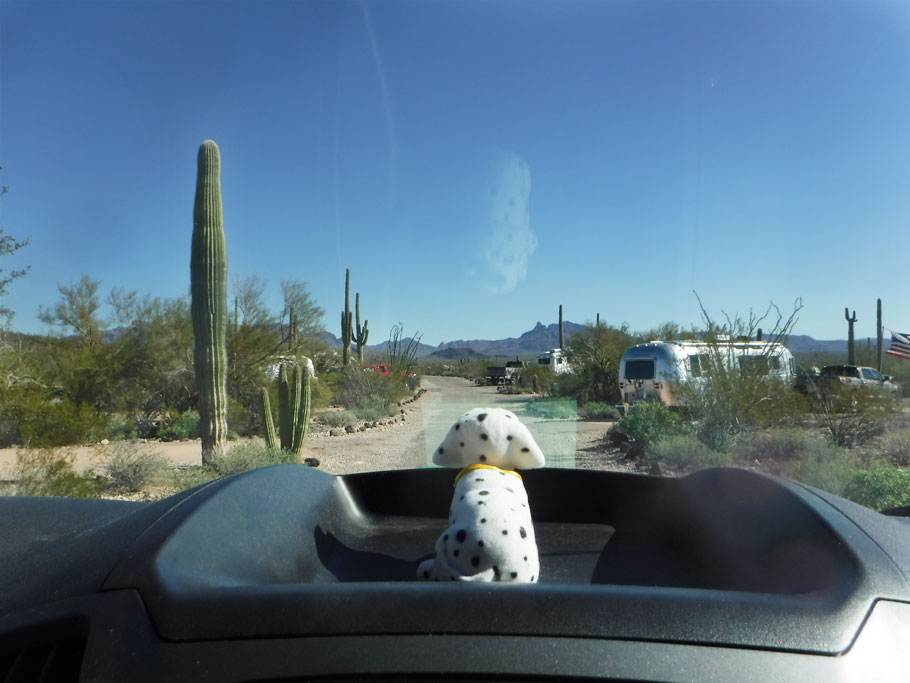 We pull into the campground. Bob eagerly anticipates his hot shower. Instead of having water heated by solar powered heaters, though, his water is heated in black pipes on the roof exposed to the cold wind. Bob hangs his head in disappointment. 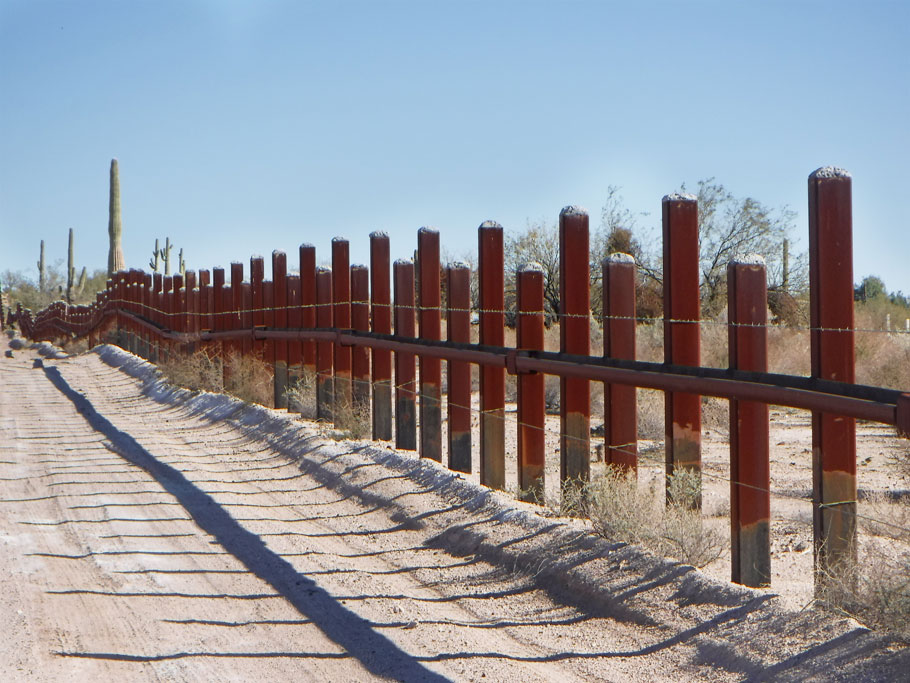 We drove down South Puerto Blanco Drive to attend a ranger led hike in Quitobaquito. The road runs along the Mexican border. According to our ranger, the park service put up this fence. Not to prevent illegal immigration or drug trafficking, but to deter the frequent cross-border car chases caused by those activities. I could easily get past the fence. So can all the wildlife that needs to go back and forth across the border.

Quitobaquito. This fresh water pond in the desert is important to wildlife, and one of the few places the endangered pupfish can live. The ranger is convinced that the team sent to survey and establish the border accidentally bumped their transit, making sure this pond landed in the US, not Mexico. 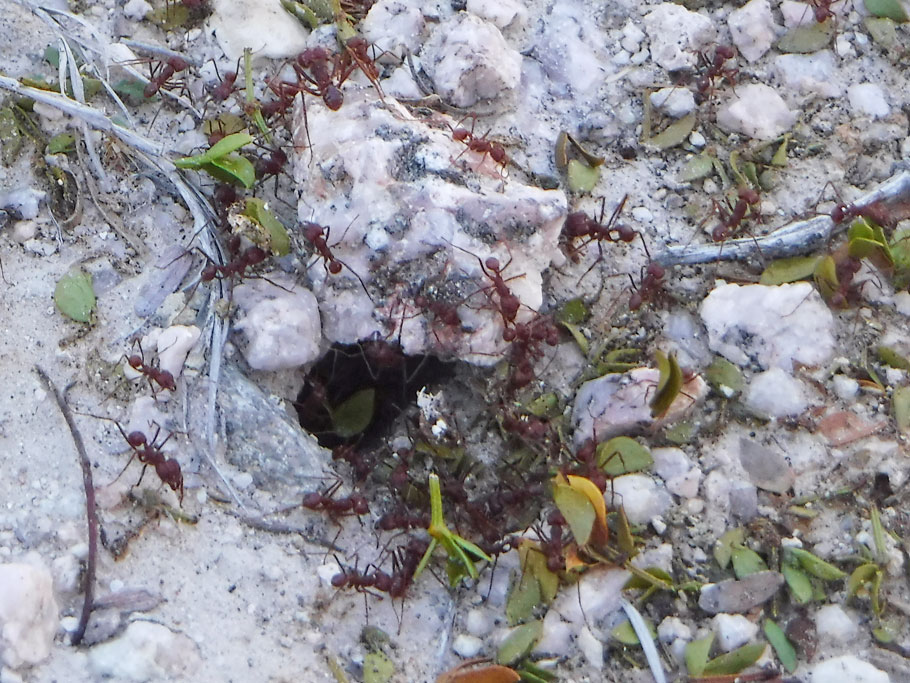 Harvester Ants carrying leaves into their hole near Quitobaquito.

Grave of a former Quitobaquito inhabitant. Another family lived here at Quitobaquito after the park was established. They lived out their lives ranching here. A gate was put into the border fence, so their cattle could cross as they had for years. Their houses are gone now.

This area is the northern end of the Organ Pipe’s range. They are more plentiful in the Mexican part of the Sonoran Desert. 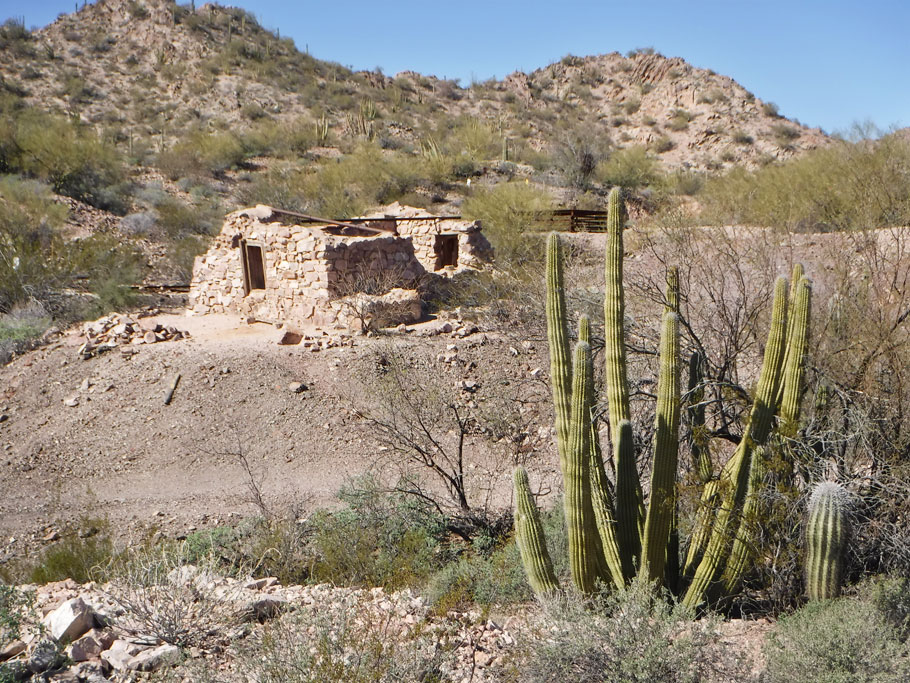 We also hiked out to the old Victoria Mine. 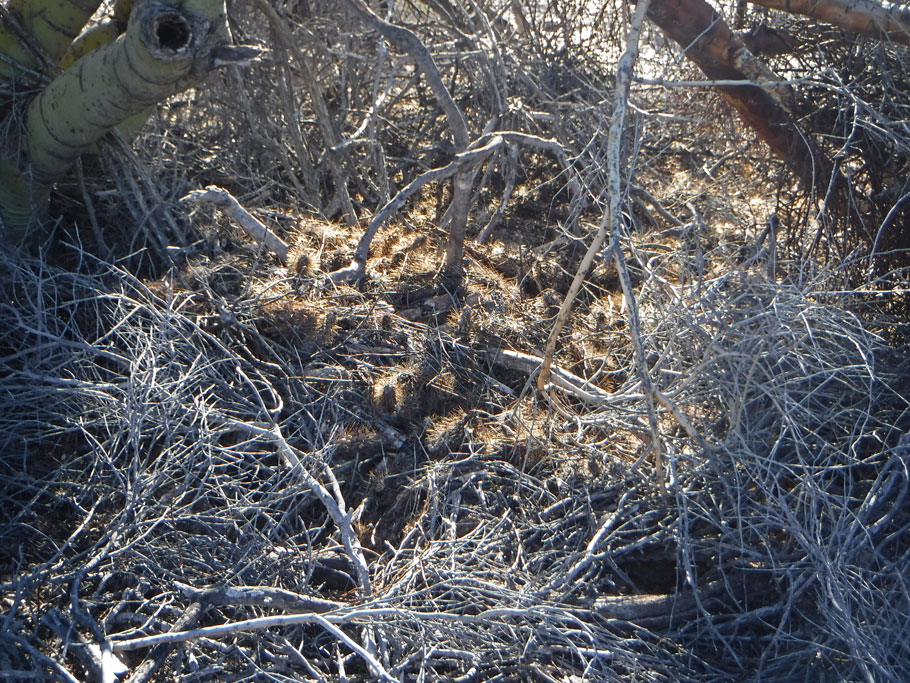 We spotted this packrat midden on our ranger led hike from Red Tanks Tinaja. Nests are handed down from mother to daughter. The riff-raff is all held together with the highly adhesive packrat pee. Some middens are thousands of years old. 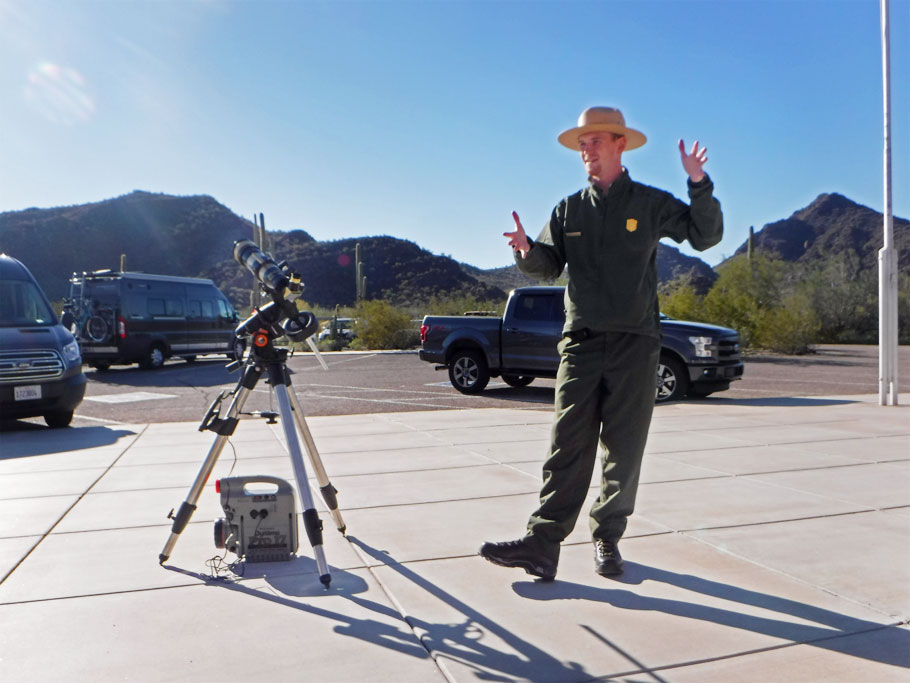 This is one of the rangers that led our night sky talk. At night we looked through scopes at Mars and the Orion Nebula, and spotted constellations. Today we are looking at the sun through filters. The ranger talks are always informative.

Ajo was built as a mining “company” town. The mining industry had a history of labor disputes. This town was designed to be a place where workers would enjoy living. The train station/visitor center faces this shop-lined plaza.

Two churches across from the town plaza. These are spots on Ajo’s self-guided walking tour. 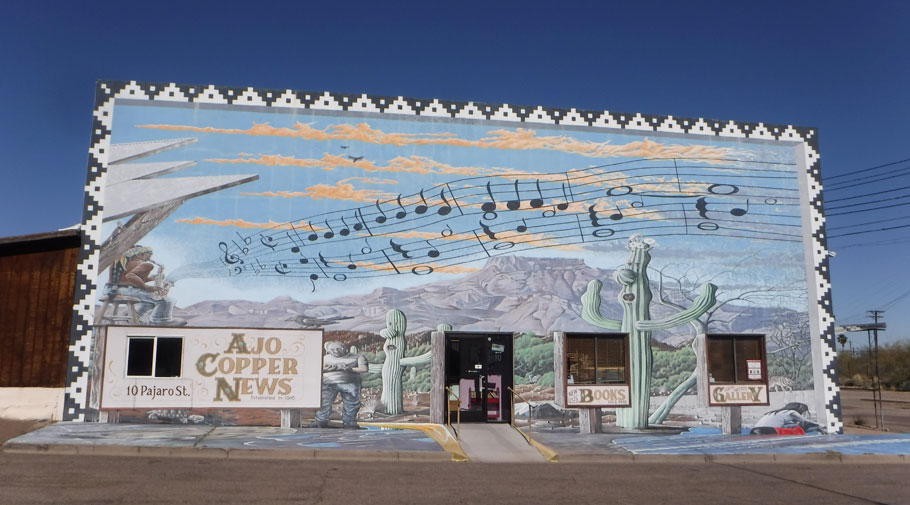 The old Ajo Copper Newspaper building is now a bookstore. I’m pretty sure the music score is for ‘Ghost Riders in the Sky’. 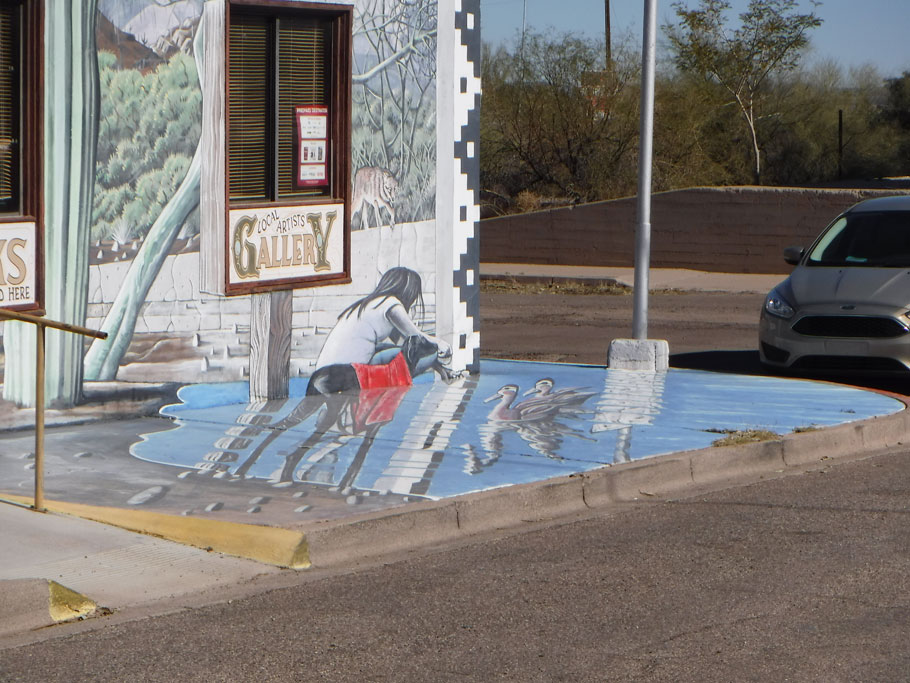 The mural is meant to be viewed from an angle. It spills onto the sidewalk. 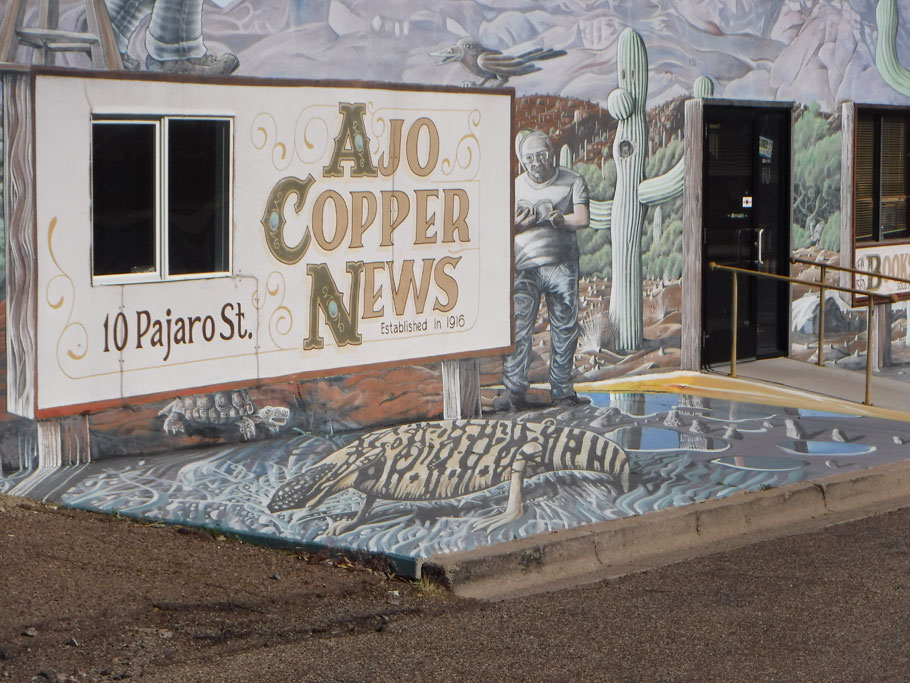 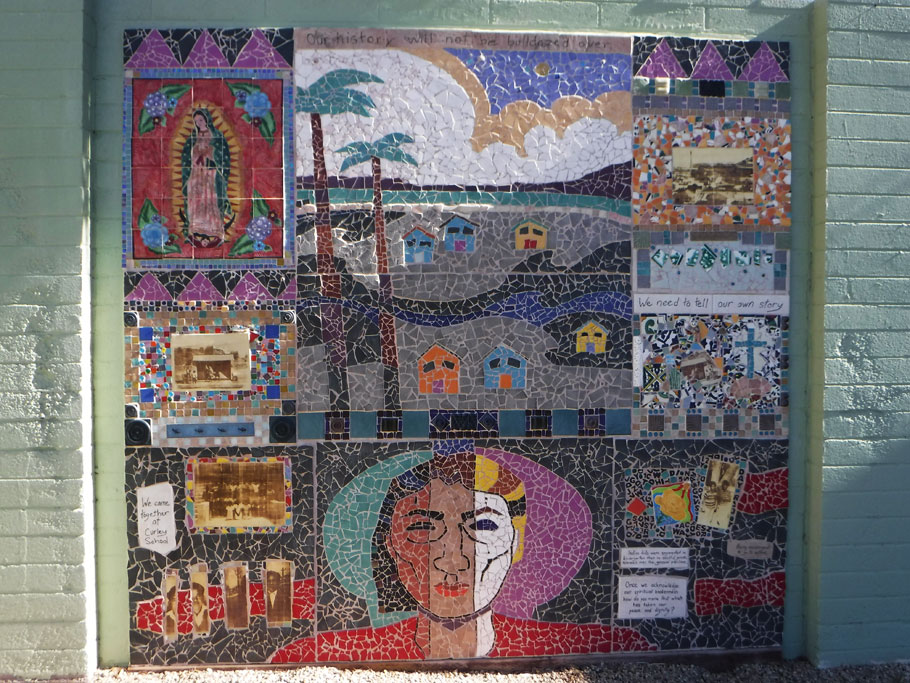 Tile mural in a park on the walking tour. There were several interesting displays in this park about the culture of the mining community. 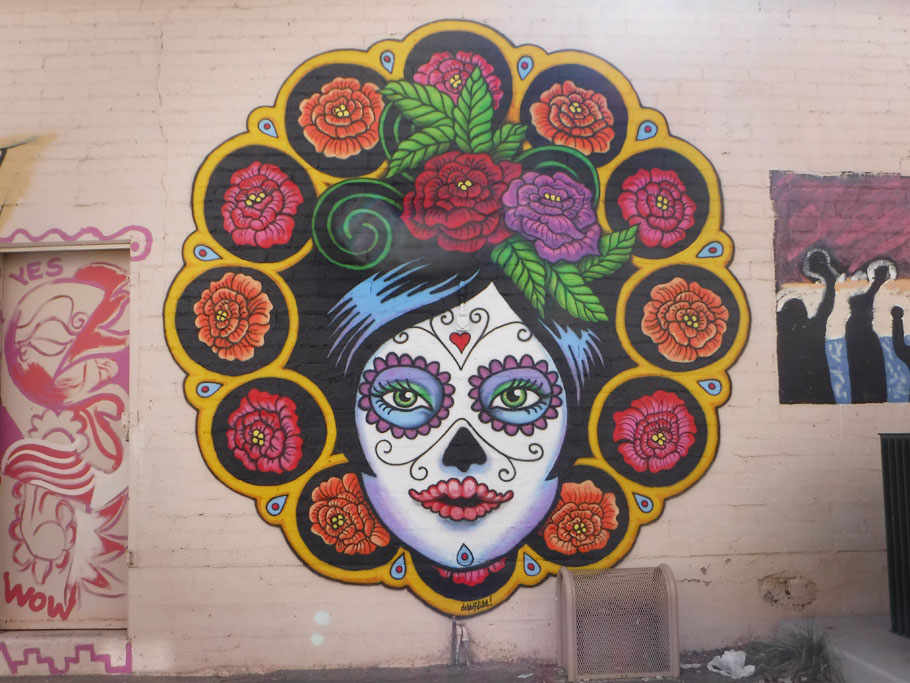 We accidentally spotted this alley behind the plaza. The walls are covered with murals. Here’s a lively Day of the Dead mask. 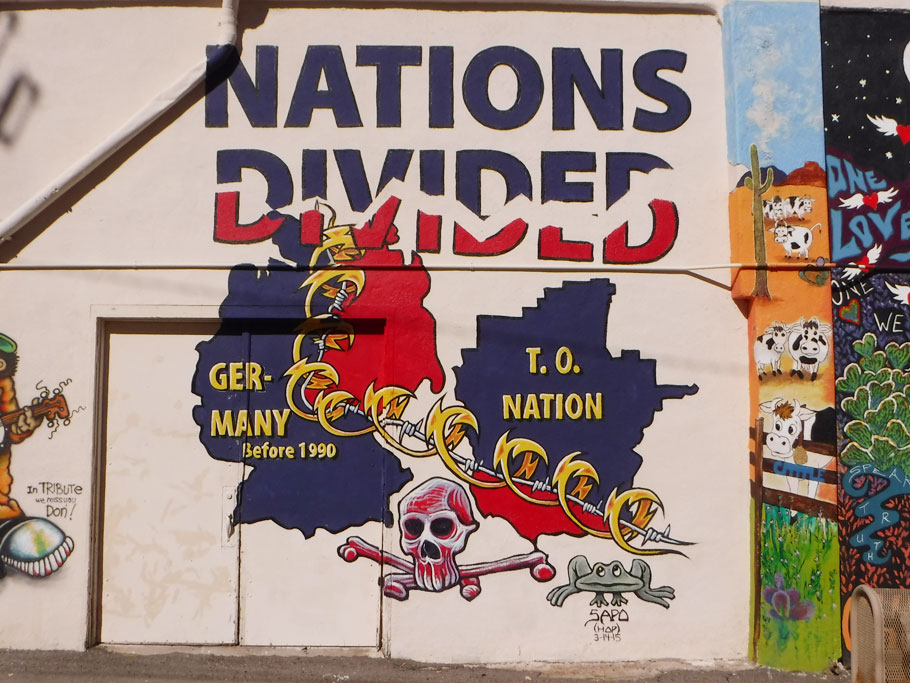 T.O. Nation refers to the Tohono O’odham people. For thousands of years, before a Mexican/US border was established, they freely traveled the entire Sonoran Desert. 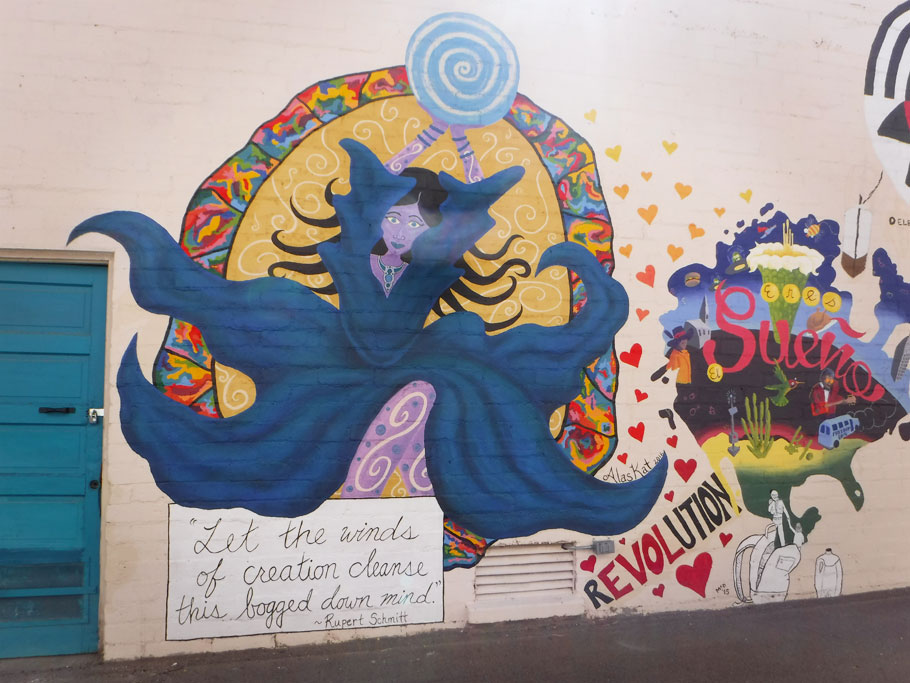 Another alley mural. We talked with a youth here who told us the murals were done by a local artist guild. He grew up in Ajo and works now as a school bus driver on the T.O reservation. He is heading to the east coast for the first time this summer.

View from the scenic loop drive around Ajo. There is BLM camping on Ajo’s west side, but we didn’t stay there. 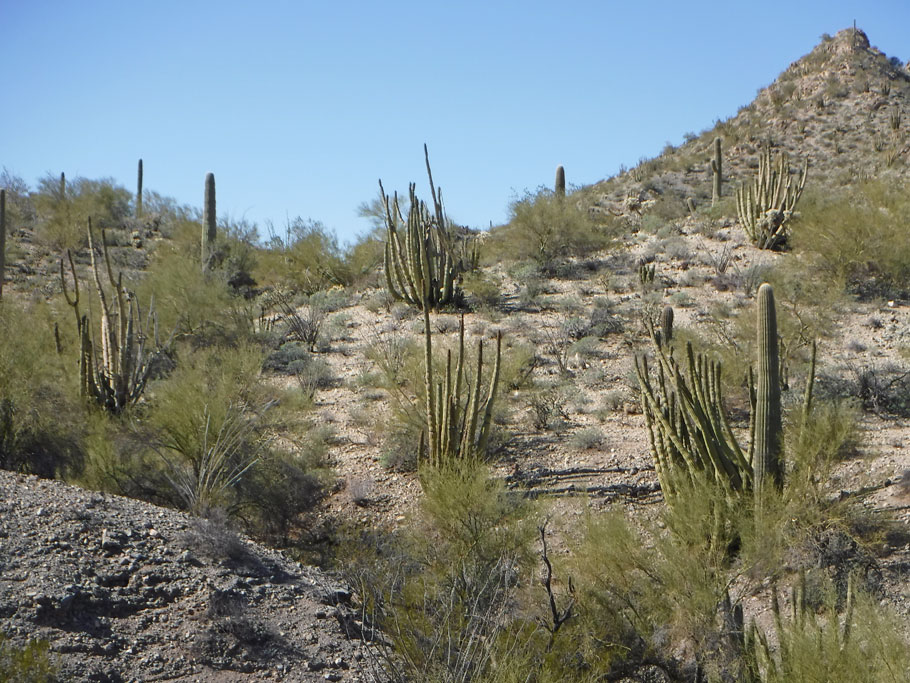 A patch of Organ Pipe cacti near Ajo. 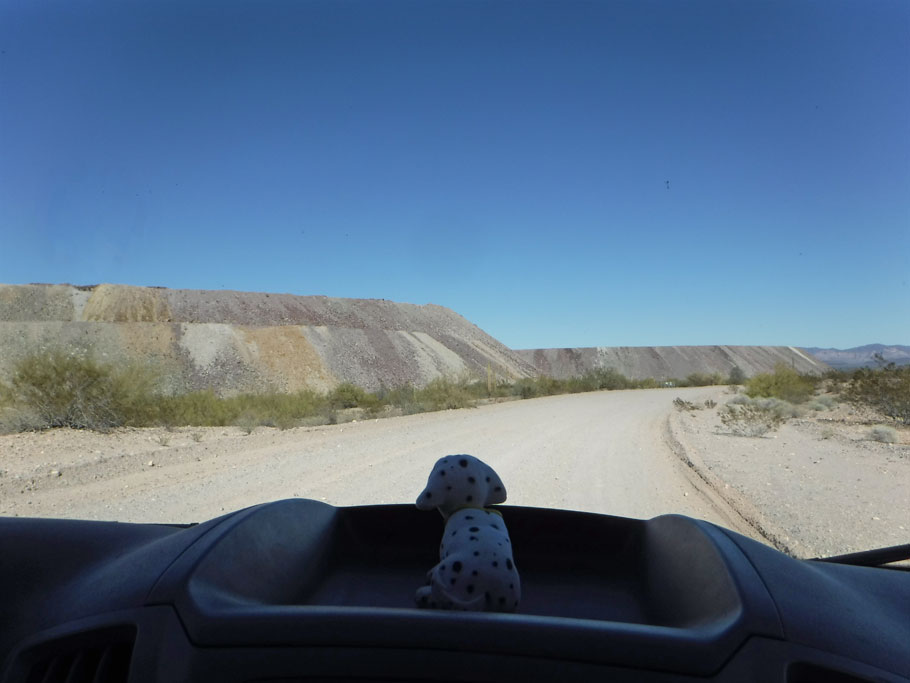 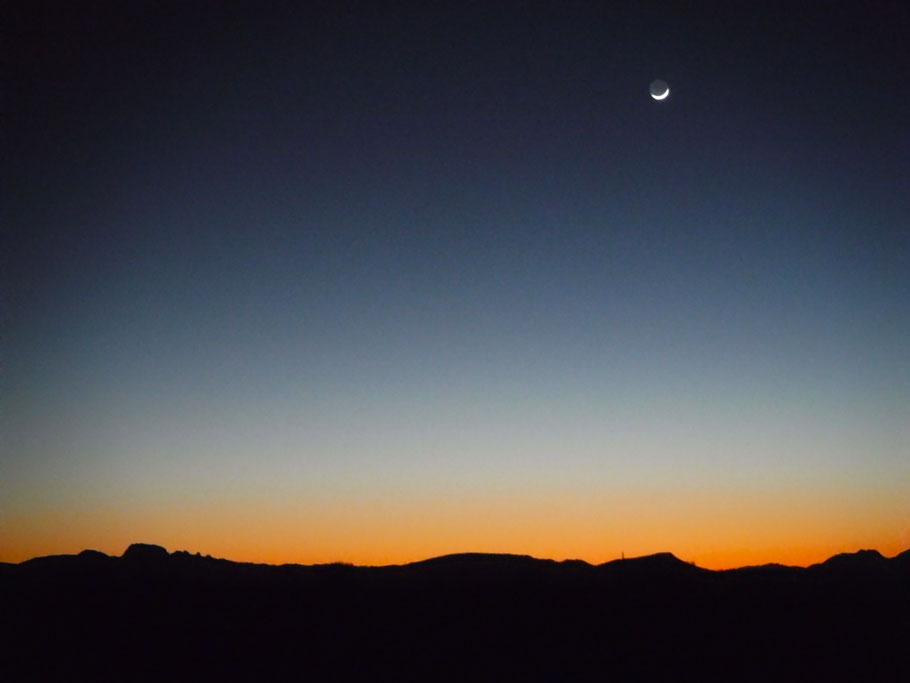