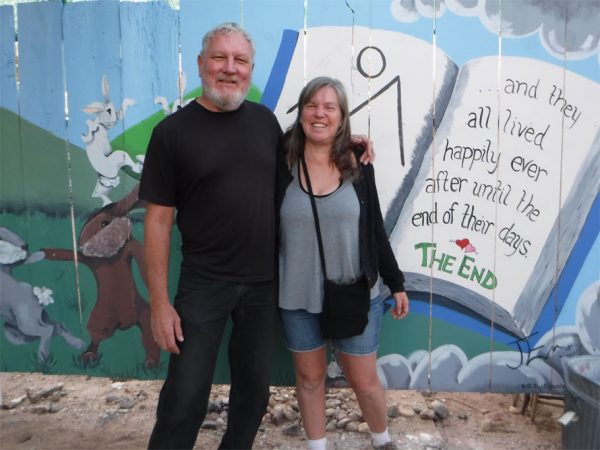 Greg and Duwan wandering around in Tucson at the Valley of the Moon.

We were tired from traveling, it was cold, and getting colder as the sun set, but we waited patiently, sitting outside, our gazed fixed on the southwest until darkness took over and we saw the first flicker of the first Marfa Light. Mysterious glowing pin points danced, morphed, and faded in and out in the distance. We peered at them with our binoculars. Were they ghosts or UFOs or some odd atmospheric phenomenon? No one knows.

I knew nothing about the Marfa Lights until I started looking for a place for us to spend the night after we left Big Bend National Park. On one of my online boondocking resources I clicked a link for a good spot a little less than halfway between Big Bend and Tucson. It was a rest area with a odd curiosity. It sounded like some place I wanted to go.

The rest of the trip to Tucson was sort of off the cuff like that – as is often the case, when searching for places just to sleep, random posts on social media, or conversations with people we cross paths with start to influence our direction and the journey starts to feel more like a “wander.”

In Tucson, after over 2200 miles and two weeks of meandering through a battlefield, parading through the streets of New Orleans, holding a baby alligator, rowing across the Rio Grande to Mexico, hiking through Big Bend National Park, gazing at the Marfa Lights, and learning a bit of history about our country’s southern border, we finally made our destination and wandered into my friend, Deanna’s driveway.

Right now, this very minute, we are typing up this blog in the Indio Law Library. The very nice library we had been going to is in the midst of an arts festival today, so instead of battling for a parking space, we decided to check out the Law Library. It is really super quiet here. Our blogging is almost caught up (yes!) and our tour of libraries will be coming to an end soon as we head out on a new adventure (woo hoo!). 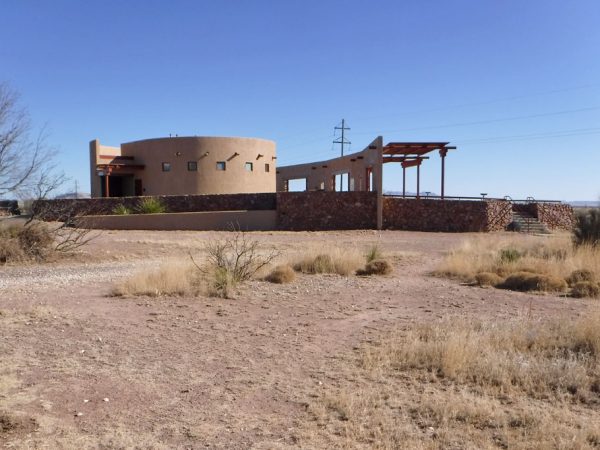 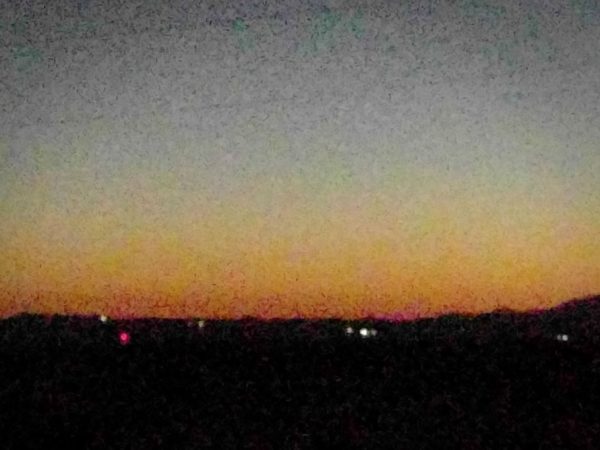 The Marfa lights glow in the distance. The first recorded report of the lights being seen was by Robert Reed Ellison who was herding cattle in March 1883. He wondered if they were if they were Apache campfires. But Apache Indians believed they were stars dropping to the earth. Retired aerospace engineer, James Bunnell, has studied the lights and has written a book about them, but still no definitive explanation has been found. 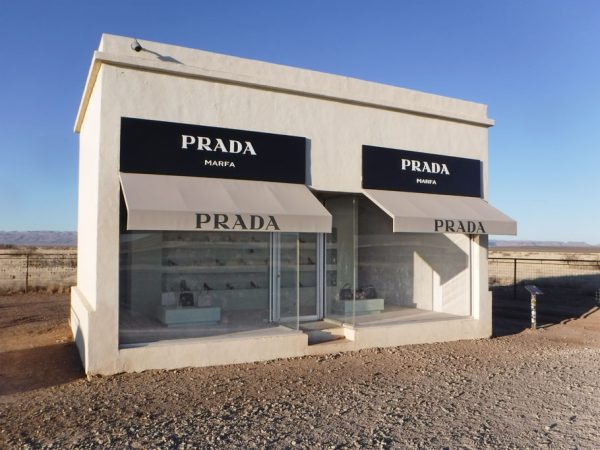 Coincidentally I saw a post on one of my Facebook groups about the Marfa Lights just as we were driving there. The poster told me not to miss the Marfa Prada as we were leaving town, heading west. And there it was, all alone in the desert on the side of the road, full of bags and purses no one will ever buy. 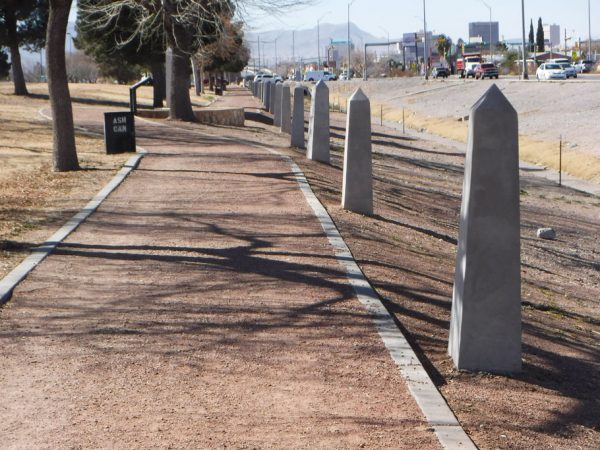 On the recommendation of a park ranger at Big Bend, we stopped in El Paso at the Chamizal National Memorial, where these obelisks mark the old border. In 1864 the Rio Grande shifted here, leaving a large chunk of disputed land, whose population was in limbo. Almost century later, the Kennedy administration brokered a deal with Mexico. The river would be diverted through the center of the land. 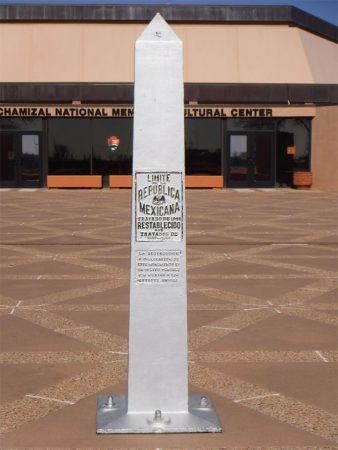 One of the border markers with Spanish on the Mexican side (and Engllish on the US side). A ranger told us that residents who were moved out of the river’s new path got to choose their country. Many went to downtown El Paso, and many went south. 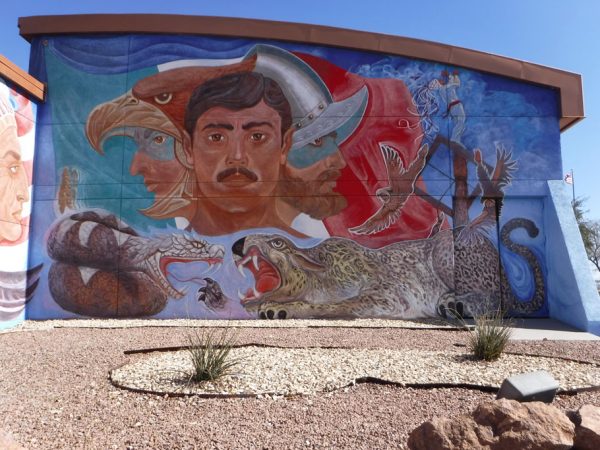 Mural at the visitor center showing indigenous and conquistador roots of Mexico.

Mural capturing the varied local cultures. JFK, who was asassinated before the plan was realized, looks down as Presidents Johnson and Ordaz shake hands. 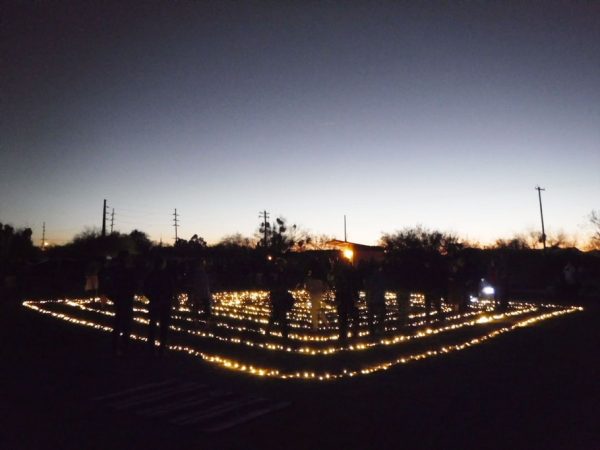 While we were in Tucson we saw the Super Blue Blood Moon and attended the Luminous Full Blue Moon Labyrinth Walk and watched as participants did a meditative walk through the lighted labyrinth. 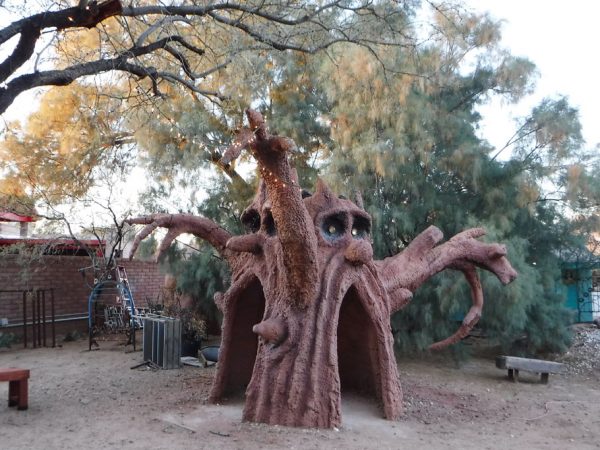 Tree at Valley of the Moon. We happened upon this place during a walk through a Tucson neighborhood one afternoon. The place was closed, but it looked interesting, so we made a point to return the First Saturday Campfire and Sing-along. 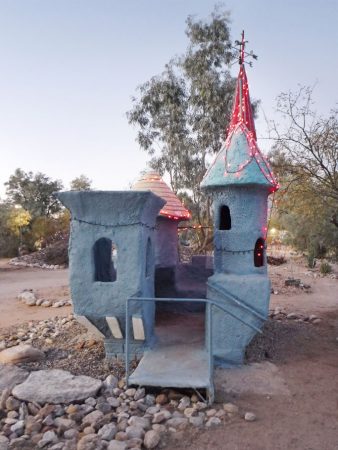 George Phar Legler built the Valley of the Moon park in 1923 on private land as a place where visitors could wander freely and have picnics. It is on the National Register of Historic Places and is an official Tuscon Historic Landmark. The history of the place is fascinating. If you like to know more check out this link 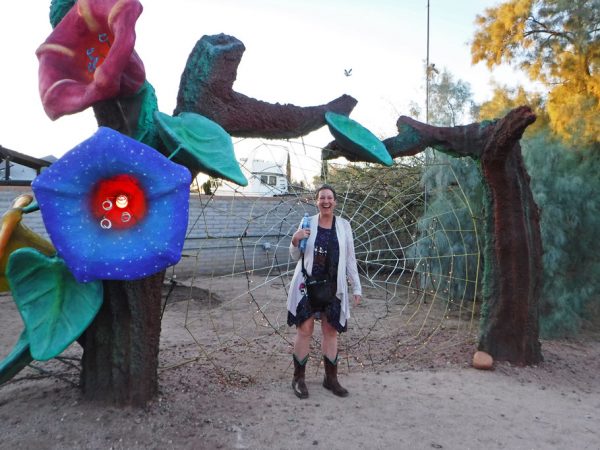 Deanna at the Valley of the Moon. It is alway great to connect with friends. Besides hanging with Deanna, we got to see Cabbagetown friends Julie and Jason who had just moved to Tucson. More reasons to visit Tucson more often. 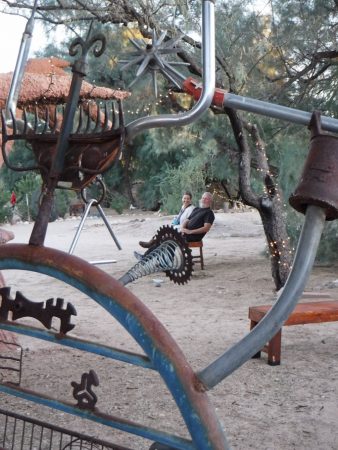 Hanging out in the park. 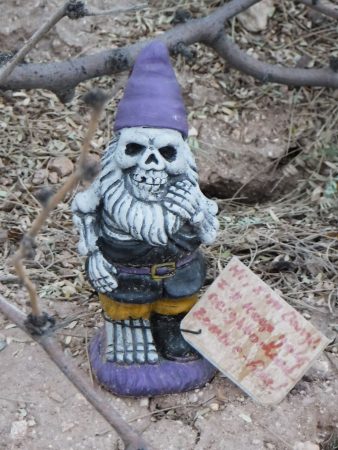 There was a whole gardern walk way of gnomes. Some with stories like this guy. “Hi I’m George. I’ll keep your neighborhood Zombie free.” 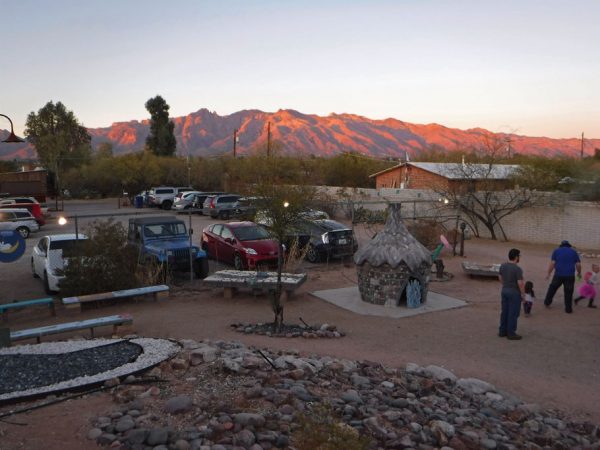 The Catalina Mountains. Every sunset is a beauty in Tucson.

4 thoughts on “Wandering to Tucson”