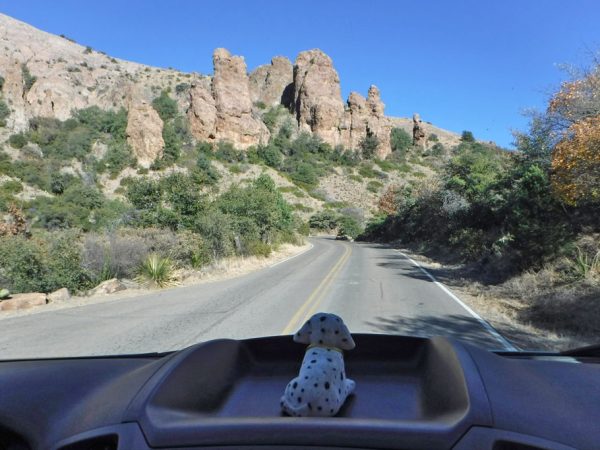 Bob checks out the volcanic Chisos mountains near the center of Big Bend National Park. The whole mountain range is within the park.

On our drive from New Orleans to Tucson we chatted with our friend Deanna to see if she was ready to “receive” us. We were welcome, of course, but she was juggling some priorities, and it would be better if we waited a few days more. Sounded like a good time to visit Big Bend National Park.

We drove on to Fort Stockton, TX, and spent the night in a Walmart parking lot, then drove southwest. The landscape started changing around Marathon. The grassland and juniper gave way to creosote bushes and prickly pear cacti. We were in the Chihuahuan Desert.

On the way we discussed whether to pay the entrance fee or get a more expensive annual park pass. The U.S. government had just shut down for almost two days. Another budget showdown was on the horizon. Who knows if the parks will be open all winter? Optimists, we decided to go for the annual pass.

We drove into the north entrance and on to center of the park to make camping arrangements. At the Panther Junction visitor center you can opt to use a campground, or spend $12 to spend up to two weeks in primitive campsites. We did the latter, and reserved sites at two locations. (The park is big. We should have reserved more sites.)

The Southern border of Big Bend is a big bend in the Rio Grande River. As big as the park is, there is almost three times as much protected land on the Mexican side. The river is an integral part of a unique protected ecosystem. A U.S. border crossing has been built at Rio Grande Village, across from the Mexican town of Boquillas del Carmen, to allow researchers from both sides of the border to cross more easily.

The first night we stayed at a site in Paint Gap, near the center of the park. We stayed the next three nights at the Candelilla site near the east edge of the park. The primitive sites are widely spaced, giving you the feeling you have the park to yourself.

This is a place of contrasts. In the east the terrain slopes gently down to the river, where the grassy banks show the high water line. In the center is the volcanic Chisos Mountain range. And in the west the river has cut through rock, leaving tall vertical walls on either side. I appreciated the contrasts, but mostly enjoyed being back in the desert again.

Right now, this very minute, we are sitting in a very nice library in La Quinta, California. My package from Amazon has finally arrived and we will go pick it up after a while. This means we are free to leave this area. And where will we go? Should I tell you? Do you want to be surprised? 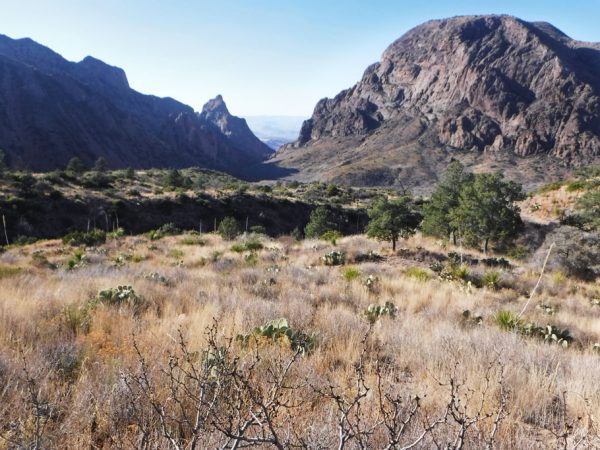 View from a hiling trail in the Chisos. Mexico is in the distance between the hills. 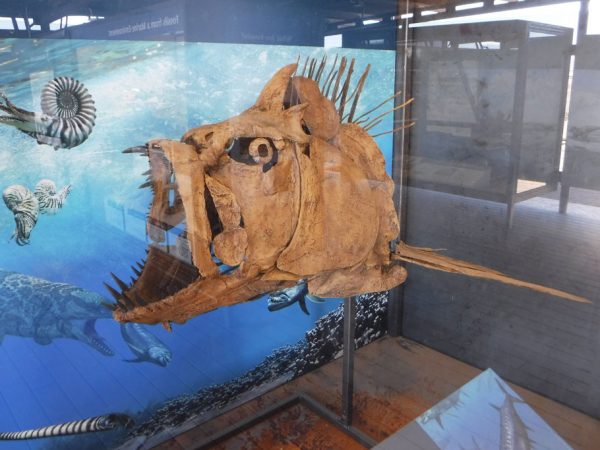 We drove back to the fossil exhibit we passed on the way in. The head of this nasty bugger is 3 feet high. 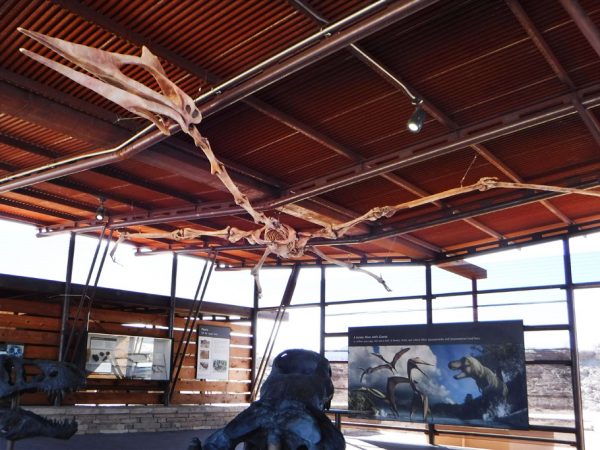 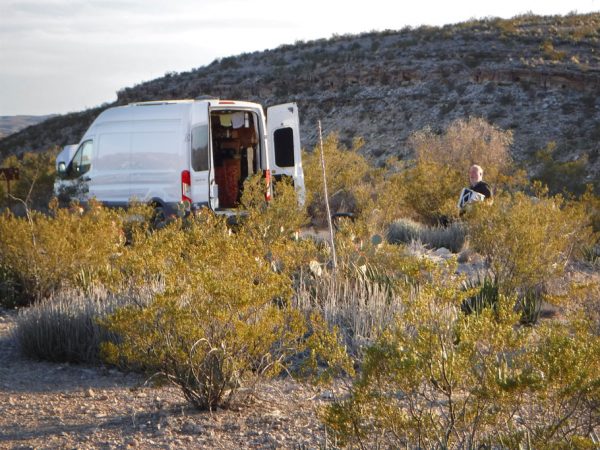 Our first campsite. Note that the hood is up. We prop it up at night while in the desert so pack rats won’t consider the engine compartment their new home. Greg bellows as he pumps the accordion’s bellows. 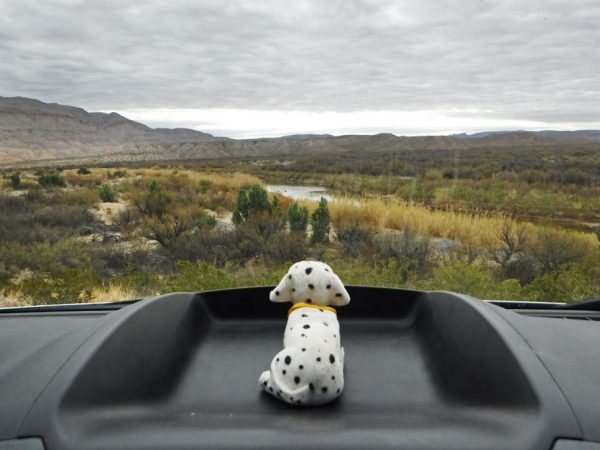 Overlooking the Rio Grande at the eastern side of the park.

Desert terrain on the eastern side of the park. Creosote and Lechuguilla plants love it here. We also saw coyotes. 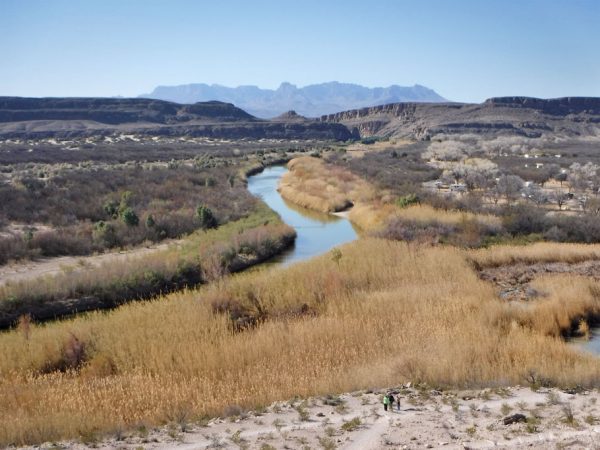 Group of folks down in front show you how high the river grass grows.

A big bend in the Rio Grande from the U.S. side. 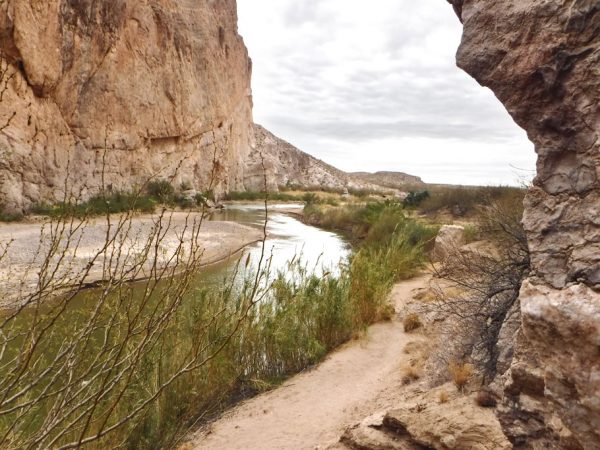 At the far eastern edge of the park the river cuts into Boquillas Canyon. Here’s a view from inside the canyon. 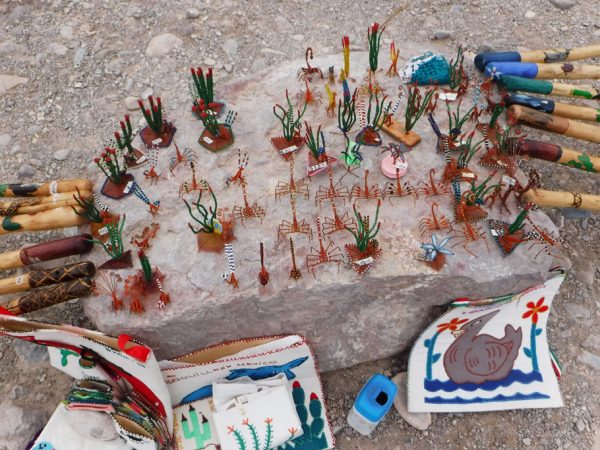 Residents cross to the U.S. side and set up displays like this one containing ocotillo cacti, scorpions, and roadrunners made of wire and beads. Handmade bags and walking sticks are also pictured. Gringos are supposed to leave money in the containers. 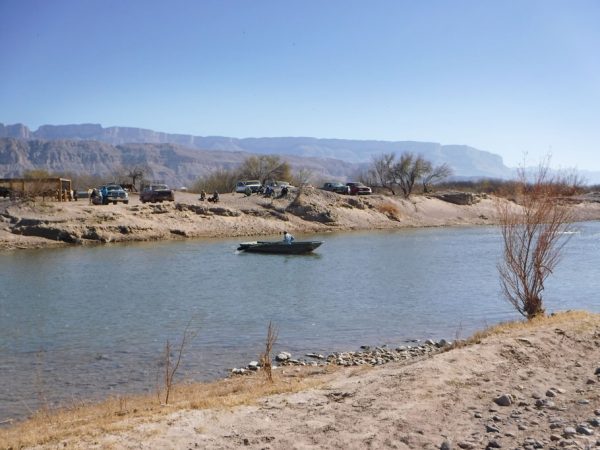 There was really no discussion when we heard you could get rowed across the Rio Grande. Of course we were going. 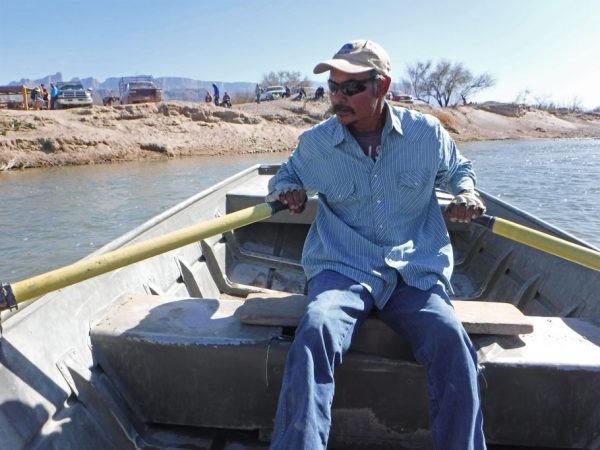 Our captain takes us across. 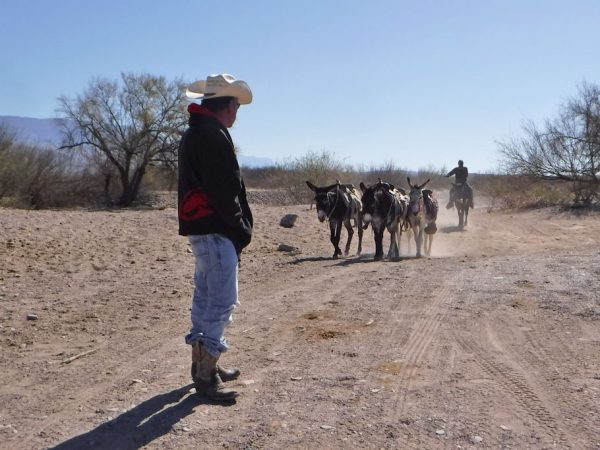 Felix was waiting on the other side to escort us to the village. We passed on the burro ride, and walked instead. 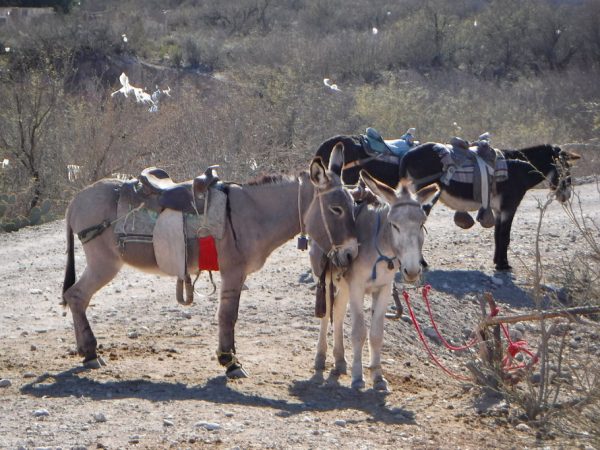 We’ve read that burros aren’t as sad as they look. They’ll be your beast of burden up to a point. Then they dig in, and can’t be moved. 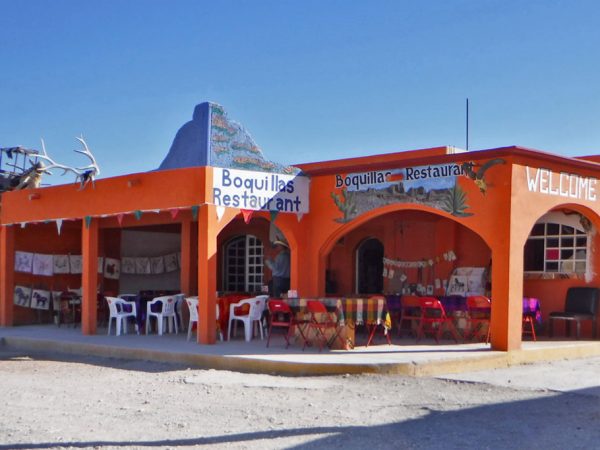 Felix took us straight to the restaurant owned by his family. The food was good and the prices were reasonable. The owner told us he makes an overnight trip down a bad road each week to get fresh vegetables. 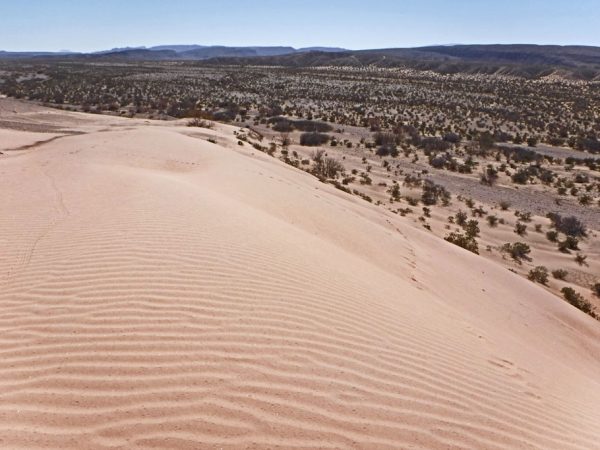 Felix took us on a tour through town. We stopped at his wife’s souvenir table. He showed us these sand dunes outside of town. Actually we had some trouble shaking him off. Next time we plan to say we don’t need a guide. Or say we just want whatever tour $5 will get us. 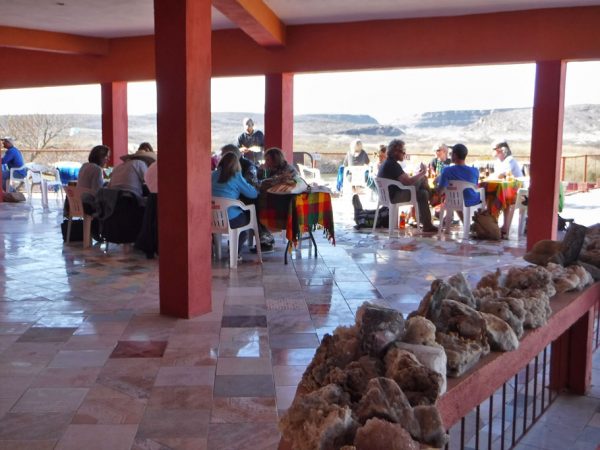 The other, more upscale, restaurant in Boquillas. We had some beers on the deck.

View from that restaurant’s deck, with Boquillas Canyon to the right. 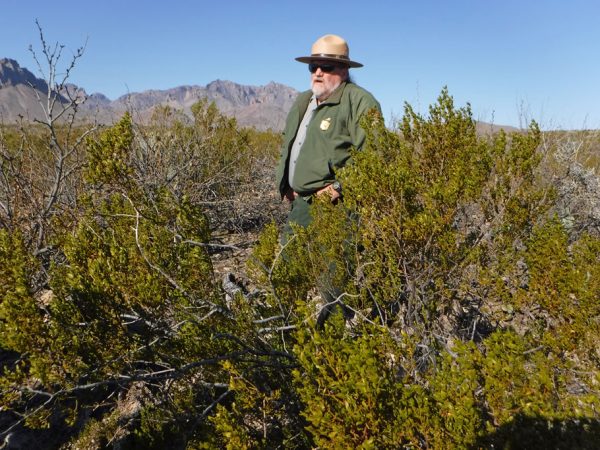 We usually enjoy ranger talks whenever possible. This guy reminded us of the Ron character in “Parks and Recreation”, though: a government park employee who really doesn’t believe in the government, and doesn’t have much use for people either. 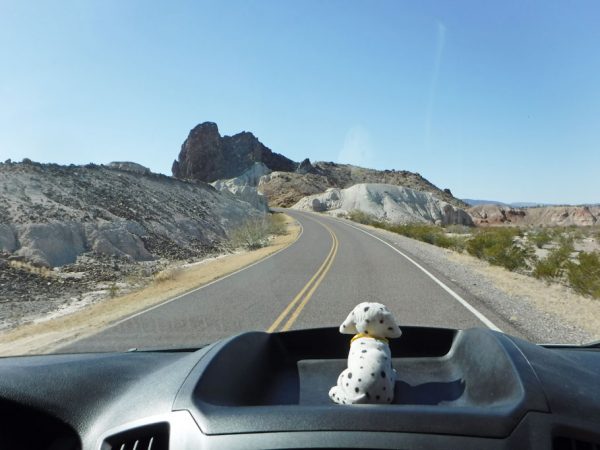 The terrain at the western side of the park looks more like badlands. 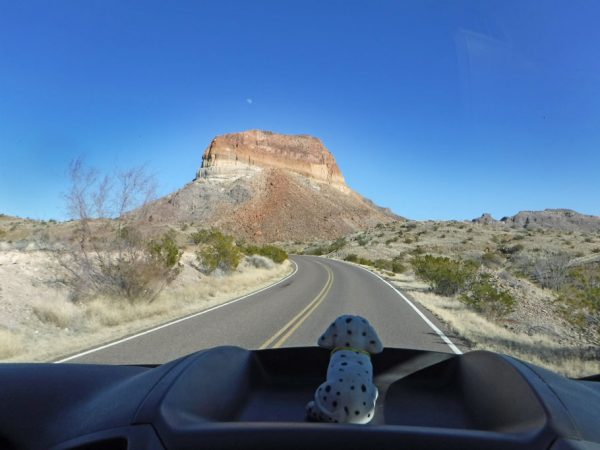 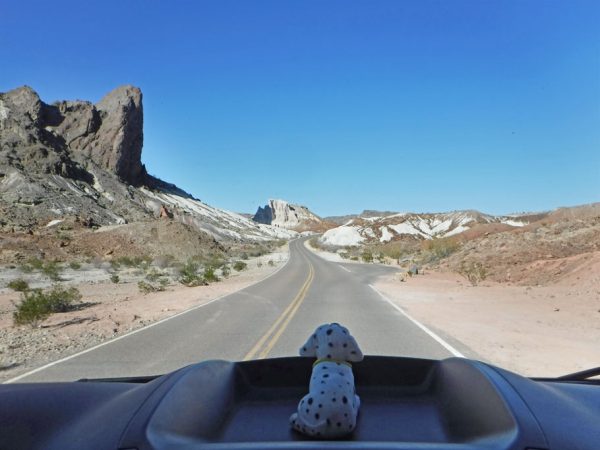 Terrain near the Castelon Visitor Center.

We hiked in to this box canyon at the base of Burro Mesa. 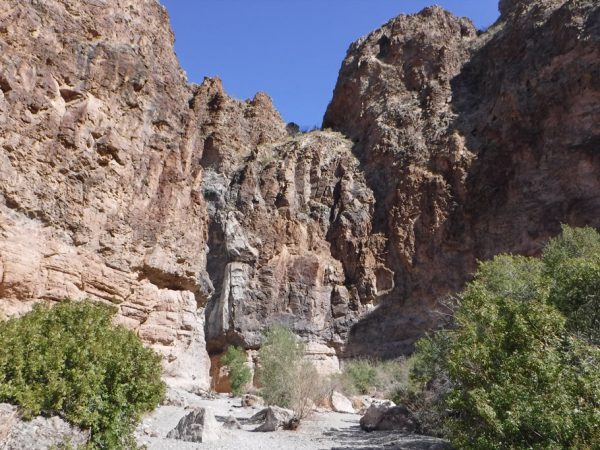 Deep in the canyon is the Burro Mesa Pouroff. It’s dry now, but becomes a waterfall in heavy summer storms. 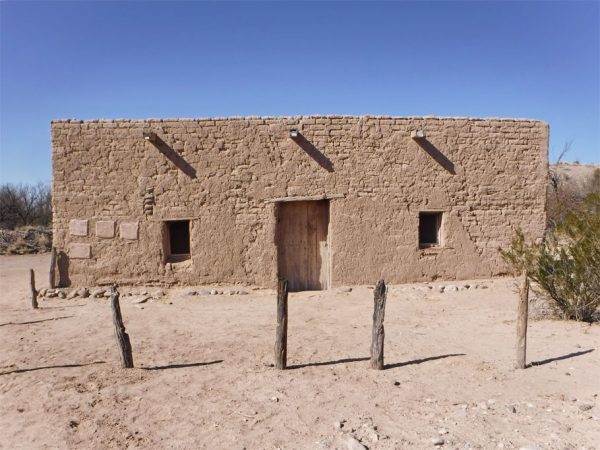 The Alvino House in Castelon. The family that lived here grew cotton near the river. 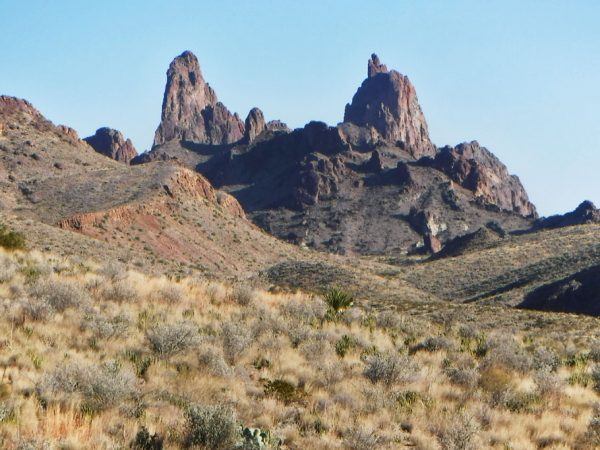 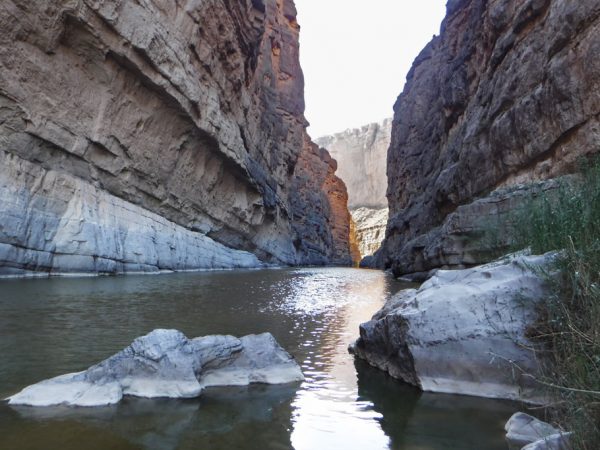 At the westernmost part of the park, the Rio Grande has cut through layers of rock leaving tall cliffs on both sides of the river. Here’s a view from the Santa Elena Canyon trail. 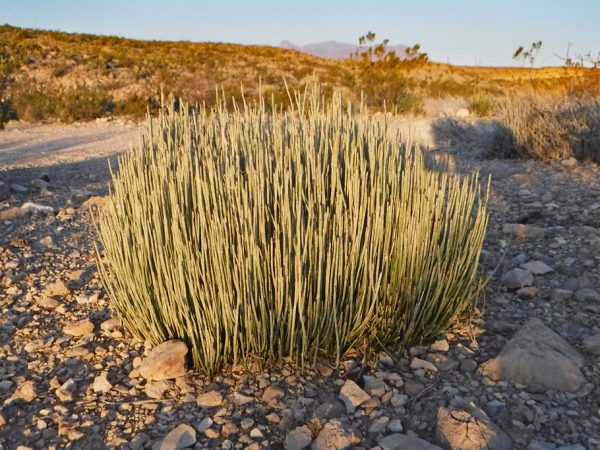 Our second campsite was named Candelilla after this species of desert shrub. Candelilla can be boiled and used to make wax, lip balms, and lotions. 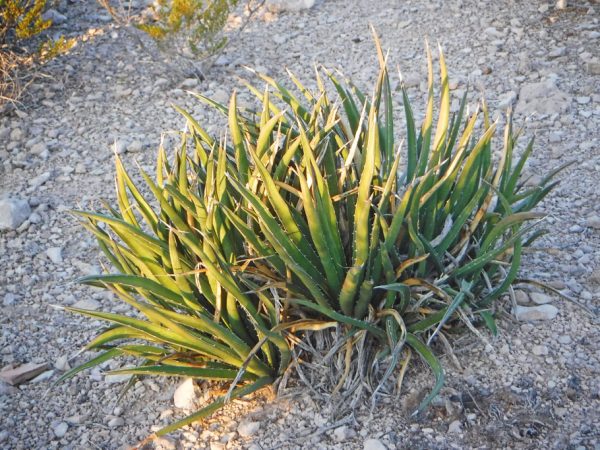 Here is the signature plant of the Chihuahuan Desert, the Lechuguilla. Similar to the Century plant, it grows a tall stalk and blooms once, then dies.