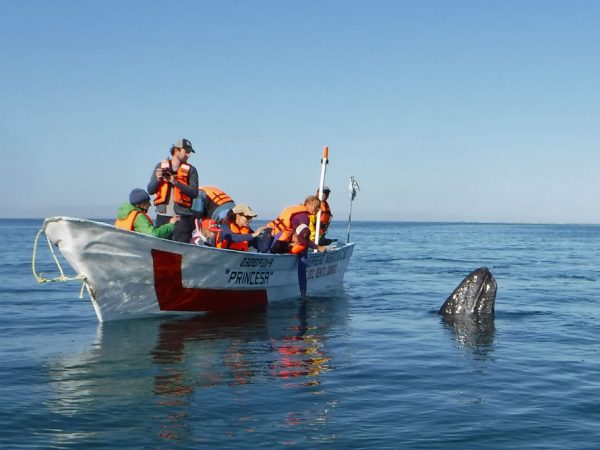 Grey whale surfaces near a tour boat. They seem to enjoy us tourists. They come up to get petted.

On March 9th we left La Bufadora and drove south, along the Pacific coast to San Quintín. We turned off the main highway Mex1 onto a dirt road, and drove to Cielito Lindo (pretty little heaven). The proprietor told us where we could camp, but didn’t want to bother with payment until happy hour. He’s a wise man.

One of our friendly, hand-shaking waiters in Ensenada had given me his cold. It felt like a low grade fever, lots of congestion and heaps of listlessness. (I’m used to being listful, not listless.) After a couple of days Duwan caught my cold. We relaxed at Cielito Lindo until the 15th.

Then we were off, driving down into the desert on Mex1. We drove through Rosalía, then were stopped at a military checkpoint. (Not sure what they are looking for at these checkpoints, guns maybe?) The road had been good so far, but turned bad starting here. For many miles I would drive around 20 mph, dodging big deep potholes. We pulled off into a nature preserve to camp.

The next morning we went to Cataviña to see cave paintings. We drove down some more bad road, and pulled off into the desert to camp.

On Saturday, the 17th, we crossed the 38th parallel into Baja Sur. This Southern end of the Baja peninsula is a separate state. There was a military checkpoint, and we had to pay 20 pesos to have the underside of the van sprayed with pesticide. We drove past the town of Guerrero Negro and turned off Mex1 onto an unpaved road. This 15 mile road was in good condition. It wound through a salt mine, and took us to Ojo de Liebre (Eye of the Hare). We stayed here until 3/20.

Right now, this very minute, we are in Mulegé, Baja California Sur parked on the rocky shore of the Mar de Cortés. Getting internet through our data plan has been a challenge, so we are using the WiFi from the restaurant we ate at 4 nights ago. We have just spent 3 nights on the beach at the Bahía Concepción. It was beautiful and we met some very nice people. We are turning back north now, but plan to take a different route – with hopefully new adventures – back to the US. 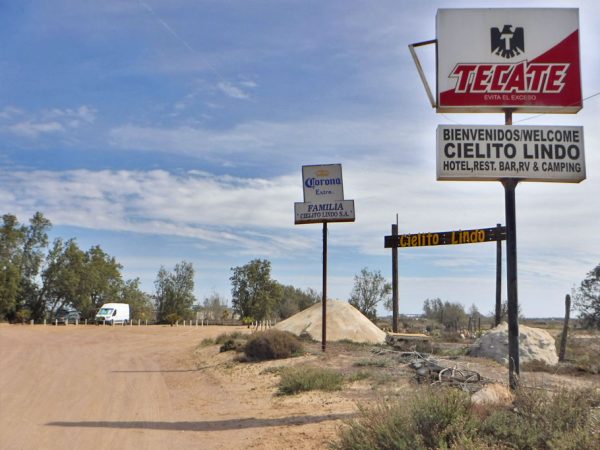 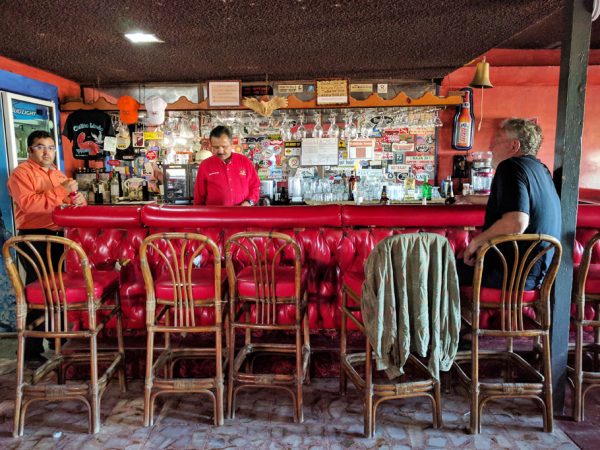 Inside the bar at Cielito Lindo. The proprietor is at center, and the bartender at the left. We wandered in to make our payment each day, hoping that soon we’d both feel good enough to travel on. Some days we felt good enough for 15 peso happy hour beers (about 87 cents). The last day Duwan had a couple of margaritas. Big Mistake! The only non-alcoholic liquid was a couple of squeezes of lime juice. 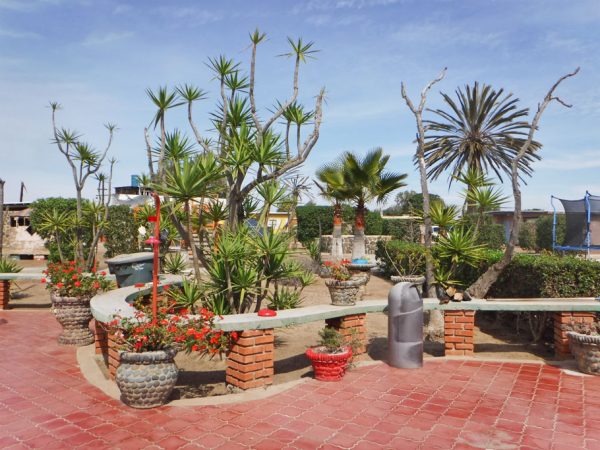 The grounds at Cielito Lindo. This was the last place we had decent cell service and Wi-Fi for many days. And at the back on the right? CLEAN HOT SHOWERS! All this for 90 pesos a night (about $5.20). 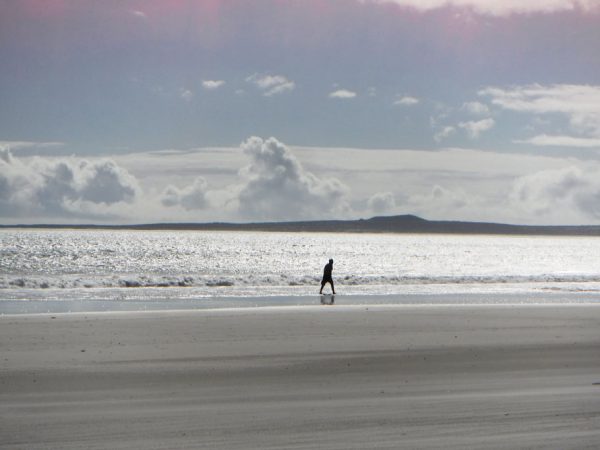 The beach at Cielito Lindo. 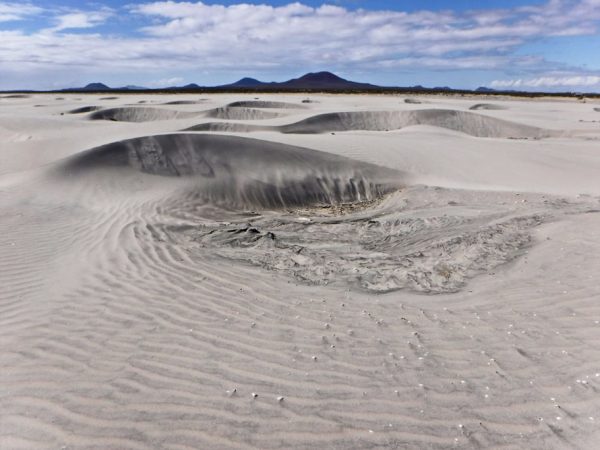 The beach is desert dust, not sand. Dunes form, and are quickly reshaped by the wind. 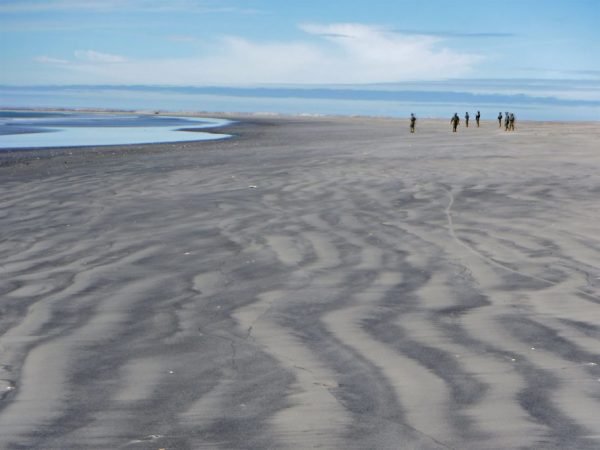 Military unit comes to check out the beach. 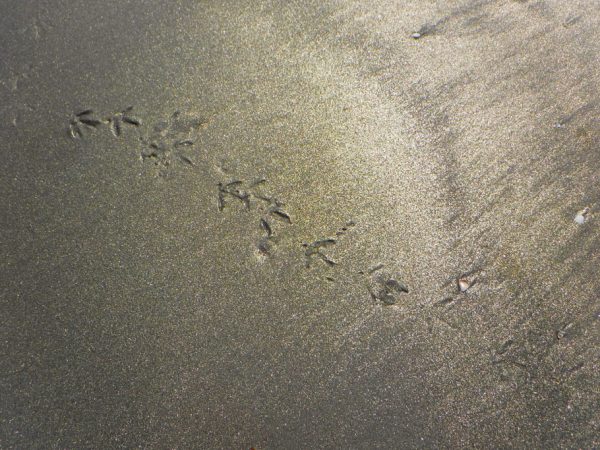 There are many flecks of pyrite (fool’s gold) in the water and sand. 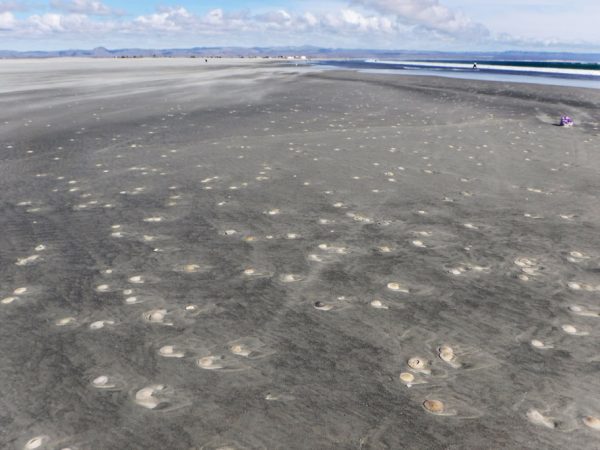 Sand dollars at the beach. 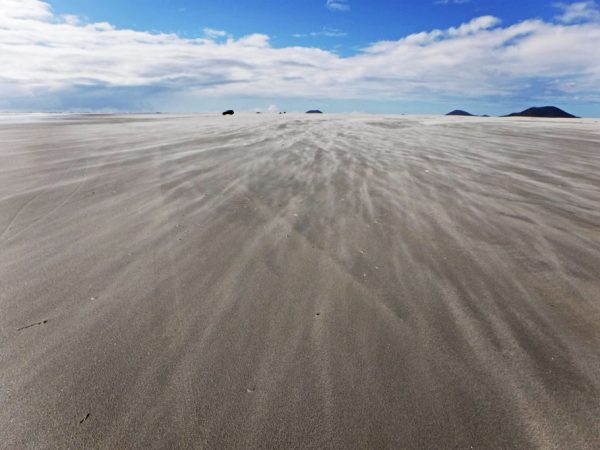 Dust is packed down hard as the tide goes out. But once it’s dried out, the wind blows it away in streams. 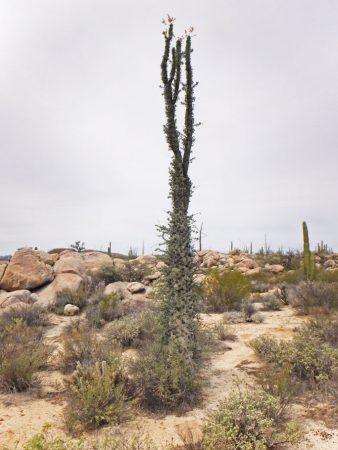 Here’s a Cirio tree. Cirio is Spanish for candle. Many of these have no large branches. The trunk just tapers from 18″ at the base to a point at the top. In the fall blooms crown the top, making it look like a candle. The skin of the trunk looks succulent like cactus, but the tiny thorny branches look like tree branches. 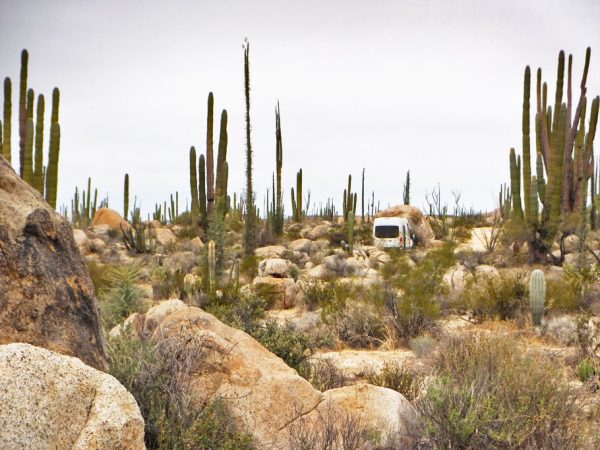 In the nature preseve, surrounded by Saguaros, Cirios and all kinds of cactus. This stretch of desert is downright lush with life. 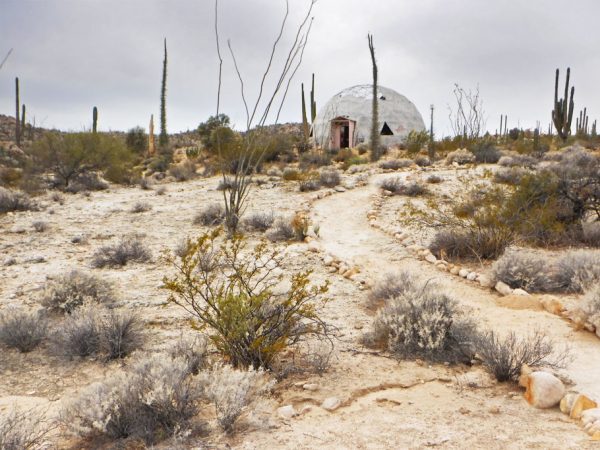 Old geodesic museum near the painted cave. The elements have taken over making it a ruin. 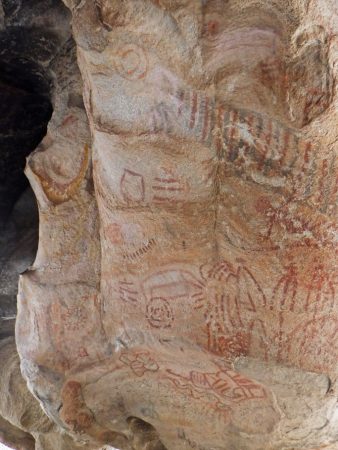 Pre-historic cave paintings by the Comichís. 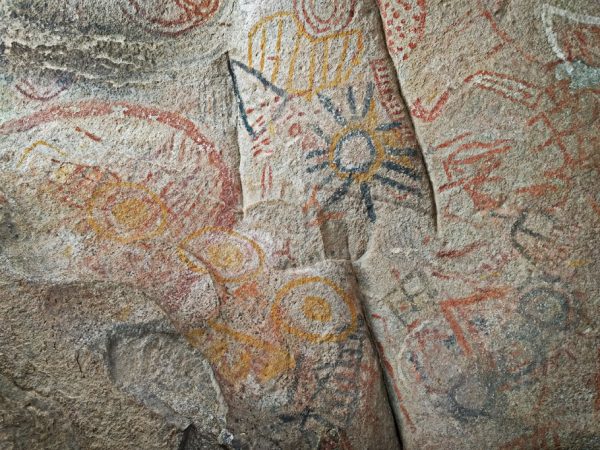 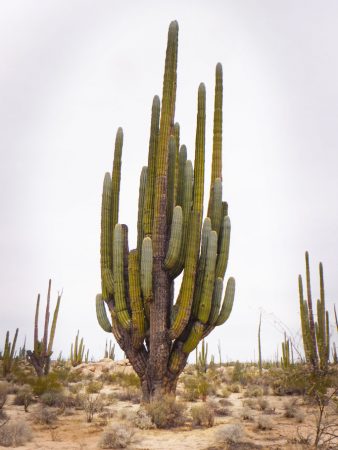 This grand old saguaro may have been alive in 1829, when president Vicente Guerrero abolished slavery in Mexico. (Yes, Mexico elected a mixed race president almost two centuries before the US did.) For most of the country this gesture was symbolic. It was one of the factors, though, that made Texas want to be independent from Mexico. 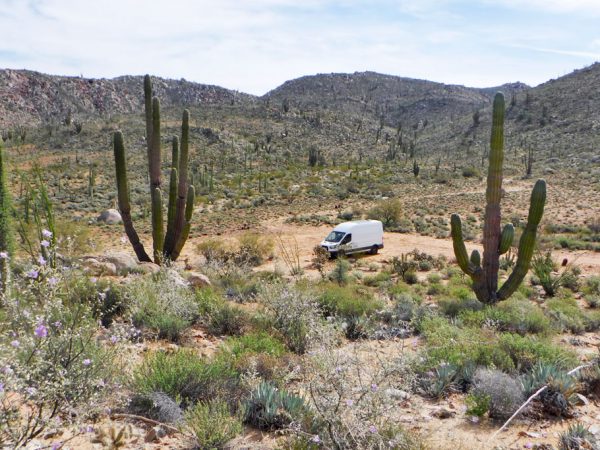 Here’s our free spot in the desert off Mex1, our second night of camping in the desert. No place was exactly level, but we drove up on some boards and came close to level. 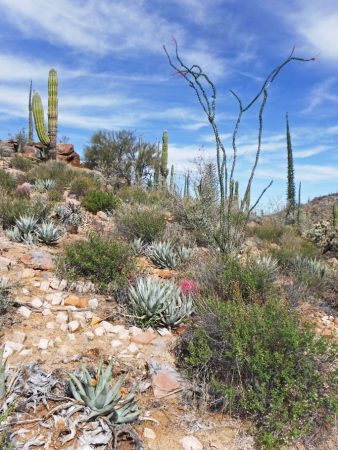 Hillside overlooking our campsite. Most of the center of the Baja peninsula (about a 350 mile stretch) is nationally protected land. 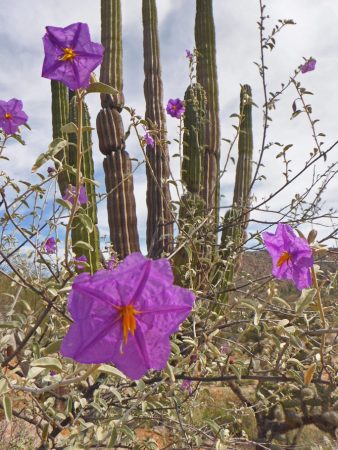 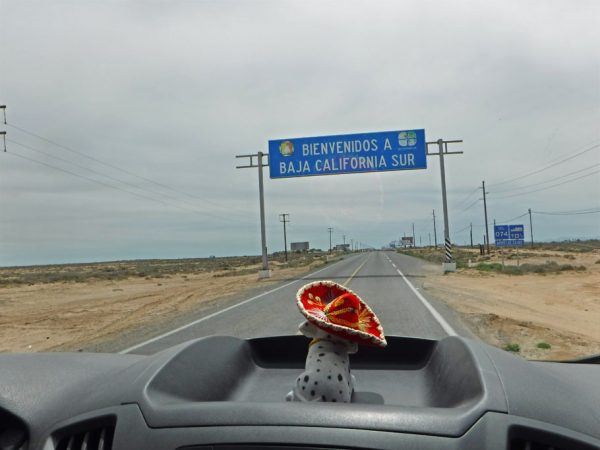 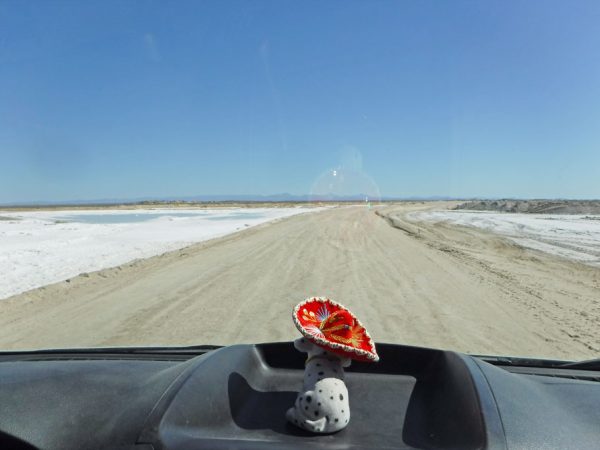 Road to Ojo de Liebre runs through a salt mine. There are big flat plains of salt drying in the sun. We’ve since heard that there is a good tour of the salt processing plant. 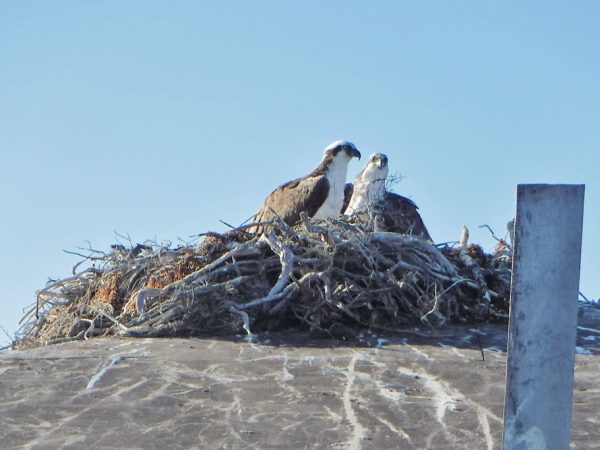 Ospreys guarding their young at Ojo de Liebre. Saw one carry a fish to the nest. 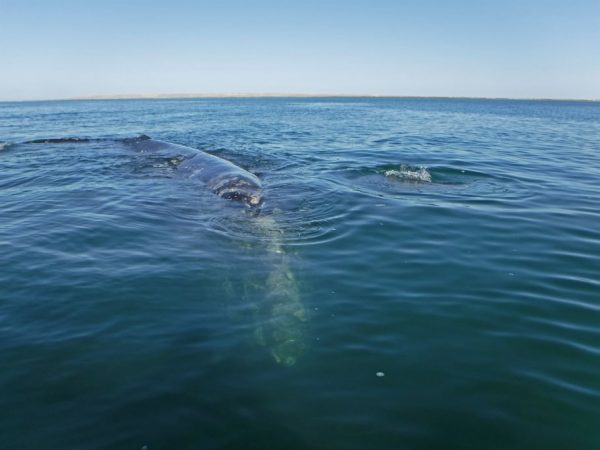 The gray whales come here to bear their young during the winter. A month ago the population was over 1,000. It’s about half that now, as the whales migrate up the Pacific Coast to the Bering Sea. Here on the left a mother is about to dive under our boat. Her head is under water and her tail is on the surface. On the right, her baby is ready to follow her under. 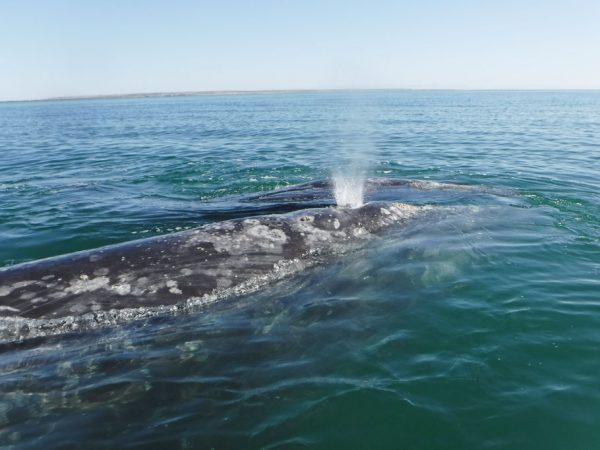 Mother blows off some steam. Her calf is on the other side. From our camping spot on shore we could often see the bursts of spray across the bay. The gray whale is actually black skinned, but barnacles and other organisms on the flesh make it look lighter. 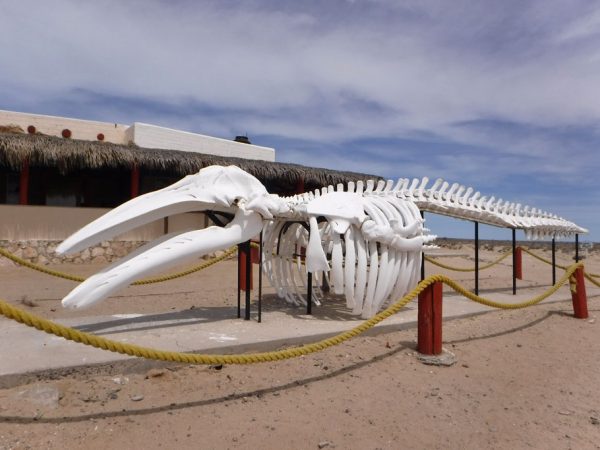 Skeleton of a 45′ gray whale outside the excellent visitor center museum.