The biosphere is home for 45 of Mexico’s 70 species of columnar cacti.

Remember Minerva? In addition to helping establish the Joshua Tree and Anzo-Borrego reserves in the US, she worked with Mexican president Rubio in 1931 to establish a 10K acre preserve near Tehuacán. Now the Tehuacán-Cuicatlán biosphere has expanded to a 1,800 square mile UNESCO World Heritage site (one of Mexico’s 35).

This warm semi-dry, semi-tropical region, bounded by mountain ranges, is considered the birthplace of Meso-American agriculture. Over 35K people live here now, mostly in small agrarian communities. But the attractions for us were the cacti and fossils.

The first place we camped in the biosfera was in San Juan Raya. This desert community of 2K rests on a thick layer of marl. Erosion in nearby arroyos has exposed many fossils. Fossils can be seen at the local museum, and by talking guided walking tours.

I don’t think our first candidate for guide had ever seen such a heavy white-haired gringo before. He was scared he’d have to carry me back out of the desert. So he pawned us off on Profino.

Profino had spent three years doing construction work in Manhattan. He was unafraid. He could speak English. He was great.

Now one of the things we enjoy about Mexico is the general sense of freedom. People, especially drivers, do whatever they want. In months I’ve only seen one traffic stop. I hate to even imagine what heinous acts those three kids in that red car committed to get pulled over.

But, when it comes to natural resources, Mexico can be very protective. Here in the Biosphere, you must be accompanied by a guide for everything — even a trip through the museum.

Our second stop was Botánico Helia Bravo Hollis. We explored around the campground here. But didn’t hire a guide for any trails.

From Helia Bravo, we veered northeast through the mountain town of Tehuacán. We didn’t try to locate the newly found temple of the flayed god. But we did splurge, and drive through the Biosphere toward Oaxaca on the toll route. It was one of the nicest rides we’ve had in Mexico.

* Click on pics to enlarge and view in a slideshow. 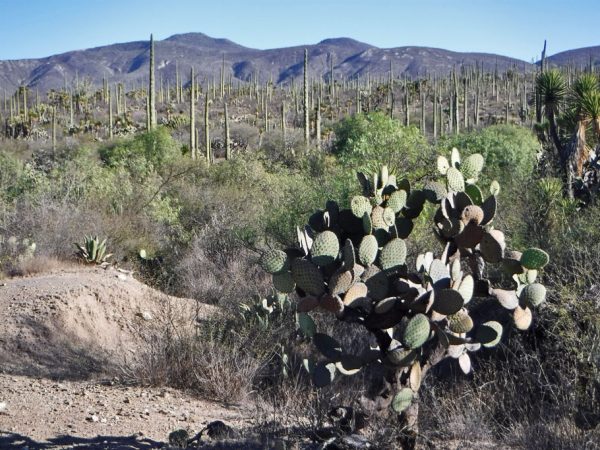 There are so many different species of desert life here, it almost makes the Sonoran desert seem boring. 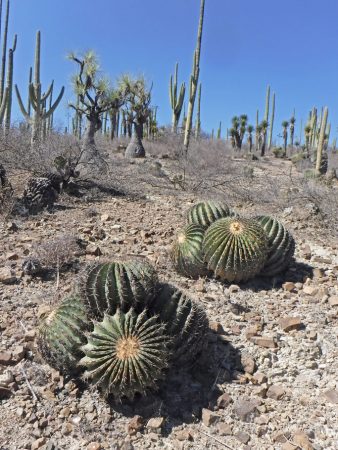 On our hike to the fossils, Profino pointed out different desert plants, with an emphasis on which blossoms were edible, and which agave made the best mezcal. 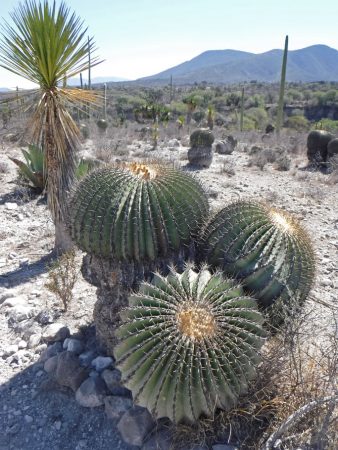 Here in the biosphere, people have been farming the aerable land, allowing goats to graze, and harvesting cactus blooms for many years. The authorities have been working with them to achieve a sustainable balance of these activities. 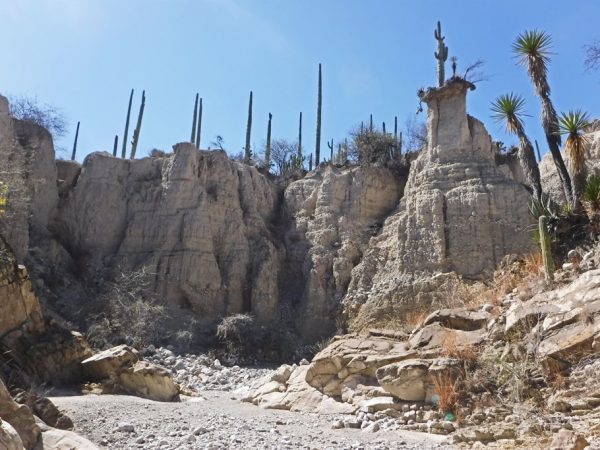 Our hike took us into this arroyo. Profino said that during summer storms the water gets over waist high in here. 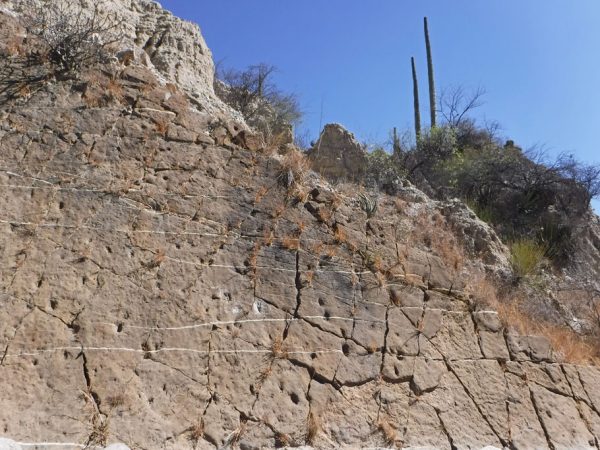 We came to this former lake bed pocked with pterosaur footprints. The strata in this arroyo have been bent in all directions. This layer is now almost verticle. 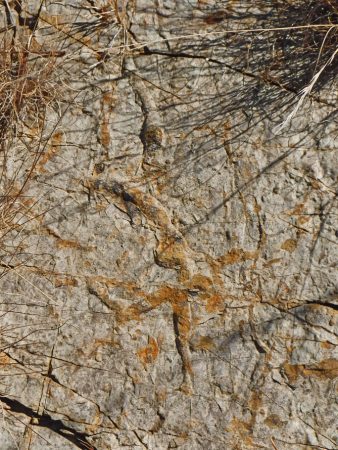 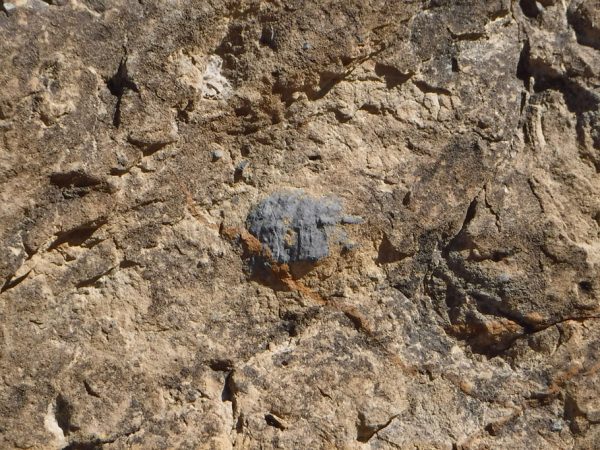 Gray trilobite in the center (seen on our guided walk). 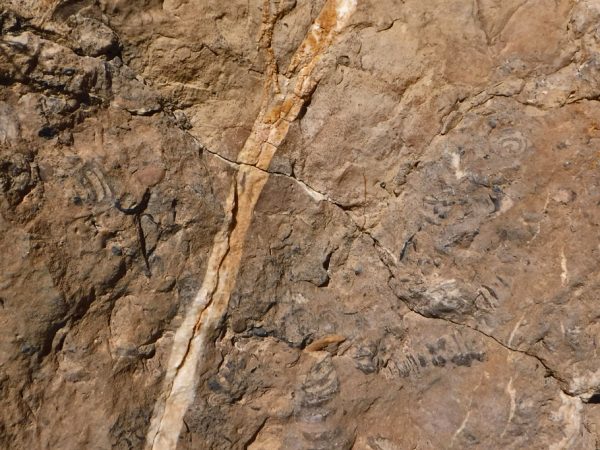 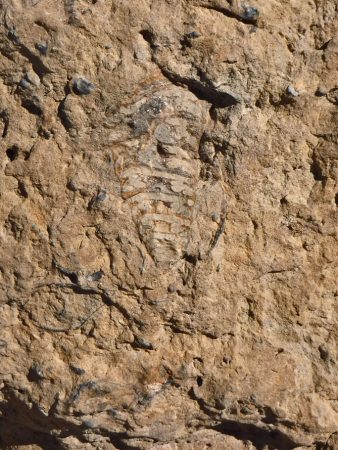 Imprint from another trilobite seen on our walk. 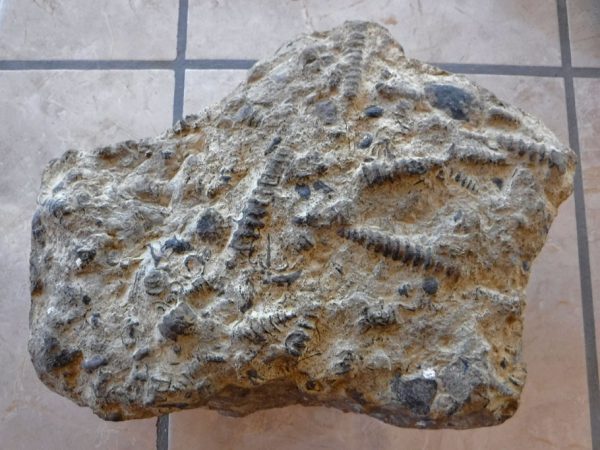 Paleozoic fossils in the museum. These were found nearby. 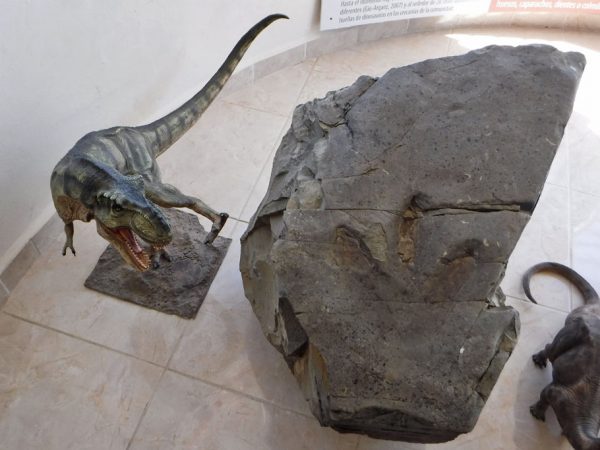 T-rex footprint in the museum. (The figure to the left is a model – not an actual t-rex.) 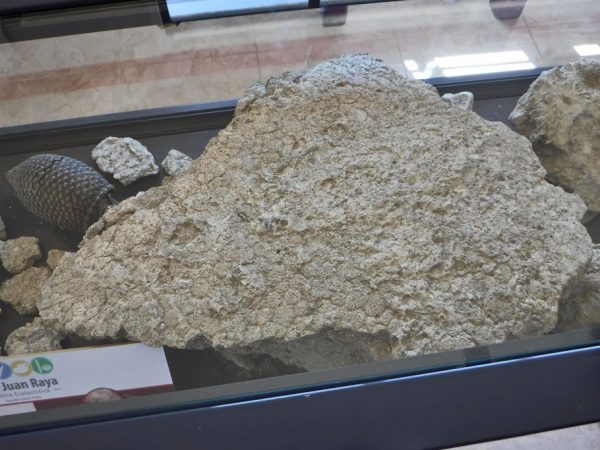 At the bottom of this rock you can make out a pattern of hexagons. This was left by a huge prehistoric armadillo shell. These armadillos grew to be two tons, the size of our van. (From Museum.) 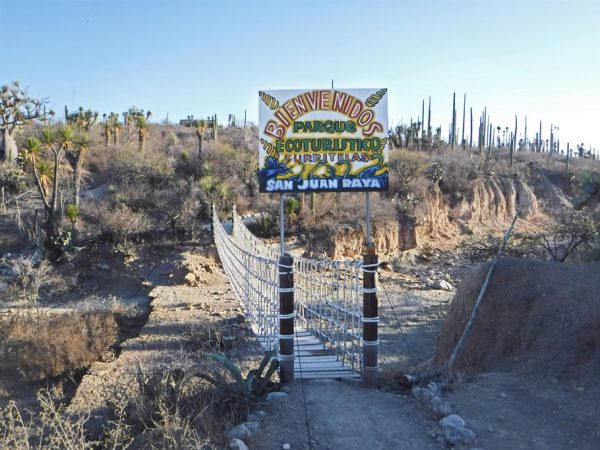 Swing bridge over arroyo near our campsite. It leads to an old lake bed with many sauropod footprints. 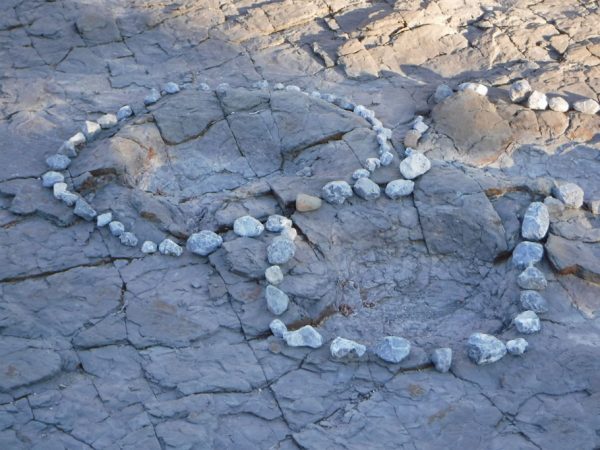 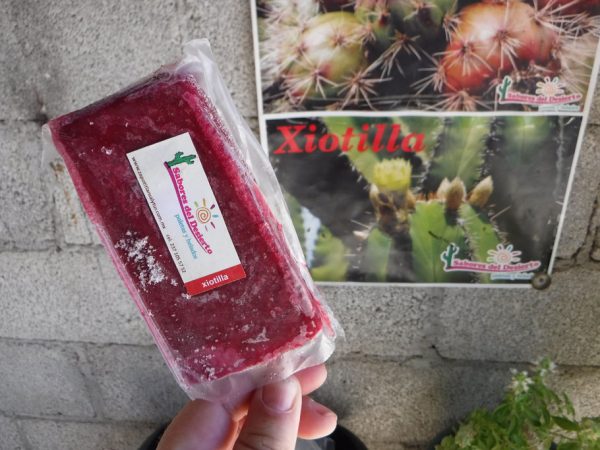 Profino, had a shop in town, where he sold five varieties of hand-made cactus blossom popsicles. We had the Xiotilla. On our walk he also pointed out a type of agave he used to make mezcal. We had to try that, too. 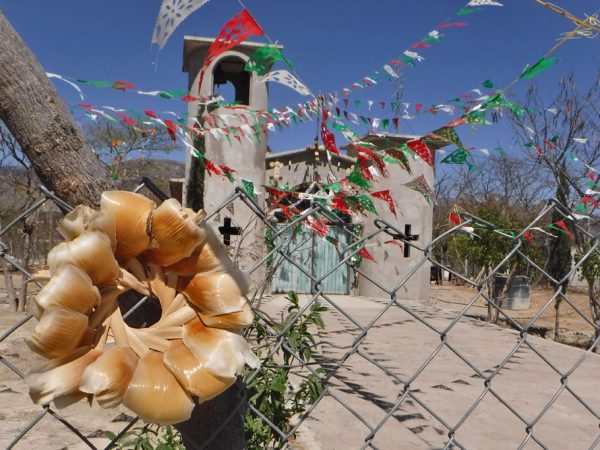 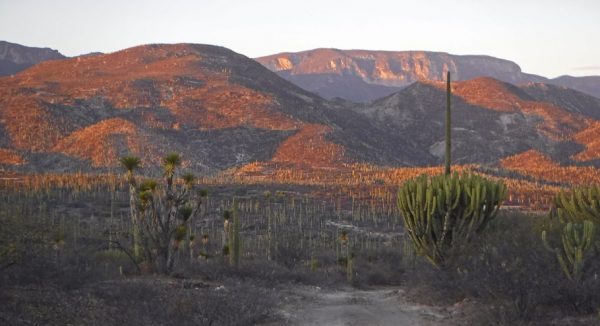 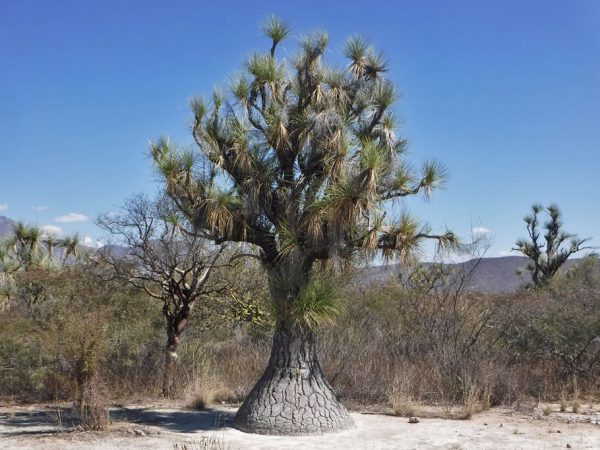 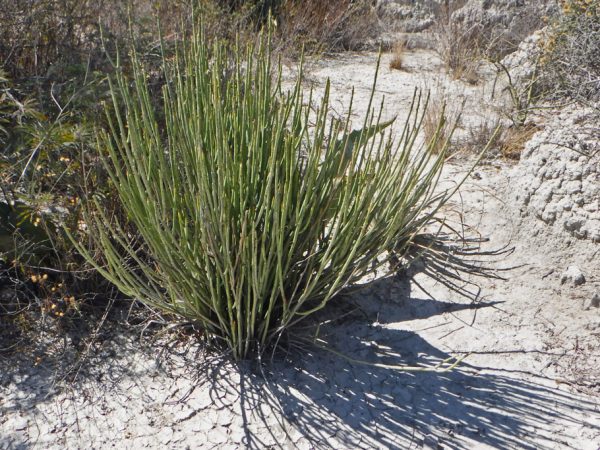 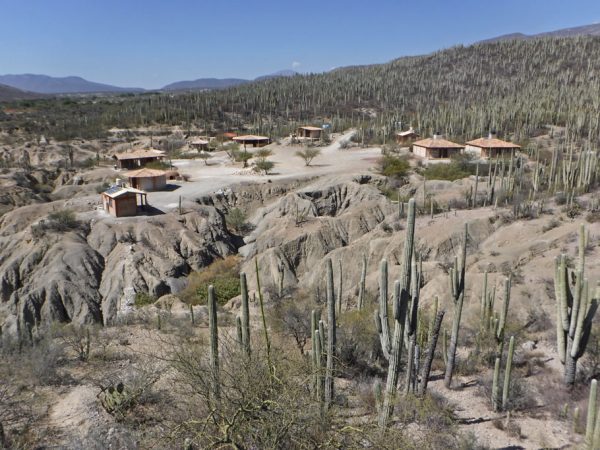 Looking down at the camping area of Helia Bravo. There is salt in the soil of the hills. For many years people here have dammed up crevasses that drain from the mountains. After rains, the water evaporates leaving salt. 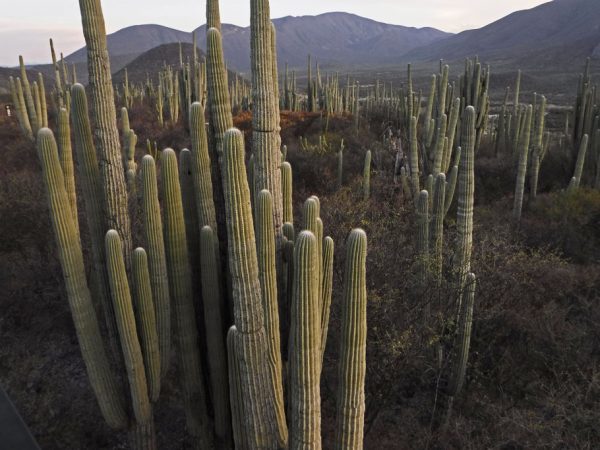 There were a few miradora towers at Helia Bravo, allowing you to climp up and look down into the cacti. 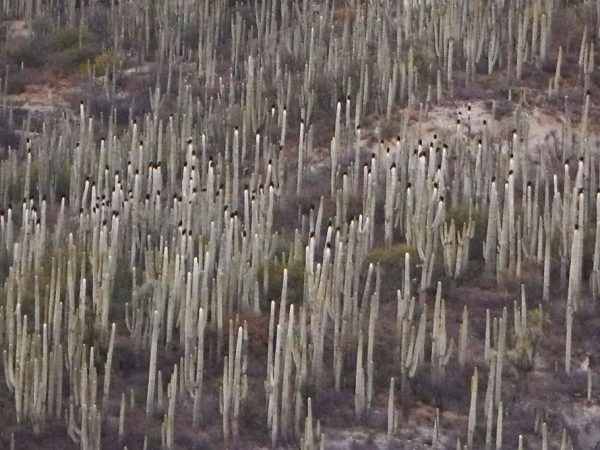 During the day we noticed this big patch of white-tipped cacti. At dusk, these black birds flew in, using the cactus tops as perches.

I complain about the need for a guide, but this area is really under threat. People take cacti and leave garbage. 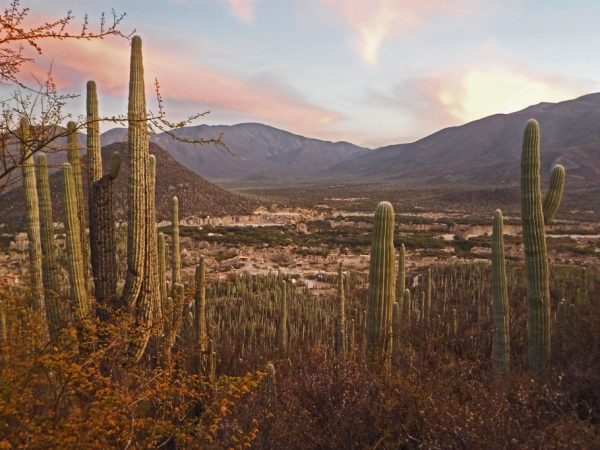