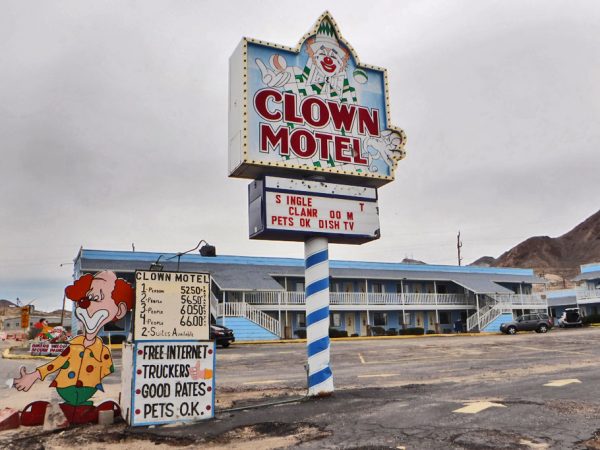 Our first stop on the way to the Extraterrestrial Highway on our quest to find aliens was at the Clown Motel in Tonopah. Each door has a different clown painted on it. We didn’t go inside to check the interior decor. If aliens don’t creep you out enough – think about booking a room here.

I got this idea in my head last year to visit Area 51 – you know, the secret military installation in Nevada where they keep captured Aliens and do experiments on them. I was actually thinking about my friend Ellen when I came up with this idea – she writes a cozy mystery series and her main character, Mollie, is an investigative reporter for FAROUT (Federation for Alien Research, Outreach, and UFO Tracking). Mollie would love to get the scoop on Area 51 so I thought we’d visit for her (Is it ironic looking into little green men who may or may not exist for a woman who definitely doesn’t exist?). So I got on the internet and searched for info about visiting. What I found out is that people aren’t allowed to visit but I did find this blog post about a guy who did the journey to the back gate of the place – stopping in a itty bitty town in the middle of nowhere Nevada called Rachel, acquiring a map at the diner one of the few businesses in town, and then driving down a dirt road to Area 51’s back entrance just to take a picture.

I revived this notion during our latest trip to Nevada and did another internet search for details about the journey. This time I found an article titled, “You’ll have a gun to your head if you don’t follow these rules when visiting Area 51” and thought maybe it really wasn’t the most fun idea after all. Still, since we were in Nevada I thought we’d travel down the Extraterrestrial Highway anyways, just to see what was there, keeping our eyes peeled, looking for Aliens for my fictional friend Mollie.

* Click pics to enlarge and open into a slide show.

* If you are curious about Mollie, who is not only fascinated with Aliens, but also loves chocolate, and cats and solves murder mysteries while adjusting to her husband new passion for sailing, check out her books here on Amazon or at Ellen’s website at ellenjacobsonauthor.com. 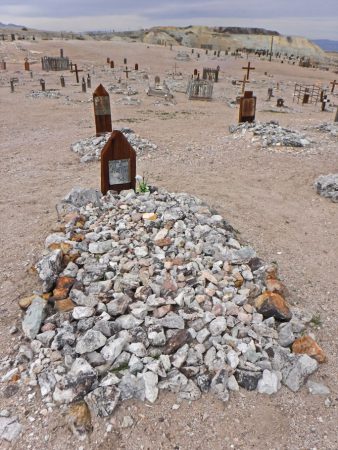 And to further creep you out there is a graveyard next to the Clown Motel. Tonopah was once a thriving silver mining town. The Old Tonopah Cemetary was founded in 1901 with the internment of its first resident. The grave in the forefront belongs to Frank Burk who died in the Tonopah-Belmont Mine Fire of February 23, 1911. 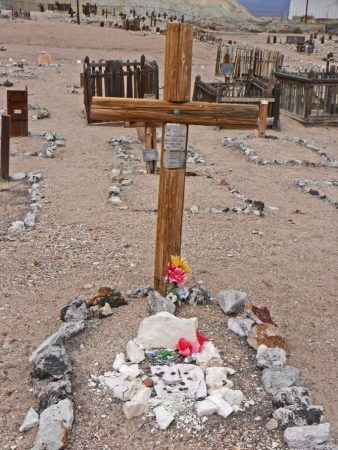 Another victim of the mine fire. 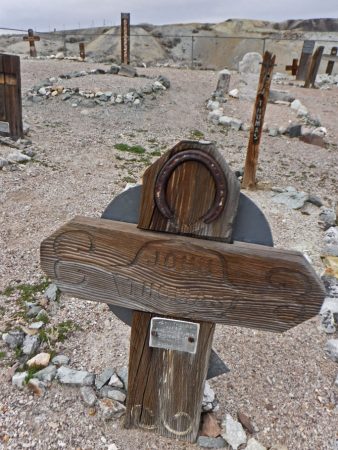 John Thomas died in 1908 of “hemorrhage of the lungs.” He was from England. 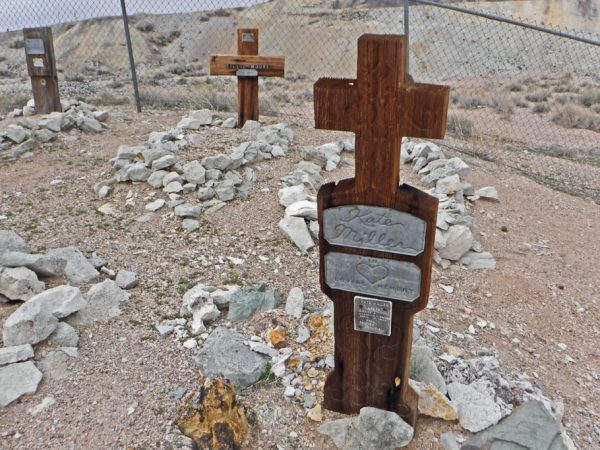 A Canadian from British Columbia, Kate Miller died from a morphine overdose. 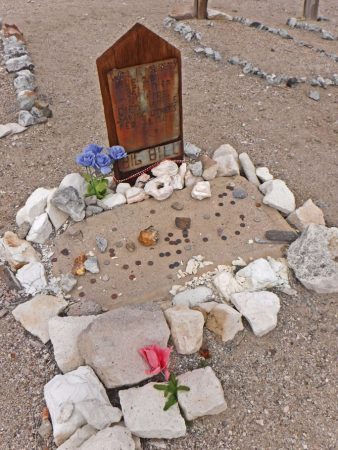 Big Bill Murphy died at age 28 saving other miners from the big fire. In total 14 miners died in the fire. Many others interred at the cemetery died from the mysterious and never explained: “Tonopah Plague” of 1902 (perhaps Aliens were involved?). There are also many babies here and other eternal residents who started out their lives in places as far away as Ireland and Italy.

From Tonopah we headed to Lunar Crater National Natural Landmark. It is at the southern end of the Pancake Mountain range in central Nevada. It’s a maar crater similar to those we saw at El Pinacate, Sonora, MX. It may have been formed by several explosions.

View from the high northern side, looking down into Lunar Crater. 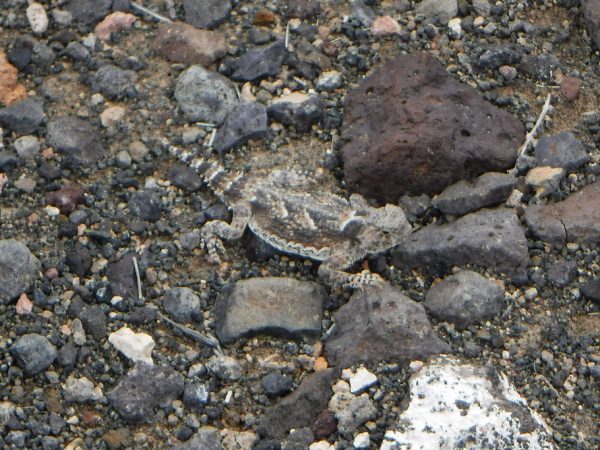 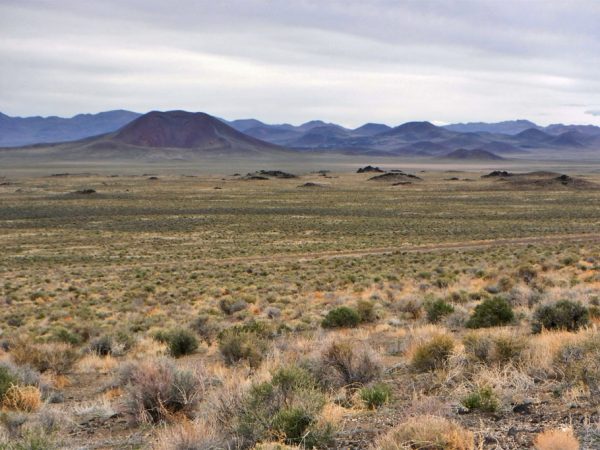 Looking south from Lunar Crater over the volcanic landscape. 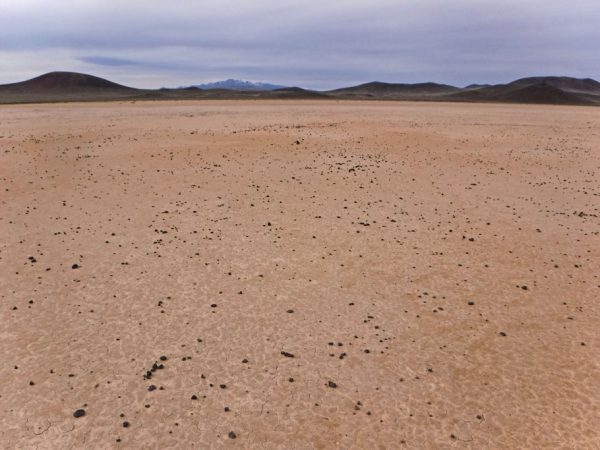 Sand flats near the Lunar Crater are surrounded by volcanic hills. The sand is littered with small pieces of volcanic pumice. 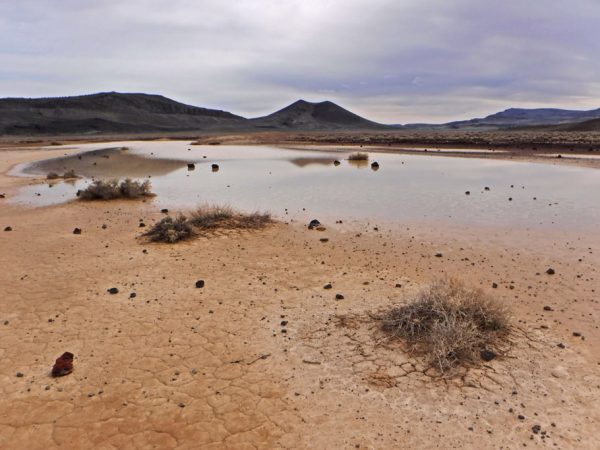 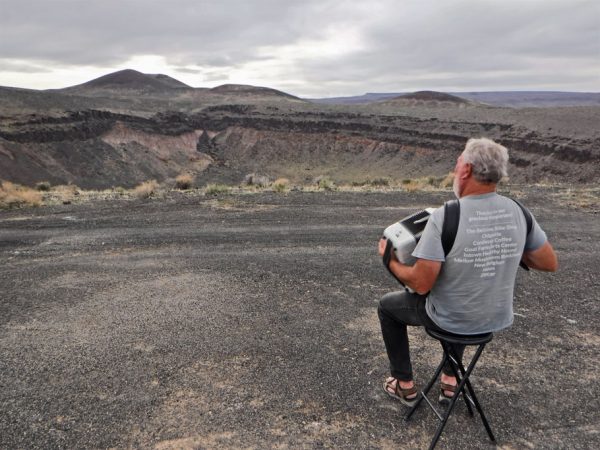 In 1972 the crater was used to train astronauts to recognize volcanic features at the Apollo 17 landing site. Greg uses the crater as inspiration for a new accordion song. No Aliens here, yet. 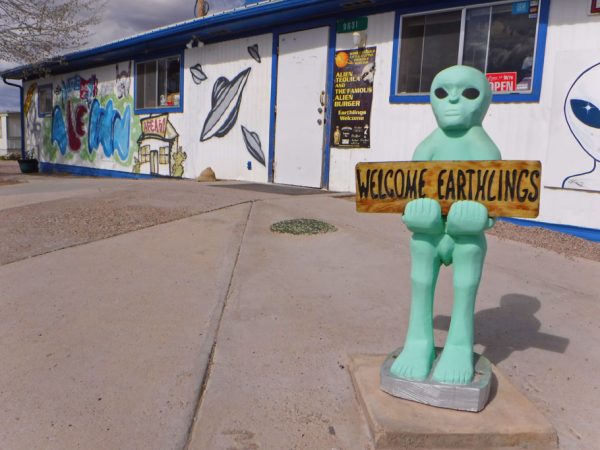 After a night at Lunar Crater, we finally headed down the Extraterrestrial Highway. Welcome to the Little A’Le’Inn. 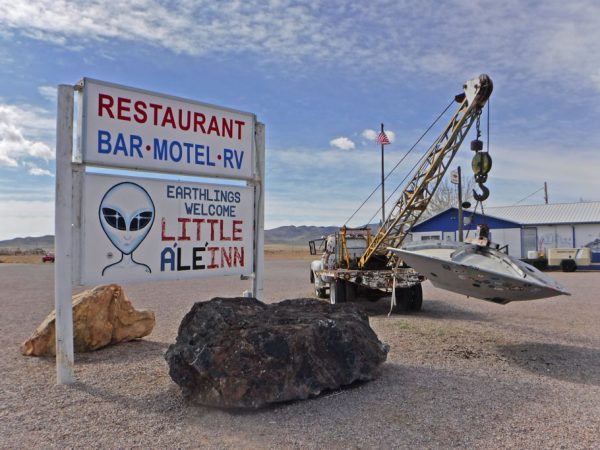 At the Little A’Le’Inn in Rachel, NV this truck carries what is undoubtedly a genuine UFO that must have landed nearby. Finally Alien evidence! 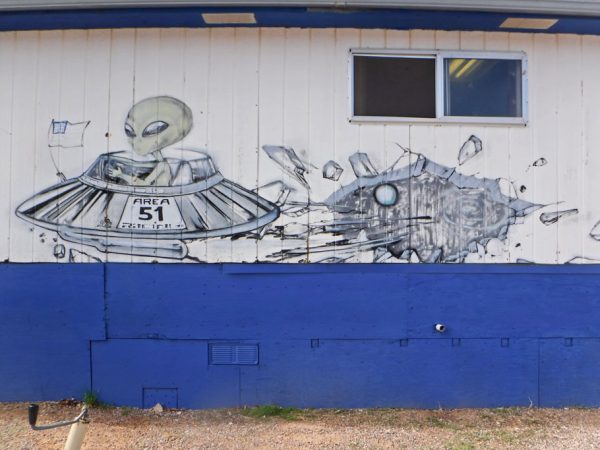 Spaceship bursts through the wall of the A’Le’Inn in Rachel, NV. He is sporting a US flag. He must have already cleared Customs and Immigration. 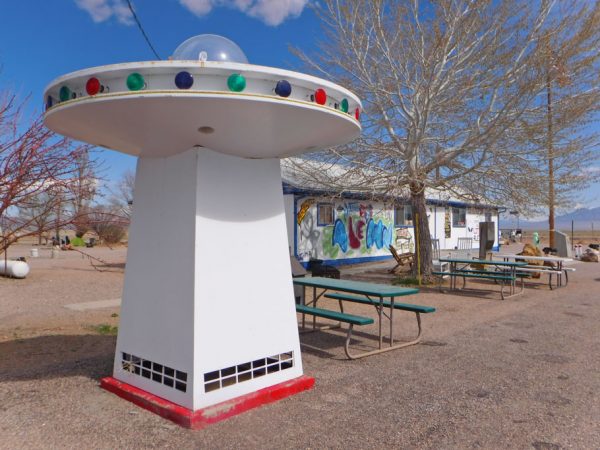 Picnic area outside the A’Le’Inn is designed to make visitors from space feel right at home. Inside A’Le’Inn is a diner with a lunch counter, a small gift shop, and super friendly staff. They also run an RV park and you can camp right outside the parking lot overnight for free. 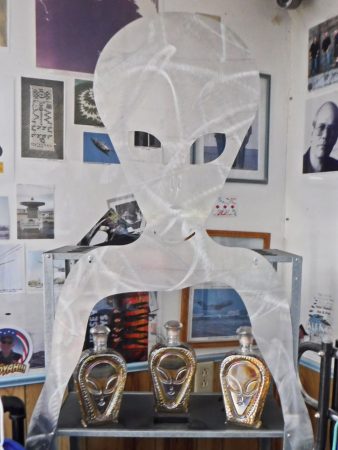 In the A’Le’Inn you can buy this tequila, which is obviously the preferred beverage of ETs. 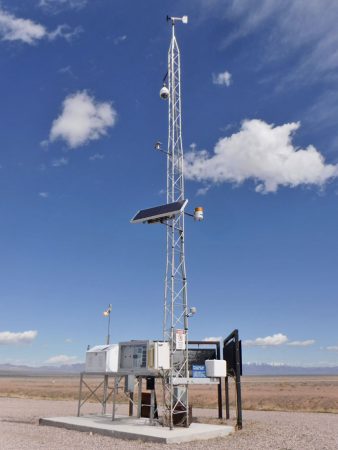 One of 23 Community Environment Monitoring Program (CEMP) stations that surround Area 51 and the Nevada National Security Site. The program was established in 1981 when underground nuclear tests were still being done in Nevada. The stations track and report weather and radiation levels in the atmosphere. 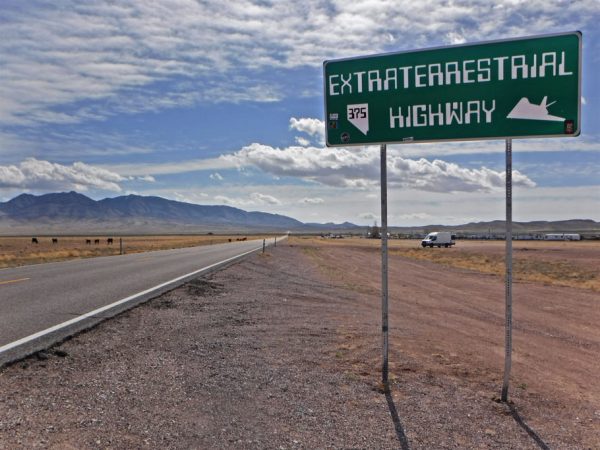 Ballena Blanca waits patiently in the distance for us to restart our journey down the ET Highway. 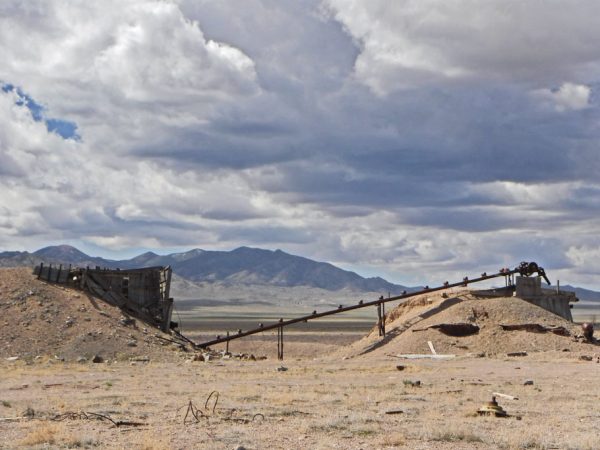 Defunct mine near Rachel, NV. 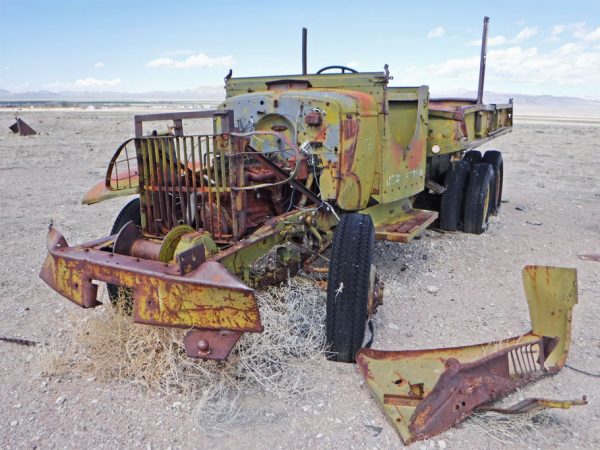 Equipment left behind near Rachel after tungsten mining became unprofitable. 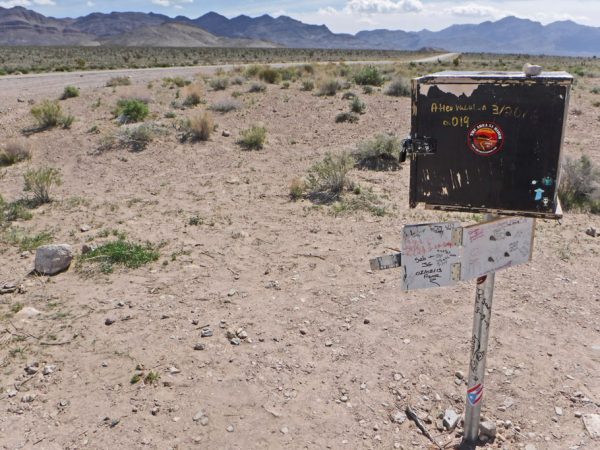 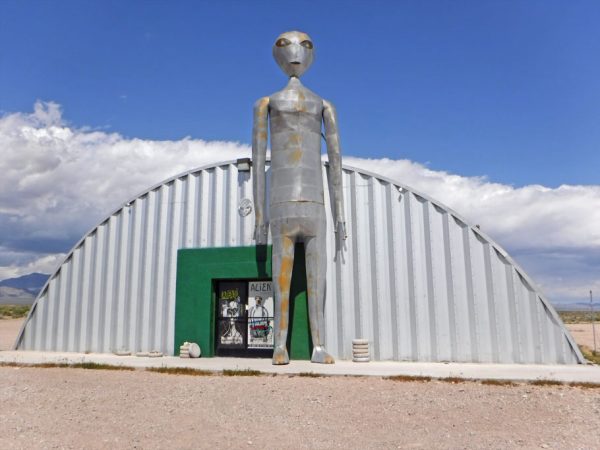 The Alien Research Center, guarded by this guy, is one of the few businesses on this long stretch of Hwy. 375. (It is actually just a gift shop.) 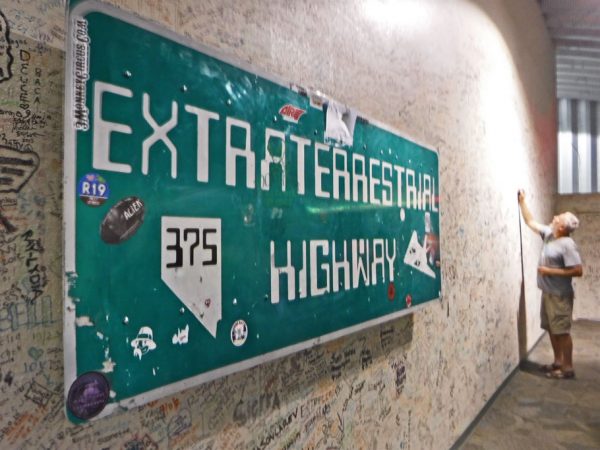 We never did see any real Aliens, but Greg leaves a message for them inside the ARC.

4 thoughts on “Searching for Aliens”