We spent a couple of nights boondocking (free camping) before we entered Valley of Fire just outside of the park on BLM land known as Poverty Flats. There were a couple of spits of land that stretched between long, deep arroyos. Although there were many campers here, there was room to spread out.

We just bought a new National Park pass. For $80 we can visit any National Park in the country for no additional cost. Since the entry fee for many of the most popular parks can run up to $30 and we love visiting parks the value of this pass can increase pretty quickly. But even though we love our pass and it greatly enhances our traveling experience, I believe we could roam around the southwest without it and still see amazing things. I don’t know how many times we have visited free spots on public BLM (Bureau of Land Management) land and have seen sights that looked actually the same as those of some super popular National Park we had just been in.

But the appeal of National Parks persists because, unlike many other public lands, they are organized. National Parks have visitors centers, museum displays, ranger talks and tours, and brochures, newsletters, or pamphlets with information about the park and maps of well-designed trails. National Parks just make everything easy.

So with our park pass and all the other free public lands out there, we keep our adventuring dollar down and usually don’t need much more. But every once in a while we hear so much about some state park with a visitor center and organized trails that we decide to spend just a little more to expand our adventuring scope. Valley of Fire State Park in Nevada was one of these.

In reality, our visit to Valley of Fire ended up being super cheap. The entrance fee was only $10 and we were able to snag a camping spot (this park is way popular and camping spots fill up really quick) for just another $10. And the camping came with hot showers! Unless we are visiting friends, hot showers are a bit of rarity for us when we are traveling in the US. We both took showers on the day we arrived and the day we left – 4 showers. If you think about our visit in showers dollars which can cost anywhere from $2 to $7 on the road, we really paid $5 for each shower and got an amazing park and camping for free! 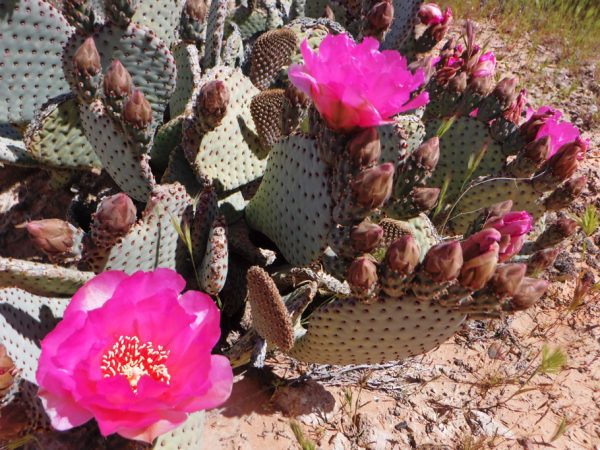 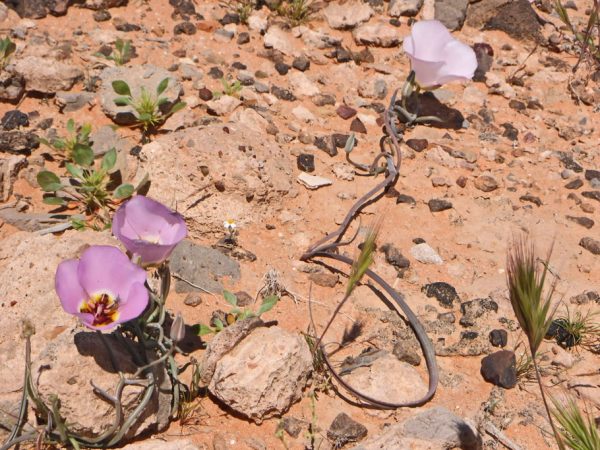 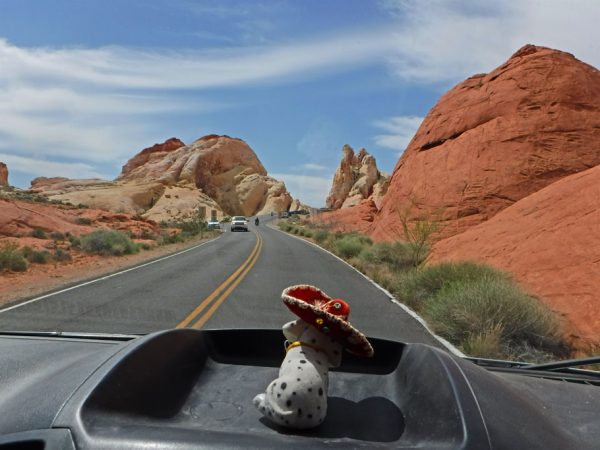 Bob enjoys the view as we enter Valley of Fire and head for our first hiking trail, White Domes. 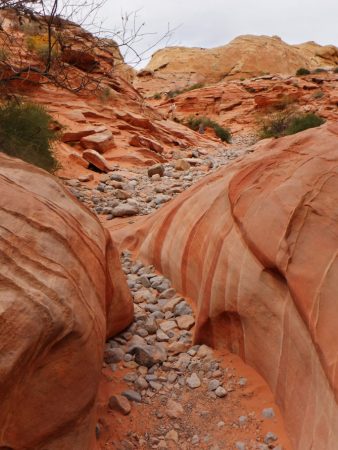 Another view from the White Domes trail. 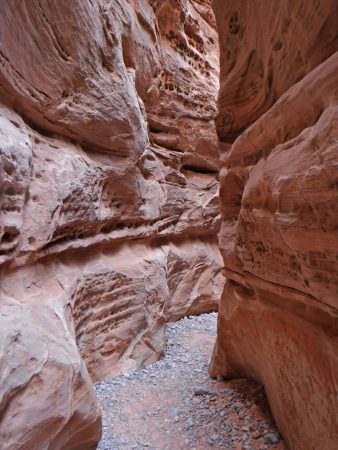 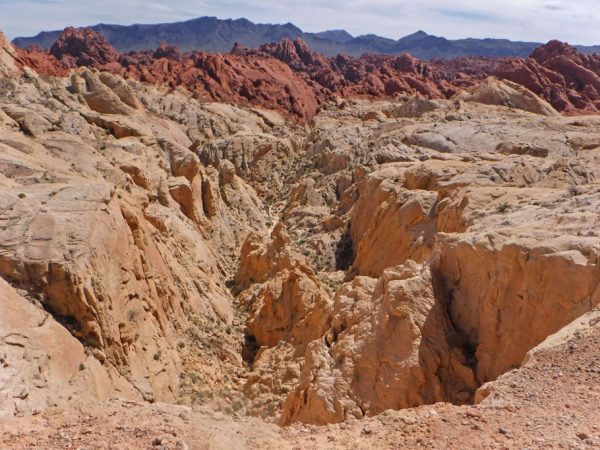 Here in Fire Canyon erosion has exposed two deep layers of sandstone. The red sandstone has more iron in it than the white sandstone. 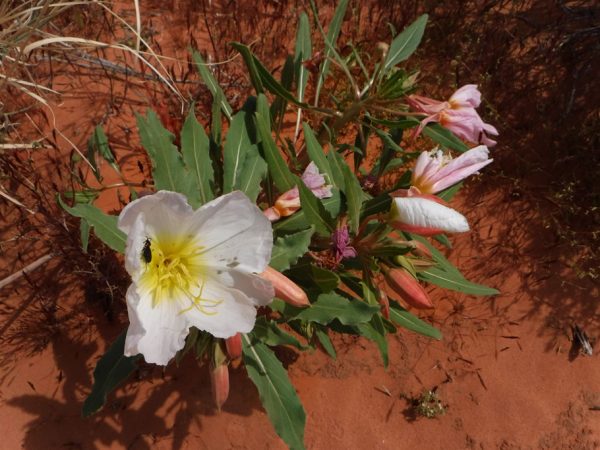 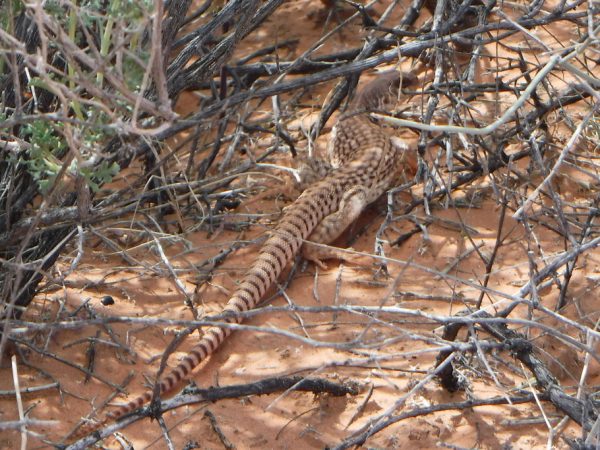 This Desert Iguana thinks it can hide in the undergrowth. 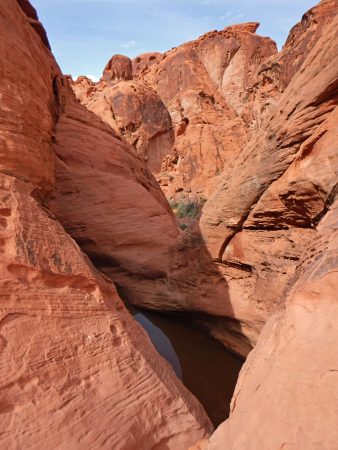 Water catch basin at Mouse’s Tank. The basin was named for Little Mouse, a Paiute renegade who supposedly hid out here after shooting two prospectors in the 1890s. 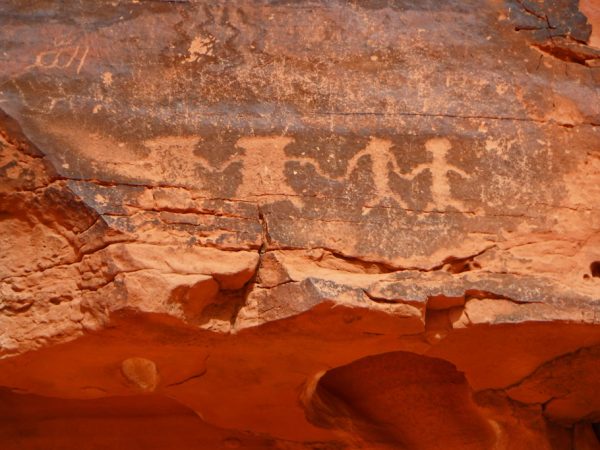 Petroglyph family along the trail to Mouse’s Tank. 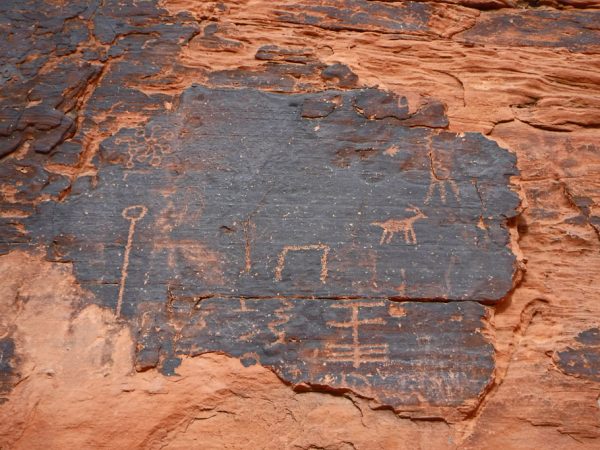 Curious petroglyph patterns on the trail to Mouse’s Tank. There is evidence that this area was visited by people between 300 BCE and 1150 CE. Some of those visitors left these images. 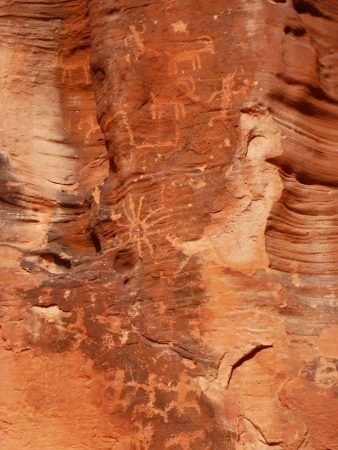 Bighorns, stars, and shamans are cut into the desert varnish that cover this canyon wall. 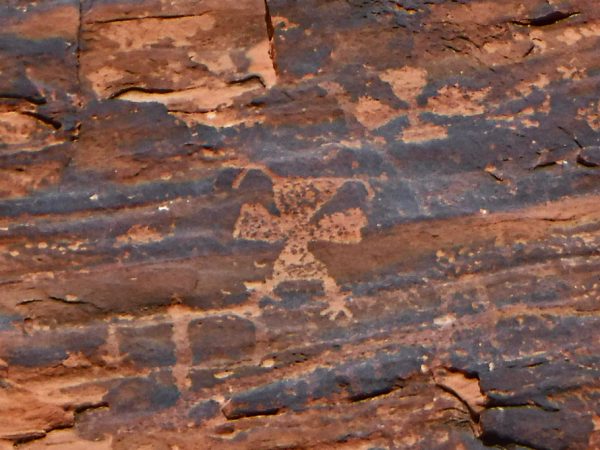 It’s hard to know what many of the petroglyphs represent. But this one is identified as Mystical Bat Woman. 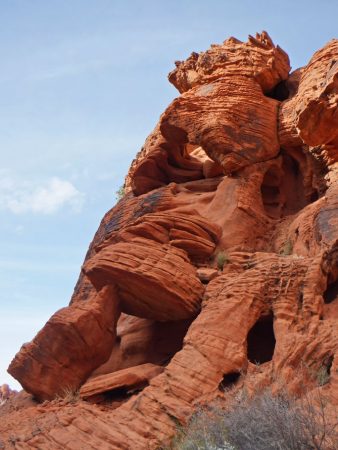 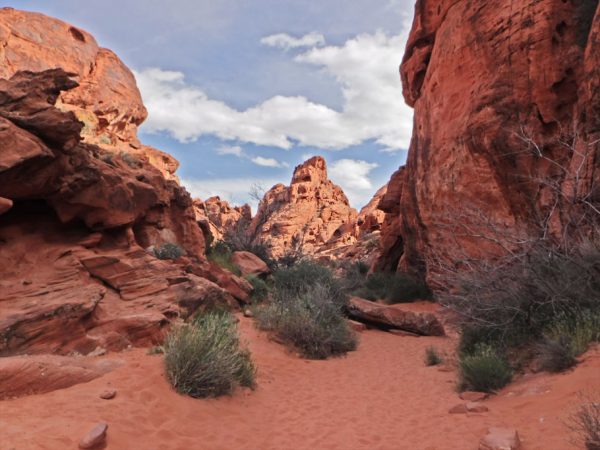 Another view on the Mouse’s Tank trail. 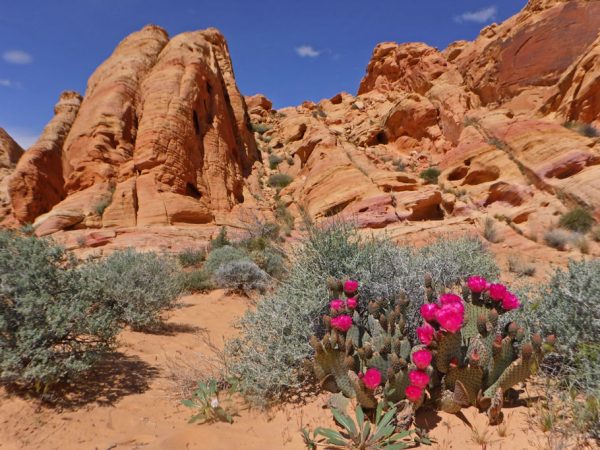 View of the Rainbow Vista trail. 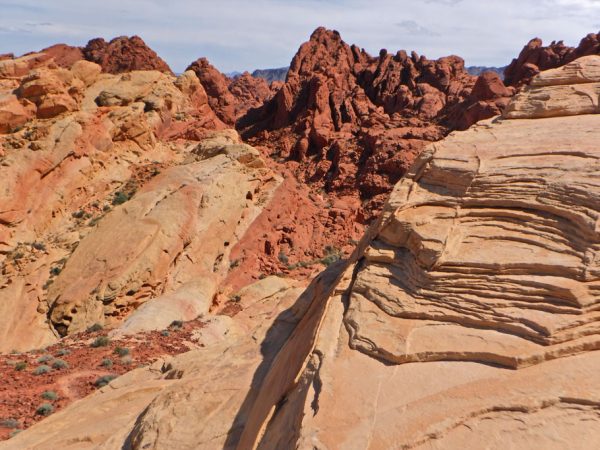 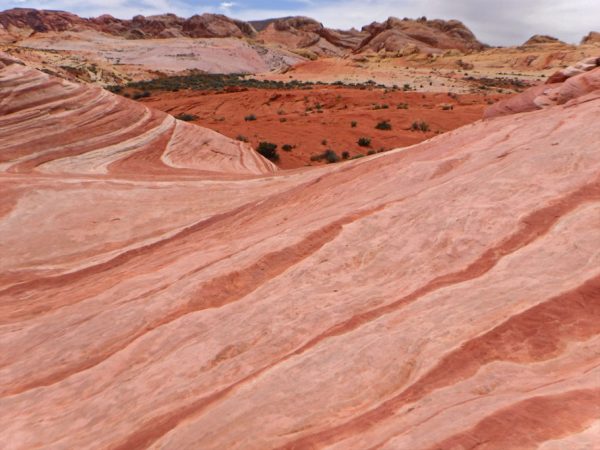 If you ever want to walk on a tsunami of fire, come to the Valley of Fire. This is one shot of the Fire Wave. It’s hard to capture in one photo, so there are more. 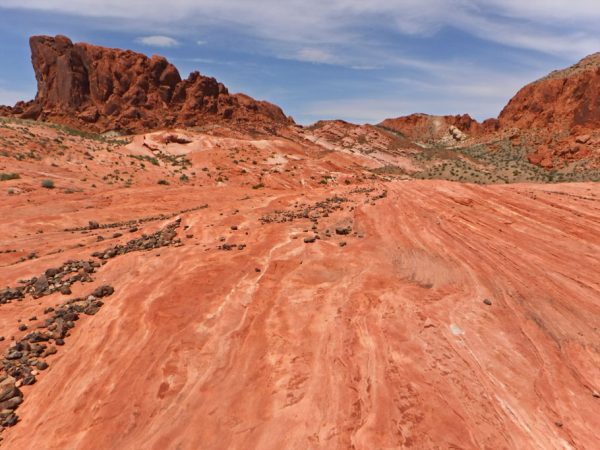 Multi-colored swell of the Fire Wave behind its crest. 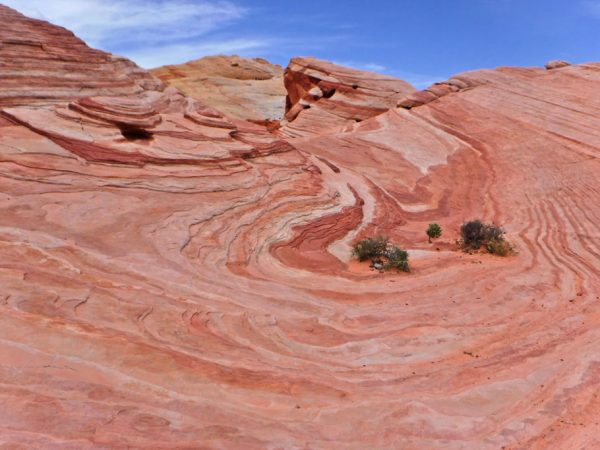 It took 150 million years to lay down and compress the sediment that forms the Fire Wave. It took much less time for wind and water to polish off the surface.

Panorama of the Fire Wave. 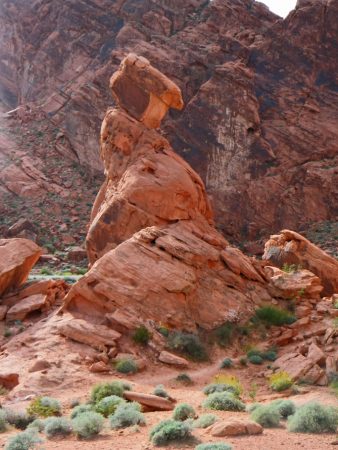 In Valley of Fire, Balance rock looks as though it could slide off any moment. 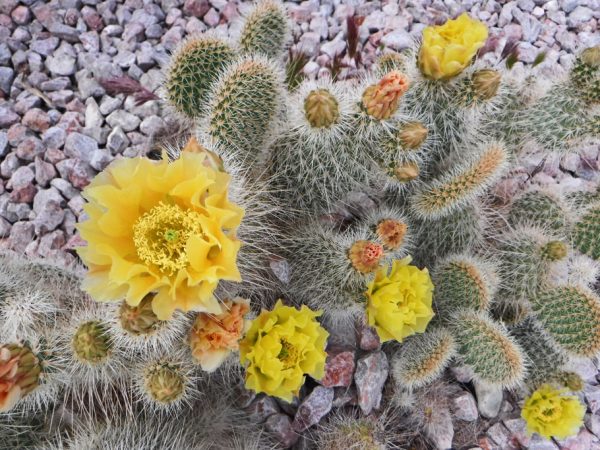 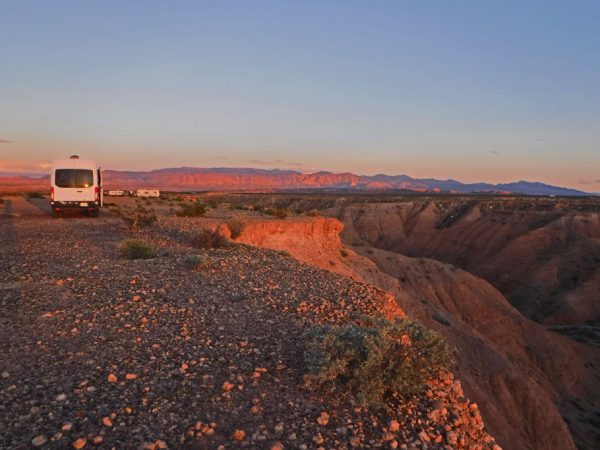 After our hot showers and night of camping in Valley of Fire we spent a night back at Poverty Flats. Sunset at our campsite — Close to the Edge.

10 thoughts on “The Valley of Fire”