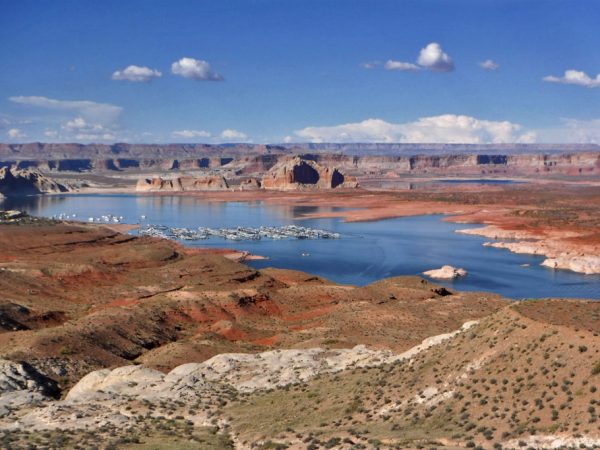 One of the highlights of the Glen Canyon Recreation Area is the glassy waters of Lake Powell. The lake was created by flooding the Colorado River running through Glen Canyon with the construction of a dam. It is named for explorer John Wesley Powell, a one-armed American Civil War veteran who explored the river in wooden boats 1869. This picture only shows a small portion of this second largest (right below Lake Mead) man-made reservoir.

Just a note for those who follow along regularly. I got behind. Like way behind. When we last left off it was April and Greg and I were trying to win the Wave lottery and exploring Kanab. We are currently back in Cabbagetown for the summer and just finished our first month of house sitting. Greg is in full swing painting houses. I could make lots of excuses for dropping the ball on keeping up with the blog but I’m sure you don’t really want to hear them. Anyways- I am still determined to document all of our travels so we are picking back up where we left off way back somewhere traveling around in the southwest desert…

Glen Canyon is a National Recreation Area in Arizona on the Arizona/Utah border. We had never heard of it until we passed by it two years ago as we were traveling from the Grand Canyon to Utah (there would be a link here to that trip if I wasn’t so terribly behind on those blog posts about our first year on the road in Ballena Blanca). We had no plans to stop since we had been totally unaware of its existence but when we saw the visitor center we decided to check it out. The visitor center overlooks the Glen Canyon Dam which forms the vast Lake Powell. We perused and took some pictures of the displays about the dam inside the center (And if I ever write that blog post, you will get to see some of those pictures). We also strolled around a bit outside taking more pictures of the dam and the lake. As I pointed my camera towards the water I saw some houseboats cruising across the lake and thought, “This place would probably be really fun to explore by boat.” Unfortunately, the only boat we had at the time was in Florida, quietly draining money out of our pockets as she patiently waiting for us to give up this vanning whim and return to throwing money at her.

Two years later we found that we would be passing through Glen Canyon again and this time I was prepared. Our sailboat was long gone but now I had a nice, little, and much less demanding boat neatly folded up under our bed. “Perhaps there is some good kayaking in Lake Powell,” I wondered as I looked at my online map. So I searched on the internet and found out that although there are lots of places to kayak on the lake, the place with the most convenient access would take us into Antelope Canyon.

Located on Native American land near the Glen Canyon Recreation Area, Antelope Canyon is a big draw. So big that you can’t hike the canyon without hiring a guide or going on a paid tour. Except for the entrance fee to the Marina where the boat launch was (which was covered by our new National Park Pass we had just bought in Kanab), kayaking into Antelope Canyon would not only be free for us but inflating the kayak one more time would bring our per-use expense for it down just a little bit more, we could experience the canyon at our own pace sans a guide and other people, and it would make me once again glad that I spent so much time last summer trying to figure out how to fit a sturdy two-person kayak into Ballena Blanca.

Besides the kayaking, we found a few other things to do in the Glen Canyon area. We went on a few hikes, did a bit of lake and river gazing, took the dam tour, spent a day doing chores and laundry, and took a few $2 showers.

We passed up one of the other big attractions to the area – Horseshoe Bend. Perhaps you have seen pictures of this site on Instagram or on the screen saver for your Apple TV. It is quite stunning and very popular. The attraction is free and only just a short hike from a ten dollar parking lot. I don’t think I would have cared too much about the parking cost if there weren’t hundreds of cars already parked in it when we passed by. I’d rather just stay off the beaten path which, of course, is why I have a kayak folded up under my bed.

* Click pictures to enlarge and view in a slideshow. 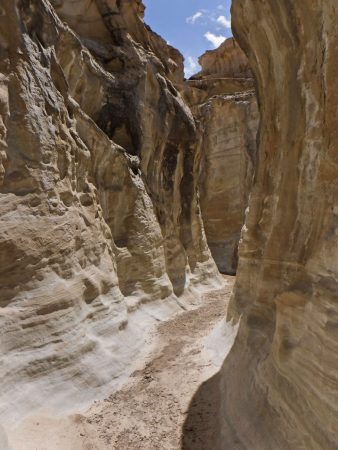 There isn’t a lot of hiking at Glen Canyon but if there is a trail to be hiked we will find it. We drove a little bit up the road back towards Utah to find Wirepass Canyon. 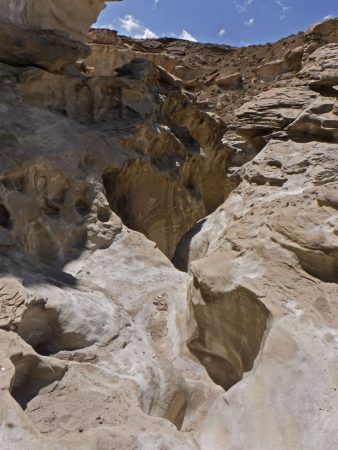 Mostly the hike was pretty easy but some parts of it were a little tricky. We hiked down through this part of the canyon on way out but found an easier bypass on our way back. 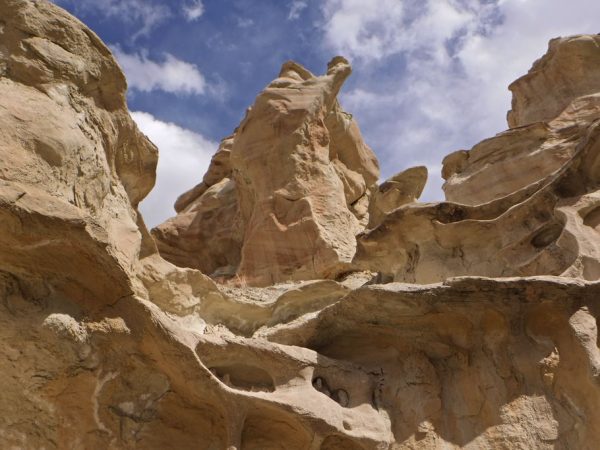 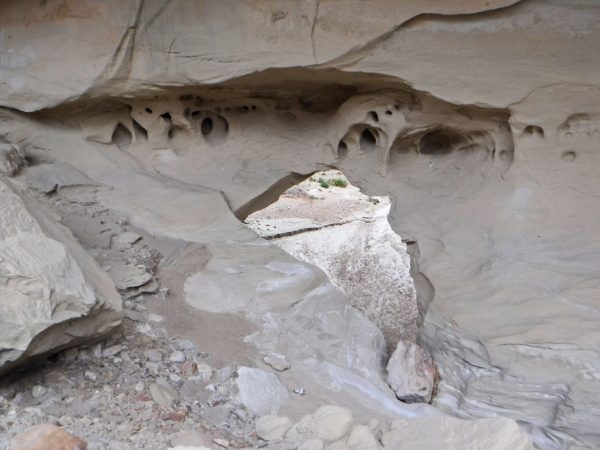 The trail was an out and back. We turned around at this natural bridge. 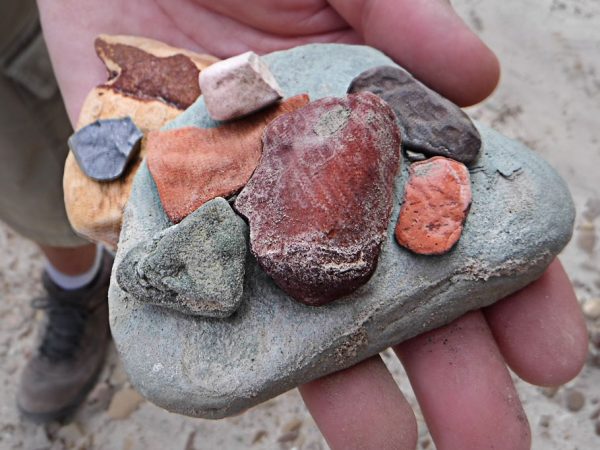 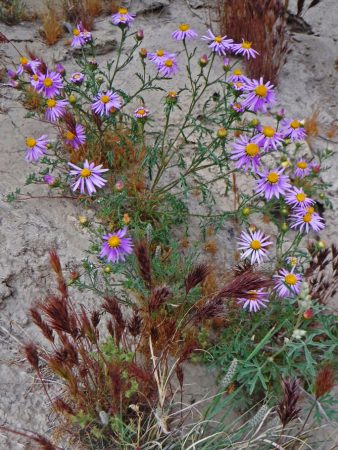 Blooms on the trail. 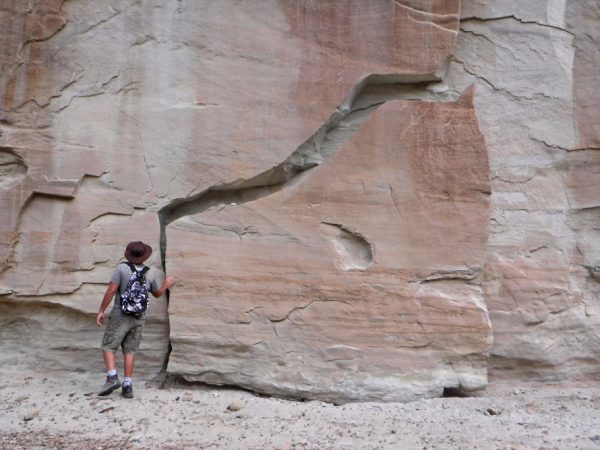 Some of the most interesting rock formations were the “broken” ones. 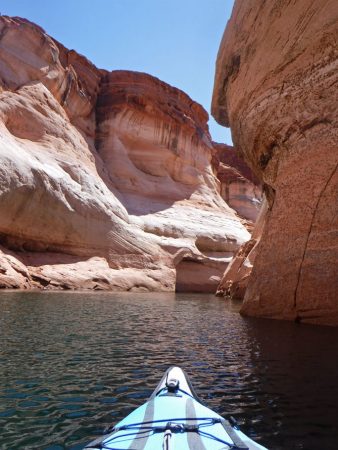 The idea of kayaking a slot canyon was pretty exciting. We were worried that it might get a bit narrow but it never got too narrow that we couldn’t turn around. 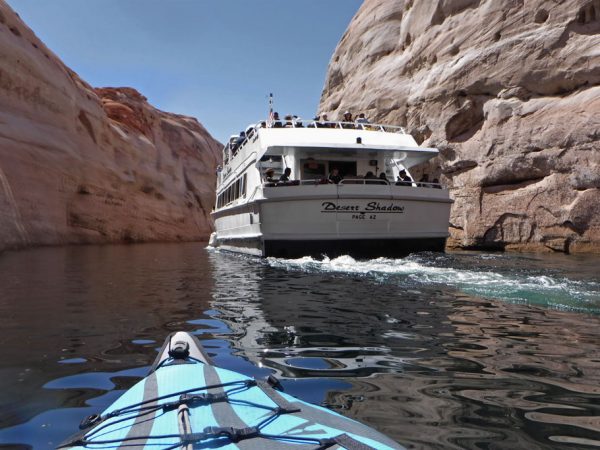 In fact, it was plenty wide enough for tour boats to cruise down even though they passed pretty closely.

Before our trip, we studied the map a bit to figure out how far we wanted to go down the canyon and where the best place to turn around would be. It was wasted time. During our visit to the lake the water level was probably at the lowest it will be all year – around 40 feet lower than the current lake level. Our paddle abruptly ended at this beach. 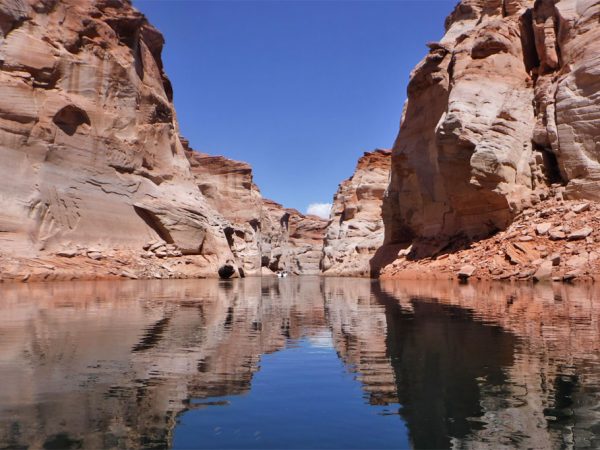 The water was glassy on our paddle back. 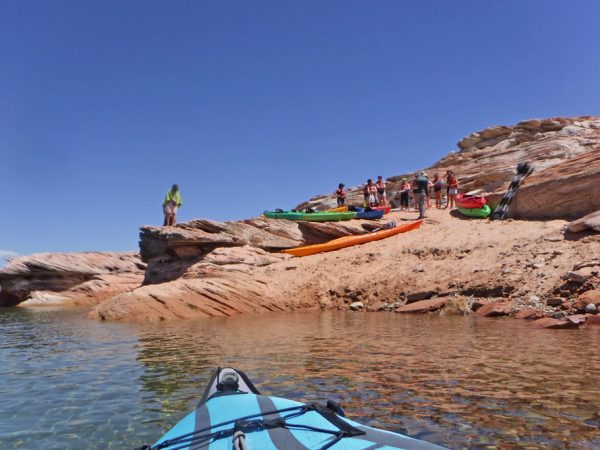 The kayak launch. Because the water was so low the regular boat launch for bigger boats was closed but kayakers were still able to walk down this hill to put in the water at the Antelope Point Marina. 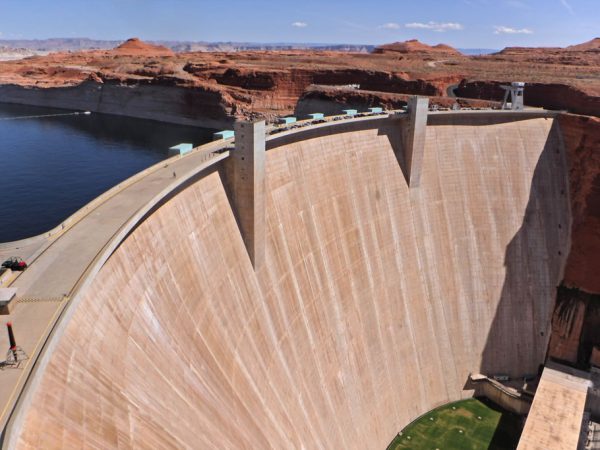 Construction started on the dam in 1956 and lasted for ten years. First, water diversion tunnels were blasted out on each side. Completion of the bridge in 1959 speeded the construction process in this remote area. In 1960 the process of pouring 400K 24 ton buckets of wet concrete started, and ran 24*7. The dam is 100′ thick at the top and 300′ thick at the base. In 1963 crews started installing the turbines. The dam was dedicated by Ladybird Johnson in 1966, but it took another 17 years for the Colorado river to bring it to “full” level (560′ at the dam’s face). 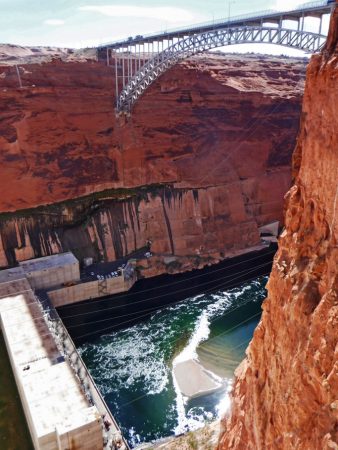 Looking from the dam to the bridge. A net was suspended below the bridge as it was being built (saving three lives). Before it was completed construction crews had to drive up to 200 miles to reach this site. Now the nearby town of Page is a vacationer’s destination. 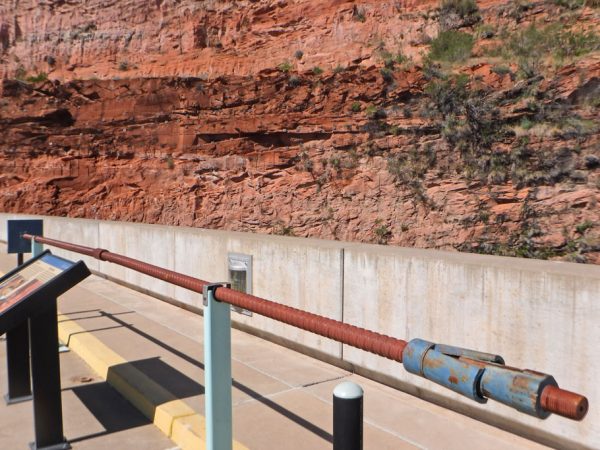 Rock Rods. These rods can be up to 75′ long. Holes are drilled into the canyon wall and rock rods are screwed in. The flared tips at the end hold a 1′ sq. plate that helps keep the canyon wall from flaking away. Several men died hanging over the cliffs, installing these. 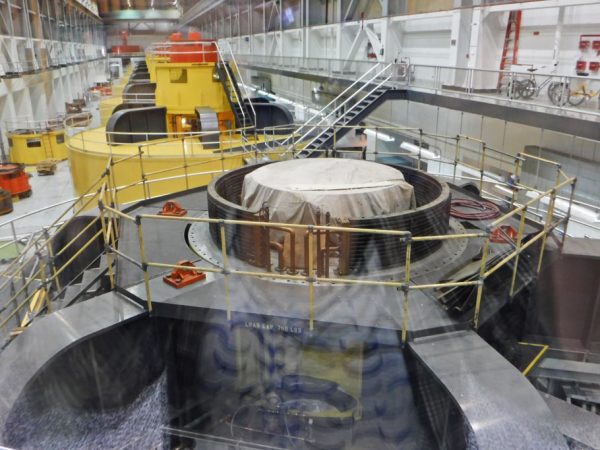 The eight turbines in this dam generate 1.3M kilowatts at capacity. The turbine in the foreground is undergoing routine maintenance. Its red 40 ton steel shaft and housing are far in the distance.

“Blown Fuse”. Power from one of the turbines surged and caused this strip of conduit to explode. Here’s what’s left. 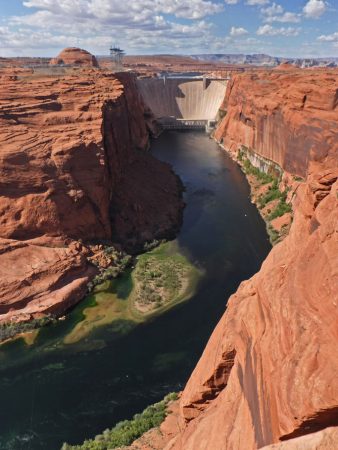 A view of the dam and the Colorado River. 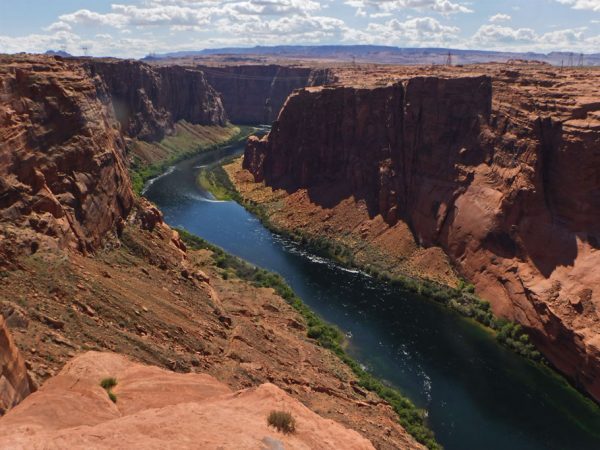 The Colorado River winds down river away from the dam.

Hike to the Hanging Gardens 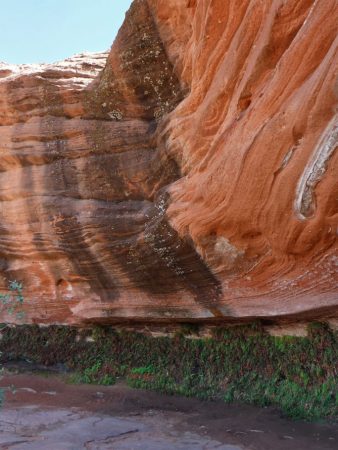 On our last day at Glen Canyon, we did a short hike to the Hanging Gardens. A seep spring keeps this wall of Jurassic Navajo sandstone lush.

View from our hike to the Hanging Gardens. 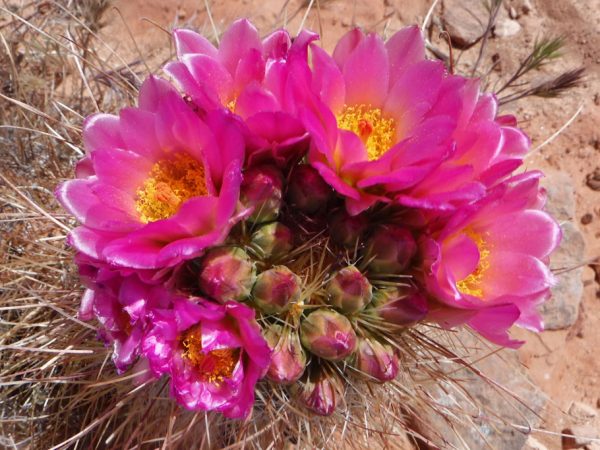 10 thoughts on “Kayaking in Glen Canyon”