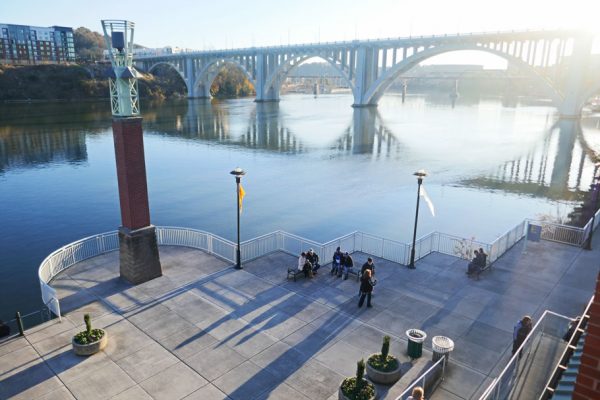 We stopped by Volunteer Landing on the Tennessee River in Knoxville while we were visiting our friend Gayden.

On November 5th we found ourselves at Greg’s parents’ house in Denver, NC – again – the third time in one month. We assumed that by this time we would be somewhere in the midwest visiting friends along the way as we headed to the southwest. But as you know if you have been following along we had van trouble (a troublesome torque converter). We were back at Greg’s parents’ house one more time (after a quick jaunt up through Virginia and Maryland and on to Pennsylvania visit family) for the fix – which just involved a few days in the shop and a little lightening of our bank account. The torque converter repair, a birthday, bad weather, and finally waiting for a part for a last-minute van project kept us in town a bit longer than we hoped. But eventually, our part came in, and we made a quick install. We hit the road as the sun was setting, eager to start our journey, that same day.

Now it was November 14 and the midwest was no longer in our path to the land of wide-open spaces, cactus, and sunshine. I had concocted a new route to warmth and adventure. First stop, just over the mountain to the west, Knoxville, TN.

There is a National Park site, The Manhattan Project National Historical Park at Oak Ridge, just outside of the city. We had been wanting to visit it for some time. And, even better, we wanted to visit Gayden. Gayden, one of our good friends from Cabbagetown, moved to Knoxville some years ago. This would be our first chance to see him in his new home.

* Click pics to enlarge and view in a slideshow. 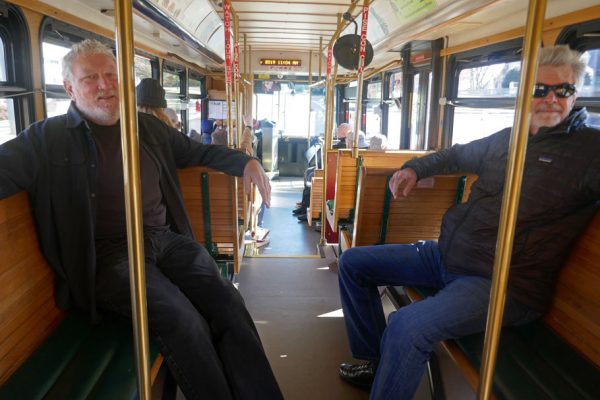 We asked Gayden to show us his Knoxville. The day started out with a free, short (we could have walked) trolley ride downtown. 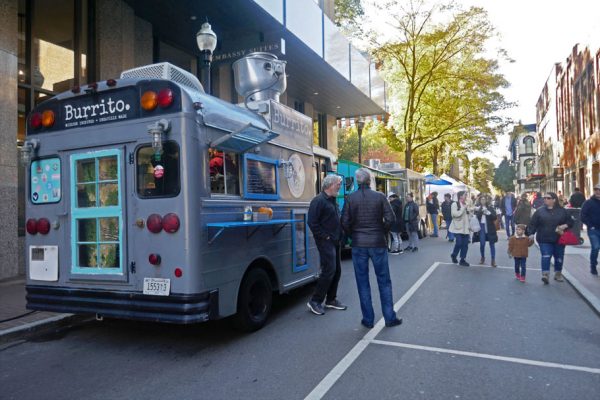 The first stop was lunch at a food truck and the Saturday market. 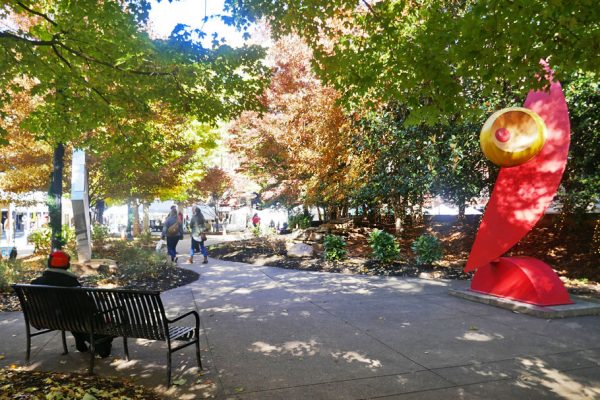 We took a stroll through Charles Krutch Park and looked at the many public art installations. 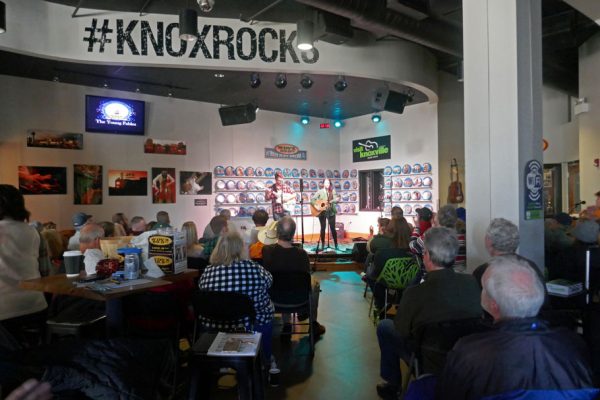 Then on to the WDVX radio station/visitor center, where we caught the live daily Blue Plate Special. Every day (except Sunday) WDVX hosts a free concert of local and international artists at noon. The show started out with a country duo, The Young Fables from nearby Maryville, TN. 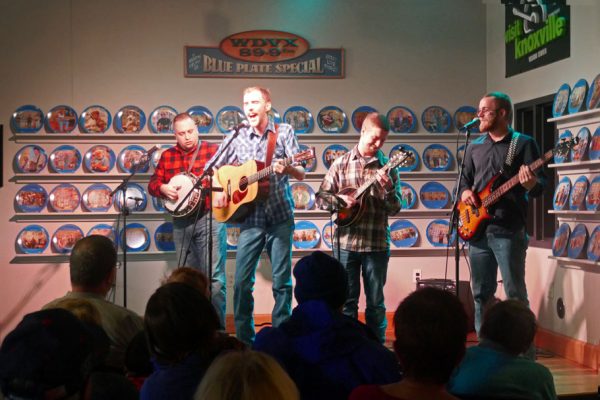 The Young Fables were followed by The Steel Blue Bluegrass Band. 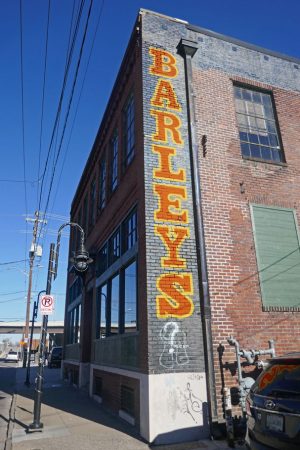 From downtown we walked to Old Town and stopped by one my and Greg’s favorite Greenville, SC restaurants – Barley’s Taproom and pizzeria. On Fridays, WDVX brings their Blue Plate Special to Barleys for the for “The Big Plate.”

Outside of Barley’s we found this music mural entitled “Knoxville Music History” by the artist Walt Fieldsa. Included in the mural are famous and lesser-known Knoxville musicians. Can you spot Dolly Parton, Chet Atkins, The Everly Brothers, or Sergei Rachmaninoff? Do you recognize any of the other musicians in the mural? (click pic to enlarge) 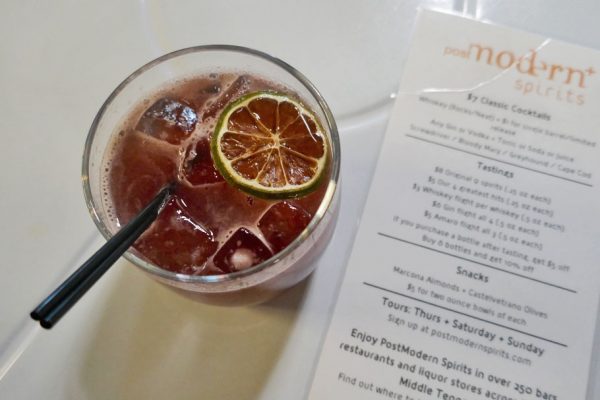 Before we stopped off at Barley’s we dropped in at PostModern Spirits, a craft distillery where they create and bottle their own liquors, for some fancy drinks. Gayden’s favorite bartender wasn’t there and the bartender on duty didn’t know the recipe for what Gayden only knew as “the drank.” Luckily she was there on our second pass and we got to try this special spicy concoction. 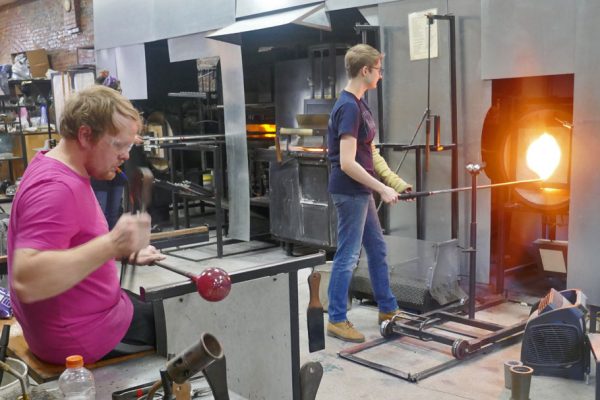 Heading back towards downtown we wandered into the Pretentious Glass Co. where we watched a glass blowing demonstration. 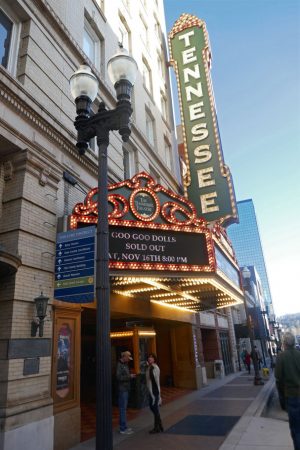 Back downtown we passed the Tennessee theater all lit up for the evening. 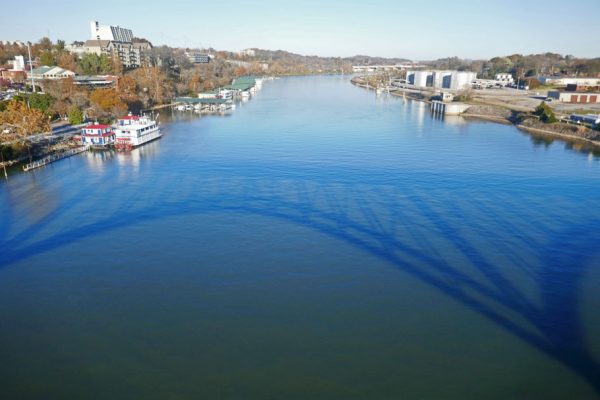 Almost back to where we started we strolled along the Tennessee River which Gayden’s condo overlooks.

This National Historic Park has three locations across the country. We visited the Los Alamos location in New Mexico this past spring. Los Alamos is where the physicists designed and built the atomic bomb. This location in Oak Ridge, TN is where the uranium was enriched and plutonium was produced.

A three-hour tour of the Oak Ridge site was included with tickets to the American Museum of Science and Energy. Only two tours were offered a week, on Monday and Friday. Seating was limited, and sign-up for the tour was only available the morning of the tour at the museum. We arrived as soon as the museum opened, and stood out in the cold with a handful of other science enthusiasts to ensure our spot on the bus. 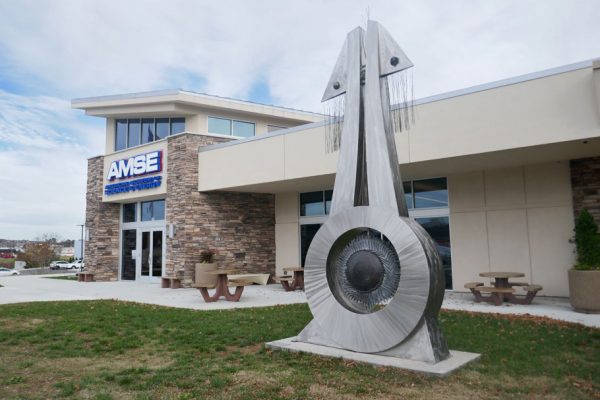 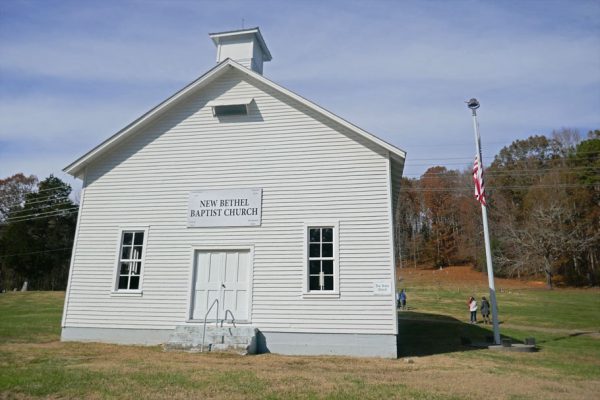 In 1942 General Leslie Groves, military leader of the Manhattan Project, chose this area in TN for uranium enrichment. Around 59K acres of land were purchased from the local farmers. Most existing buildings were razed, and a new secret city was built. Electricity was provided by the nearby Norris Dam, a 1930s TVA project. Groves allowed this church to remain standing. 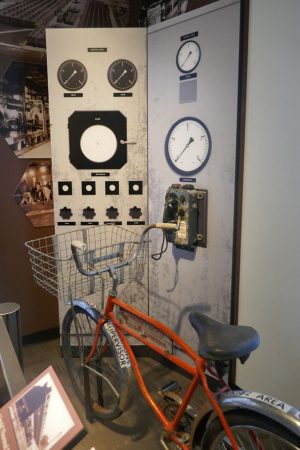 Four enrichment plants were built in separate valleys. One of these, the K-25 plant, was a mile-long U-shaped building. Workers got around in the building by bicycle. 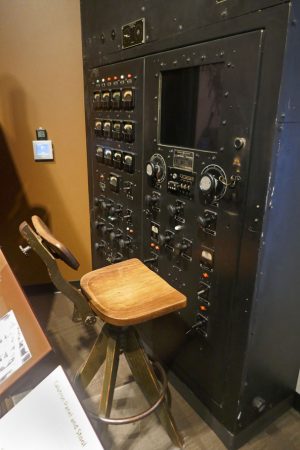 At the Y-12 plant, magnetism was used to separate the uranium 235 from uranium 238 in devices called Calutrons. The “Calutron Girls”, female high school graduates were hired to sit at stations like this and monitor and fine-tune the process. 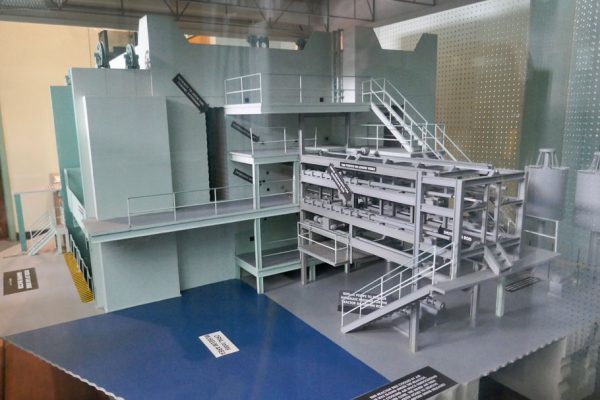 In December 1942, Enrico Fermi’s team in Chicago created a controlled nuclear reaction under bleachers at a football stadium. Control rods were slowly removed from a pile of graphite bricks containing uranium. An emergency shut-off was to be activated by a scientist chopping a rope if Fermi fell dead to the floor. This follow-up reactor in Oak Ridge was much safer. Here is the rear view of a model of the X-10 reactor. 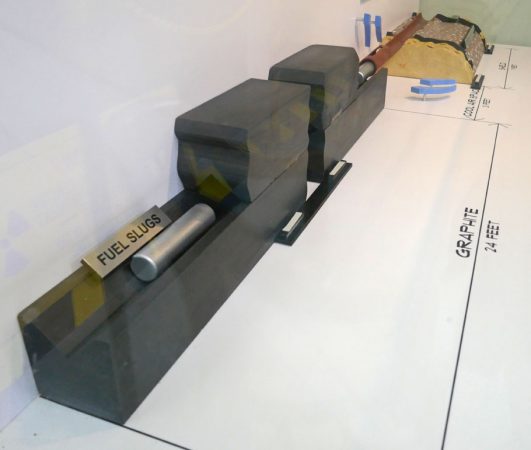 The pile here at Oak Ridge X-10 site was built using milled graphite bricks. Channels run through the bricks allowing slugs of Uranium to be pushed down the channels into the pile. 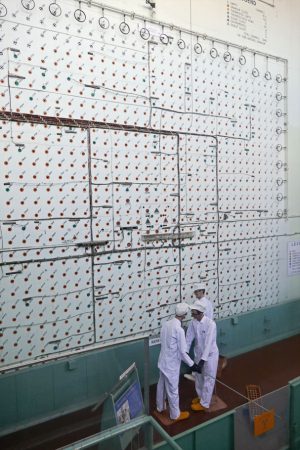 The pile was enclosed in a thick, concrete, air-cooled building. Teams of two used long rods to push the uranium slugs into the face of the pile. (Actual front of the reactor, with mannequins demonstrating.) 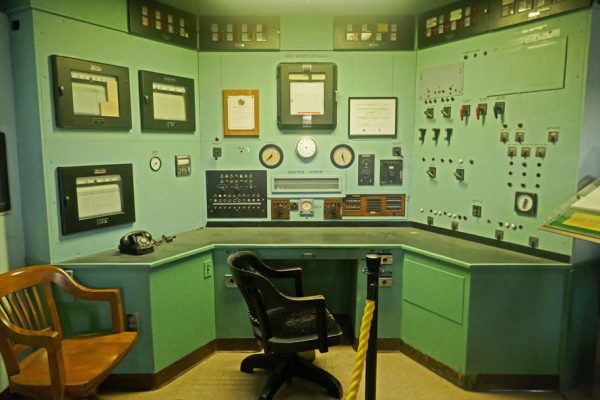 Radioactivity was monitored here in the pile’s control room. Initial loading started on the afternoon of Nov 3, 1943. No reaction was expected until the next day. 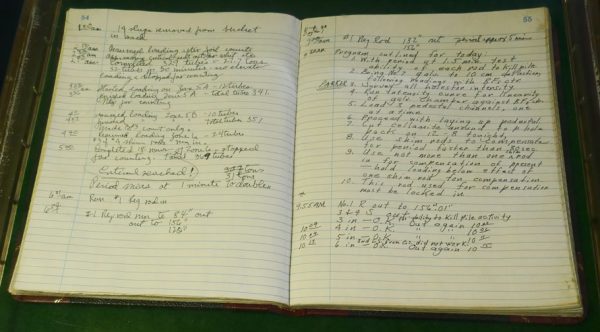 The control room logbook for X-10 reactor shows that a critical reaction was achieved at 5:00am, hours before anticipated. A messenger was sent to wake up the lead scientists. We had a process for continuous production of Plutonium! 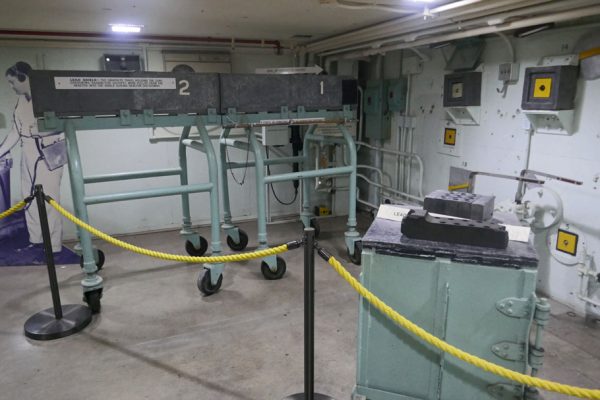 The X-10 pile was also used to create radioactive isotopes from other elements. The test elements were put into these black graphite containers and introduced through these holes in the side of the reactor. 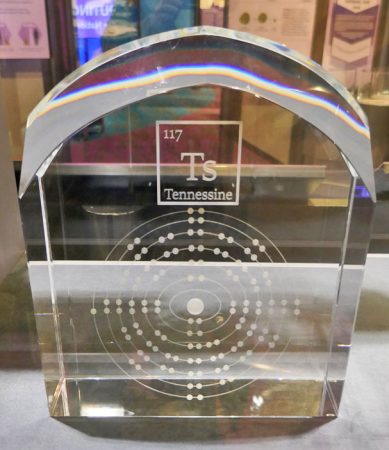 Element number 117, Tennessine, was named in recognition of the work done here at Oak Ridge. 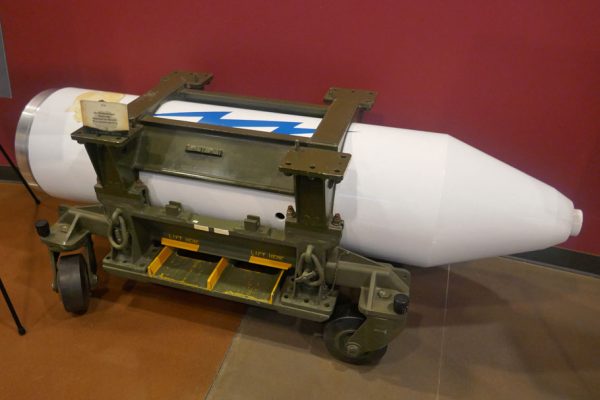 But, of course, the end goal was to provide enough enriched Uranium to allow fuel the bombs Los Alamos was making. Here is the housing for a post-WWII atomic weapon. 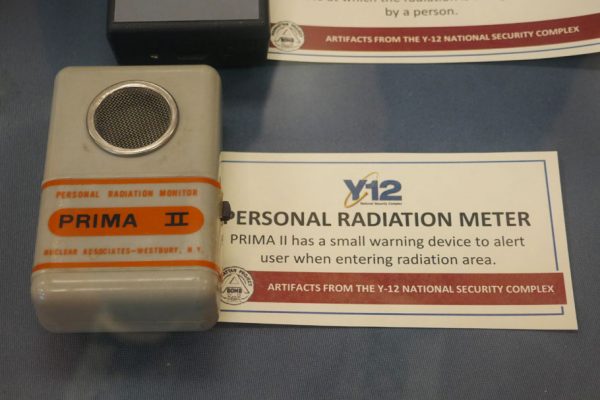 Workers at Oak Ridge were equipped with warning devices like this. 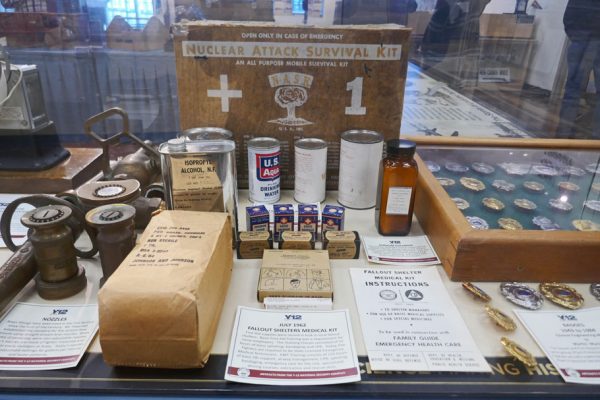 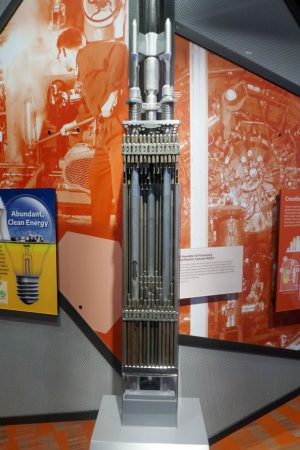 There are many “gee-whiz” displays inside the AMSE. Here is a section showing control rods that get inserted into water reactors. (Greg once wrote programs to help track uranium through a fuel rod production process.) 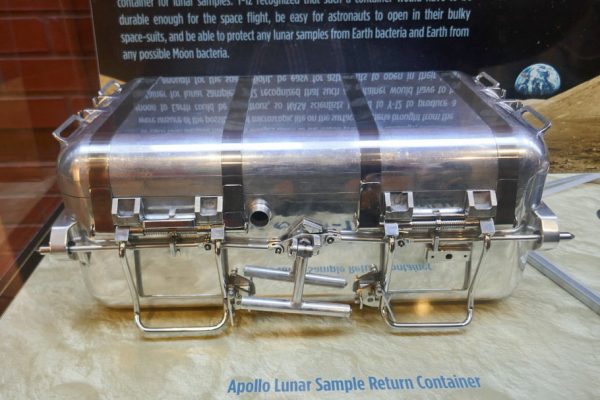 Since Oak Ridge was good at making containers for hazardous materials, NASA had them make these moon-rock containers. Who knew? Lunar rocks might have contained hazardous bacteria.

Here is a 3-D printer in use at AMSE’s gift shop. Work using additive manufacturing techniques is being done at Oak Ridge now. 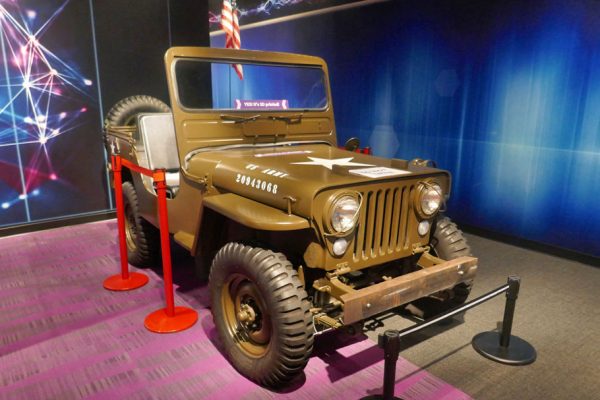 This electric-powered Jeep replica was created by 3-D printing. One like this pairs with a 3-D printed tiny home. The home is solar-powered, and has a parking pad out front. The Jeep gets charged wirelessly from the parking pad. 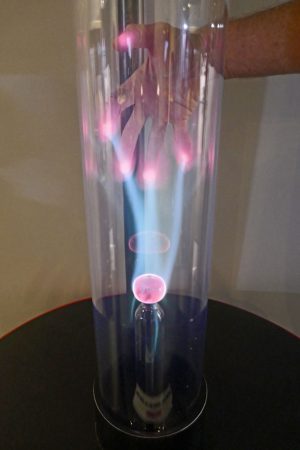 Demo at AMSE of how the fourth state of matter, plasma, behaves.

What’s your favorite musical town? Have you visited any of the Manhattan Project Historical Park Sites?

8 thoughts on “Knoxville Rocks and Bombs”