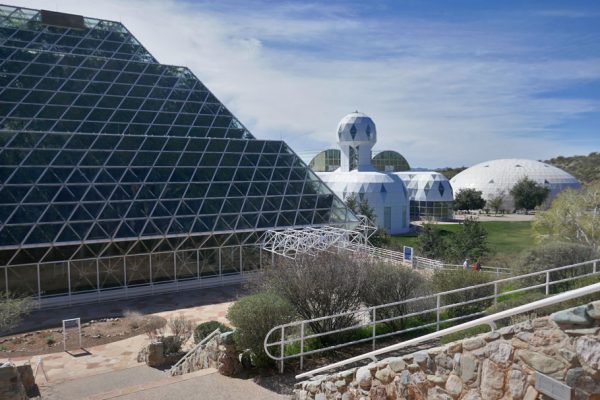 Buildings of the original Biosphere 2.

Over the last three years that we have been visiting Tucson, I have been seeing signs advertising the Biosphere 2. I lived in Tucson some 30 years ago when this biosphere was being built. It is a much much smaller version of the biosphere we all know and love – you know, the planet Earth. It was very controversial back then – the cost, the unclear mission, the wacky people in charge – but in 1991 eight people entered this great glass structure containing a pared-down Earth and were locked in for 2 years.

The experiment was a bit of a flop and since then the property has had a few different owners. Currently, it is owned by the University of Arizona. It is no longer a closed environment. They do some experiments but it seems like their main mission now is to mostly do tours. The tours cost a bit more money than we usually like to spend ($21 a person) but we have been loosening up the entertainment dollar lately and decided to see what it was all about.

A couple of friends joined us on this excursion. It was the first day of March and we were starting to hear a lot more talk about COVID-19. As we drove to the biosphere location way out in the desert we joked that it would be the perfect place to be quarantined if all hell broke loose. After all, 8 people lived in this place totally isolated for 2 years, right? We were disabused of this notion pretty quickly.

I’ll let Greg tell the rest of the story…

Biosphere 2 was the brainchild of Ed Bass. Since we heard conflicting stories about its purpose, I did some reading and found this interview with him. It doesn’t sound as though there was really a mission statement for the project. Scientific experiments were part of the effort, though. And the place does look techno-cool!. 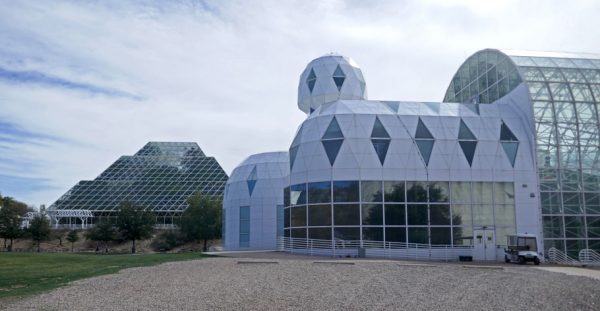 For two years, starting in 1991, eight people were locked into the facility. They were supposed to live in and maintain the environment, and do experiments. Crops failed, oxygen had to be pumped in. The Biopspherians spent so much time on crops and maintenance there was no time for experiments. A follow-up was attempted in 1994 but aborted after six months. Replicating the parts of Earth we need for survival was an ambitious project. For me, the lesson is that we need to take better care of Biosphere 1. 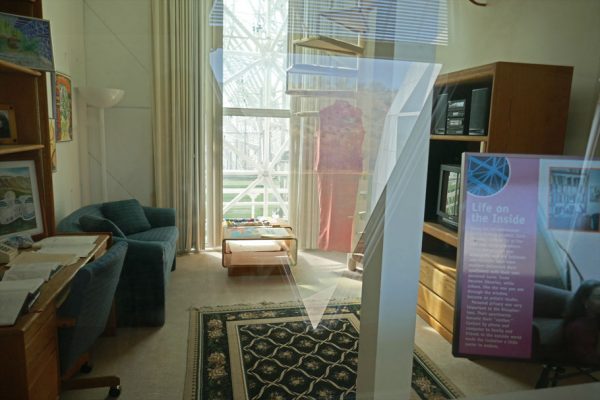 Each Biospherian had a bedroom in the living quarters. Here is one of them. 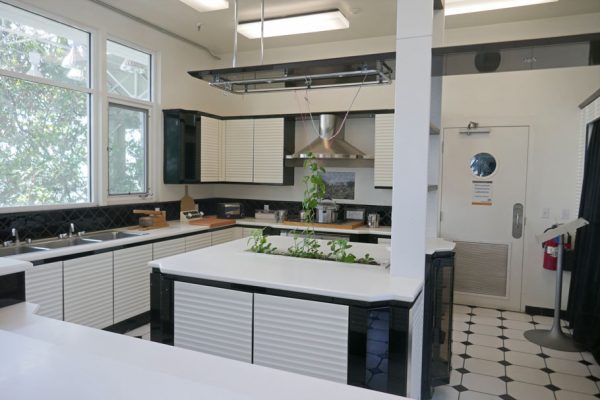 The eight Biospherians shared this kitchen, taking turns preparing meals. Every eight days it would be your turn to cook three meals. 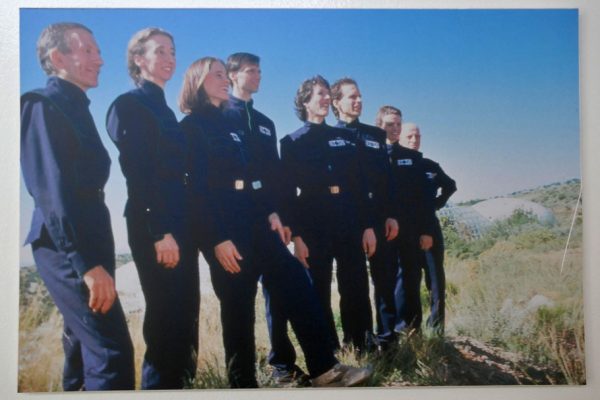 Here’s the original team of Biospherians. I wonder if they are all still on speaking terms. 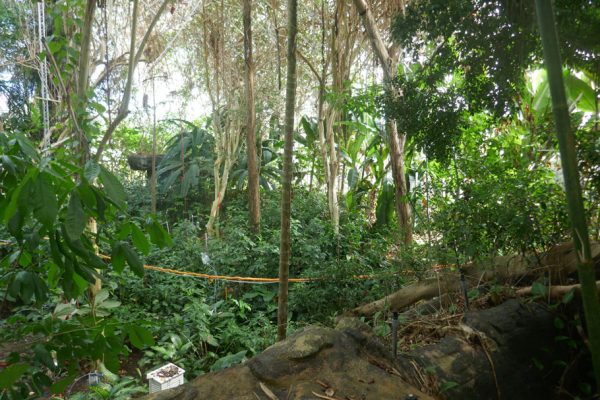 The Biosphere is split into eco-zones. There is a rainforest, an orchard, a desert and an ocean. Here is the rainforest, where trees can grow to 90′ tall. There are wires strung throughout the facility now for experiments. 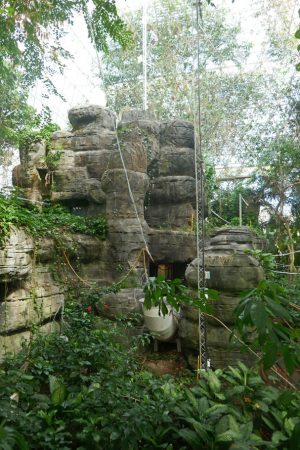 The cavelike openings are really air vents for circulating the atmosphere in this airtight facility. 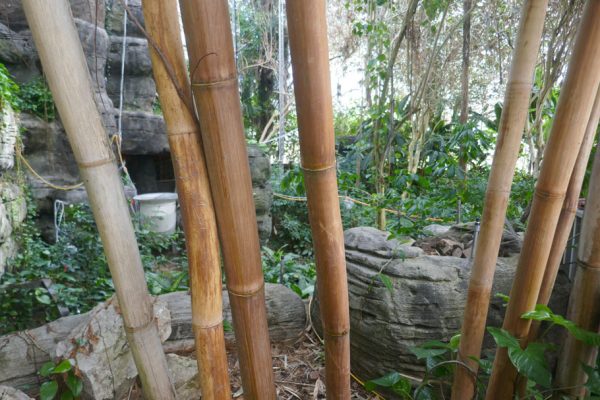 Now there is a wall separating the rainforest from other areas. When the Biospherians lived here a thick copse of bamboo was used as a wall. Most of it has been removed now, but some remains. Also, many walkways have been added. 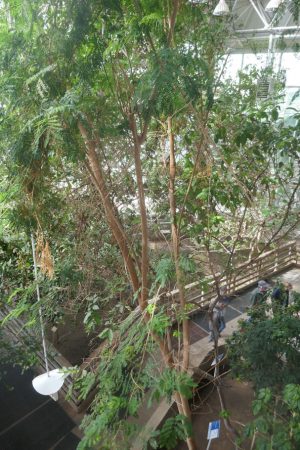 In the bottom right is the lone coffee tree. These lucky folks could have a cup of coffee whenever there were enough beans for the whole crew — about every two weeks! 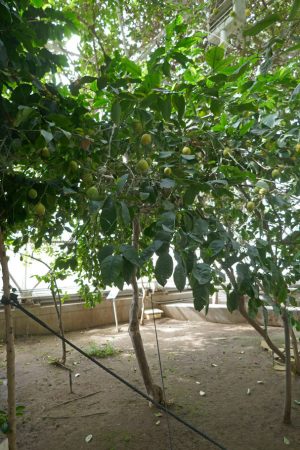 “Candy Store” in the Biosphere. Citrus fruits were the closest thing Biospherians had to sweets. 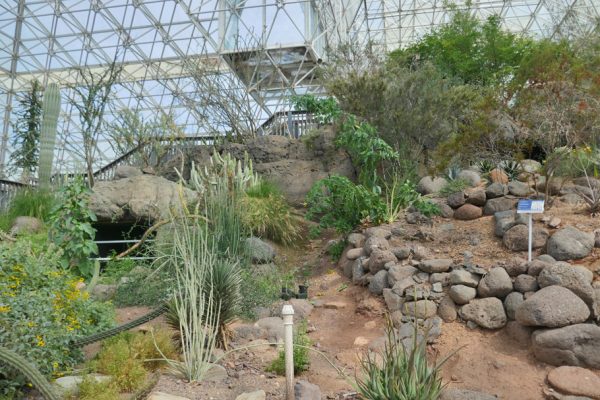 Why would you fill an enclosed habitat with the same plants that are out in the surrounding desert? The stomata of desert plants absorb carbon dioxide (C02). They stay closed during the day to keep moisture in the plants. At night, during Biospherian sleep time, the stomata open. They absorb CO2 and keep the atmospheric levels in balance. (Photosynthesis occurs the next day when the plants are exposed to sunlight. ) 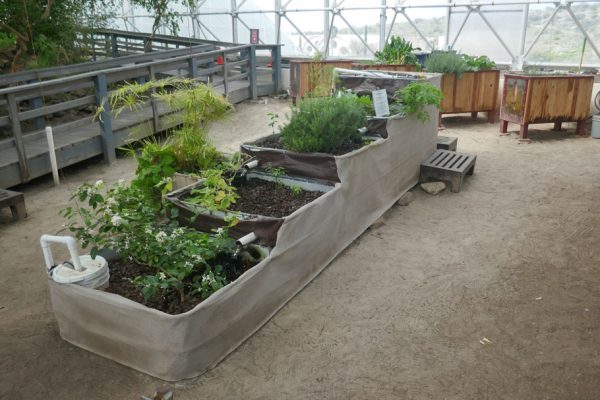 Aquaponic garden in the foreground. The “soil” is just lava rocks. Fish live in the upper tank. Their waste fertilizes the plants. Water is pumped from the bottom to the upper tank, so it is constantly in motion. In the back are clay pot (olla) gardens. Water can slowly seep through the clay ollas into the surrounding soil. Both techniques can produce vegetation with minimal use of water. 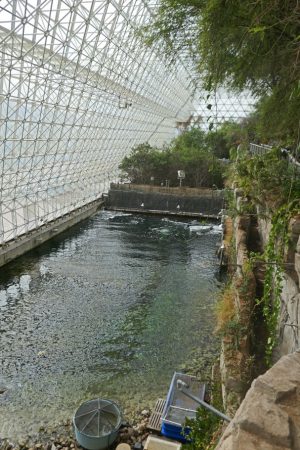 Ocean biozone designed to mimic the Sea of Cortez. The shore is near the bottom of the picture. The far end is 22 feet deep. A wave machine keeps the water moving. Initially, there was a living coral reef near the center and the water was crystal clear. But coral needs ultraviolet light, which is screened out by the windows here. The reef has been dead for a while, but resurrection experiments are being done now. 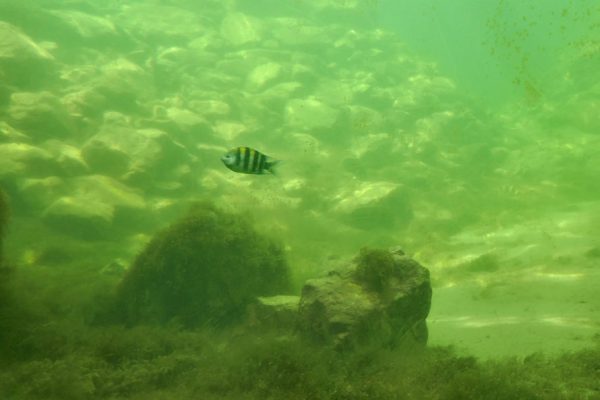 Looking from underground into “The Ocean”. NOT crystal clear now! There is a museum, though, with numerous displays of wildlife found in the Sea of Cortez. It compares the findings of a recent survey to those of the expedition John Steinbeck documented in the 1951 book “Log From the Sea of Cortez”. 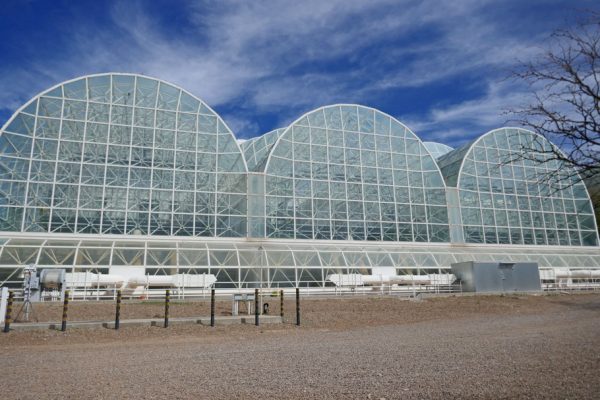 The home of the ten year LEO study. LEO stands for Landscape Evolution Observation. Each of the three rooms is floored with volcanic powder or naked “soil” and lots of sensors. Now the soil contains microbes, but plants will be introduced later. As the soil evolves changes can be introduced and controlled studies can be done. 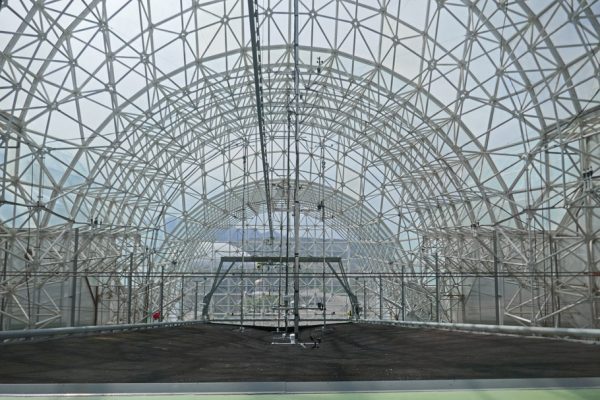 Inside one of the LEO chambers. 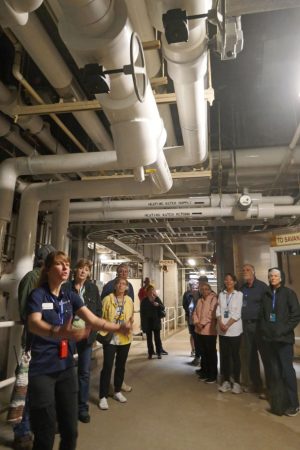 Inside the “technosphere”. This lower floor runs under each of the eco-zones. Air and water circulation are driven from here. Power comes from an external source (not solar or wind). 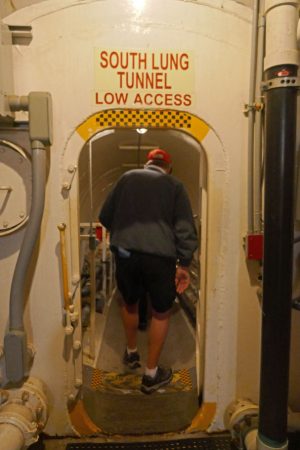 Entrance to “The Lung”. Watch your head. 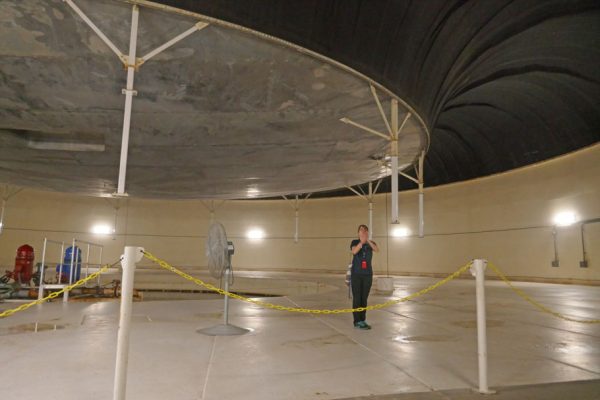 Inside the “Lung”. Designers knew that air pressure would fluctuate dramatically inside an airtight structure made of windows. Without the lung, it could explode or implode at any time. The roof of this circular room is made of a flexible combo of metal and Hypalon. It is held up by air pressure. When the facility is hot, expanding air raises the roof. The roof drops when the Biosphere cools. When the Biospherians lived here there was no central support or pit in the center. The roof could drop all the way to the floor. 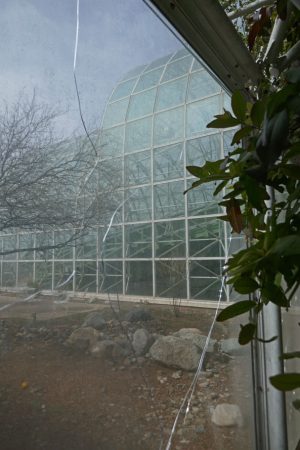 Cracked window. Did a bird fly into it or did The Lung fail? 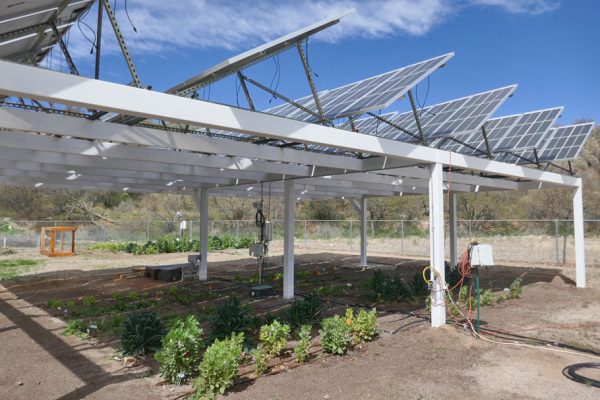 Solar panels lose some efficiency when they get hot. Here an outdoor “symbiotic” experiment is set up. Plants under the panels will get a break from direct sunlight. The oxygen they release should help cool the panels, making them more efficient. Stay tuned for the results! 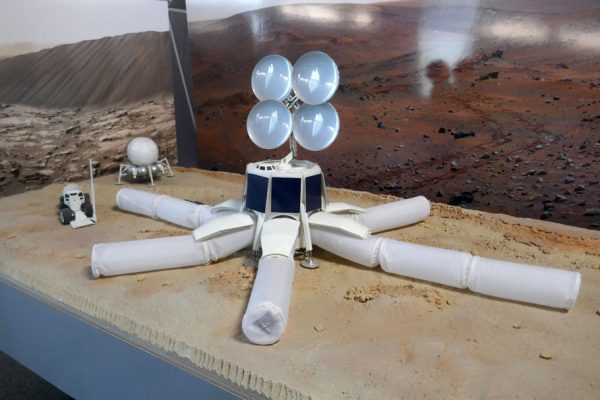 Model of a possible Mars biosphere. Looks kinda cramped. It’s our hope that these pictures of Biosphere 2 will make you feel a little less claustraphobic as you practice your “social distancing” in Biosphere 1. Bye for now, fellow Biospherians.

What is your favorite sciency place to visit? Do you think you could live in a closed environment with 7 other people for 2 years? Do you feel like you are facing that prospect right now? Let us know what how you are doing with your own social distancing. Leave us a comment below.

2 thoughts on “The Biosphere 2”