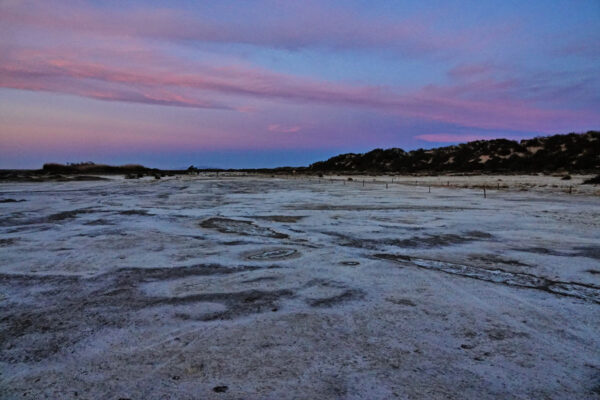 We love to get off the beaten path. And despite the over development of a lot of Baja and the growing popularity of the peninsula with travelers, if you’re willing to drive down a few dirt roads there are plenty of places to get away from it all.

* All pics are click to enlarge. Once you have them enlarged you can view them in a slide show. Also, you can hover over the pics to see captions.
** And as always, there are an awful lot of pictures. If you are reading this in an email, it is probably pretty long. The photos are more artfully presented on the blog. Click here to see the post on the website.

After our afternoon in El Triunfo, we decided to visit the Santuario de Los Cactus just down the road in El Rosario. Camping is allowed in the parking lot of this preserve. What I didn’t know was that despite being just “down the road” that road was long, bumpy, and unpaved. When we arrived it was late afternoon. Our host Lupe was quite a character. He spoke perfect English after living in the US for many years and hated “Spanglish.” He showed us how he climbs trees and the furniture he made out of dead cactus. We spent the night in the parking lot, walked to the town the next morning for a lovely breakfast, and then strolled along the walking paths of the sanctuary on our return. Besides the desert plants, we saw a lizard and quite a few birds including a California Gnatcatcher, an Oranged-crowned Warbler, a Scott’s Oriole, a Grey Flycatcher, a Robin, a Gila Woodpecker, a Ladder-backed Woodpecker, and the absolute prize of the day, an endemic species that is only found in southern Baja, a Xantus’s Hummingbird.

Center. Port screwed into cactus to feed in fluids. Some sick cacti have been healed this way.

Picnic furniture made from dead cactus wood. Lupe told us that the cactus wood is harder and more solid if it dies on a full moon. The termites are less likely to eat into the wood then.

I wanted to do something different. I started looking at camping sites on iOverlander and spotted a review of a site north of the town of Adolfo López Mateos on the western coast. It wasn’t positive. The reviewer was disappointed that there wasn’t a view of the ocean, just mangroves. “I don’t really know why anyone would want to camp here unless you really like mangroves…” the reviewer complained. I love mangroves! Especially if you can kayak through them. There were no directions to this location – just GPS coordinates in the middle of a maze of dirt roads. I used the satellite mode on Google Maps to plot out a path. We drove down a nice paved road from highway 1 toward Adolfo López Mateos then shortly before town turned off onto an unpaved road that took us to where I thought we should turn to reach our destination. Watching the map, which luckily matched the actual terrain pretty accurately, I navigated directly to our new camping spot. Situated on a hill there were several places to launch the kayak onto a mangrove trail. And we had the place all to ourselves.

We blew up our kayak, Pirogue Bleue, that afternoon and put her in the next morning at low tide. We didn’t see lots of birds on our paddle but I did get a good shot of a California Scrub-Jay – a new one for us!

Sunset beyond the mangroves over the Pacific Ocean.

Looking at channel through the mangroves.

We had previously visited Bahía Concepción 4 years ago on our first trip to Baja. We stayed in one of the popular pay campgrounds along the water. But this time I wanted to check out one of the free camping areas along the southern part of the bay and kayak. Since we weren’t far away in Loreto we decided to blow Pirogue Bleue up the night before we left, and stuffed her in the van that next morning so we could launch her right away. With the kayak filling up the entirety of the interior of the Ballena Blanca we had an awkward stop at a military checkpoint when one of the military personnel wanted to inspect the inside of the van. Luckily he just peeked over Pirogue Bleue and didn’t ask me to unload her.

Getting to our camping spot was a little dicey. The entrance from the highway to the dirt road leading to the spot I had picked out was steep and rutted. I straddled the ruts in the van going downhill. Fortunately, it flattened and leveled out quickly. When the road started looking dicey again we decided to stop before we made it to the site I’d picked out. No problem, we found the perfect spot anyways. The water was like glass and we launched Pirogue Bleue right away. The distant mountains reflected on the surface of the water which was so clear we could see the bottom of the bay.

After two nights of not seeing another soul, we finally left, driving north the length of the bay. Looking out my window as we wound up into the hills I could see all those paid campsites we decided to skip. Every single one of them was packed.

In the morning the bay was as smooth as glass.

Kayaking over a kelp bed in the bay.

Booby flies over the bay, which starts getting choppy in the late morning.

On our second day at the bay the water was pretty choppy so we walked the beach instead of kayaking. The Magnificent Frigatebirds came swooping over just above our heads as we strolled along.

This was a Greg pick. We had briefly visited here 4 years ago. Greg wanted to return to explore here again. Since our campsite was not far off the highway, we had no problem navigating the dirt road to get to it. But the stretch of highway before our camping spot was a very long drive of nothing – no houses, gas stations, stores, or cell service. We filled our tank up at the last station going north and enjoyed the miles and miles of stunning desert.

Tall cactus on the right is a Giant Mexican Cactus. The tall one on the left is a Cirio.

The Cirios can curl into strange shapes.

Gila Woodpecker on a Cirio.

Sunset in the valley.

At the very top of the sea of Cortez is a Biosphere Reserve. I’ve often looked at the map and have wondered how to experience this wild place. The answer is Campo La Salina. Down another dirt road off Highway 3 in Sonora, Mexico is a little camp with rooms for rent and space to park your rig. Down the road from the camp is the most amazing beach where you can camp if you have a rig that can drive through sand. The host of the camp was super extra nice. He spoke to me in slow Spanish and I understood most of what he said. The entry fee was 150 pesos ($7.50) and we stayed two nights.

The camp is adjacent to Tohono O’odham land. This Native American Tribe straddles the border of the US and Mexico. I learned a little about this when I was writing my blog about the border wall last year. The tribe has a gate on the border that they use to travel freely back and forth across their lands in each country. The salt field that we camped next to was a sacred Tohono O’odham site. A sign let us know not to walk across it.

We used El Burro to drive closer to the beach. We parked next to a salt mine and walked the rest of the way. I had read that this beach was great for birding. We weren’t disappointed. The birds, beach, sand dunes, the water – it was all stunningly beautiful.

I’m sure this spot can get busy and the rooms can get booked up but for the two nights we were there we were the only ones around besides our hosts.

Oasis in the flats. These pop up wherever fresh water is close to the surface.

Salt being mined for cattle. The inches-thick salt is pushed up by bulldozer and loaded onto trucks.

Dunes near the beach.

Small trickle draining into the Sea of Cortez. The whole low elevation area on the north end of the Sea of Cortez was a delta of the mighty Colorado River. When you drive through the many flat, sandy, salty miles it’s easy to see how big the Colorado once was. So much water is siphoned off it now we drove over the Colorado ditch without even noticing.

Surprise! A barn owl, way out of range, tries to nap in a sandy cliffside.

Sandy cliff along the beach.

It is quite possible that I will be sharing this post on Wild Bird Wednesday. Check out this blog hop to see what birds people have seen recently all over the world.

16 thoughts on “Off The Beaten Track”