Posted by Duwan Posted on January 15, 2012 3 Comments on Jan 14
Posted in Boat Projects, Life on the Water

Today was a big day. We rose before the crack of dawn and drove down to Fort Lauderdale.

We had to accomplish three big things:

1. Pick up our new life lines and install them on the boat (Had a few problems, but eventually resolved them – accomplished)
2. Spend a whole lot of money at West Marine (this was way too easy – accomplished!)
3. Load the boat with everything we need for our trip from Fort Lauderdale to Port Salerno on Monday (accomplished!)

And a few minor things:

1. Exchange the sandals Greg’s parents bought for me for Christmas from Dick’s for a smaller size (So far we have visited every Dick’s between Stuart and Fort Lauderdale. They either don’t have a color I like or my size. This task remains unfortunately unaccomplished)
2. Find a Whole Foods and stock up on Badger Sunblock (accomplished)
3. Check out the anchorage in Fort Lauderdale (ran out of time – unaccomplished)

After dropping off the supplies we brought from Stuart at the boat we headed to the West Marine Super Store. This store is huge! Luckily we came prepared with a list of the items we wanted including model numbers. We found a West Marine associate, read from our list and followed him around while we loaded up two carts. We picked out a brand new outboard engine for our dingy, picked up our new life lines and dropped three grand. 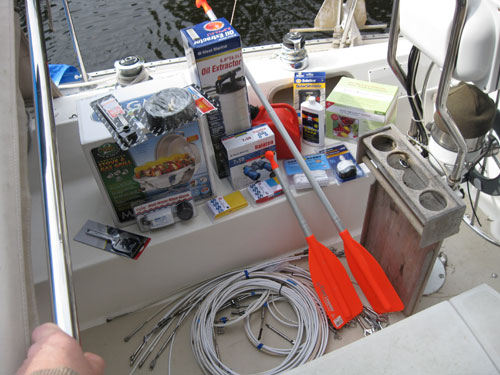 Back at the boat we started to install our new lifelines. There was a problem. The forward life lines were fine, they looked all wonderful, shiny, new, and gleaming white. Installing them was easy. But the aft and gate lines were wrong. At first we thought this was our fault, then we thought it was West Marine’s, it ended up being a combination of both.

We were told by several people to simply remove our old lines and take them to West Marine so they could use them as a guide to make the new ones. This seemed simple enough (except, of course, for the removing our old lines part – Duwan’s bruise is slowly fading) and it was, except we did not realize our lifelines were configured in a nontypical way. The fixtures on them were unusual. Our rigging guy was confused, but because he had no more information than what the lines themselves provided he went about recreating them with standard parts that seemed to match what we had brought him. 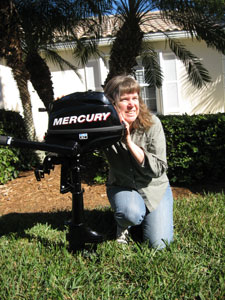 We returned the faulty lines and had a little back and forth with the rigging specialist before we all understood what the problem was and how to fix it. Our guy at West Marine really ended up coming through for us. He cancelled an appointment he was about to go to and made the corrections in short order. He also gave us a big price break (after he learned that the markup on them was 100%) on the new connections the lifelines should have been created with in the first place.

Lesson learned: If you have an old boat don’t assume that anything can be replaced with standard parts. Next time we will take pictures, make drawings and measure with a micrometer.