Our trip south to Ft. Lauderdale using public transportation went as planned. There were a few snags in the trip to bring the boat north, though.

First, the boat was grounded at the slip when we arrived. I had printed some tide tables, but nothing that showed the tides four miles up New River. We watched flotsam in the water to see whether the tide was coming or going. We managed to work the boat out of the slip about 2pm. We were off and motoring out unmarked New River!

The river is lined with hotel sized boats. I didn’t realize that most of these are pulled in and out by tugboats because they are simply too big to maneuver in the river. As we passed a shallow unmarked manatee park on our right a couple of tugs rounded the bend. They were pulling one of those hotel sized boats straight toward us. 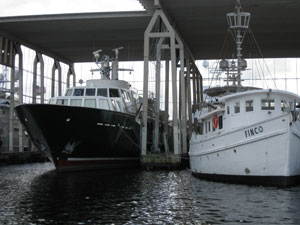 Our depth finder had been showing good depths. I veered slightly to the right to make room. Suddenly our six foot keel was dragging bottom. I hit reverse hard and spun around as the hotel bore down on us. I headed back the way we came but shortly ran hard aground in the manatee park. The tugs waved as they passed by.

I’ve decided that there is nothing more entertaining than a sailboat that’s grounded. Go right now and cancel your cable, sell your flat screen, buy a john boat, and cruise a river looking for grounded sailboats. 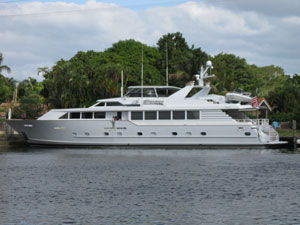 The parade of advice givers ebbs and flows down the river. First come the professionals. We met a few tug operators. They were lean clean-cut guys with Crocodile Dundee hats. They were all nice. They all lamented that fact that we had bought the low-level BoatUS membership that just gave us $50 off on a $750 tow. But they did offer good advice.

Next come the fishermen. They are also nice and offer advice and free help. But I have been fishing before, and I’m pretty sure they are all inebriated. They do genuinely want to help you out of the river though, as all that gunning of the engine, banging around and loud swearing is probably scaring off their fish.

When your sailboat is aground you can wait for high tide. But our tide was going out. You can also kedge off. Kedging is basically simple. You hop in the dinghy with an anchor, set the anchor out away from the boat, row back, tie up the dinghy, wrap the anchor rope (rode) around a winch, and crank away to try and move the boat. It helps if there are some waves. Making waves is fun for the passing fishermen.

Our attempts at kedging off were especially entertaining. The handiest anchor was a huge 35 pound plow with at least 60 feet of heavy chain on it. After it was set I would crank on the winch while Duwan gunned the engine. Since there was so much chain we had to keep disconnecting the rode and reconnecting it closer to the anchor. (You can winch rode but not chain.) We kedged a few times, but were getting nowhere fast.

With the receding tide and impending dusk we decided to accept help from some fishers who had offered a few times. I kedged, Duwan gunned, and they pulled on a line we had tossed them. We broke free! I hauled on the anchor, Duwan steered, and the guys tossed the line into the water where it immediately wrapped around our prop and shut down the engine.

The guys put a line on the bow and towed us to a nearby private dock. We tied up, hoping no one would run us off. We thanked the guys profusely and I dove down to get the line unwrapped from the prop. After it was off the engine ran fine.

(Oh, we learned during the day that local traffic on the New River monitors VHF channel 9 instead of the standard channel 16. Channel 9 is used for bascule bridges in Florida. There was nothing on the charts about using it for river traffic.)