Posted by Greg Posted on January 13, 2012 2 Comments on Jan 13
Posted in Boat Projects, Life on the Water

Our engine ran fine when the former owner started it during the survey, but I have been unable to crank it since. After checking everything I know about, I called for help. The guys from KC Marine came out and did some more testing before noticing that the glow plug wasn’t hot. After we gave the plug enough time to heat, she started right up. Then, after a quick break to trim my nails, we pumped up the dinghy. No leaks! 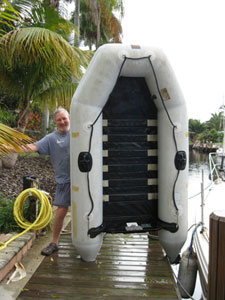 Tomorrow we head to Ft Lauderdale again to buy boat supplies and load the boat. This is a long trek to make every day, so we have decided to bring to boat up here. We found a place to haul out in Port Salerno. It is a few miles from the house and it is close to an anchorage and Finz, a restaurant with a dinghy dock out by their tiki bar. We hope to bring the boat up early next week.

It’s not easy to get around in South Florida without a car. Here is the route Duwan figured out. We will drive a few miles to a park-and-ride off I-95 and leave the car there. We ride an express bus to the train station in West Palm Beach. The commuter train will take us to Ft. Lauderdale, where we will be two short bus rides from where the boat is docked.

We plan to take our time sailing back up here. We will motor down the river waiting for all the drawbridges to open, then anchor overnight closer to the ocean. Then we plan to sail out into the Atlantic and up to Palm Beach for another night on the hook. From there we will come up the Intercoastal Waterway to Port Salerno. I think we will learn a lot in the next week. I will pass along anything interesting — even if it’s embarrassing.