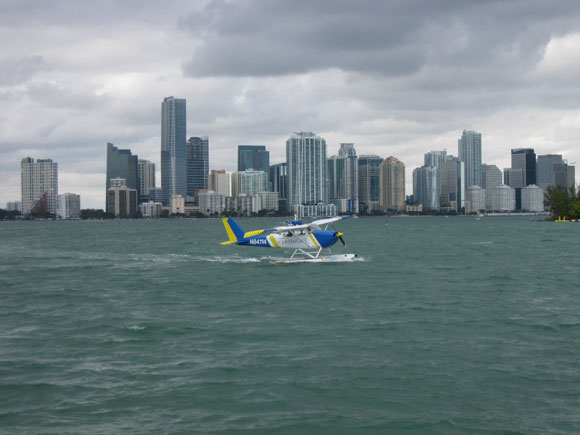 At our anchorage last night we had gusts of wind up to 20 knots. Blue Wing rocked and swung and the lazy jacks clattered against the mast making a horrible racket throughout the night. I worried we would slip anchor, but our anchor is a good one and held fast.

The whole anchor thing amazes me. It seems so tenuous, this giant hook that holds us in place by chain and rode as the wind and current push us around in the water. It seems like a great metaphor for something, but don’t worry, I am not going to get all philosophical, this is just the stuff I think about at night when the wind is high I can hear the sound of it and the boat is rocking like a tortured rubber ducky.

The anchorage that we are currently staying at here in Miami is called Marine Stadium – most probably because there is a marine stadium here.

Now, I have never seen a marine stadium before. It looks just like a regular stadium with tiered seats, except that the bottom rows come out right over the water. I have no idea what kind of competitions they view here, but when we arrived on Wednesday there were several crew teams rowing around the perimeter of the anchorage.

This little cove is an interesting spot. There is a boat launch here and a large open-air boat storage site with boats stacked up like cars are in parking lots in New York. A big forklift pulls boats out and sets them down in the water. The boaters then speed away towards the bay creating a wake that sends us boats hanging on the hook a-rockin’. We have seen dolphins swimming near the boat and a wonderful double rainbow after a day out the inlet when were busily dropping the anchor in the rain. But I think Greg’s favorite sight has been the seaplanes that take off and land 20 or 30 yards from the boat. There are also about 25 or 30 other boats anchored here. We haven’t seen many of our neighbors, though, perhaps because of the rain.

Since we have been here we have finally raised the sails on Blue Wing and sailed her in the bay. It went swimmingly except for the persistent looming rain. We have also learned a new thing or two about her. Since we had Blue Wing back in the water we have noticed an amazingly awful smell after one of us used the head. You couldn’t smell it while in the head, but if you were the person outside of the head in the cabin it was pretty bad and even worse if you were sitting on deck. Greg scoured the head manual trying to figure out the problem – did we have a trough hull open we shouldn’t? Was something not adjusted correctly? Did the head just need more deodorant? Eventually, Greg noticed that when the head was pumped it was spewing overflow through a hole on the deck.

We had learned previously that when filling the fuel and the water tanks that the overflow comes out a hole at the stern. Apparently, the waste tank has an overflow hole also. It was time to go out the inlet and macerate – grind up the waste and discharge it from the boat.

On Friday we made our trip to the Atlantic so Blue Wing could relieve herself. Macerating is a nasty business and rules require that you be at least 3 miles from the mainland before you discharge. It was a long strenuous bumpy ride. We macerated, I threw up and Greg took us back to the anchorage in the rain. Next time I will wear my pressure point bands and chew some ginger.

Friday’s adventure took a lot out of me, so Saturday became a day of rest. We did small repairs on the boat and some organization. We listen to iTunes all day and didn’t go anywhere. It was kind of nice.