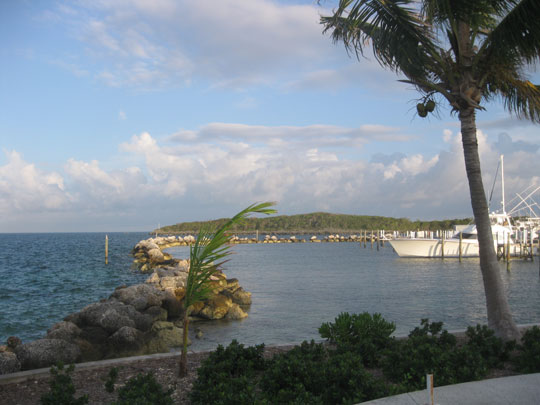 The sea wall at Orchid Bay Marina. Most of the rough water was outside, but a little made its way past the big rocks.

After little sleep Saturday night we woke up to a rolly marina on Sunday morning. Orchid Bay Marina is open to the sea of Abaco on the south side. A wall of large rocks helps to keep the waves from rocking the marina, but an unpleasant surge still manages to get in.

We assessed the damage from the night before while Debbie and Karen wandered around the island finding coffee and breakfast at Pirateâ€™s Cove. 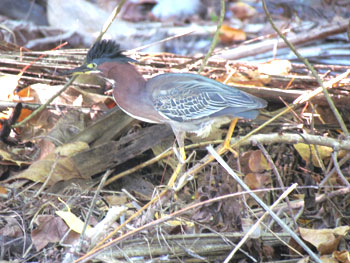 We set off to Marsh Harbour with enough time to get to the Marsh Harbour Marina just before high tide. It was a fine day for sailing until we ran into one of those Bahamian summer showers. The skies darkened and rain started to fall. Debbie and Karen moved under the dodger. Greg got our rain gear. I could see Marsh Harbour just ahead. It started to rain harder and Marsh Harbour disappeared. We dropped the sails and cranked the engine. I motored slowly using the compass as my guide through the cold biting rain. Luckily it was only a summer shower and not the start of an all day downpour we saw so much of the weeks before and days after Debbie and Karenâ€™s visit. The skies cleared and we motored into the harbor with no problems.

At the marina we found the docking situation notably different than our experience at Orchid Bay. The owner of the marina met us at the dock and tied us up with so many lines we had to go hunt more. Blue Wing would be safe and secure this night.

It was lunchtime, so we made a spread of salads and leftovers and everyone ate before heading their separate ways for a while. Debbie went straight for the water at Mermaid Reef, Karen took a nap, Greg dealt with the bow roller situation, and I made sure we were still connected to the outside world through the wonders of the Internet. 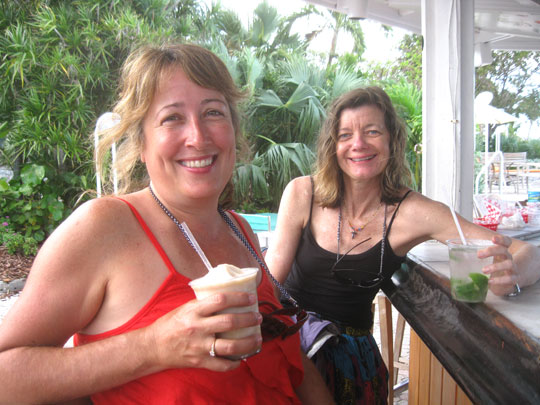 Early evening we set out to explore the nightlife on the other side of the harbor. Our first stop was the tiki bar at the Abaco Beach Resort and Boat Harbour Marina. This is the kind of place that makes you feel like you are on vacation â€“ frozen drinks and cold beer at an upscale outdoor bar next to a marina with small floating mansions tied up to its docks. I felt relaxed here, no boat problems, food to prepare, or anywhere we had to get to before high tide â€“ just an evening of food, drinks, and friends ahead.

From the resort we headed to Curly Tails, our dining destination. The restaurant wasnâ€™t open for dinner yet, so we walked on down to Snappas. 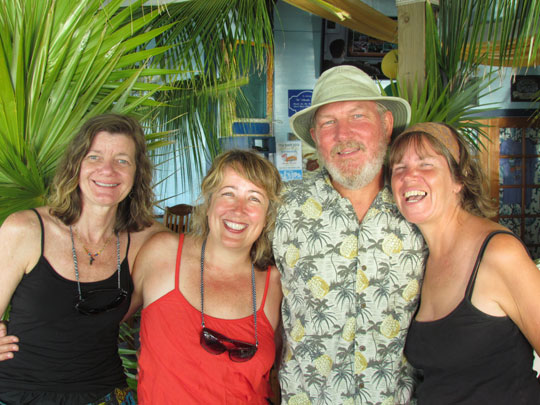 Snappas still had decoration up from their toga party the night before. We were glad the party was the last night and settled into the bar for a relaxing cocktail. At Snappas we met an American couple who live on their boat at Marsh Harbour Marina year round. They work in the Bahamas and found it cheaper and more convenient to live on a boat (although they never sailed it) than to buy a house. 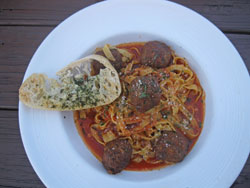 The pasta with eggplant meatballs was so good!

Back to Curly Tails we grabbed a table outside overlooking the harbor. Curly Tails came highly recommended by one of Karenâ€™s Bahamas tour books. The recommendation seemed well earned. The food was wonderful. They even had something for veggies like me, a pasta dish with eggplant meatballs. So good.

As I may have mentioned before in this blog, most things, especially food tend to be a little expensive in the Bahamas. Our deal with Debbie and Karen was that we treat them aboard the boat and they treat us off. I think they underestimated the cost of this nightâ€™s outing, when the bill came, they were short.

This meant a trip back to Blue Wing for more cash, leaving Debbie and I as insurance. Marsh Harbour Marina is a great marina in most everyway, except that it is a couple of miles on the other side of the harbor away from everything else. The trek back took a good bit, but Greg and Karen finally returned and ransomed Debbie and me. 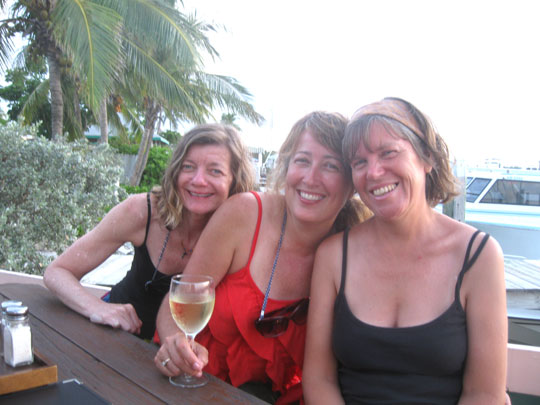 With good friends at Curly Tails.

That night, completely sated, with our good friends aboard, we slept well. No inspirational songs or perilous situations, just sound, sound sleep.