Posted by Greg Posted on June 20, 2012 5 Comments on Shake It, Baby
Posted in Life on the Water

Deciding to come back to the U.S. took no time at all. Putting together a “loose plan” for our return took a few hours. Actually getting back took many days.

First, as you know, we had a period of rest, blogging, and planning. Then we went to Marsh Harbor for provisions. After that we traveled to the furthest known source of reliable weather information, Green Turtle Cay. Here we mapped out our next steps, did some exploring, and waited on a weather window.

At last, on Saturday June 16th, we sailed 30 miles north under a brisk breeze to Foxtown. We had hoped for a good internet connection there to verify the long range wind forecast, but settled on a beautiful, quiet place to cook and swim.

Remote, unpopulated Mangrove Cay was to be our gateway back to the States. This is a small isle north of Grand Bahama Island. It’s just 40 miles west of Foxtown, but it took us most of the day Sunday to sail around obstacles like Veteran Rocks, West End rocks, and Great Sale Cay to get there.

We could have made it faster but a large pod of dolphins overtook us when it was time turn back on course past Great Sale Cay. They teased Duwan by cavorting around the boat, making cute acrobatic moves just a split-second faster than it takes to press a camera button. (Duwan would like another pet. I’ve told her she can have all the dolphins she wants.) 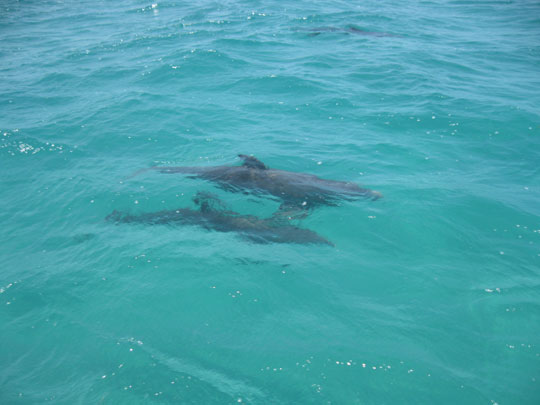 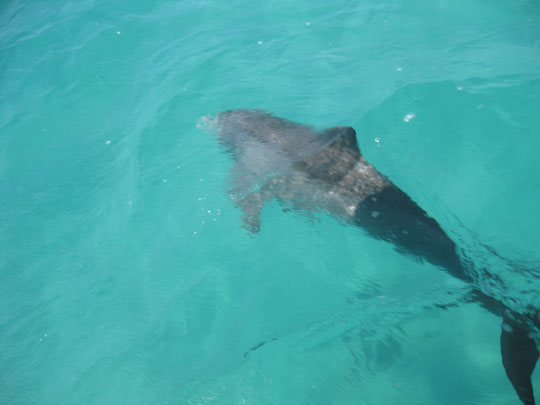 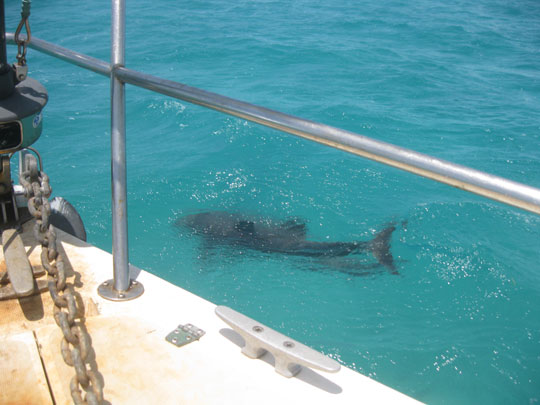 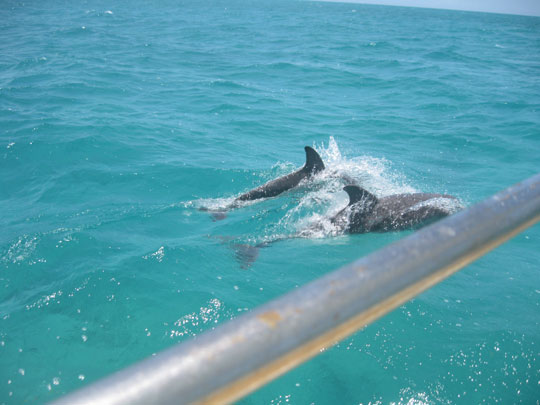 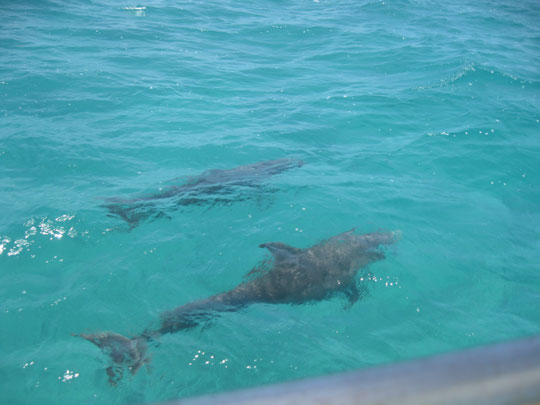 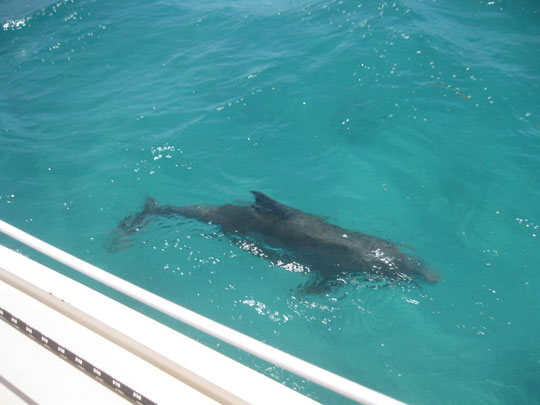 Mangrove Cay is very small and strong currents course around it. There was barely enough isle to protect us from the wind, but the anchorage was surprisingly calm and pleasant.

We left Mangrove at 3pm the next day. Our plan was to cross the remaining 23 miles of the Little Bahama Bank before dark, then make our passage to the U.S. overnight, arriving in daylight hours.

My parents have a house in Stuart, FL. If we store the boat near there we will have a place to stay while working on her during the off-season. The closest inlet to Stuart is St. Lucie. This inlet has a reputation of being unreliable for cruisers. It has to be dredged often. But we confirmed that it had just been dredged. Charts also change frequently for St. Lucie, but I looked at the latest charts online and made notes about the recent differences. So our primary destination was St. Lucie Inlet, with Ft. Pierce as a backup.

Duwan steered us from Mangrove Cay across the bank. We made it across in time to see the sun sink into the west. I took the helm for the next four-hour shift. Each time we’ve crossed a stretch of the Atlantic, Duwan has gotten seasick. This time she had taken some highly recommended Sturgeon 15, which is not available in the U.S. I was hopeful that it would help, but privately I expected to be at the helm until we reached Florida.

Our goal was ENE of us, but I pointed the bow southwest. We were crossing the Gulf Stream, and that momma wants to go northward. She will drag your butt up to Maine if you aren’t careful.

Now when you’re approaching some small island at night you strain your eyes for the first phantom glimpse of a single flashing red light. Not so when you are headed back toward Florida. Shortly after you leave the Bahamas a long glowing hazy strip of light appears below the clouds. It soon spreads across a large portion of the horizon. As one noted Bahamian says, you call easily tell you are going back to that big “shopping mall across the water”. We do appreciate you folks leaving the lights on for us.

We actually made SW progress for a while, doing about six knots. But by the time Duwan took the helm again the Gulf Stream was changing our SW heading into a path leading almost directly west. Conditions were a little more intense for her this shift. It was dark, mostly cloudy, with 15 knots of wind and a steady four foot roll. As she sailed we discussed when it would be time to change to a northwest tack. We were both very pleased that she could take a shift in these conditions instead of being miserable with motion sickness.

We decided to change course with the end of her shift. Normally doing a jibe to change directions is not very exciting. I winch in the mainsheet to center the mainsail. This insures it won’t get whipped around violently when we turn away from the wind. Then after we turn, I adjust both sails. As you know, our mainsheet winch is broken now. I have been pulling in the mainsheet by hand. It wasn’t a problem until now. With a cockpit too wet to secure a good foothold, and with high wind and waves, I couldn’t get the mainsail very close to center. When I did have the sail halfway in, Duwan had to struggle at the wheel to hold the boat on course. After a bit of yelling back and forth we just went for it. The turn went fine and I was able to snug up the main as it passed from right to left and let it back out gently.

Then it was my turn at the helm. We flew. The Gulf Stream and wind propelled us NNW at a rate of 10.7 knots the first hour. In the second hour, even as we eased out of the stream, we made 8.3 knots. We were going too fast toward the coast in this darkness. At 5am we furled the headsail proceeded at a more relaxed pace. By 8:30am we were at the inlet. The straight-line trip is 83 miles. We had managed to stretch this into a 102 mile trek, but we know how to make it shorter next time.

St. Lucie Inlet only got shallow on one spot. We piloted through the confusing intersection between the river and the IntraCoastal Waterway and into the freshly dredged Manatee Pocket tributary.

The Manatee Pocket channel had been dredged, but the anchorages were still shallow. We made a couple of attempts to anchor in the primordial ooze here. We dropped our trusty plow anchor and called customs to report in. They said we needed to visit Ft. Pierce in person within 24 hours. As we considered that, we saw that our “plow” had not anchored us at all. We were dragging. Next we tried using the bruce anchor. It may have held better, but now our keel was almost resting on the bottom.

While I washed the black ooze off, Duwan started calling nearby marinas. We docked at nearby Mariner’s Cay, caught a cab to my parents’ house, and drove our car to Ft. Pierce. Here a Homeland Security officer took a glance at our passports and told us we were good to go.

Today we motored in the rain to catch a mooring ball at Sunset Bay in the St. Lucie river. We plan to store Blue Wing at a boatyard inland at Indiantown. But there is a lock between here and the boatyard, and the Army Corps of Engineers has the lock closed for maintenance. We will probably stay here on our mooring ball and start refitting the boat until the lock opens.

Our shake-down cruise of four months has come to a close. We have a good idea what needs to be addressed before team Blue Wing/Duwan/Greg sets sail again. For now this is Greg, from Blue Wing (the Whole Lotta Love boat) signing off.

5 thoughts on “Shake It, Baby”