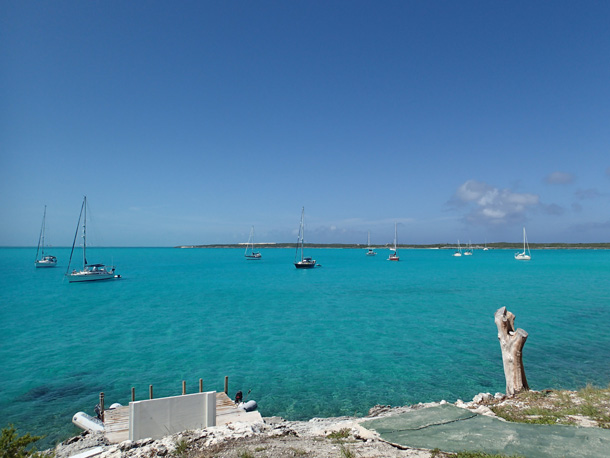 We awoke to a significant side to side roll with a strong current. Greg got the wind forecast, which was ominous indeed. Winds were forecast to be out of the South at 20 knots +, fading to 15 knots in the afternoon and swinging to the Southwest overnight. ‘Duck for cover’ was the recommendation. Our plan was to sail down to Black Point to replenish our supply of coconut bread (which is absolutely incredible, by the way), then sail back up to anchor between the majors to ride out the impending wind shift. But not before cooking pancakes with chocolate syrup and dark chocolate covered berries on top.

As soon as we got underway, the wind dropped significantly. We were not making much progress, so Greg adjusted the rigging, and we picked up speed to 6+ knots. I was able to stay on track so that one tack was enough to get us there. When we came about for our final approach to Black Point, everything smoothed out and we were making 6.5-7 knots for the whole starboard tack into the anchorage. I held the boat steady at 120 degrees, and had good way points on land to keep me on track. It was the best sailing of the entire trip, however brief. I felt completely connected to the boat, the wind, and the water in a way that I had not felt previously. Everything was in harmony and I was completely at peace.

As we got close in, Duwan commented that Greg never lets her sail into an anchorage because he gets nervous about having too little control in close quarters. Today, everything felt right, and he made an exception. We were perfectly on course for the waypoint and had an excellent approach to our anchor spot. We dropped the sails, and about that time I noticed a pair of dolphins swimming off our starboard side. Duwan took the wheel while I got my camera out to capture the moment. I hoped they would stay close so I could go out and swim with them, but they headed out to the bank as we were anchoring.

Greg and Duwan noticed that Moonshine was anchored just behind us, and its captain, Bill was a friend of theirs. We dinked ashore to get our coconut bread and my first real shower in 6 days. This was the first time since arriving in Staniel that I was onshore of an island that had people living on it and businesses that were in operation. Relatively speaking, it was like returning to civilization after being away for nearly a week. The bread was priority number one, so we headed straight there where we met Lorraine and her Mom (the bread lady). Her mom was awesome and I got a photo with her behind the bread spread.

After getting the prized loaf, we headed next door to Lorraine’s cafe for a couple of cold beers while we discussed our plans for the evening. Our intention had been to sail back to Staniel, but Bill suggested we stay until morning because the winds should not be an issue overnight. We all agreed that it was worth the risk, and we decided to stay. The bonus was that Happier Hour was approaching at Scorpio’s, so the decision became pretty easy for us. This was our first time having dinner ashore at a restaurant, and I was delighted to treat. We had a nice time chatting it up with Bill, and stayed until about 30 minutes prior to sunset. The night was mostly uneventful, but early the next morning, the dreaded southwest wind made its presence known.

The next morning, Blue Wing rolled back and forth, making for a less than pleasant experience, to put it mildly. Duwan was more than ready to get out of there, so we pulled up anchor and headed out on the bank to find calmer waters between the Majors. We had a nice sail, making 6 knots until the turn past Harvey Point. Duwan helped guide me through the tricky course alongside the Staniel Cay marina and past the Crown of Thorns on the way up to anchor between the Majors. The current is really strong in the channel and there is very little room for error when coming through.

We made it safely to our anchor spot on the South end of the anchorage and dropped the hook to settle in. Greg made our breakfast of grilled coconut bread that we had worked so hard to get, and we all breathed a little easier that the waters were much calmer in our present spot. I had developed some minor sunburn from our escapades over the past few days, and I felt it was in my best interest to spend some time below deck as the heat of the day approached.

Not long after I went down below to do some reading, Duwan yelled down that she thought a powerboat had run aground. I hopped up quickly to have a look and was sad to see that indeed a 65 foot motor yacht, Chocolate, was hard around on the Crown of Thorns. The current there is extremely strong, and she went aground near high tide where she was being pressed against the rock with little chance of escape. The captain called for a mayday, even though the situation did not appear to be that severe. Based on the radio transmissions, it became clear that the captain was in way over his head.

We watched as the situation unfolded, and several dinghies went over to get a sense of the what could be done to assist. This is a very active channel and the rock is directly in the cut. Very unfortunate for all involved. A larger yacht arrived on the scene and attempted to pull the imperiled vessel off the rock with an anchor line tied from the bow of the rescue vessel to the port stern cleat of Chocolate. After a couple of attempts, the line broke and nearly flew into the area where dinghies were watching the action.

Shortly afterward, a commercial salvage vessel radioed in and offered assistance. Evidently sensing the futility of having another private vessel attempt to pull him from the rock, the captain accepted assistance and the long operation of removing the stricken motor yacht began. It was unclear based on radio transmissions exactly what was agreed to, but the captain of the rescue vessel continually referenced the ‘salvage operation’ in progress as other boats neared the area. They had a long heavy tow rope attached and made several tries at freeing the yacht from the rock. A couple of times, they were pulling straight toward where we were anchored and we wondered if we would have to move.

After a few hours, they had the boat pulled free of the aptly named Crown of Thorns. The rescue vessel kept the stricken vessel in tow while a diver surveyed the damage below the water line. At one point, the yacht was swinging very close to our stern, and I was able to ask the captain how bad the damage was. He indicated that both propellers were damaged and the puncture in the side was causing them to take on water. Presumably, the pumps were keeping up with the incoming water, because she stayed afloat through the entire affair. Eventually, the salvage vessel towed her back toward the marina and out of sight. The adventure was over, for us.

We relaxed for a bit onboard Blue Wing. I was still a little hesitant to go out in the early afternoon sun. I read some of my sailing book and waited for a good time to head over to the shore to do some diving. Greg and I went over and snorkeled over the coral just offshore and saw some beautiful fish in the shallow formations. Soon after I got in the water, I got some footage and photos of a small ray swimming along the bottom. 30 minutes or so later, we went back to the shore to have a look at the wreckage of an old boat that ran aground. I was getting in position to get a photo of the inside of the hull when my camera battery died. Alas, no photo of the wreck.

We headed back over to the boat to move up a little further north in the anchorage and after getting into position, we had the return of pizza night in the cockpit. The pizza was just as good if not better than the first night! Pizza and beer rounded out the evening, and we got to bed at a reasonable hour. Not long after turning in, a rain shower came overhead and cooled us off a bit. The wind had completely died by the time we went to bed, so the cool breeze was a welcome goodnight present. ‘Reality Eve’ had drawn to a close.

The final day of my adventure started with us eating the rest of the prized coconut bread for breakfast before we pulled up anchor to head over to Big Majors Spot to feed the pigs. Duwan motored us over while I got a chance to have some time away from the helm. I was happy to relax for a bit and get to see the dreaded Crown of Thorns while someone else was at the helm.

The pigs were evidently satiated from prior feedings, but one pig swam out to greet us and accept our offering of bread. Duwan did the feeding while I took pictures. I got some good shots of bread in midair, as Duwan’s hand got closer and closer to the pig’s mouth. Eventually, we ran out of bread and returned to anchor over near the marina. A few hours later, it would be time to go ashore and fly home. It was the end of this particular adventure, but the beginning of me answering a calling to the sea. There can be no doubt – this will be a way of life for me in the future. Thankfully, I have good friends like Greg and Duwan to help show me the way. 🙂 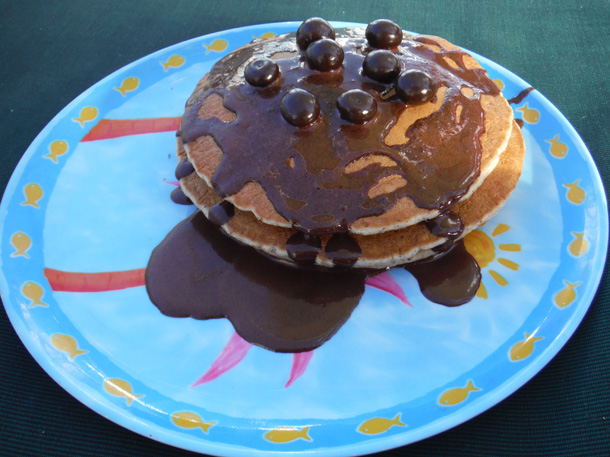 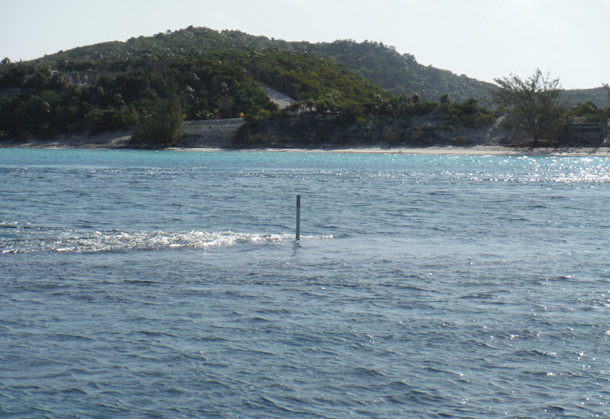 The Crown of Thorns lies just below the surface, marked by this PVC pipe at high tide 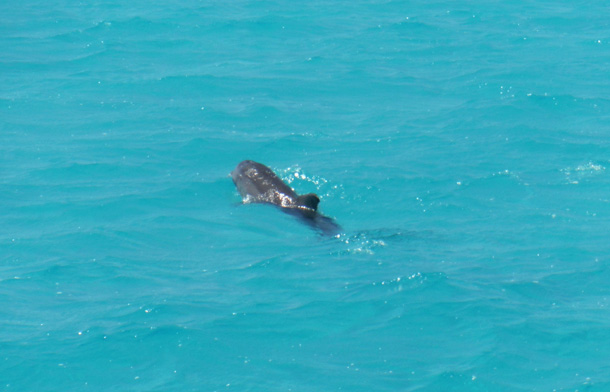 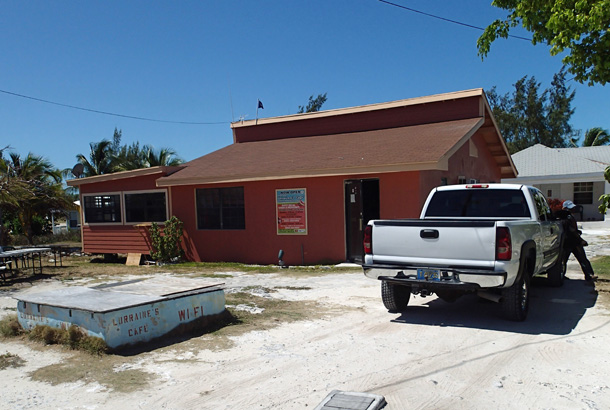 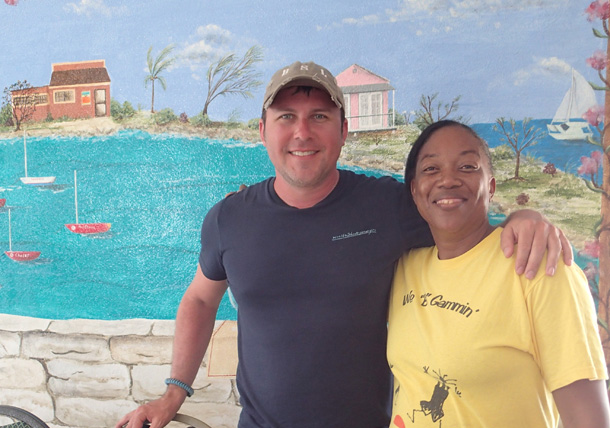 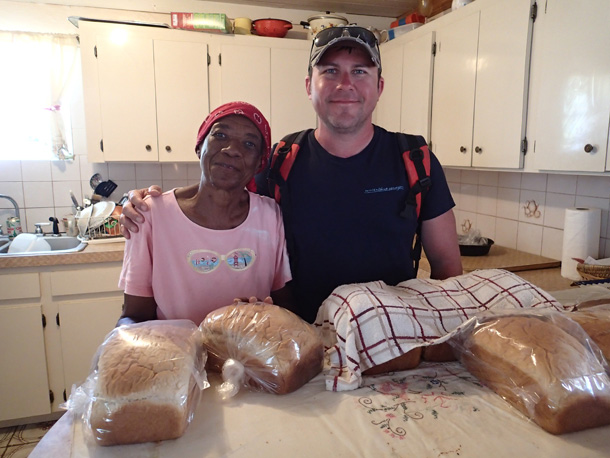 Lorraine’s mom, the bread lady. We were in her kitchen in this photo. 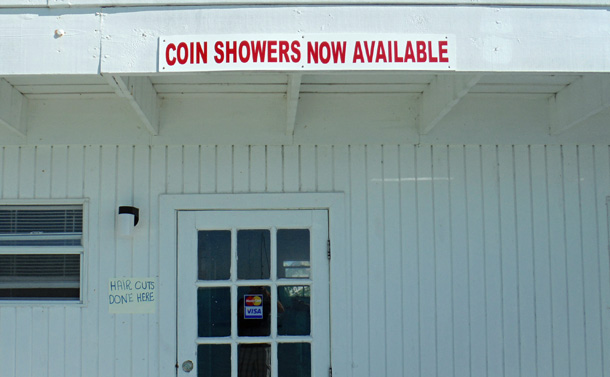 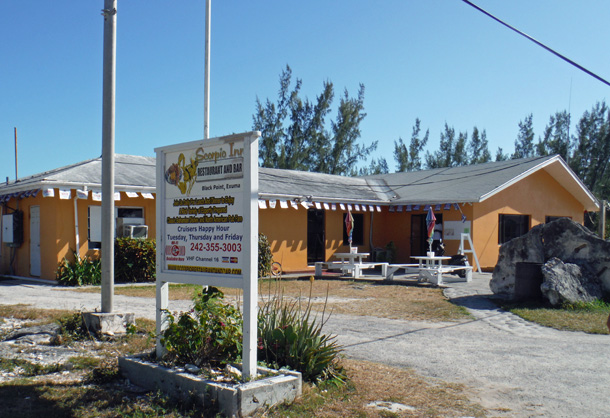 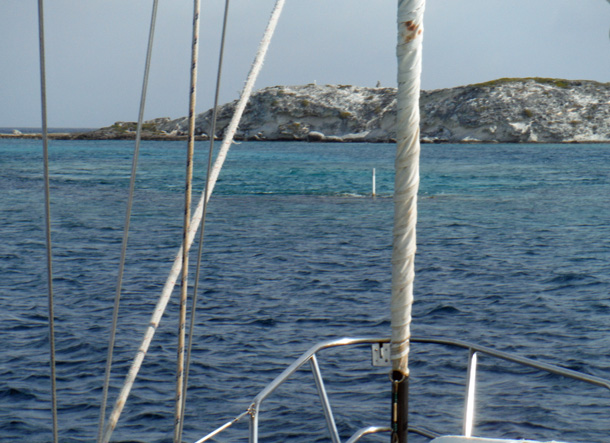 A ‘thorny’ approach in the cut. The Crown of Thorns lurks just beneath the surface. 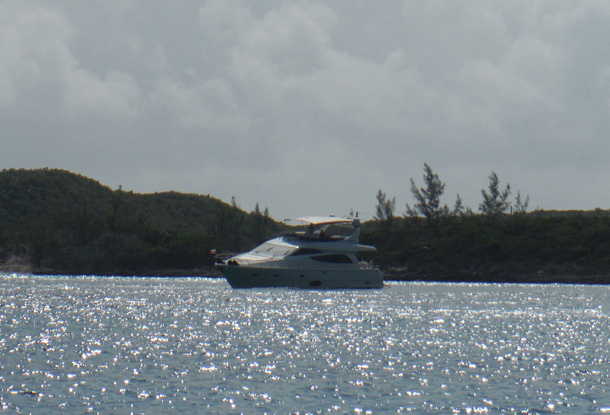 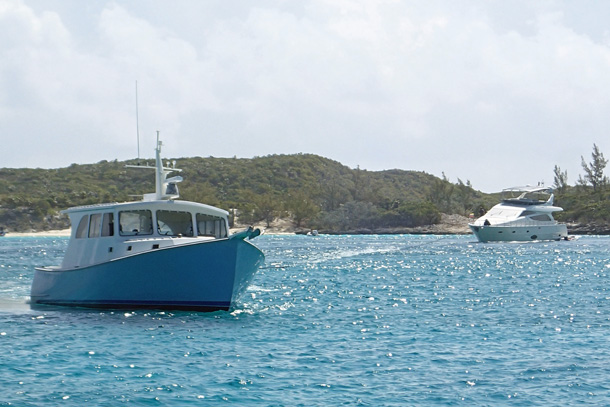 The motor yacht gets a little help from a little blue tug. 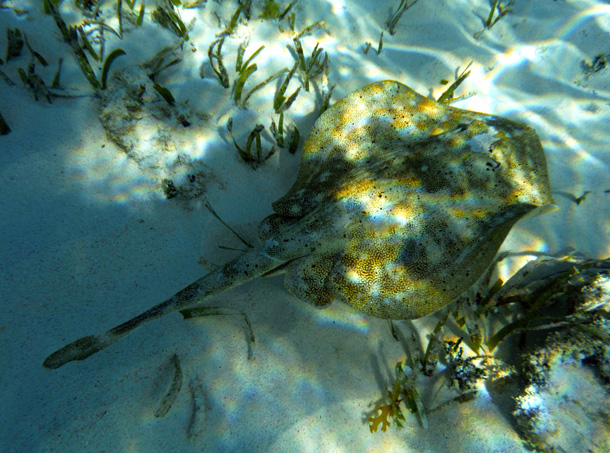 A ray between the Majors 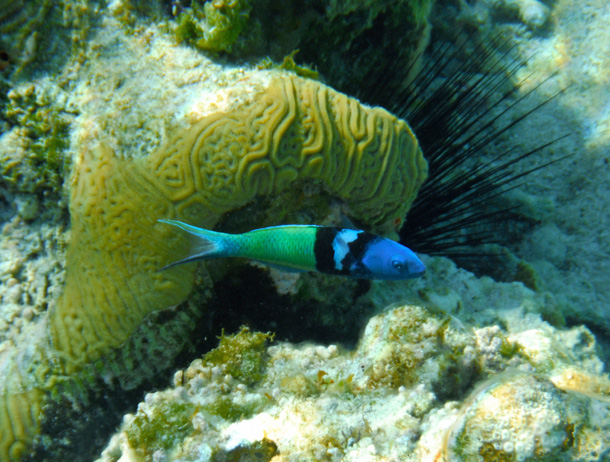 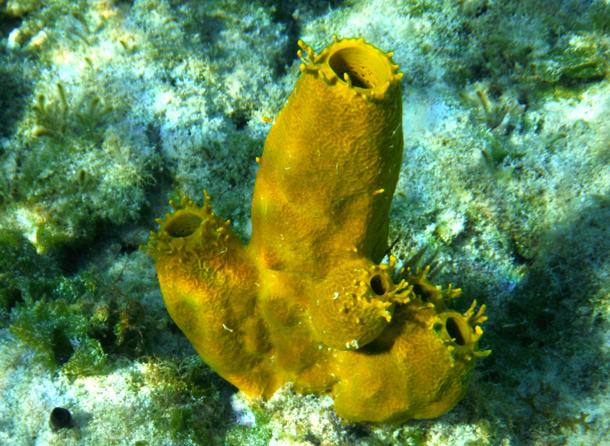 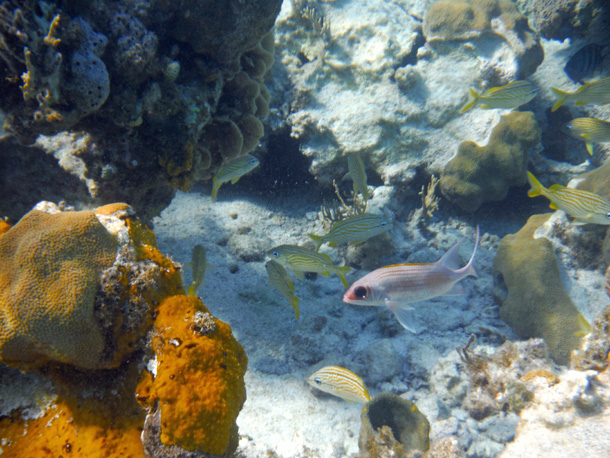 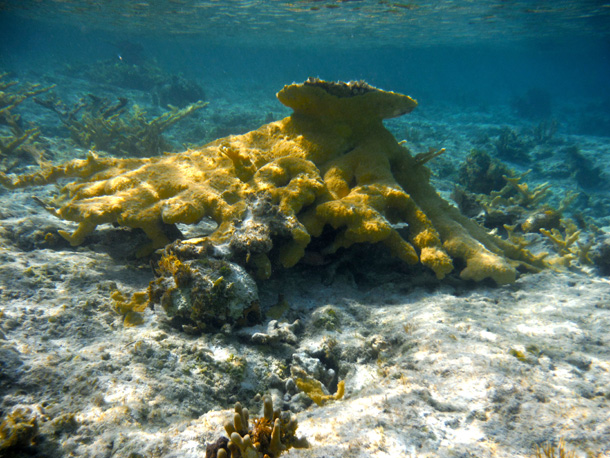 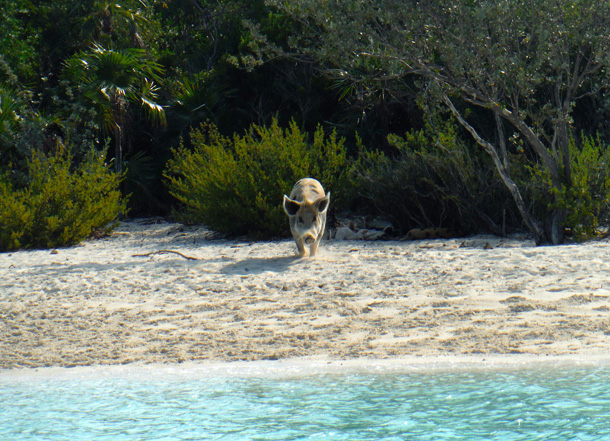 Momma pig comes out for a feeding 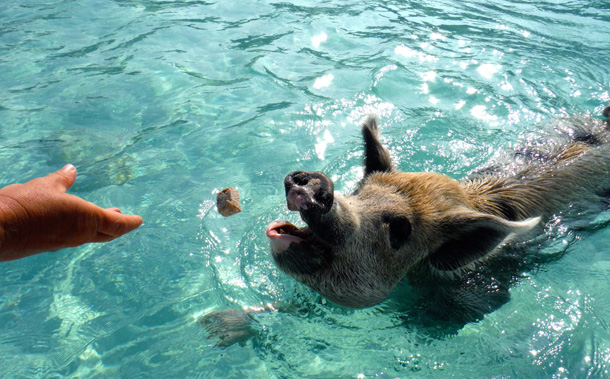 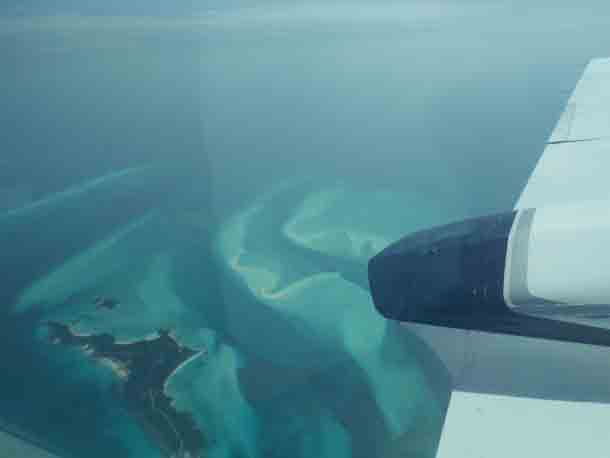 View from the plane on the way back to Nassau 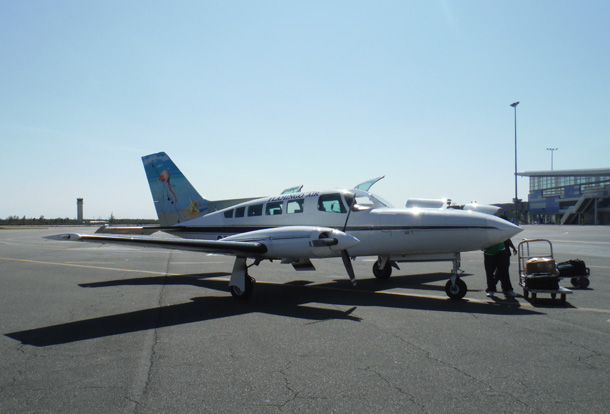 The ‘good plane’ after landing in Nassau

One thought on “Coconut Bread, Crown of Thorns, and Pigs”