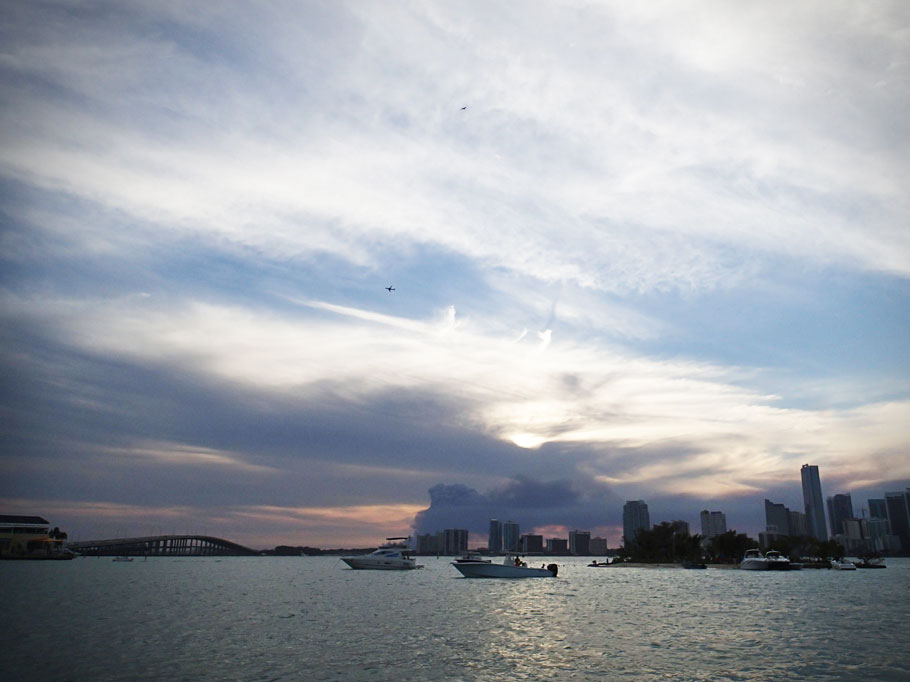 The view from Marina Stadium. The Rusty Pelican on the left, the Rickenbacker Causeway Bridge, and the little island on the right.

We first noticed them coming from the wrong direction, heading towards the mooring ball with the wind on their stern. Three burly guys on a sailboat, one leaned over the side with a boat hook and took a swipe at the pick up line. No luck, the hook went in the water.

The Towboat US guy who towed them through Dinner Key Marina and out into the mooring field looked on from the sidelines. We watched from the cockpit of Blue Wing some 45 or 50 feet away.

Having passed the buoy, they began to back up â€“ stern still in the wind. A second boat hook materialized and they tried again. Greg wondered if he should row over and hand the line up to them. But we had been drinking and the water was choppy, and I didnâ€™t think it is a good idea. Still, I was concerned for our safety, our boatâ€™s safety, their safety, and thought about yelling over to them to turn around, put their bow into the wind, and glide up to the mooring ball, but I didnâ€™t want to confuse them anymore than they already were. We just watched. They would get it eventually.

Greg and I didnâ€™t have tons of experience when we started out sailing. We had taken a few classes and had done a few charters. We have learned so much more from our three seasons cruising the Bahamas, but mostly we stick to what we know and play it pretty safe. But every now and again situations arise that stretch our sailing abilities.

After our visit from our friends David and Michelle, we thought weâ€™d spend a few days anchored off of Key Biscayne and get back to our boat projects. Key Biscayne is just a short distance across the bay from where we were staying at Dinner Key Marina, so we after we saw our friends off, we watered up, pumped out, and set out to motor the short distance across the water. Then the engine died.

As Blue Wing drifted in the middle of the bay, Greg hurried down below to diagnose the problem. I kept an eye on the GPS and watched out over the water, making sure any obstacles we might collide with stayed a good distance away. After not being able to find a fast solution, we decided that it would be best to get some place more secure where Greg could continue his problem solving. We raised the main and I sailed us the rest of the way to Key Biscayne, where Greg dropped the anchor under sail.

Now engine trouble has forced us to anchor under sail only once before. That time we had the added complication of darkness. This time in the bright Miami afternoon sunshine we had the added complication of Saturday. Have I mentioned how much they love the water here? Just days before we had spent a nice calm quiet evening anchored in this same location, but now the anchorage was full of boats of every kind. A couple hundred small sailboats manned by children circled around in the north part of the anchorage and stretching south of this kiddie regatta were jet skis and boats of every size pushing their capacity limits, coming and going from a party scene that culminated on a sandbar that extended out from the southern end of the Island.

I tacked back and forth a couple of times as we approached the chaos looking for a wide, open, quiet spot that would leave a good distance between us and everyone else. Then we sailed in, I turned the boat into the wind, and Greg dropped anchor. I felt immediate relief to be tethered to something solid, in a calm spot away from the revelry. Unfortunately my mental respite was short lived, as a large boat with 40 or 50 partiers came and parked on top of us, blasting music and jumping in the water in front of our bow with their foam noodles.

Greg immediately started on the engine problem, while I started planning our escape from the mayhem.

Despite being surrounded by people and boats I felt completely stranded. I wanted to be somewhere where there were other cruisers, somewhere where we could get to shore, catch a bus, and get help if Greg couldnâ€™t fix the problem. But, of course, we werenâ€™t really stranded; we have a sailboat, right? Yes, we sail the boat from place to place all the time, but we usually rely on the engine for anchoring, going into harbors, down narrow and shallow channels, anything that could be tricky or a tight squeeze. I just needed to figure out where we could sail that had a minimum of these situations.

I perused my mental map of the area. No Name Harbor was basically around the corner. There is shore access and other cruisers there, but the entrance to the Harbor is narrow and no doubt, being Saturday, the small anchorage would be packed. We could go back to Dinner Key, but our boat draft is too deep to anchor close enough in, and getting to the mooring field is a tad complicated, and once in the field the boats are so close together even motoring between them is a bit of a challenge. Then there was Marine Stadium. It was a little farther away, but had shore access and we were familiar with a few of the regular live-aboards that stayed there. Getting to Marine Stadium might pose a few challenges, but I thought we could do it.

The next morning we still didnâ€™t have a motor. Greg had figured out it was a fuel pump problem. We called into the Cruisersâ€™ Net broadcast out of Dinner Key for any possible advice or help. Even if no one could help us, I wanted someone to know we were out there and having issues. We did get some good advice, but also needed to get some parts, so I told Greg about my idea to sail to Marine Stadium. “Let’s do it,” he said.

We raised the main, Greg hauled up the anchor, and we started to sail slowly towards Key Biscayne. Once we gained enough speed, we tacked and fell off to a broad reach. The wind was coming out of the south, pushing us up the bay to our destination. Although we had been having trouble with unfurling our headsail (another story for another post), we were able to get it out part way, which was plenty; I only wanted to sail fast enough to keep our momentum. The Rickenbacker Causeway Bridge loomed up ahead. We were going to cross under it. I find bridges, even tall fixed bridges like this one a little scary, the narrowness, the big hard steel and concrete stuff on either side, and the possibility of other boats traversing the gap at the same time making the passage even narrower and the steel and concrete even closer. Once near the edifice we jibed and I lined us up to go under. There were other boats converging on the bridge at the same time, but they seemed to be aware of us and kept their distance as we sailed under the massive structure. Once on the other side we immediately turned to the east heading up to a beam reach pointing towards the narrow entrance to the anchorage, marked by a small island the left and the Rusty Pelican Restaurant to the right.

We couldnâ€™t see any boats in the harbor, only a large barge near the entrance. There are plans to build a marina in Marine Stadium for the Miami Boat Show next year and we worried that they had started and had chased all the anchored boats out. But as we got closer we saw a few masts and relaxed a bit. On our approached to the mouth of the harbor we furled in the headsail in order to slow down. The barge was just inside, directly in my path. I thought about passing south of it, but that would have put me on a slower point of sail and close to the shore, so I fell off the wind a little and headed behind it and even through my chart showed shallow water ahead surrounding the little island, I felt somewhat confident about the depth because it was high tide. There was plenty of water.

Once clear of the barge we looked for a spot to drop the hook. The anchorage wasnâ€™t real packed, but because we had furled the headsail, I didnâ€™t feel like we had enough sail power to do much tacking around the boats, so we continued a little further on our course until we felt we had a good distance between ourselves, the island, the barge, and the other boats, then turned into the wind and dropped the anchor, safely and securely in Marine Stadium.

Just the morning before I was hoping to see our neighbors who were towed into the mooring field at Dinner Key. We wanted make sure they were OK and find out their story, but when it came time for us to leave, their boat was quiet and there was no sign of them. We had had a brief interchange with them the night before when they had finally hooked the pick up line and had settled up with the Towboat US guy. One of the trio yelled over to us, telling us that they had just bought the boat and asking for advice on how to tie up to mooring ball. We hollered back some instructions. They fooled with the ball for a while in the fading light, but didnâ€™t have the right type of line to tie it correctly. Sometime after dark we went below. Over on our neighborâ€™s boat, in the shadows, we saw a figure sitting on the bow watching over the mooring.

For us, everything ended up well. Greg was able to go ashore and catch a bus to get a new fuel pump. We had an engine again and I ceased thinking about the route we would take it we had to sail all the way back to Stuart and Sunset Bay Marina.

(Actually, when we bought the boat a spare fuel pump was included in the deal. But when Greg installed it, it didnâ€™t work.)

One thought on “A little sail”