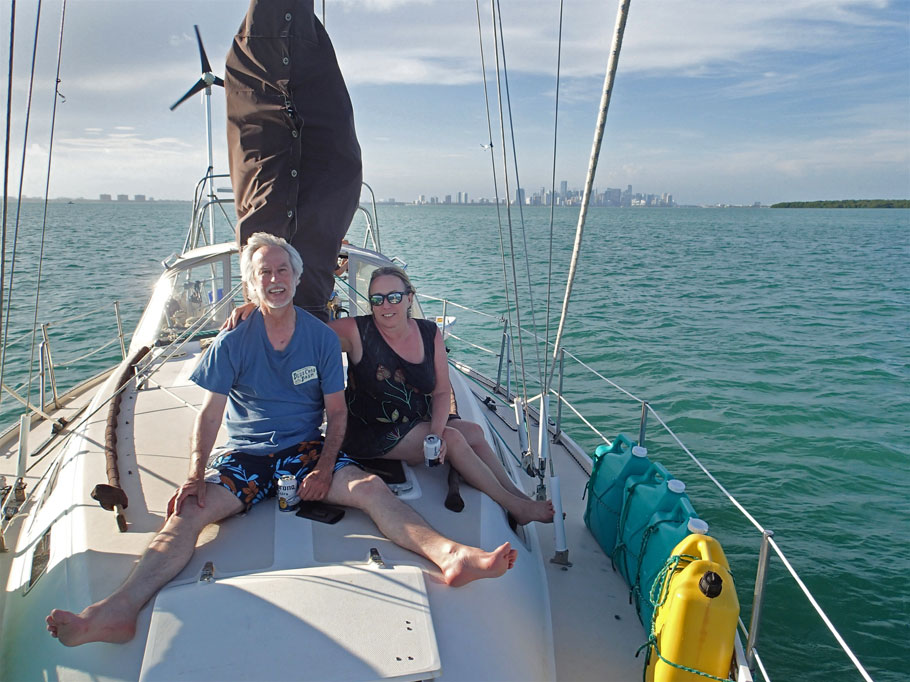 David and Michelle afloat aboard Blue Wing in Biscayne Bay, with Miami lurking in the background.

We love to share our sailing journey, so when our friends David and Michelle asked if they could come see us while we were in Miami, we said, â€œCome on!â€

As their visit grew near I started to worry. We had spent almost all of our time in Miami working on the boat and really knew little about the place. What were we going to do? Where would we go? What if the anchorages were too rough? What if the head grossed our friends out? What if they if they didnâ€™t get the whole conserving water thing? What if they wanted showers every day? What if they needed more space? What if more things broke?

But I forgot that our friends are campers. And that the things that are mundane, boring, difficult, frightening, and unknown can be adventure for people who donâ€™t live on a boat. And sometimes just floating on the water, hanging on a hook, watching the sun slowly drop from the sky and pop up on the other side each day can be all the excitement one needs. 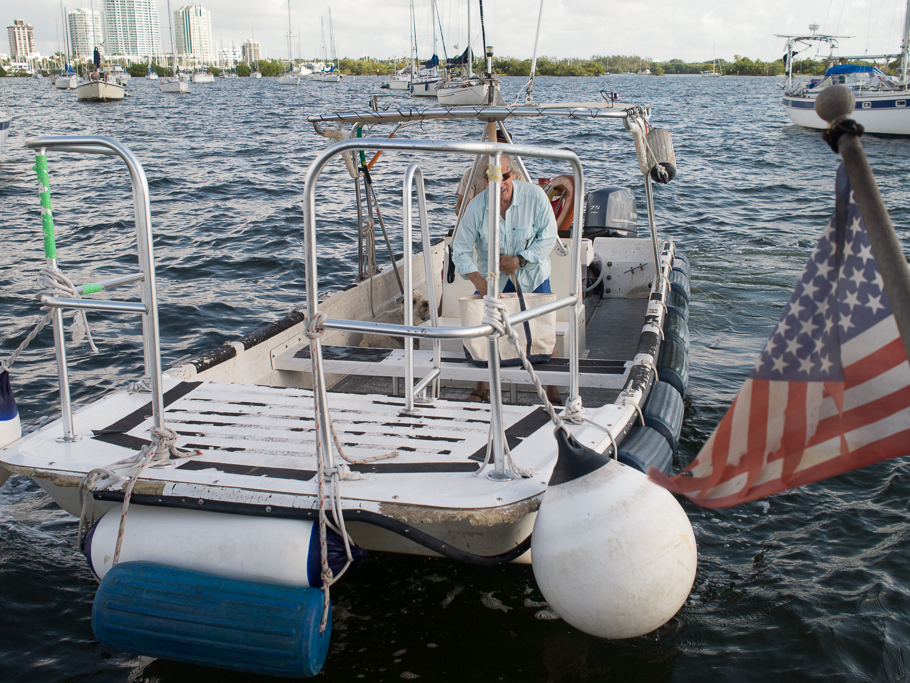 It wouldn’t be a sailboat adventure without problems and the problems for David and Michelle’s visit started as soon as they hit the water. Our dinghy motor wouldn’t start. Luckily we have oars so we rowed out to Blue Wing. The next day were able to utilize the shuttle at the Dinner Key Marina (where we had rented a mooring ball for D & M’s visit) to get from the boat to shore (to take showers and provision [buy beer]) and back again. – photo by David Littlejohn 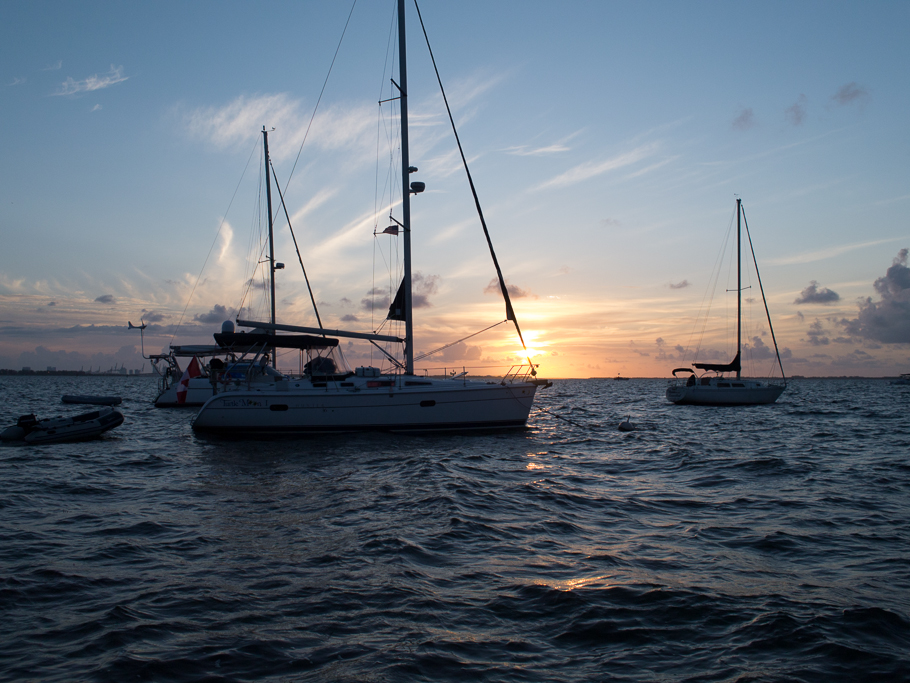 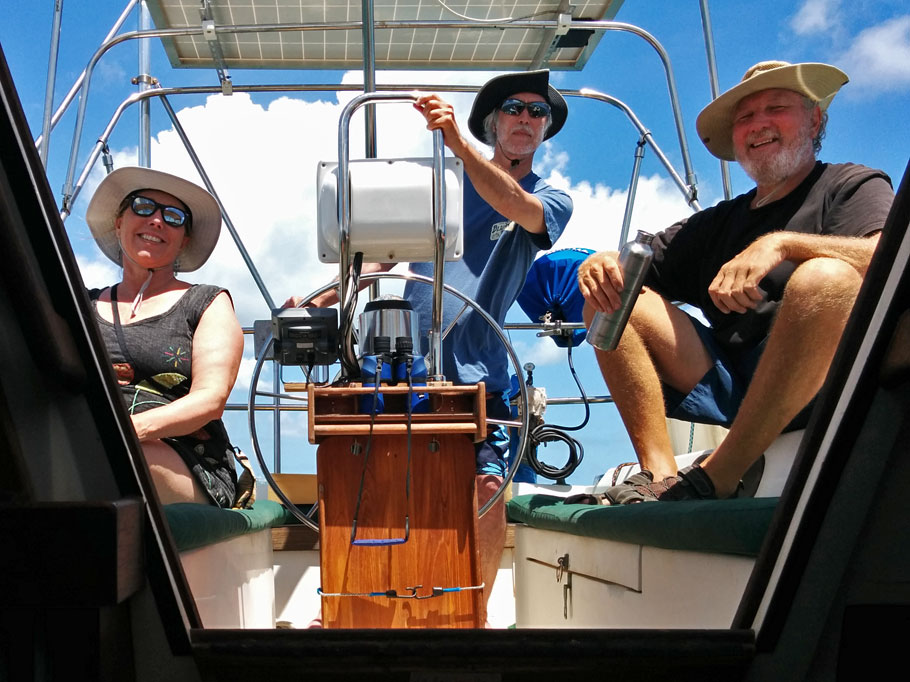 David takes the helm as we sail on Biscayne Bay. 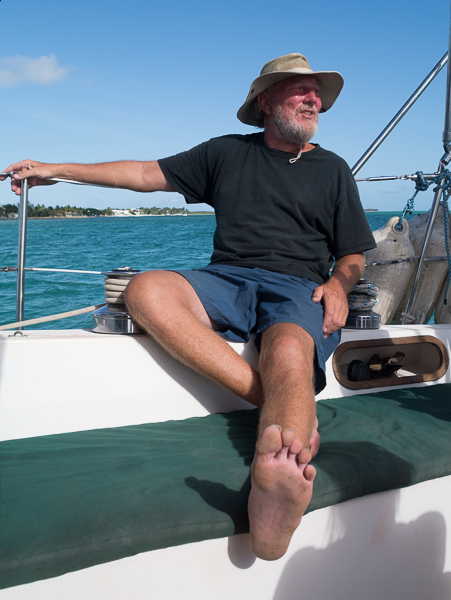 Greg lounging on deck after a relaxing sail across the bay. – photo by David Littlejohn 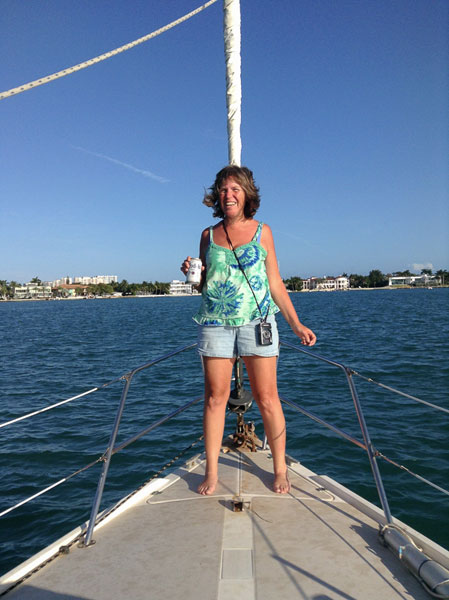 Duwan at anchor off of Key Biscayne. – photo by David Littlejohn

Hanging out below decks. **Click to enlarge this picture** 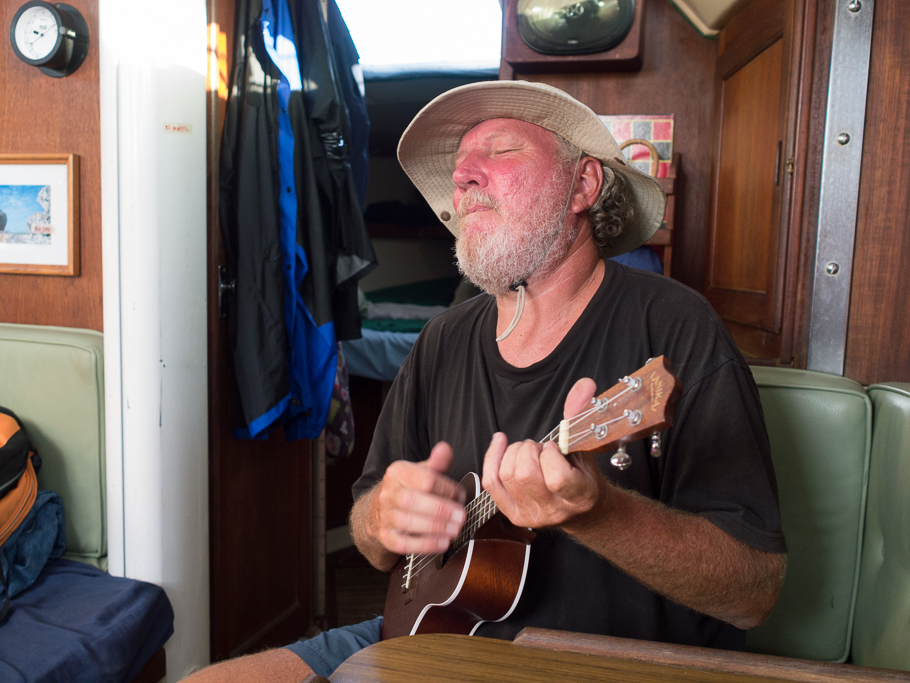 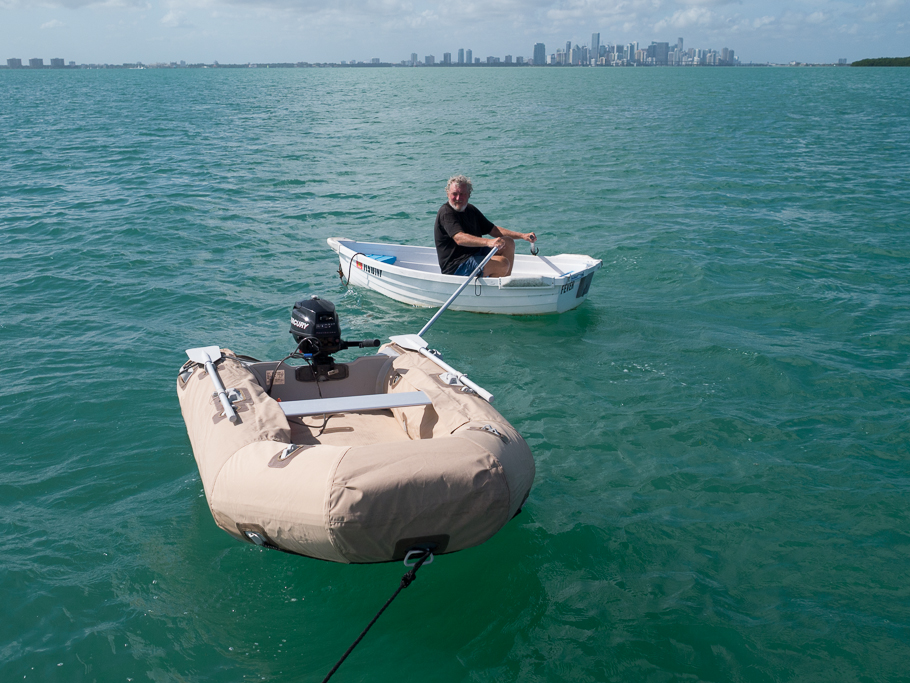 Greg rows out to rescue a green float drifting in the water. We called out on the radio, but no one claimed it. It got loose during the night, but we saw it again the next day on another boat tied up in No Name Harbor which was being crewed by an acquaintance of ours from Sunset Bay Marina in Stuart. It’s a small world when you live on a boat! – photo by David Littlejohn 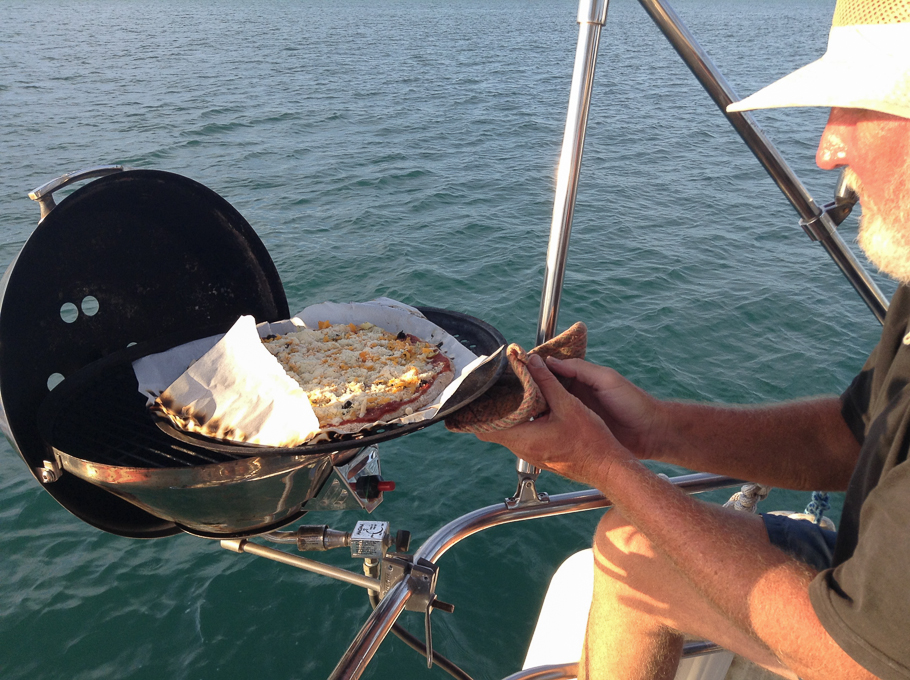 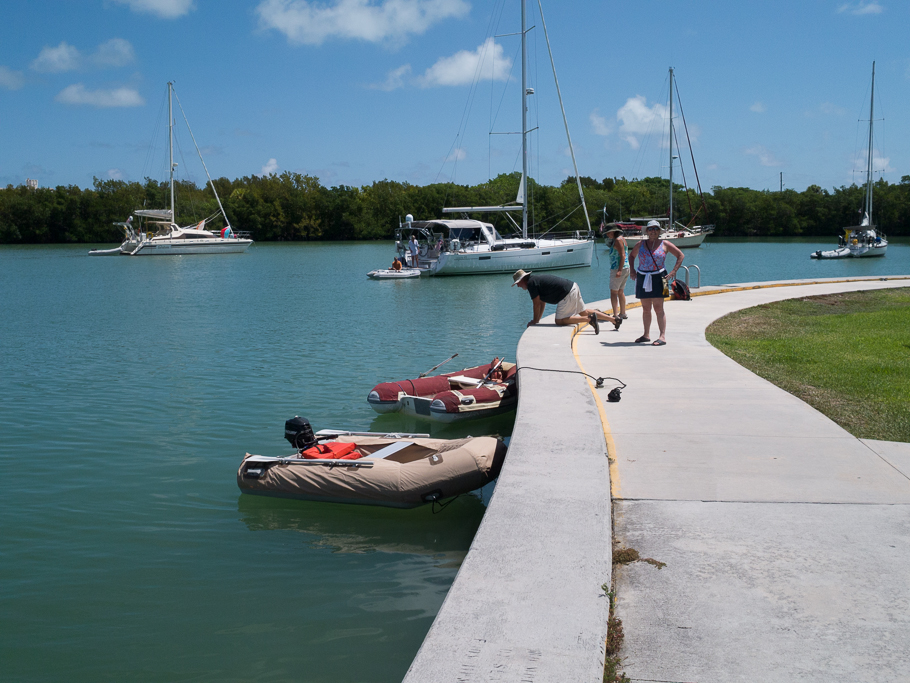 A little trip ashore. Greg secures the dink, Jethrine, at No Name Harbor – a haven in the past for pirates and smugglers, but now serves mostly as a weekend destination for Miamians and a jumping off spot for cruisers heading to the Bahamas, as well as a great place to see manatees, dolphins, fish, and tropical birds. – photo by David Littlejohn 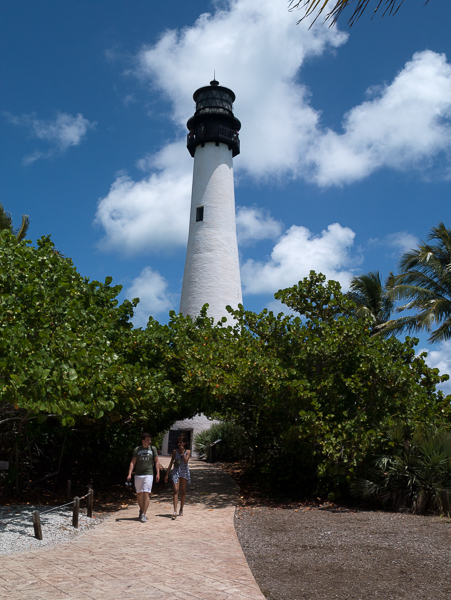 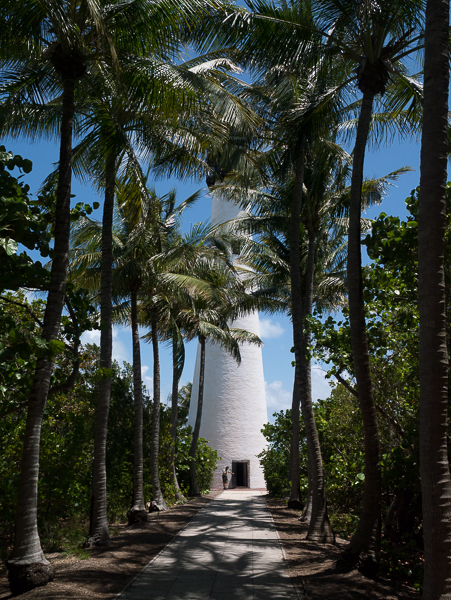 And another view of the lighthouse. – photo by David Littlejohn

The lighthouse over looking the beach on Key Biscayne. – photo by David Littlejohn **click to enlarge this photo** 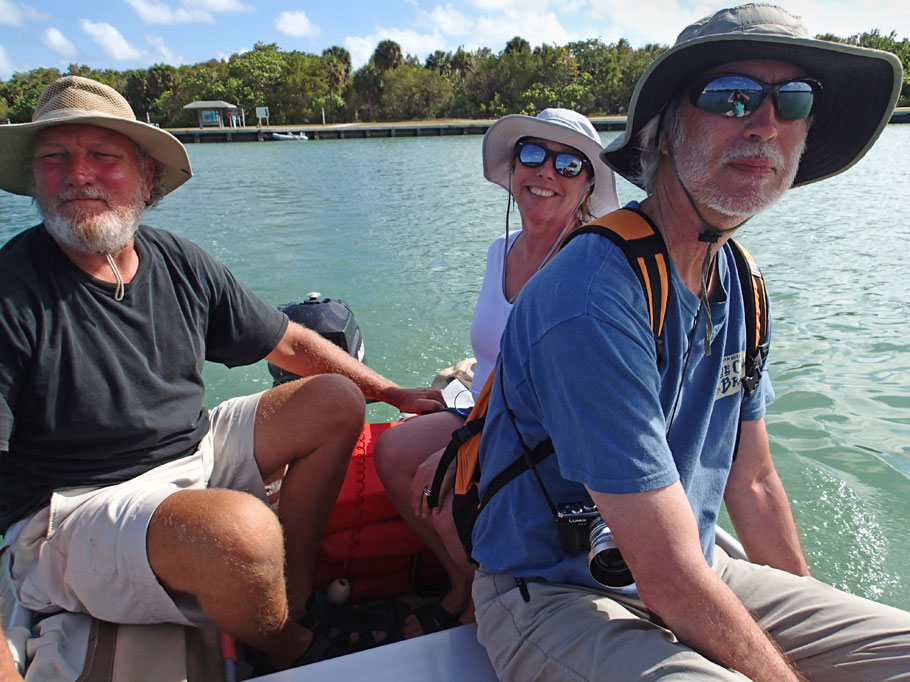 Dinking back to Blue Wing in No Name Harbor. (Greg fixed the outboard earlier that morning.) 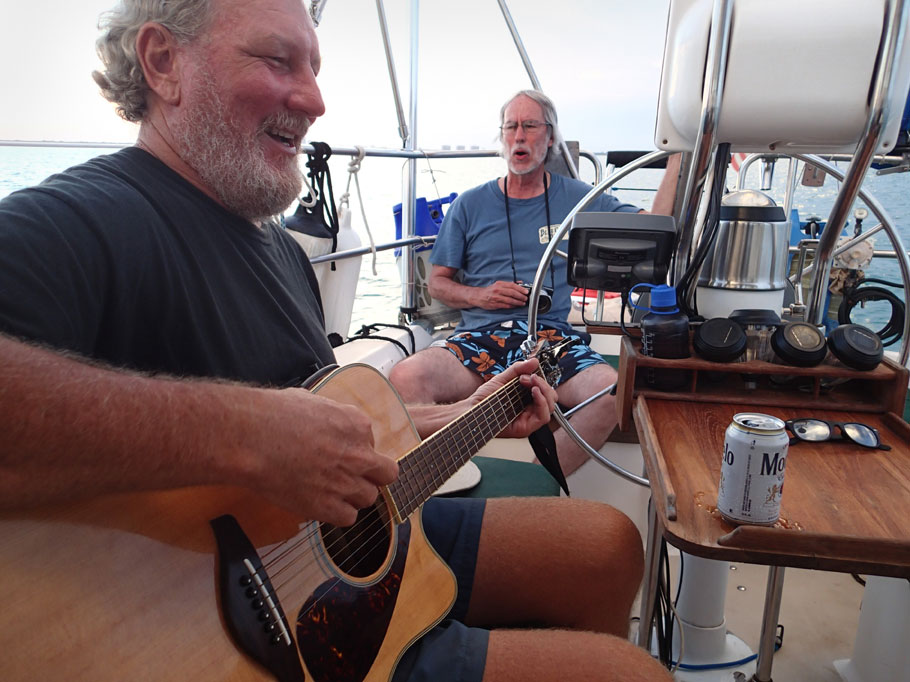 Jamming out on the boat – Duwan’s view. 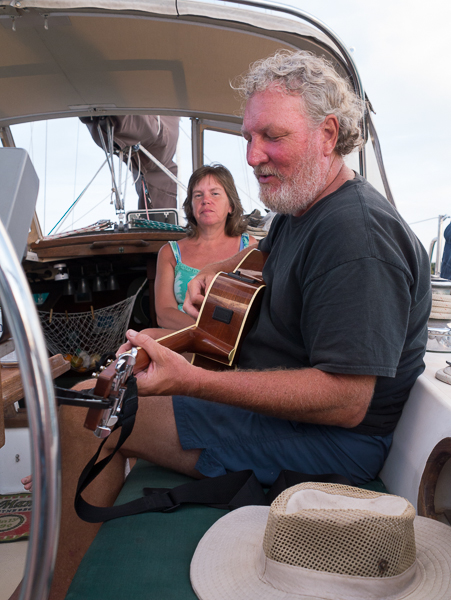 Jamming out on the boat – David’s view. As usual Greg has more fun than everyone else combined. – photo by David Littlejohn 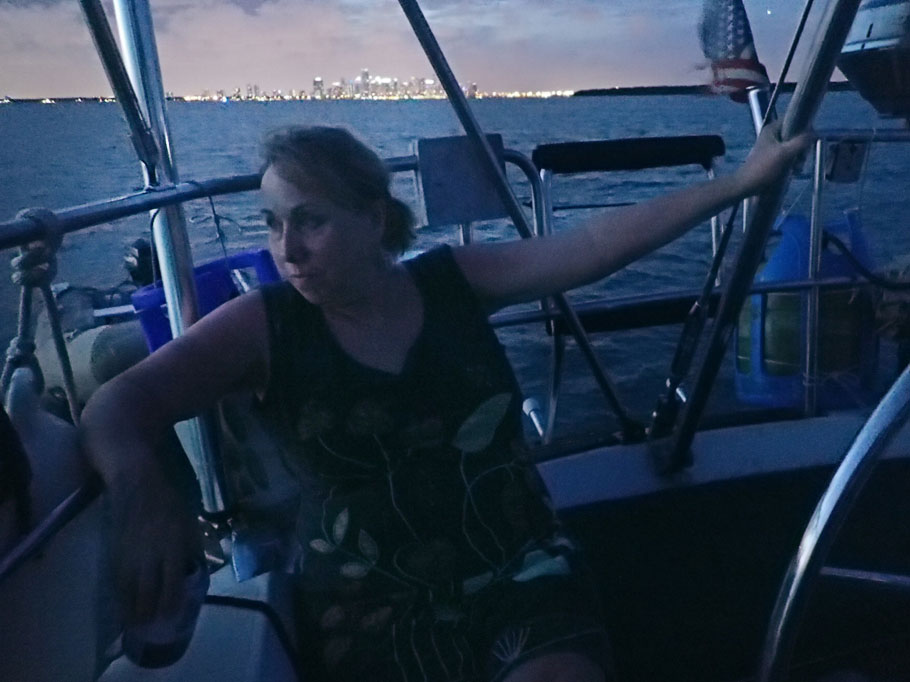 Michelle looks out over the bay as the night sky darkens and Miami lights up in the distance. 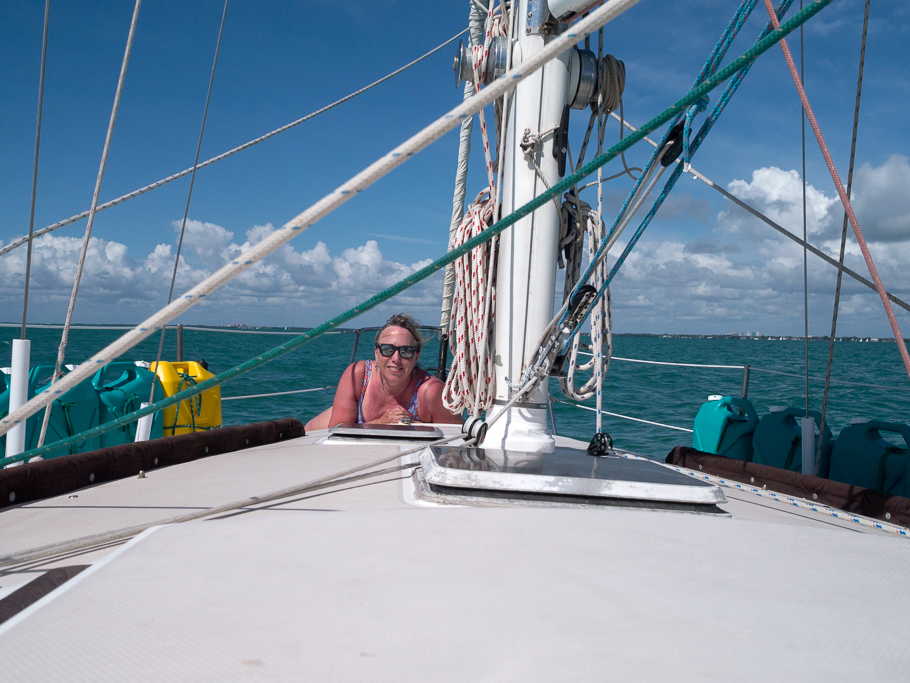 Another day of sailing. Michelle works on her “burn.” – photo by David Littlejohn 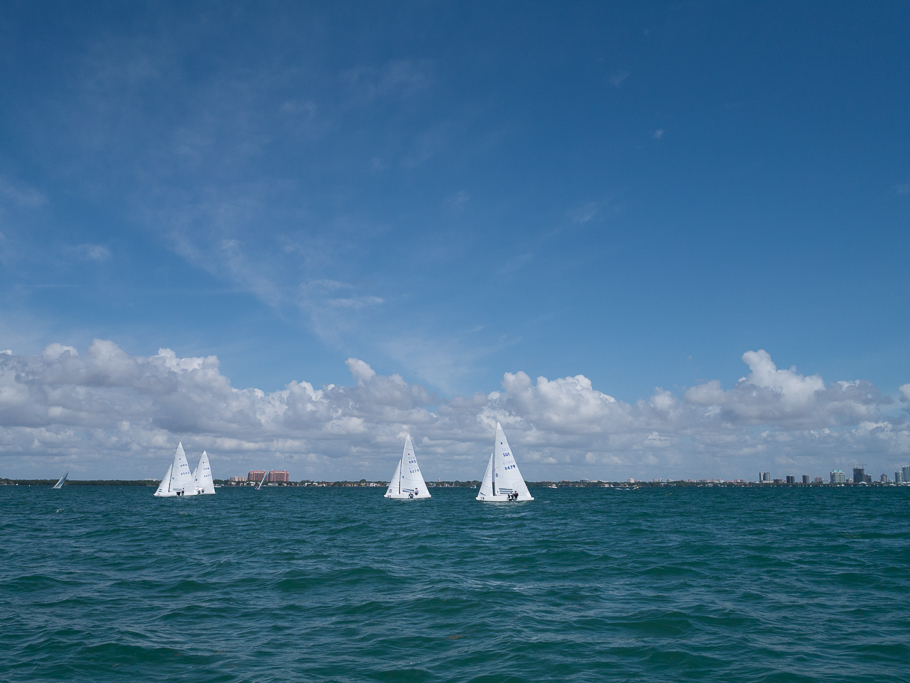 Biscayne Bay is a busy place. We we in the middle of a regatta before we realized it – the International Star Class Western Hemisphere Regatta, with 38 teams from 7 countries competing. – photo by David Littlejohn 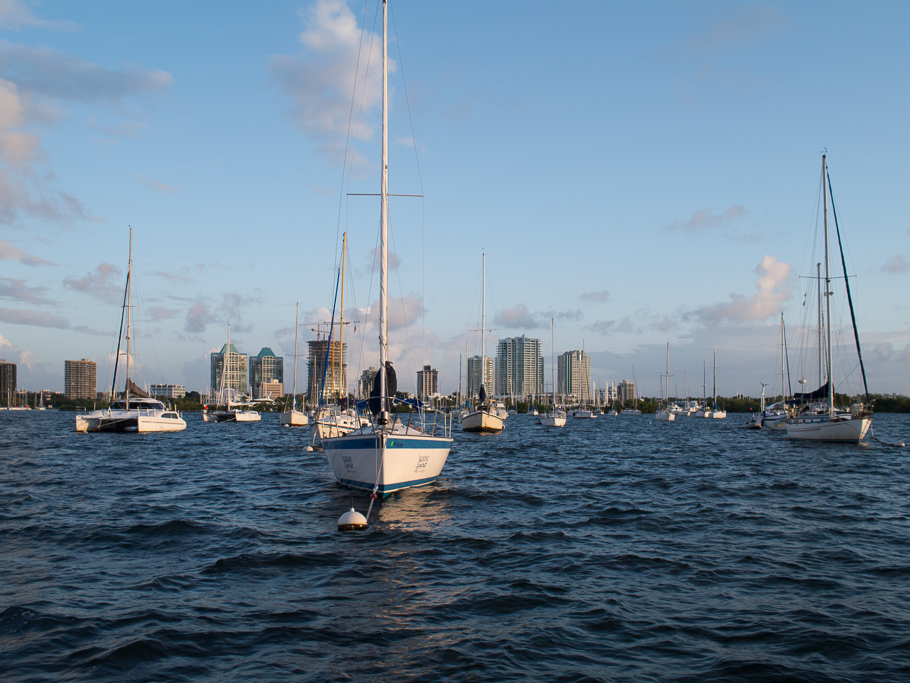 Back to the mooring field at Dinner Key. – photo by David Littlejohn 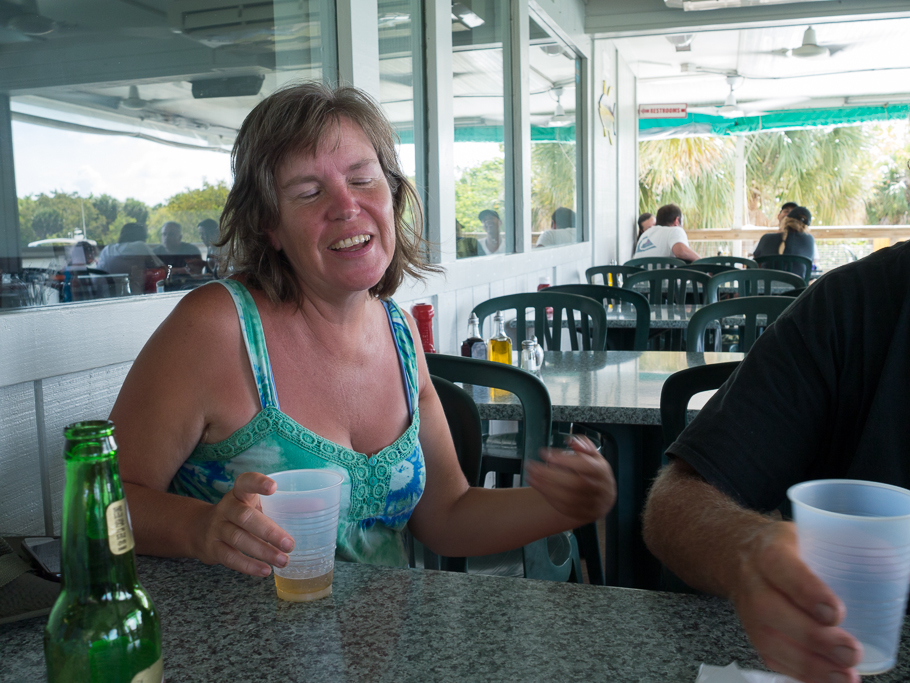 The last night, David and Michelle treated us to dinner off the boat. — photo by David Littlejohn 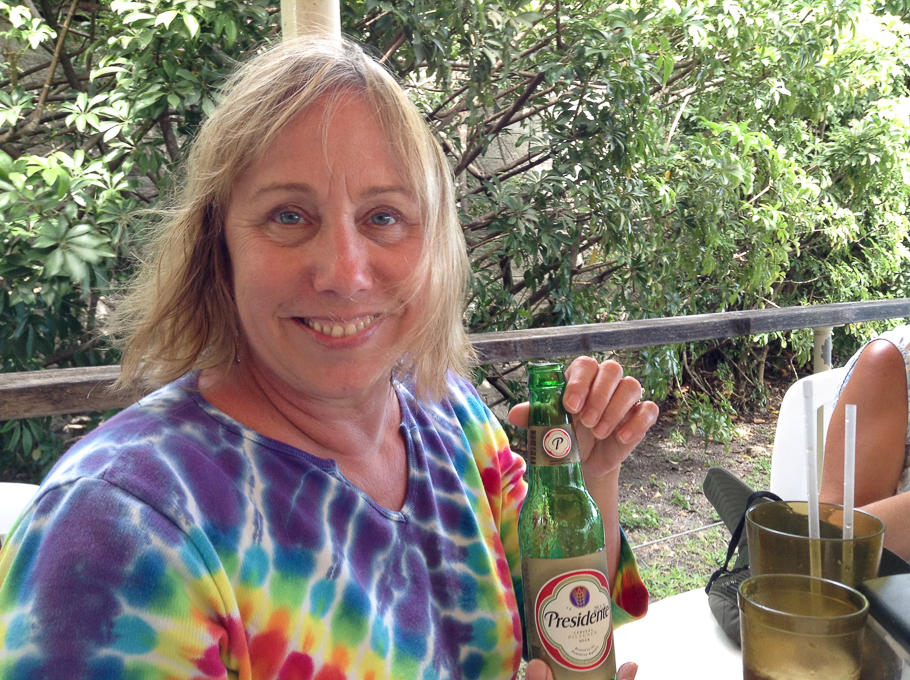 Continuing to have fun taking pictures and playing with the panorama features on our cameras. – photo by David Littlejohn **click to enlarge this photo**

4 thoughts on “David and Michelle Visit!”