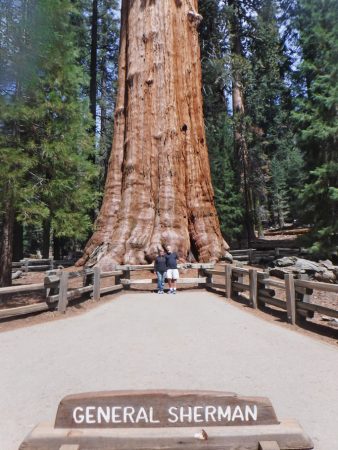 We pose at the base of the most voluminous tree in the world. Though it has female and male cones, has lived 38 times longer, and has been burned so often it wouldn’t think of setting fire to Atlanta, it has been dubbed General Sherman.

At Sequoia National Park’s visitor center we learned that snow was expected at the higher elevations. Tire chains would be required if we camped above 4,000 feet. So we reserved a site at Potwisha campground (1,700 feet), and drove uphill to see as many big trees as we could in one day.

But I was completely surprised to learn how amazing these trees are. First, they become the largest trees in the world (by volume, not by height). Second, because they live thousands of years. And last, because they thrive on adversity.

What other species benefits from being burned up every few years? Forest fires bake the female cones, making them open and release seeds. The seeds are more likely to germinate in ground covered in ashes. Fires burn up competing underbrush. And fire resistant Sequoia bark heals over burnt scars on the trunks.

We had plenty of time to hike through the trees. We also made it out to Moro Rock. From there you can get a good view of the surroundings.

Right now, this very minute, we are sitting on a New Mexican hill in a little slice of nowhere. Although I can see the highway from here, I don’t think they can see us. No one is camped within a couple of miles of us. All we can see any way we look, just desert and hills. 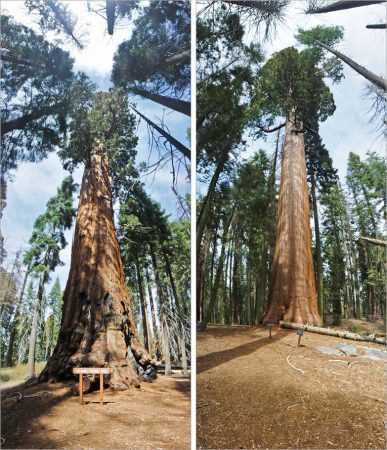 Sequoias now only grow naturally in damp environments at elevations between 5,000′ and 7,000′. They once covered much more of North America and even Europe. The oldest living Sequoia is 3,200 years old, and was alive when Ramses II was pharoah of Egypt. 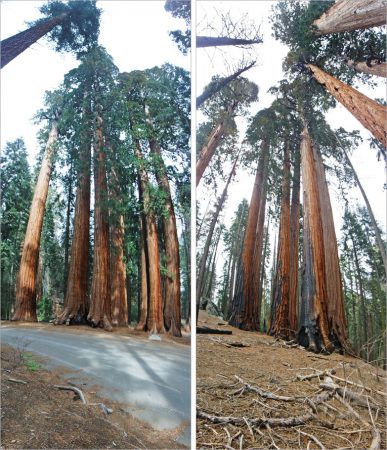 Cones may hang on a Sequoia for 20 years. Fires will cause the lower female cones to open. The upper male cones fertilize the seeds. Then a mature tree can drop up to 400,000 seeds (about 43 pounds worth). As you can see, the trees don’t need much personal space. 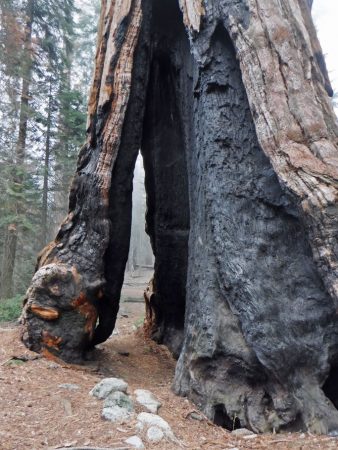 This tree was burned so badly you can walk through the damaged area. The bark, which has a spongy cyprus-like feel, starts to grow over the scars. The bark can be a couple of feet thick on mature trees. When the base is damaged like this, the crown of the tree dies due to lack of circulation. From then on the three just grows wider and wider. 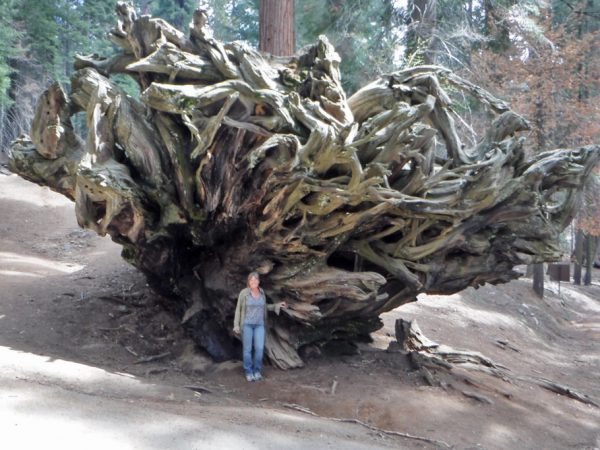 This root system looks pretty large next to Duwan, but it doesn’t seem big enough to support a Sequoia on a hillside. And there’s no tap root. The most likely cause of death for a mature Sequoia is toppling. 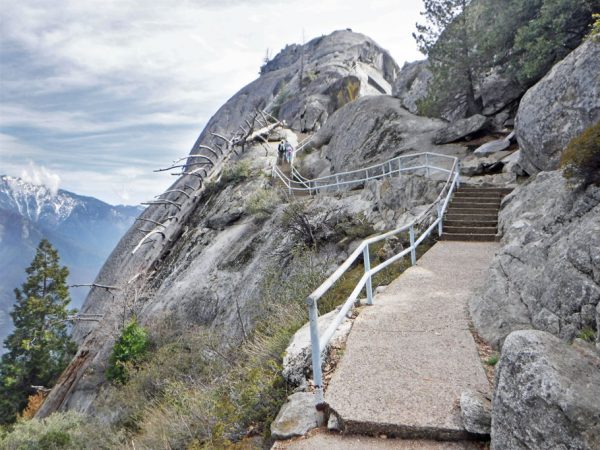 Stopping for a breather on the trail to the top of Moro Rock (elevation 6,725′). The route is 1/4 mile, with a 300′ climb in elevation. No straying off the path as Peregrine falcons nest here. (But we didn’t see any.)

Looking back east to the Sierra Nevadas from the Moro Rock trail. The edge of the Sequoia forest is to the left. Mt. Whitney is behind the peaks in the distance. Just a little farther are the Alabama Hills we visited. You don’t drive straight across, though. Like us, you skirt the mountain chain and pass through Bakersfield to the south. 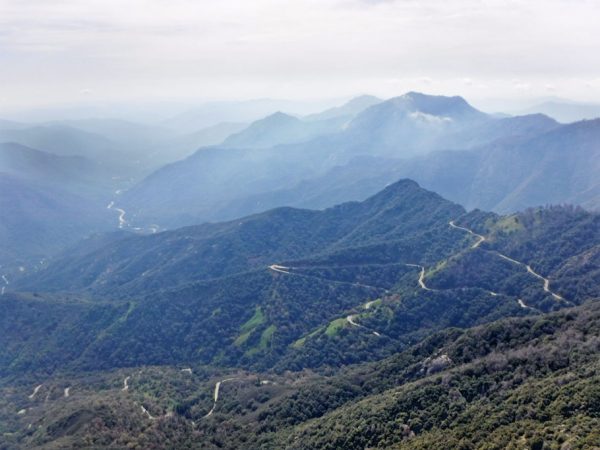 Looking southwest toward the Foothills Visitor Center from the top of Moro Rock. The General’s Highway makes its 5,000′ climb up, and the Kaweah River rushes down (left). 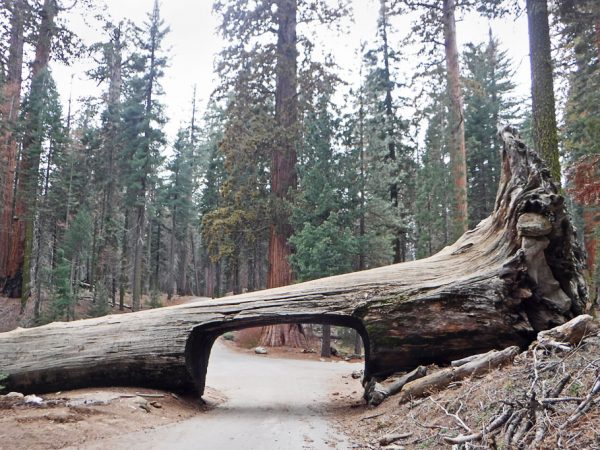 When this tree fell in 1937 the CCC cut an 8′ high hole in it so cars could drive through. At another spot visitors could drive their vehicles up onto a fallen tree and have their pictures taken. The Park Service has changed over the years. Now their hands-off approach is to preserve what happens naturally whenever possible.