Misión Santiago de Jalpán. One of five UNESCO World Heritage churches built shortly after 1750. All merge the general design of Fray Junípero Serra with the skills and cultural symbols of the indigenous people who did the construction. Upper left in the facade is the Virgen de Guadalupe.

Sierra Gorda is a 95 square mile biosphere reserve spreading into four Mexican states. The terrain here is rugged. There are many waterfalls. And there are caves from which thousands of birds leave in the mornings, and return at night.

We planned to visit waterfalls and caves, but the weather turned gloomy. It’s no fun seeing waterfalls in the rain. And birds don’t leave the caves. But here are some pictures of what we did see. 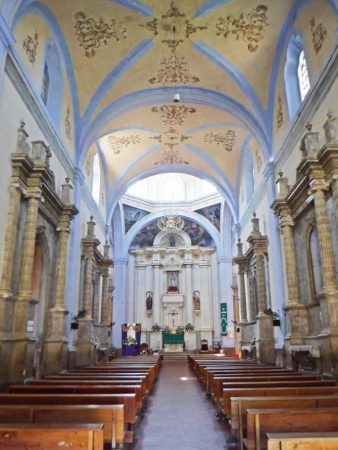 In 1531 a Mexican peasant named Juan Diego said the Virgin Mary appeared to him several times, asked to be called the Lady of Guadalupe, and left her image on one of his garments. Some of the clergy accepted his tale, and others were more skeptical. When these churches were built, she was something of a controversial figure. By the time of the revolution, though, she was embraced as a figure who legitimized Mexico’s unique identity. 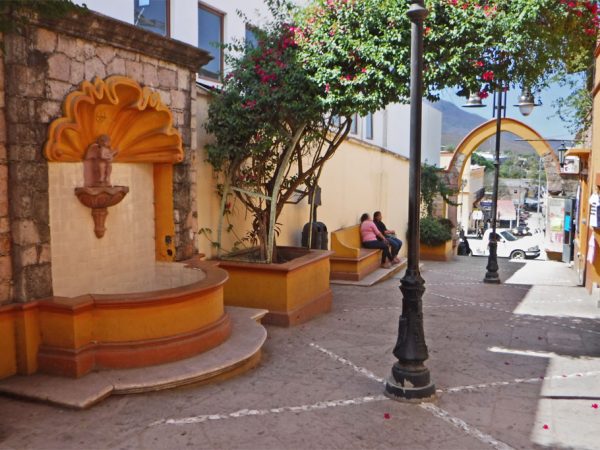 One of the streets fanning out from the Jalpán mission. All have colored stonework similar to the church. 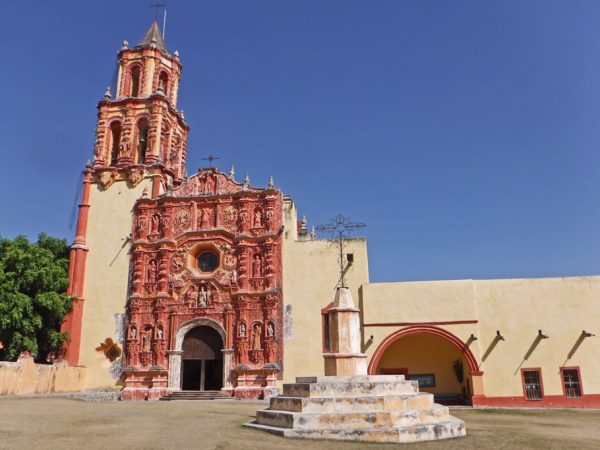 The Misión Santa María was also on our route. This is an active church, as are the others. 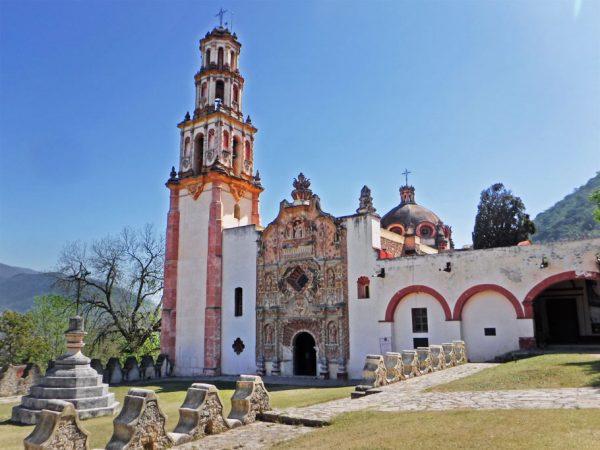 We deviated from the route down miles of unpaved road to get to our third and last mission, Misil Francisco de Tilaca. 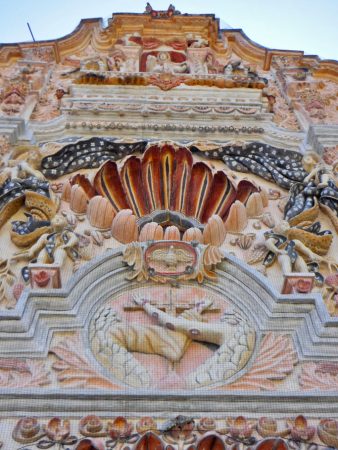 In the center is a dramatically scalloped window with a Mexican eagle underneath. Below the eagle is the Franciscan symbol of the arms of Jesus and Francis nailed to the cross. 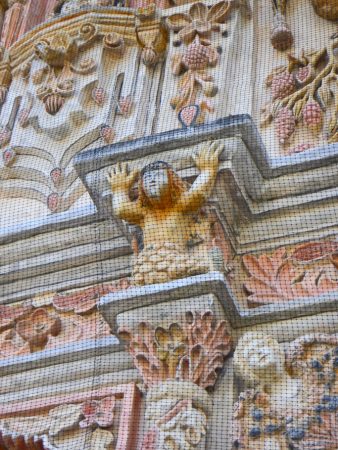 Decorations of local plants and a mer-person holds up a cornice. 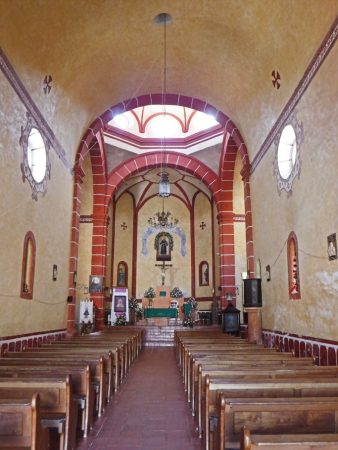 The Tilaca mission is still central to the community. While we were there a man went into a government office in the courtyard, took care of business, and walked out crossing himself. 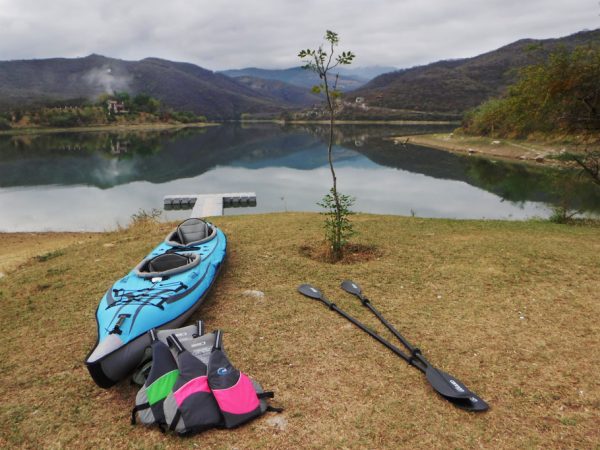 Our campsite in Jalpán was near a Presa (or dam). The water was perfect for a kayak excursion. 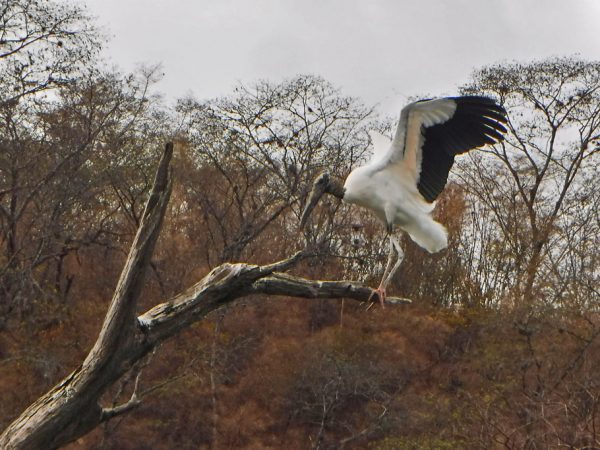 We paddled the river until it got too narrow. There was plenty of wildlife to see.

Crane by the river. 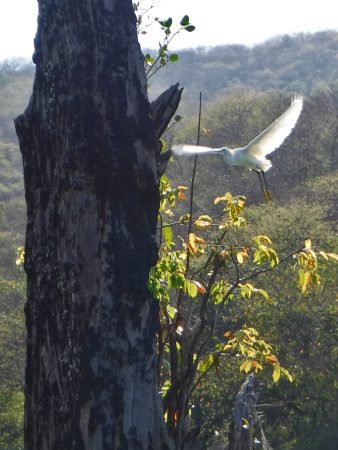 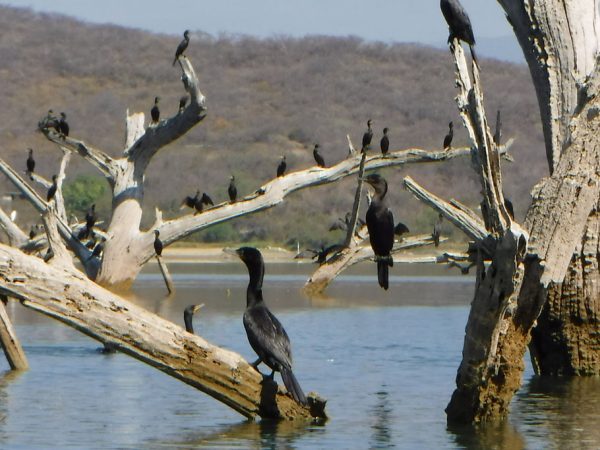 There were lots of dead trees in the river, with birds roosting. 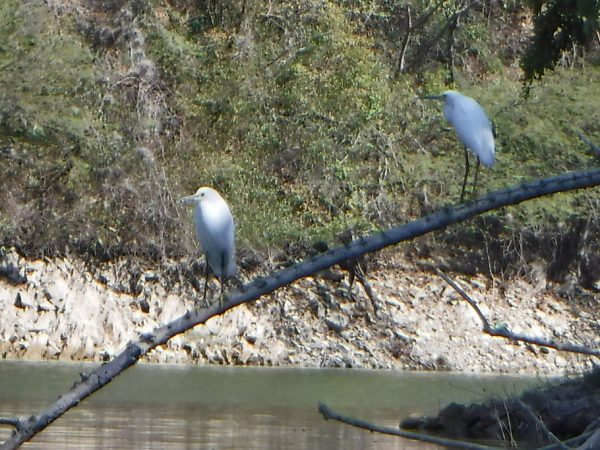 These guys let us get pretty close.

But too close, and they start to fly away. 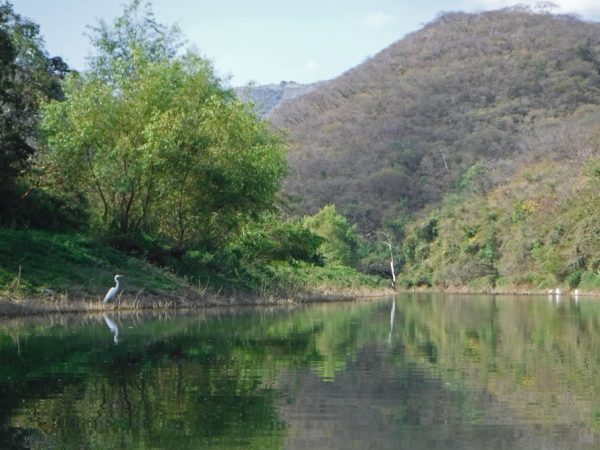 4 thoughts on “Into the Sierra Gorda”