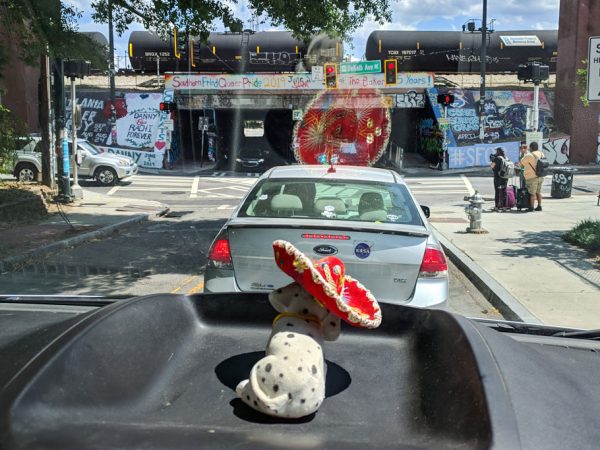 Ready to go through the Krog Tunnel into Cabbagetown. This is the only exit/entrance to Cabbagetown on the northern edge of the neighborhood. The tunnel is a grafitti/street art haven (the authorities look the other way) and the canvas changes almost daily.

One day many years ago when Greg and I owned a house and lived in Cabbagetown full time, Greg was walking down the street and saw a neighbor round the corner with a jar of salsa. She was having trouble with the lid and figured if she walked out of her house with it she would run into someone who could help her out. Greg opened her jar and she returned home. Our lives in Cabbagetown for the last 8 years have gone something like that. Many times we have shown up in the neighborhood not really knowing where we would go or what we would do but we always knew that if we just drove under the iconic Krog Tunnel that led to the neighborhood it would all work out.

Actually we never planned to come back to Cabbagetown, Atlanta, or even the US when we first left to go sailing. But really the truth is we really didn’t have much of a plan at all. Then during that first sailing season, I ended up being seasick all the time. Then things started breaking on the boat. Living the life was became hard so we decided to take a break, dry dock Blue Wing, and return to Atlanta for the summer. A friend put us up and just when we decided that we couldn’t stay with her the whole summer another friend asked us if we wanted to house sit, then another, and another, etc. Greg started doing odd jobs and our summertime routine started to take a life of its own.

Our third summer back Greg teamed up with another neighbor, Paul, who did painting. Together they started a very informal, but eventually very busy business. By then our yearly migration back to Cabbagetown was becoming a thing. People booked house sitting early – sometimes a year in advance. I often had to tell people no when we already had sits scheduled. Paul, who could get painting jobs just by walking around the ‘hood, started saving up the really big jobs for Greg’s return.

This year we had no worries about where we would stay or what we would do when got back. Our house sitting calendar was full except for a handful of days and Greg and Paul had more work than they would be able to accomplish during our four-month stay.

It was all working out to be just another normal summer until I set up some spreadsheets, looked at our bank accounts, examined potential retirement income, and crunched the numbers. Our return to Cabbagetown this summer, at least money-wise, was actually superfluous. After many years of coming back to town from sailing broke, we were finally ahead.

We love Cabbagetown, all our friends there, and all of the pets we’ve gotten to know over these past 8 years of house sitting, but we also want to travel in the summer when we can go north to places like Oregon, Washington, British Columbia, and Alaska! So we decided to make this past summer in Cabbagetown our last.

It feels like we are really leaving this time but everyone knows we will be back – just for a visit, a few weeks in the fall maybe – perhaps a short house-sitting gig or if there is a really interesting idea about painting a house, Greg might do that too.

A little tally of numbers for the past 8 years —

See a gallery of all of our pets here.

13 – Number of house exteriors Greg and Paul painted in Cabbagetown  (this doesn’t count houses they painted outside of the neighborhood or the numerous porches, fences, and interiors that they painted.)

See a gallery of all Greg and Paul’s Cabbagetown houses here. 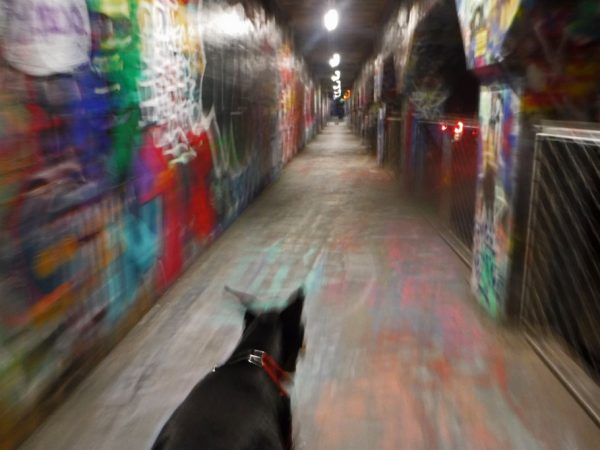 Early morning walk with Jasmine through the iconic Krog Tunnel. It might be a little scary this time of the morning but not when you are walking a Doberman Pinscher. 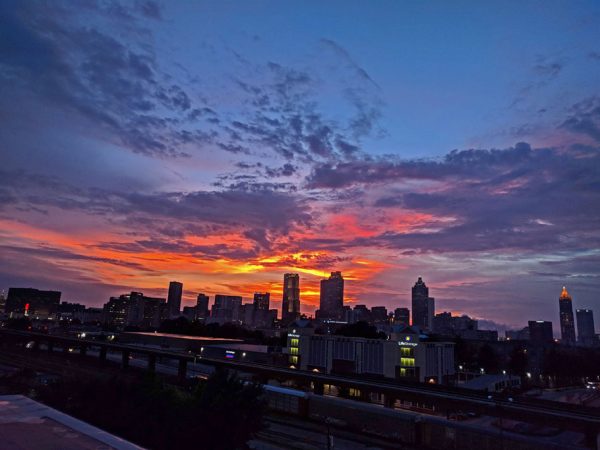 The Atlanta sky line from the roof of the Stacks Lofts. These lofts used to house the Fulton Bag and Cotton Mill which was the main employer for the people in the adjacent community, Cabbagetown. 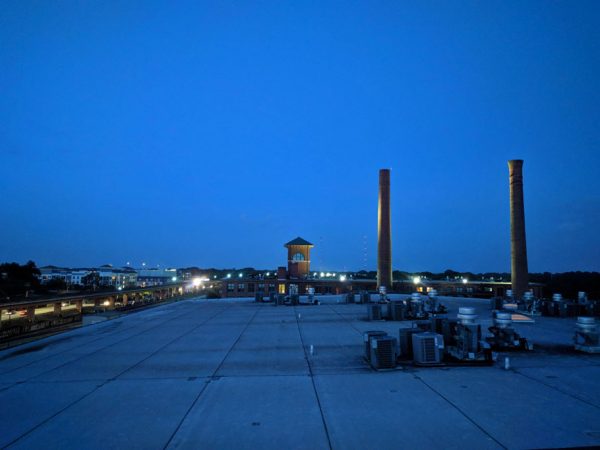 View of the mill’s stacks from the top of the lofts. 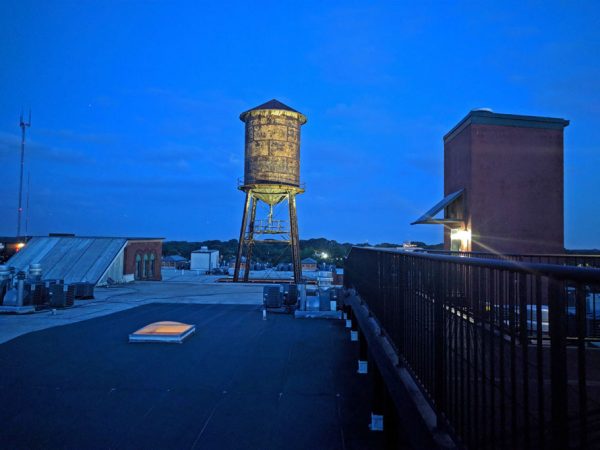 View of a water tower from atop of the Stack’s Lofts. 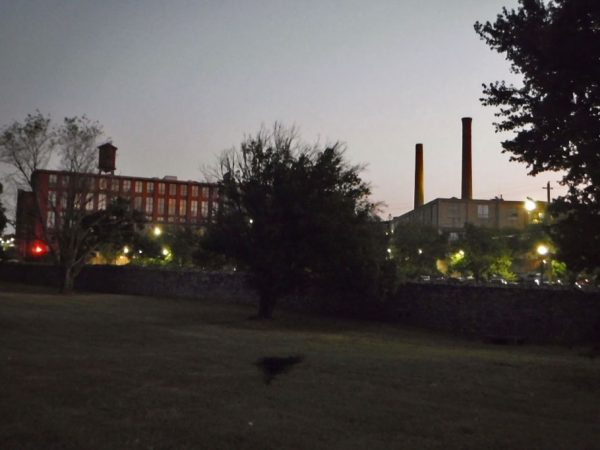 A view of the Stacks from Oakland Cemetery during the early hours of the morning. That black blur at the bottom of the pic is Jasmine chasing her beloved tennis ball. 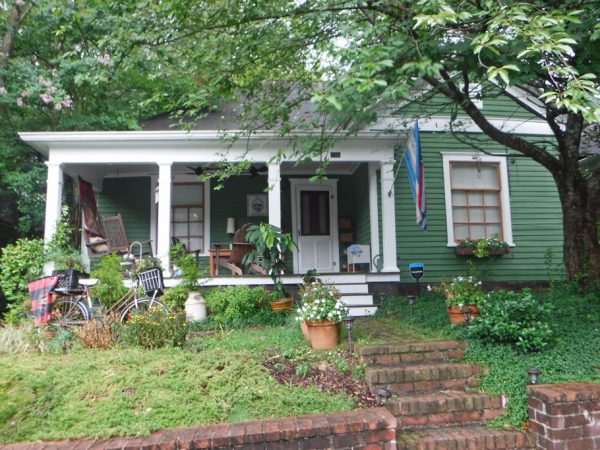 Fresh paint on Claudia and Scott’s house. All of Greg and Paul’s painting jobs, except for one, were in the neighborhood this summer. This job was the easiest commute as we were house sitting there for part of the job. 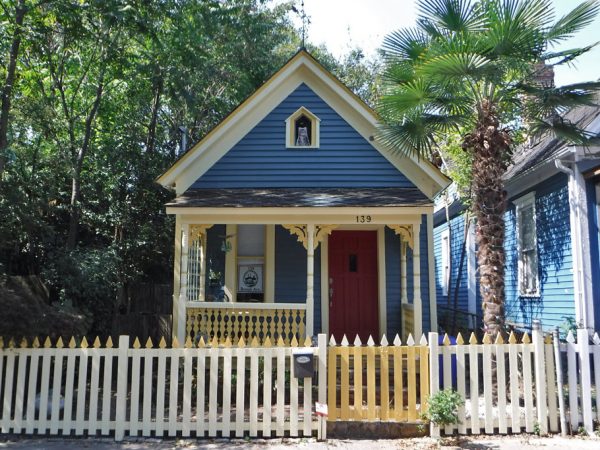 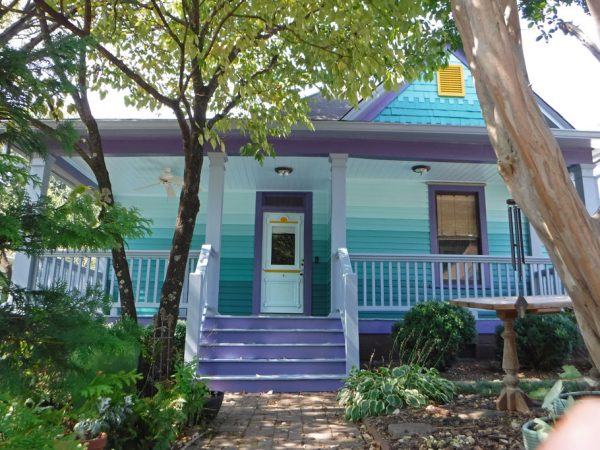 Greg and Paul’s tour de force. Anya and Jimmy knew they wanted to do something different with their paint job but weren’t really sure until what until Anya saw it all in a dream. Greg and Paul made that dream a reality. Thirteen different colors went on this (possibly first ever) ombré house. 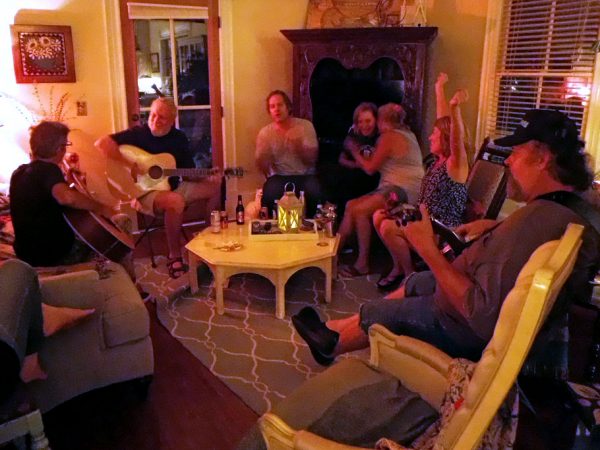 One of the things I love about coming back to Cabbagetown each year is making new friends. Often times these are people new to the neighborhood or sometimes like this year someone we have know for a long time. When we first moved into the ‘hood Greg and I lived directly across the street from Richard and Sandy. They were good neighbors and I think we talked about having a happy hour together once but never did. After we left Cabbagetown we would see Richard and Sandy in the neighborhood in the summers and when we would house sit in our old house for the new owners but our relationship remained very casual. This summer that changed – and after 12 years we finally had a happy hour together with Richard and his new girlfriend Debbie. During our drinks together I mentioned that a friend was having a party and we moved our fun down the street. It was super fun getting to know our neighbor after all these years, meeting Debbie, and introducing him to some of our other friends in the ‘hood. Left to right – Paul, Greg, Richard, Debbie (Richard’s girlfriend), Jeanne, Debbie (hostess), and Tad. 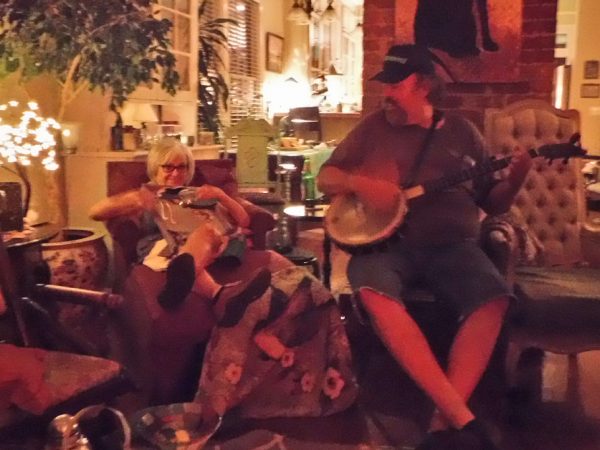 The party was actually a group birthday party as many friends in our group have birthdays in late July/early August. Ros (on the left) was one of the birthday celebrants. 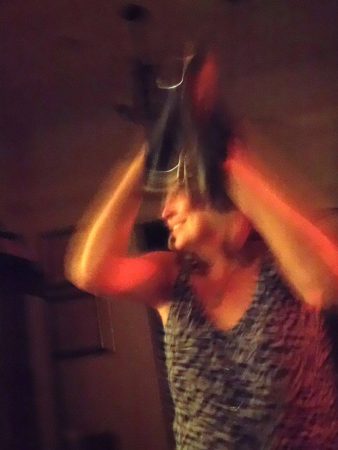 The spirit of Cabbageheads past live on. Debbie broke out the tap shoes of her late cousin Sarah Beth who lived in Cabbagetown for a short while after being displaced by hurricane Katrina in New Orleans. Sarah Beth was a popular street artist and dancer in the French Quarter. 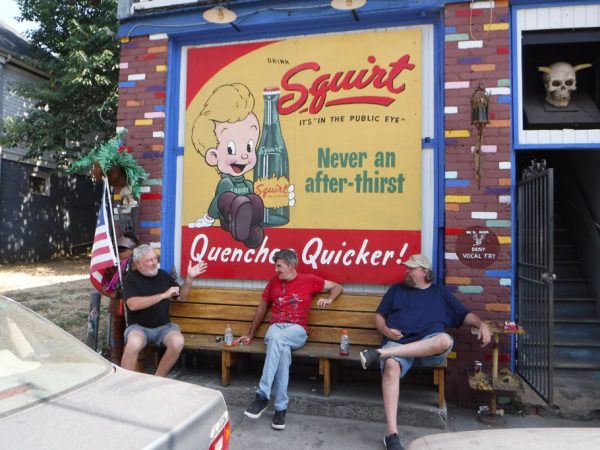 After Greg’s retirement from the painting business hanging out in front of the local Cabbagetown grocery/diner, Little’s, with his ex-partner Paul and Cabbagetown carpenter, Tad. 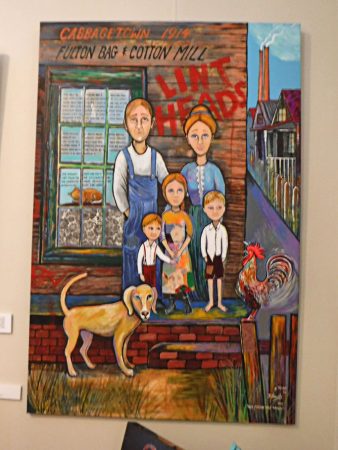 Cabbagetown like it was in the past is still a little village with a grocery store, restaurants, two parks, and its very own museum. The museum housed in a former Cabbagetown home, The Patchworks, was found and is run by a descendent of the founder of the Mill, Jake Elsas and his wife Nina. Pictured here is a depiction of Cabbagetown life by Cabbagetown resident and folk artist Donna Howells. 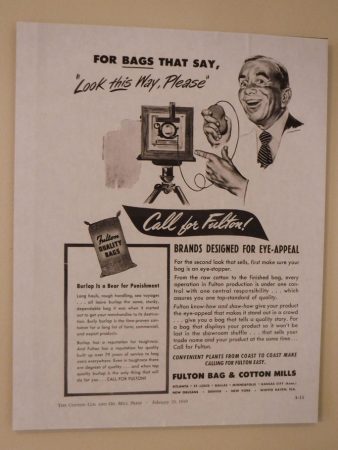 Greg and I had been to the museum many times for some of their many live music programs. In fact Greg played in one of those programs last year. But we hadn’t really taken time to look at the many exhibits. So on one of last few days in the ‘hood we decided to take it all in. 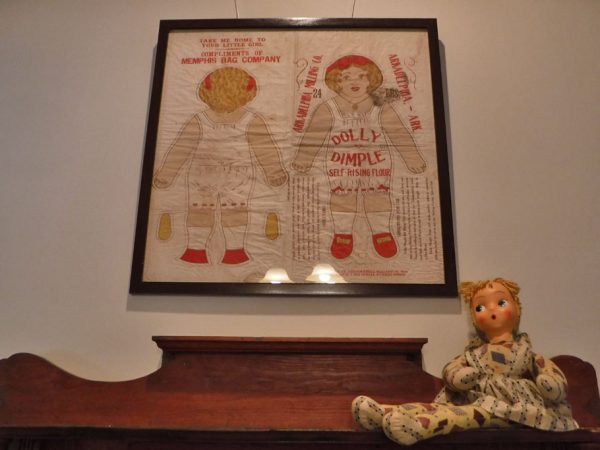 One of the fun exhibits in the museum was this framed cotton bag. Not only were cotton bags made to hold goods they were made to be reused. This bag was meant to be converted into a doll. 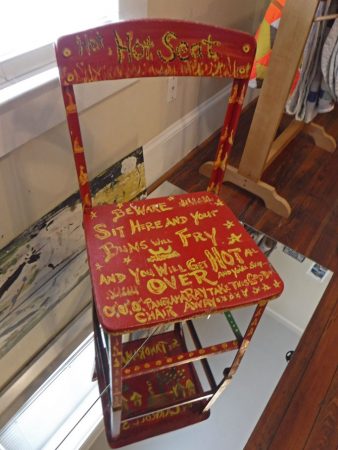 Patchworks covers more than just the history of the mill. Many artists and noted musicians once live in Cabbagetown. This piece is by the ledgendary photographer and folk artist Panorama Ray. 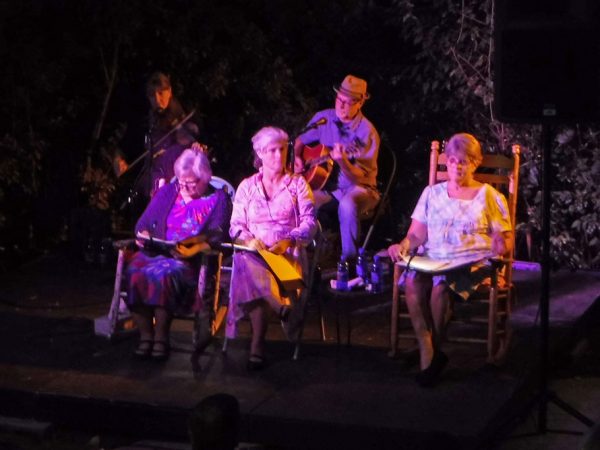 The heart and sole of Cabbagetown is its people. The Fulton Bag and Cotton Mill was operational from 1868 until 1978. The people who came to live in the neighborhood and work in the mill were a tight-knit community from rural Georgia and the Appalachian Mountains. In the 1970s the stories of three Cabbagetown women were written down and turned into a play. This play was reprised this summer in Cabbagetown Park. The starring roles went to three life long residents and Cabbagetown treasures, Sarah and her daughters Karen and Kim. 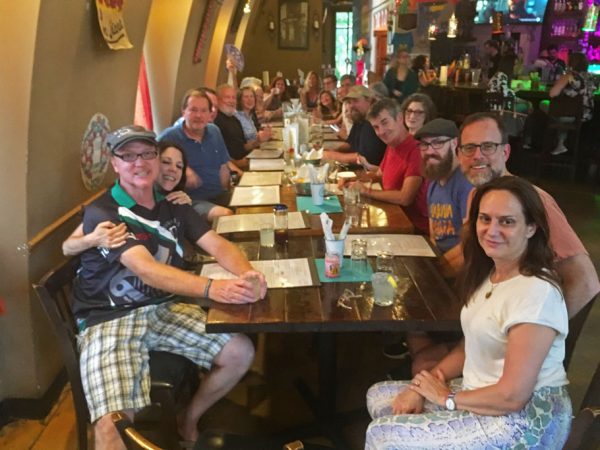