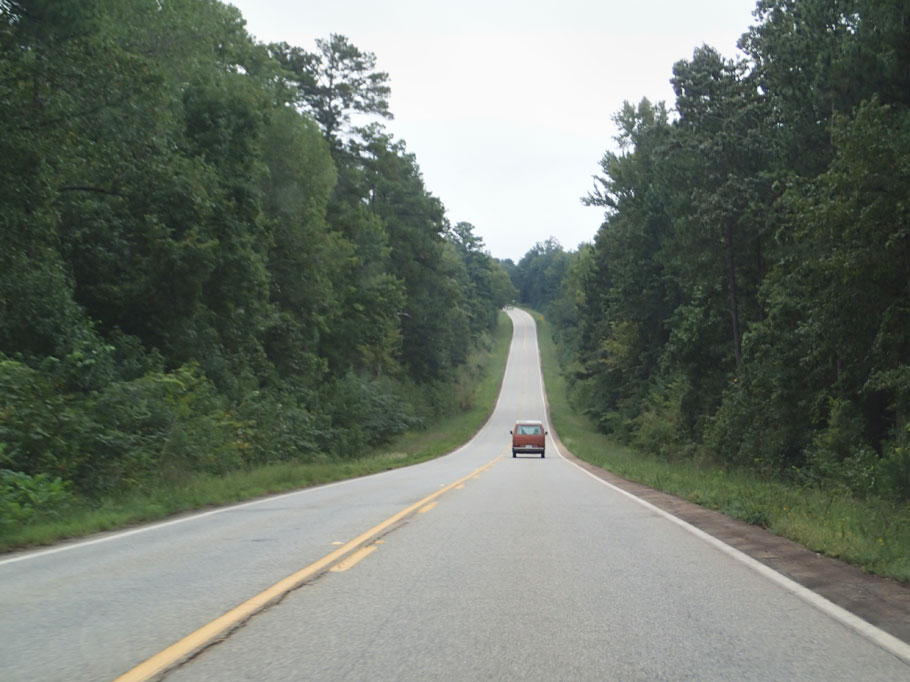 Down the road in Georgia.

Through the back window of The Great Aâ€™Tuinâ€™s cozy interior we see flashing blue lights speeding towards us to where we are parked in the Pilot parking lot in St. Augustine Florida. We step outside as two policemen exit two police vehicles stopped at the rear of the van. This is our first experience at truck stop boon docking. The information we found on the web indicated that it was OK for us to spend the night here, but now I am worried that we are in the wrong place or something worse. â€œWeâ€™ve had a report of suspicious activity over here,â€ they tell us. Greg tells them that we have not seen anything except a guy walking his dog. They want to know who owns the Honda Civic parked next to the van. We explain that I am driving Honda and Greg is driving the Vanagon, and that we were just sitting down to dinner in the van. The encounter is brief. Maybe it was our innocent looking faces or the fortune of our birth, but they didnâ€™t ask anything else, they didnâ€™t look in the van where they would have found an open container of beer, they didnâ€™t ask for our driverâ€™s licenses (Greg didnâ€™t have his), and they didnâ€™t run the vanâ€™s license plate, which didnâ€™t have any registration stickers, and was not registered to us. Luckily, they got back in their cars and drove back across the parking lot.

Now the police may have not been very curious as to why we were camped out with two cars in a truck stop parking lot, but I know that you, reader, if you have read thus far, probably are and may be wondering why were in Florida, where was Gregâ€™s driverâ€™s license, why we were each driving a car, and why our new van was not registered to us?

Why were we in Florida and why wasn’t the van register to us?

Last summer we sold our house and joined the ranks of those without an official residence (you know, the homeless). We are fortunate because we chose this existence and do not have all of the obvious difficulties of those whose circumstances were chosen for them, but still being without a permanent residence is not as easy as it seems. Although, in this age with a computer and the internet we can receive all of our bills and pay them, do all our banking, and can keep in touch with all of our friends and family online, there are still many things for which one needs an actual address to be a real citizen in todayâ€™s world, like getting a driverâ€™s license, voting, and registering a vehicle.

So since we were no longer Georgia property owners and needed to tell the government we lived somewhere, we decided to establish residency in Florida. In May we contracted with a mailbox service, St. Brendanâ€™s Isle in Green Cove Springs, FL. They gave us an actual street address (as opposed to the PO box). In June we went to a social security office to have our lost SS cards replaced. We changed the mailing address for all of our financial documents. We submitted a declaration of domicile and registered to vote in Florida. And finally, at the end of July, we drove the Civic to Green Cove Springs, collected all our documents from our box at St. Brendanâ€™s Isle, went to the DMV, and got Florida driverâ€™s licenses. Yippee! We were now legal in Florida and once we got a van we would bring it down and sign it up with Florida too!

Why two cars and where was Gregâ€™s driverâ€™s license?

The three weeks we had set aside between house sitting gigs to bring The Great Aâ€™Tuin to Florida got eaten up in the garage. Fresh from the mechanic we were unsure of Aâ€™Tâ€™s readiness for such a long trip, so we decided to take two cars in case the van wasnâ€™t really up for it. We also ruled out taking the highway, which would make it a two-day trip, but hopefully a safer trip if The Great Aâ€™Tuin couldnâ€™t keep up with the other cars on the road.

The day started off well. Then we made our first stop to get gas. Here we discovered our first two problems. Greg did not have his wallet (thus the missing driverâ€™s license). He figured he had left it at either our friendâ€™s house where we were staying, or the gas station where he got ice that morning. We were way too far away from Atlanta by then to turn back, so we used my credit card to fill up Aâ€™Tâ€™s tank, which led to the discovery of our second problem.

The fuel tank leak we were told by the mechanic was mostly solved, was not solved at all. While Greg was fueling up, diesel started pouring out from under the van onto the concrete. As we rush to our vehicles to speed away from our little â€œValdezâ€ a friendly guy in the parking lot stopped to tell how lucky we are to have such a cool van. Oh yeah, weâ€™re made of luck!

After a few phone calls back and forth Gregâ€™s wallet was located in the safe hands of the manager of the gas station where it was left. Yay, what good luck! Next fuel stop, our phone tumbled from the van and cracked on the pavement. Ugh, what bad luck! But by good fortune the phone still worked which was extra lucky because we got lost going through Jacksonville and needed Google maps and the nice voice of the map lady to get us through the city and, then as darkness fell, through all of the millions of turns it took us to get to the truck stop.

It was a long hard day and despite our police interaction it was great to finally be at the Pilot. After dinner we pulled out the vanâ€™s back seat to make our bed. It was buggy, so we closed up the van tight, locking in all of the humid Florida air. We slept little, tossing and turning on sweaty sheets, but it was good to lie down and put this eventful day to rest. Our luck hadnâ€™t been great, but it was hanging in there.

This was the good day. 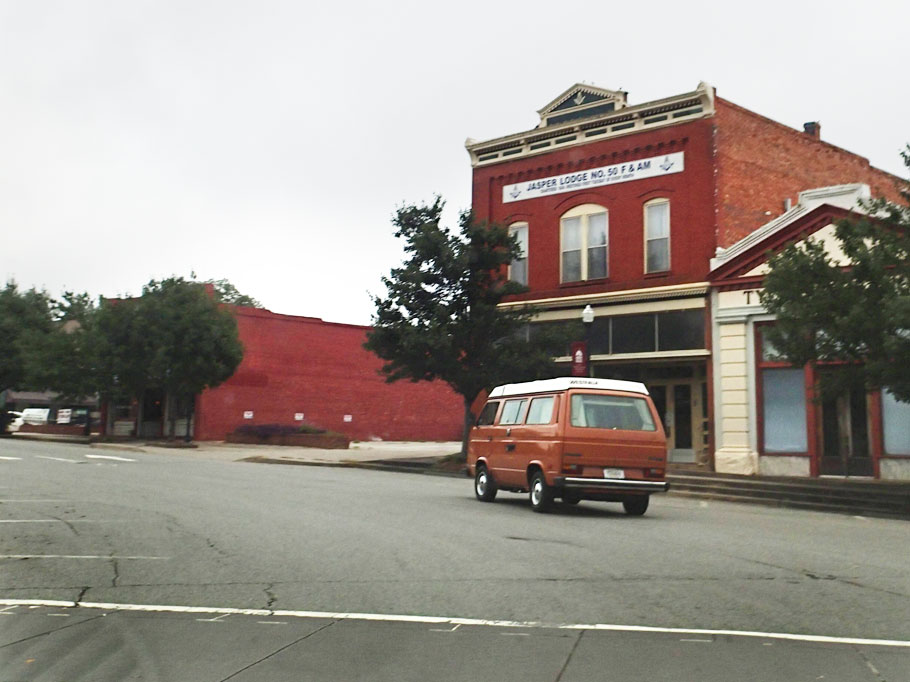 Driving through a small town in Georgia. 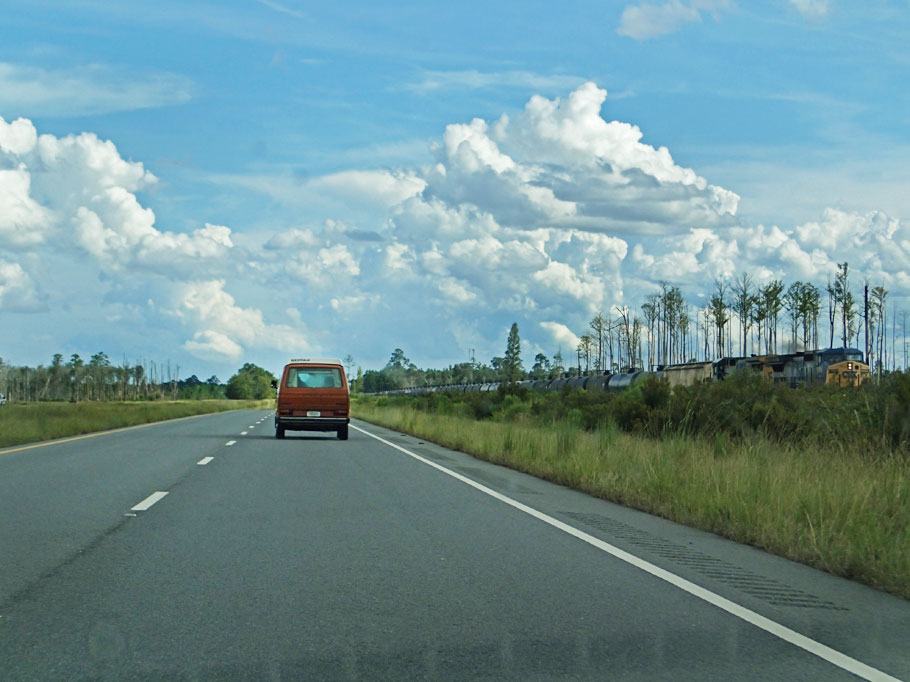 Driving through the Okefenokee Swamp. 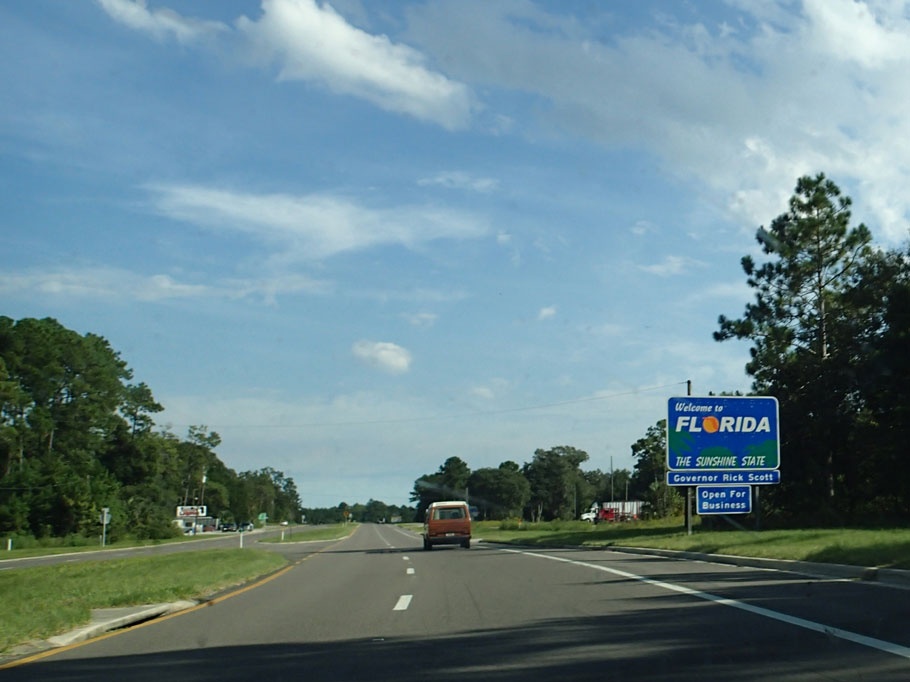 8 thoughts on “Shake Down Cruise Day 1”