A short dinghy ride north from the northernmost anchorage and mooring field at Hawksbill Cay takes you around a nub of the island and to a small beach with a trail to the Russell Ruins. The Russell family were loyalists who were given a grant to settle on the Cay by The Crown in 1785. The terrain is harsh and rocky with low-lying scraggly bushes and trees. If you hike up the trail you will come to the remains of small one-room stone houses nestled in between dense vegetation. You will also find a beehive oven used for cooking and for incinerating conch shells used for making the mortar to line the walls of the homes. Strewn around the oven are piles of conch and other shells, many charred black. There are also tamarind trees and natural cisterns, now mostly dry.

Now, I understand the idea of adventure, the want to scratch out one’s own existence, and the need to have a little bit of this earth to call one’s own. But I can’t understand why anyone would want to leave the lush coast of a seemingly endless North America, teeming with new ideas and cast with a growing vibrant population to come to an isolated rock in the middle of nowhere. Were they that loyal to The Crown, persecuted by their neighbors, or just obstinate to any kind of change that they didn’t initiate? 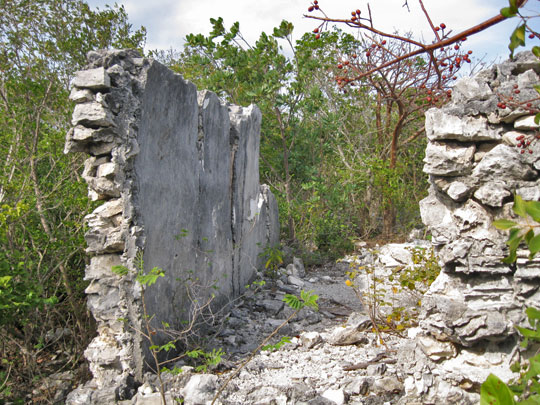 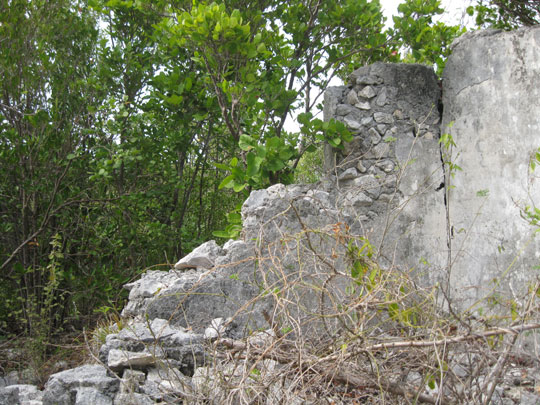 From the beach, as you head up to the trail before you reach the sign directing you to the Russell Ruins, there is a trail to the left. This trail most likely leads to the beach, but we didn’t follow it that far. I decided to turn around shortly after we saw the snake. We did follow it far enough to encounter another crumbling building. Stacked up on top of one wall of the house were artifacts, bottles, and decoratively painted pieces of pottery.

I imagine the women of the Russell family setting a lovely table for dinner in their one-room shack with all of their finery brought from England via the Colonies, wondering if it was true love, madness, or bad luck that brought them to such a place.

Apparently, Hawksbill Cay was occupied until 1900 when the last resident, the husband of a granddaughter of the original Russell family, perished on the island. For 115 years the Russell family and descendants farmed this cay and eventually every cay within a day’s sail. They eked out an existence and lived a life uniquely their own, loyal to a monarchy so benevolent to bestow upon them a beautiful rock in the middle of nowhere.